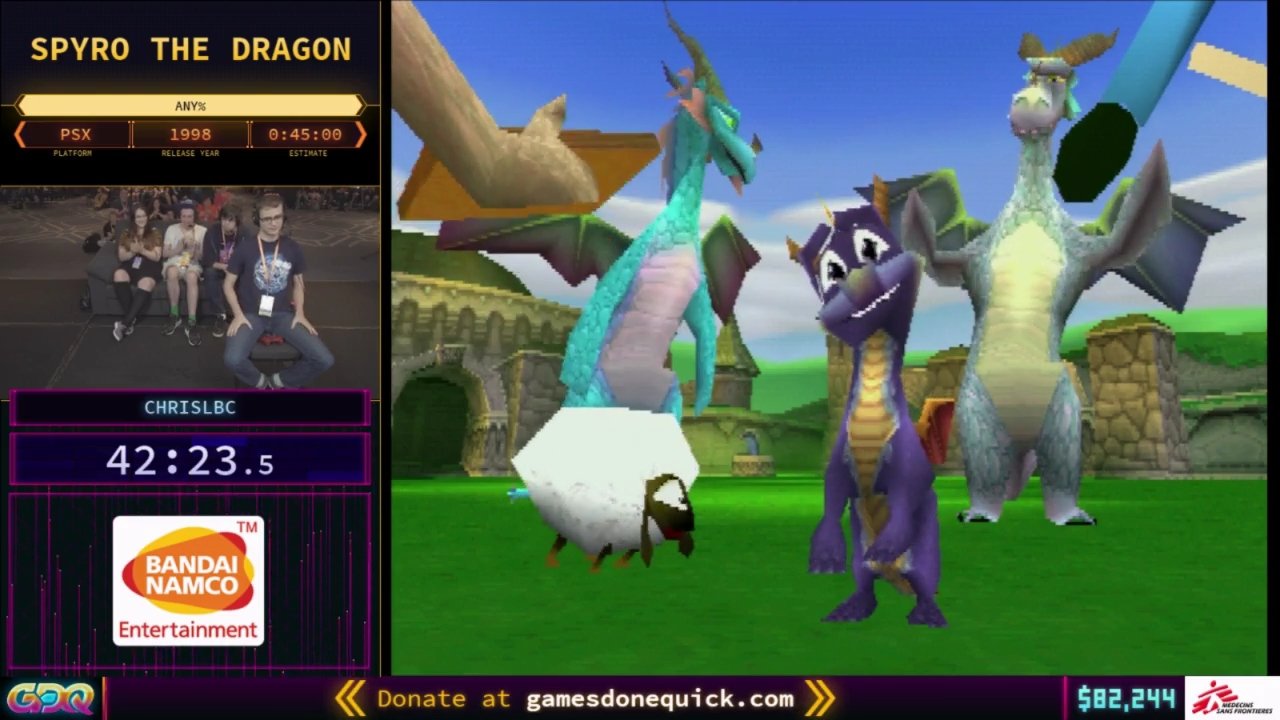 Day one of SGDQ 2018 was full of amazing runs, spread across a great variety of games.  We saw some classic action games, some spectacular indies, and some long running speed run staples.  There’s still five days of fun and exciting speed runs left, but let’s take a look at the best runs that SGDQ 2018’s first day had to offer. 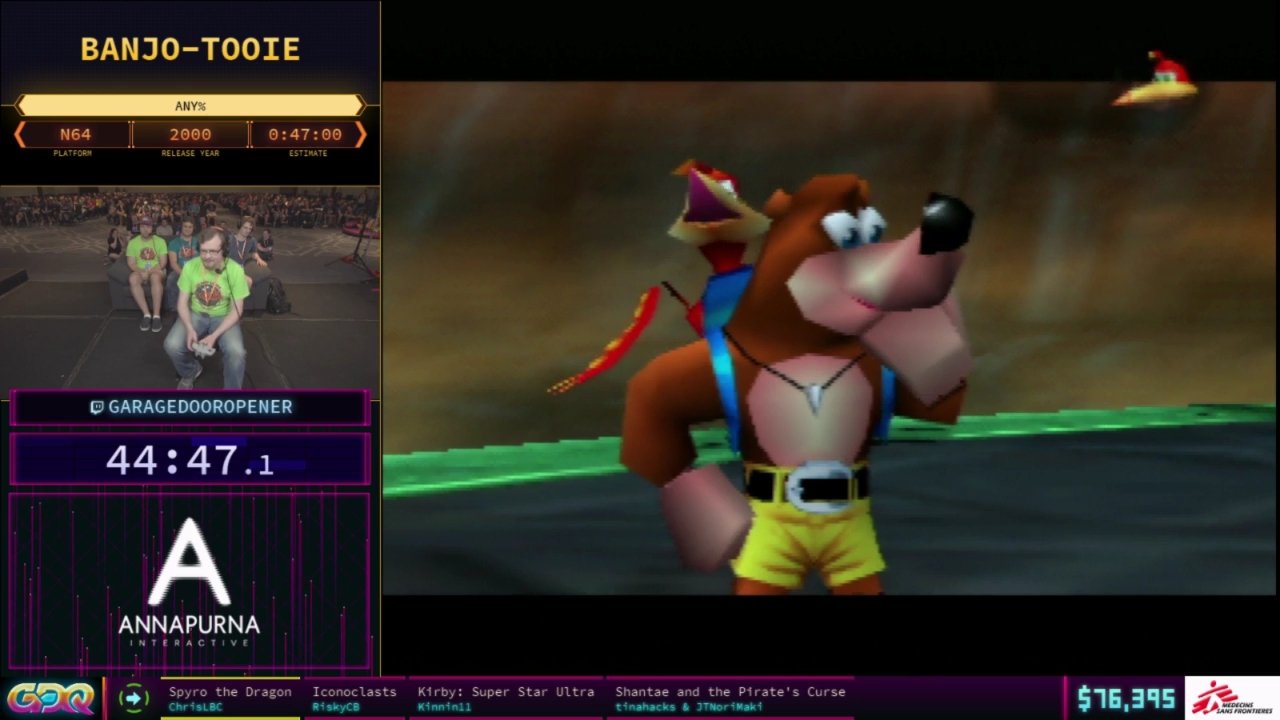 Spyro the Dragon (any%) by ChrisLBC

With the upcoming release of the Spyro: Reignited Trilogy, I was super excited to check out this run.  If you’ve ever played Spyro the Dragon, you’re probably pretty familiar with how easy it is to charge off edges or accidentally overshoot jumps.  Runner ChrisLBC absolutely demolished this PS1 classic, showcasing an impressive amount of speed in his character movement and expertly timed attacks.  The most impressive stuff in the run are arguably the flight levels, which are well known for their difficulty. 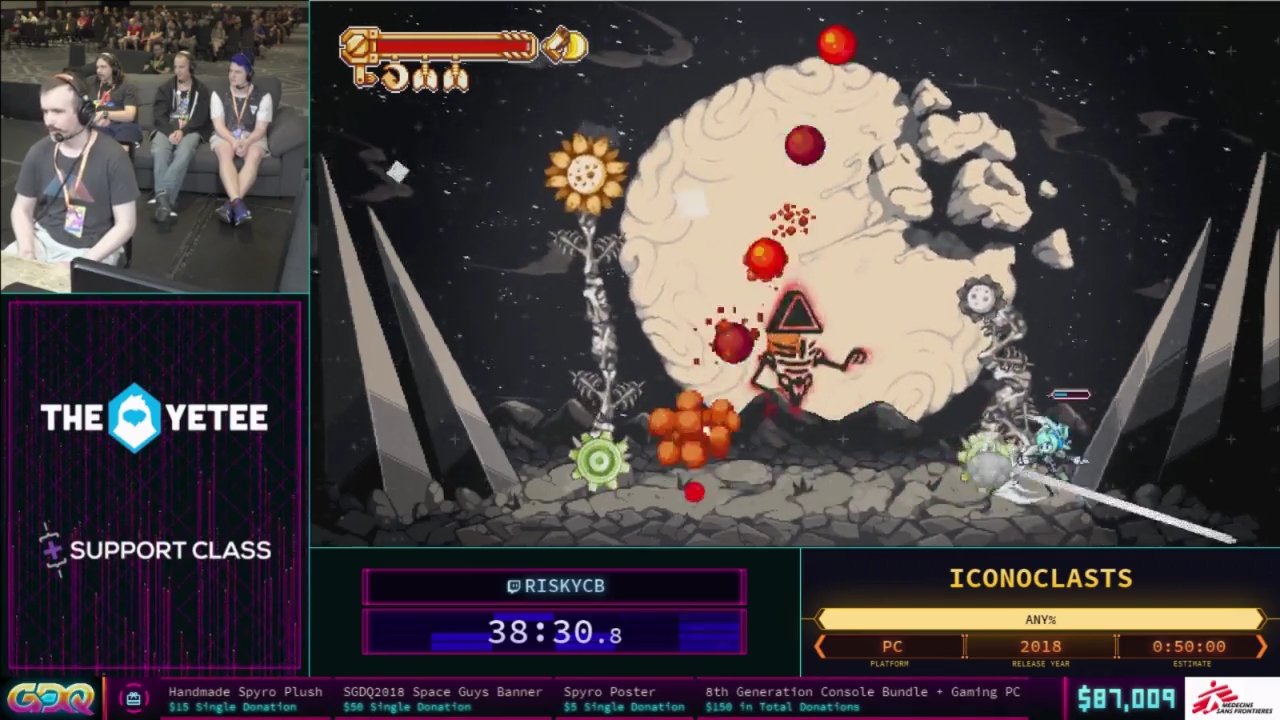 This was a surprising run for me, as I hadn’t seen any gameplay of Iconoclasts until this run.  The game is a colorful sidescrolling shooter, and plays kind of like a faster version of Mega Man with more puzzles.  This run had tons of really cool movement optimization, some fun frame perfect tricks, and a section where the runner completed a puzzle without looking at the screen.  There are also some really cool out of bounds tricks as well as some absolutely clutch moments.

Shantae and the Pirate’s Curse (race) by Tinahacks and JTNoriMaki 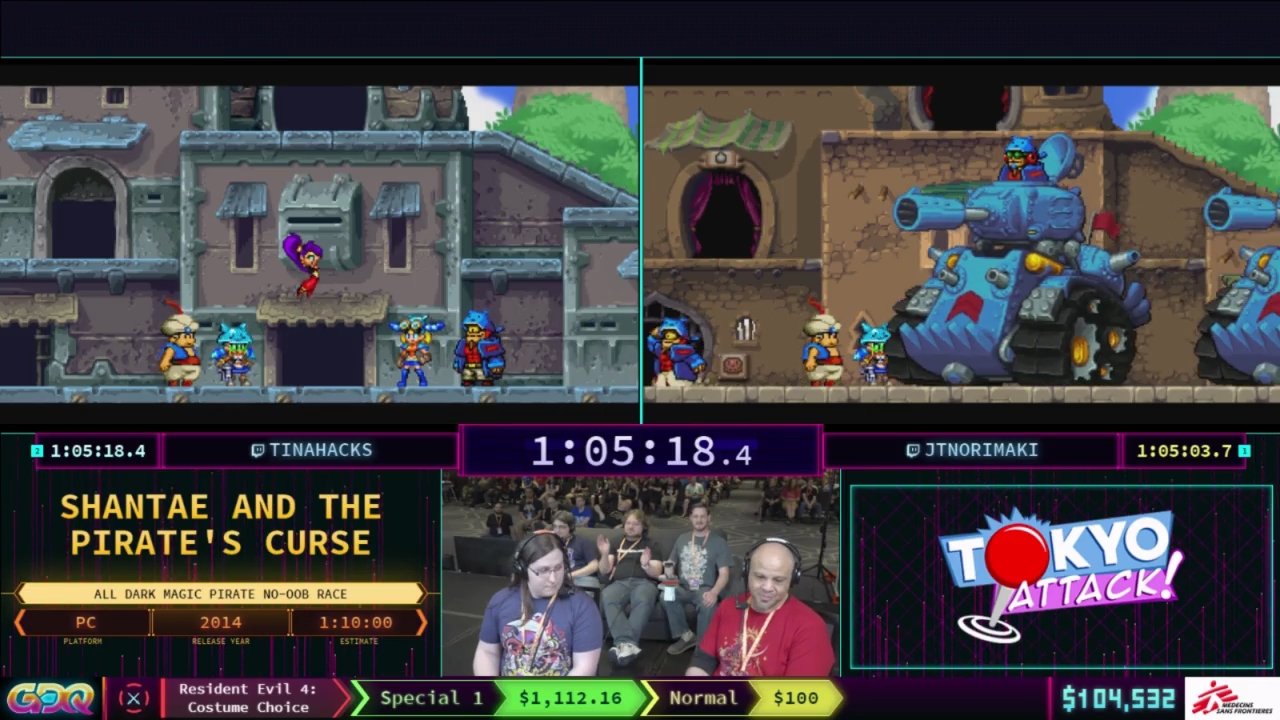 Shantae was an excellent race between TinaHacks and JCNoriMaki, and it came down to the absolute wire.  The race was back and forth throughout most of the hour-long run, as both runners expertly showed off their mastery of the game’s various platforming and combat mechanics.  Both runners took different routes through the game, so it was hard to keep track of who was winning at any given point. However, when the two runners finally converged at the end boss, it resulted in one of the most surprising victories I’ve seen at a GDQ in years.

The Legend of Zelda: Majora’s Mask 3D by gymnast86 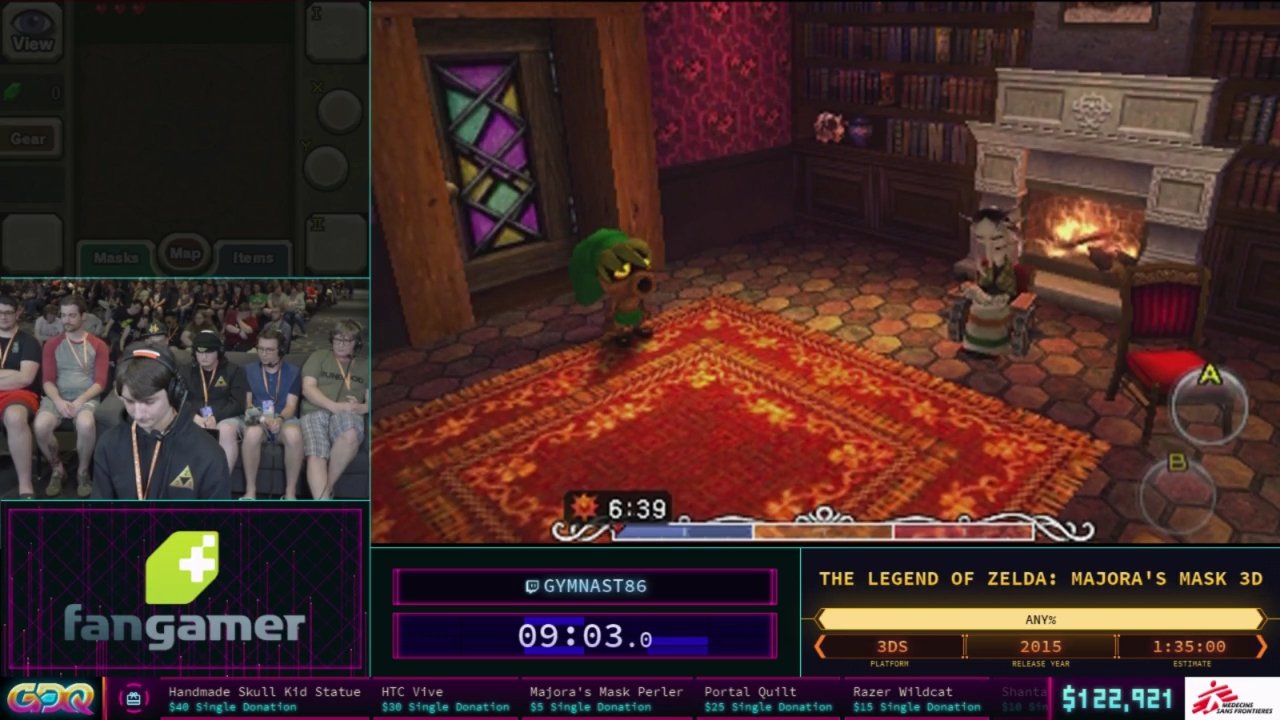 This run was hugely different from the N64 run, which was a pleasure to watch.  Runner gymnast86 showed off a multitude of unique tricks, traveling back and forth in time and clipping out of bounds with ease.  With so many different aspects of the game to manage, gymnast86 made it look easy.  For any Zelda fan, this Majora’s Mask run will shatter your expectations. 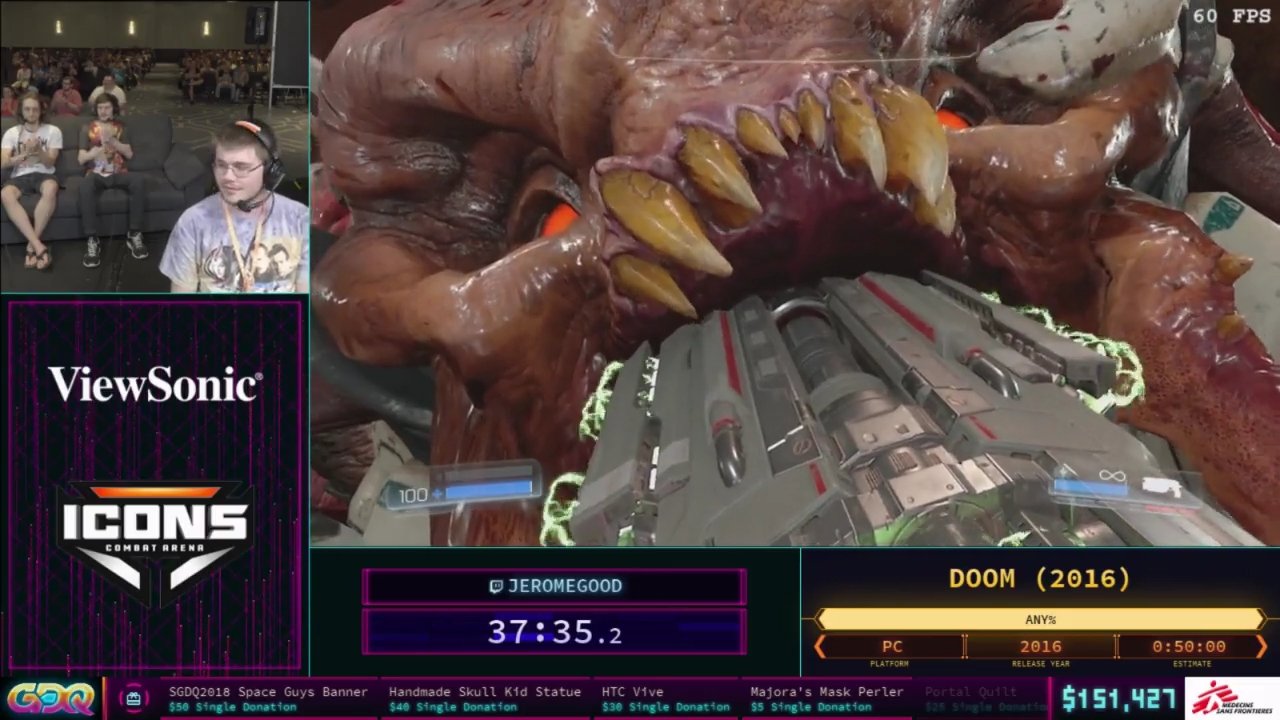 Words cannot accurately detail how fast and impressive this run of DOOM was.  Compared to the last appearance of DOOM at GDQ, this run was incredibly faster, thanks to the unique tricks that the runner was able to pull off.  Playing on PC at 200FPS, runner Jeromegood was able to pull off some insane tricks, ejecting himself out of bounds and quickly across multiple levels.  While there was plenty of ripping and tearing, a good portion of the run was spent out of bounds.  If you’ve ever seen DOOM played, you’ll want to watch this run. 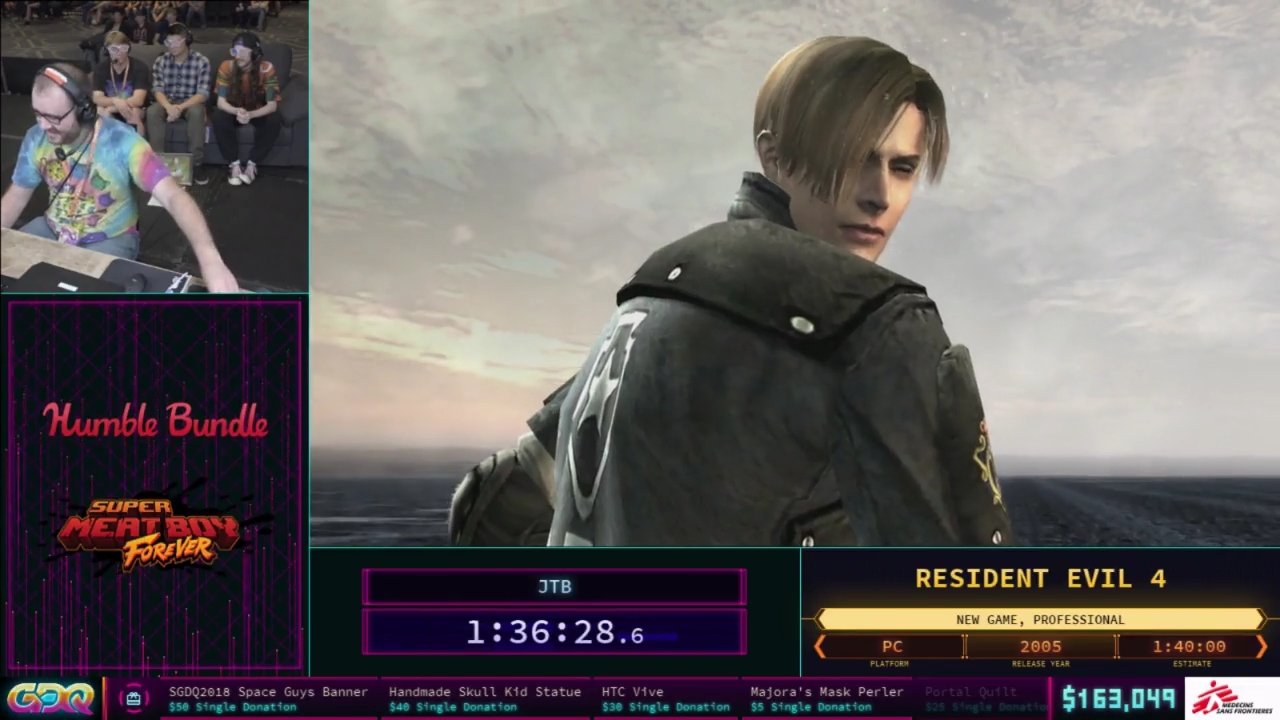 JTB is an absolute god at Resident Evil 4, and this run proved that.  Starting out on the hardest difficulty with no extra weapons or boosts, JTB escorted Leon and Ashley through the treacherous campaign with ease.  With little room for error, he navigated past countless zombies in a nail-biting run that was more suspenseful than my original playthrough of the game.  Watching JTB puts my skills to shame, and I wouldn’t have it any other way.

That’s all for day one!  At the end of the day, SGDQ 2018 had raises over $160,000 towards the charity Doctors Without Borders.  At this rate, they might blast through the previous record set by AGDQ 2018, $2.2 million.  We’re super excited for more amazing runs throughout the week, so be sure to check back here and follow our Twitter (@official90skid)!