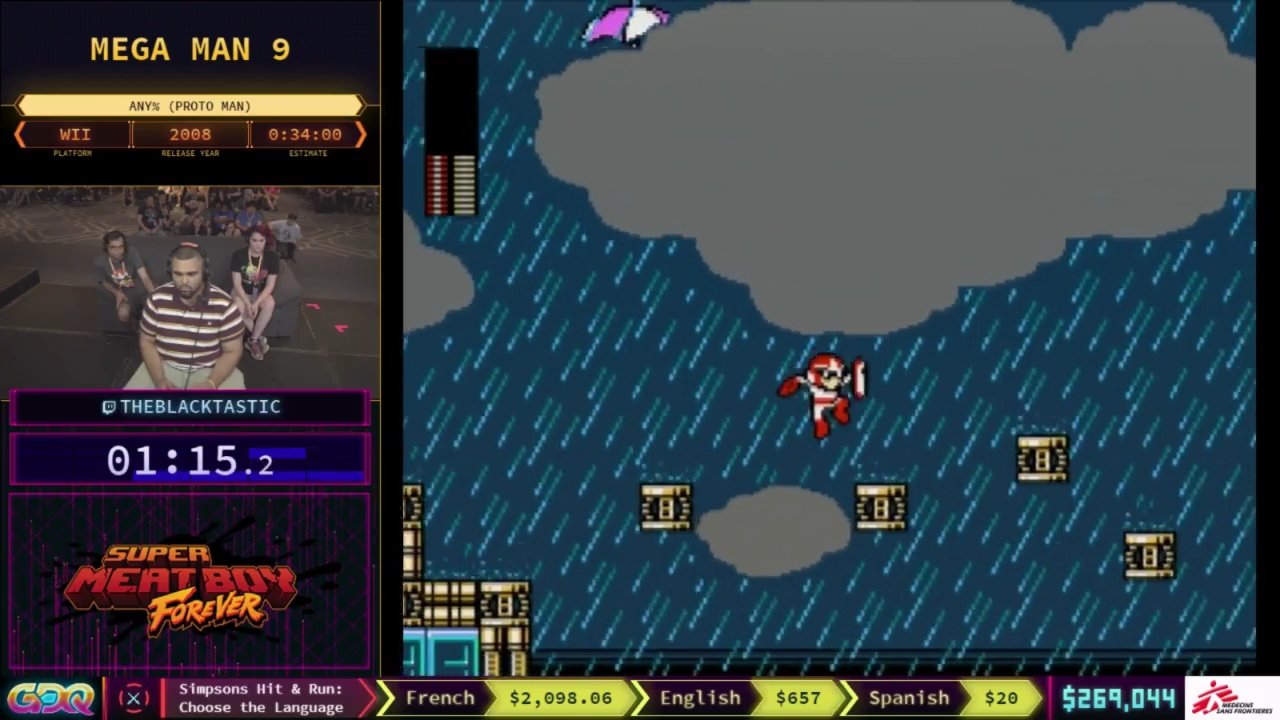 The second day of SGDQ 2018 had plenty of variety, with the early morning featuring some tough action classics.  The Mega Man block had some truly great runs, and there was plenty of Super Nintendo to go around.  There’s still four more days of speedrunning, so the fun has just begun!  Be sure to check out the rest of the schedule HERE, and tune in live at any time over at twitch.tv/gamesdonequick!

So far, SGDQ 2018 has managed to raise just over $300,000 for Doctors Without Borders, a charity that brings medical help to those in need.  The donations are pouring in, and we just might see a new record for the highest donation total in GDQ history! 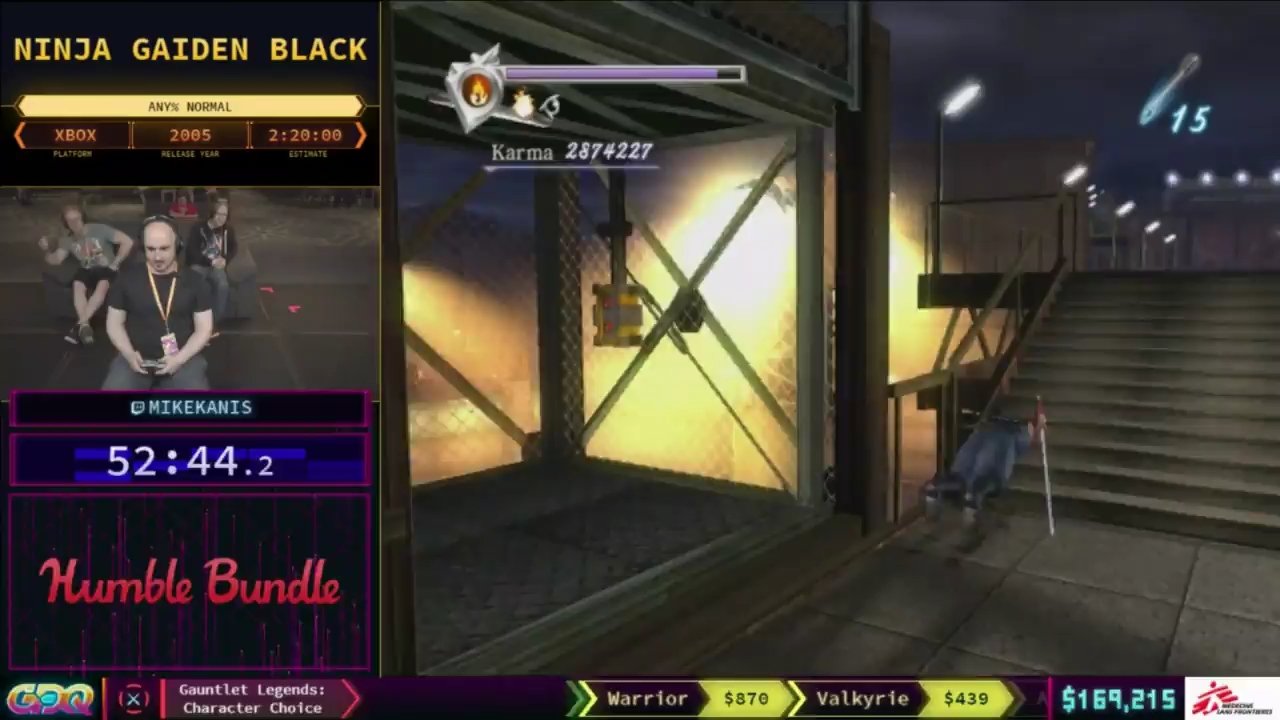 Ninja Gaiden Black is a tough game.  Before people had Dark Souls to point to, Ninja Gaiden Black was often referred to as one of the hardest games of all time.  When I first played it, I struggled to even make it past the first few stages.  Imagine how satisfying it was then, to watch runner MikeKanis tear through the game in under 2 hours.  There’s some decent tricks in the mix, but most of the run came down to pure sword and evasion skill.  My personal highlight was the various boss fights, which required deft movement and pattern recognition. 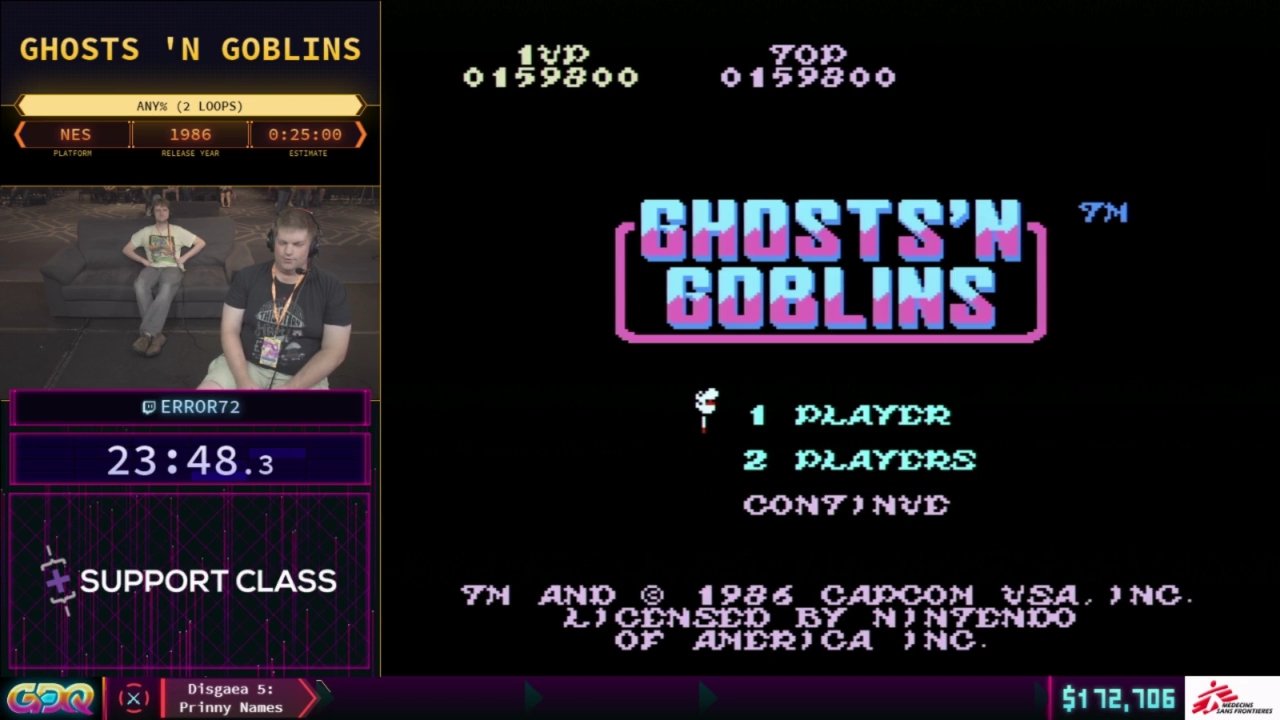 This run continued the theme of soul crushing difficulty by giving us a look at the entirety of Ghosts ‘N Goblins. This is an experience I never thought I’d have, after failing to make a dent in the original NES game in my childhood.  Runner ERROR72 made the game look like a cakewalk, hopping from platform to platform and dodging enemies with ease.  It was hugely entertaining to see him stroll through such a chaotic and hectic game.  The fact that he did this glitchless, without utilizing any safety ensuring tricks, made it that much more impressive. 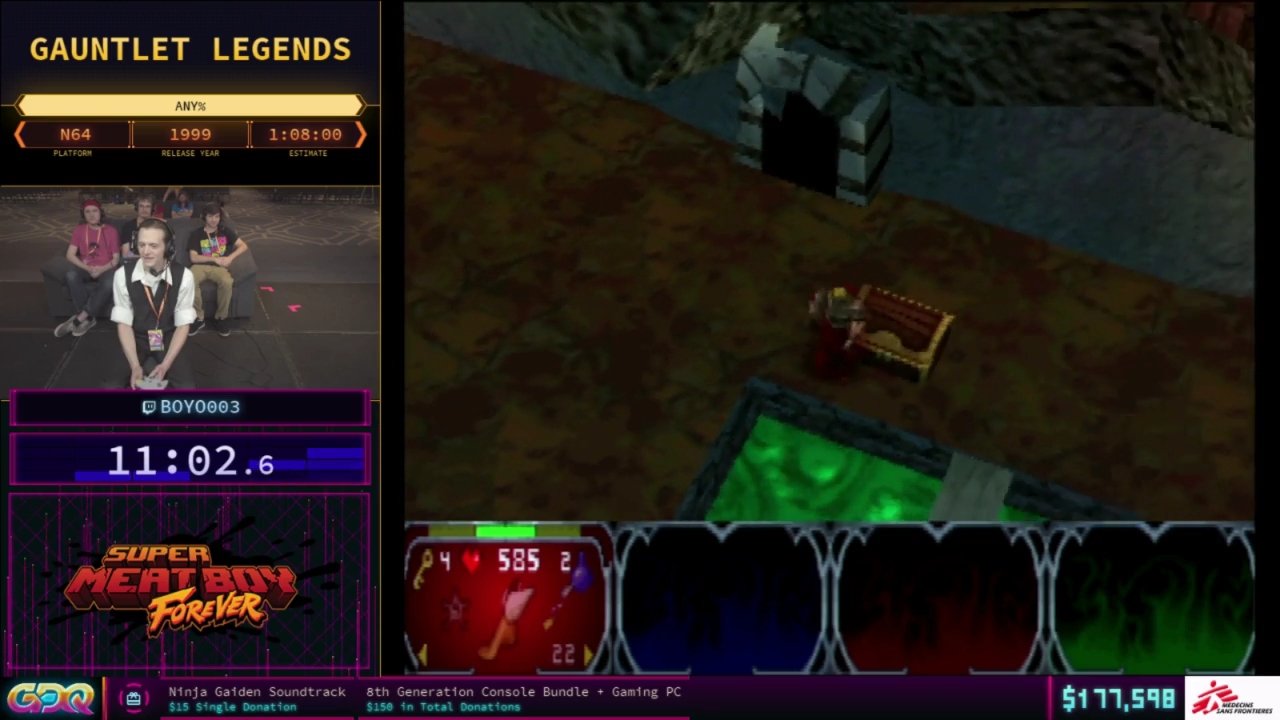 If you’ve ever played Gauntlet Legendsbefore, you know how annoying the massive hordes of damaging enemies can be.  This run was insanely enjoyable due to one major trick, which Boyo0003 pulled off by manipulating the “time freeze” magic.  This allowed him to roam through every level while the enemies were permanently frozen in time.  This turns Gauntlet Legends from a hack ‘n slash into a fast-paced game of collecting items and unlocking gates.  If you’ve ever spent countless hours bashing your head against a Gauntlet level, this is a highly recommended run.

Enter the Gungeon (1 character) by teddyras 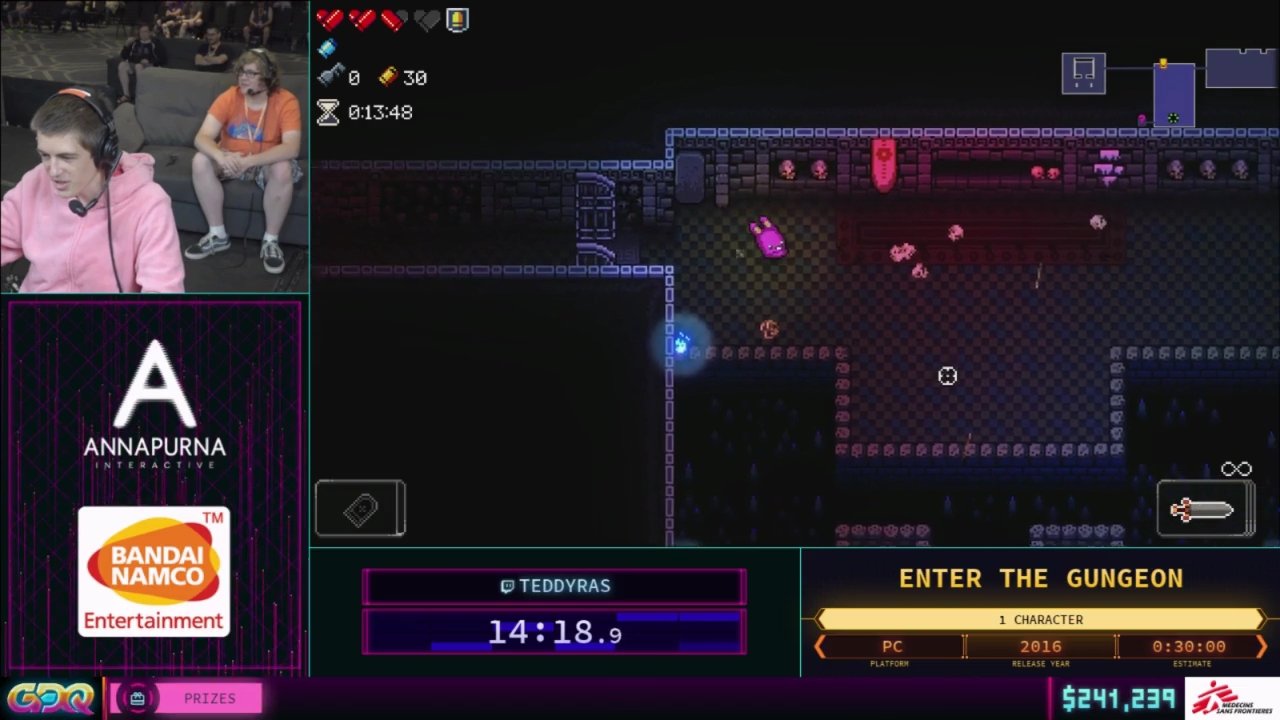 Enter the Gungeon is a fun and cartoonish roguelike, and it’s also incredibly tough.  Watching runner teddyras blast his way through this insane gun-fetish twin stick shooter was not only very impressive, but entertaining as hell.  The quality commentary and fun personality of both the runner and the couch made for a comfortable and humorous run.  Despite a few mistakes, the run went quite well, and we got a good look at a couple of the game’s many bosses.  The run ends so quick, you barely get to see the plethora of content available.  If anything, it’s a great introduction to the fantastic game.  We highly recommend you pick up the game, which is available on PC and plenty of other consoles. 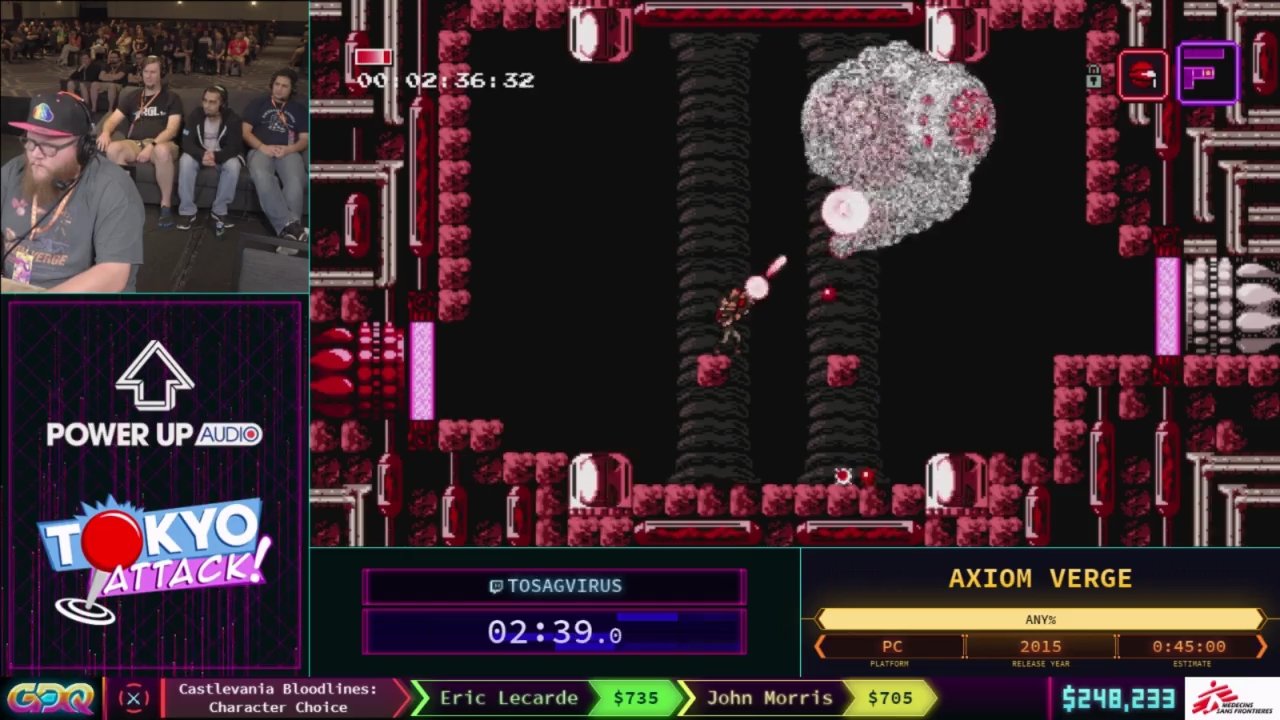 Axiom Verge is one of my favorite indie games, as it was handcrafted by one single developer, Thomas Happ.  It also heavily borrows from some of my favorite classic games, namely Metroid.  The game also has a built-in speedrun mode, and Thomas Happ even fine tuned the game to make it more accessible and enjoyable for speed runners.  In many ways, this run was a sort of redemption for Axiom Verge, as it had a less than optimal showing at a previous GDQ event.  As the runner focused and plowed through the twisting halls and enemy filled caverns, the couch provided excellent commentary and explained the game’s tricks well.  Simply put, this is an all-around great run to watch that showcases a fantastic sidescrolling shooter.

Mega Man 9 by The Blacktastic

This Mega Man run didn’t feature the blue bomber, but instead Proto Man.  Runner The Blacktastic played through a special mode of Mega Man 9 when he was able to play as Proto Man, which unlocks some useful moves right from the start.  However, this mode is super difficult, as Proto Man takes double damage.  It’s no secret that Mega Man 9 is a brutally difficult game, and despite playing in this even more difficult mode, The Blacktastic slide, blasted, and maneuvered his way through the game with ease.  There are few people who can impress me with their Mega Man skill, and The Blacktastic easily accomplished this just a few stages into his run. 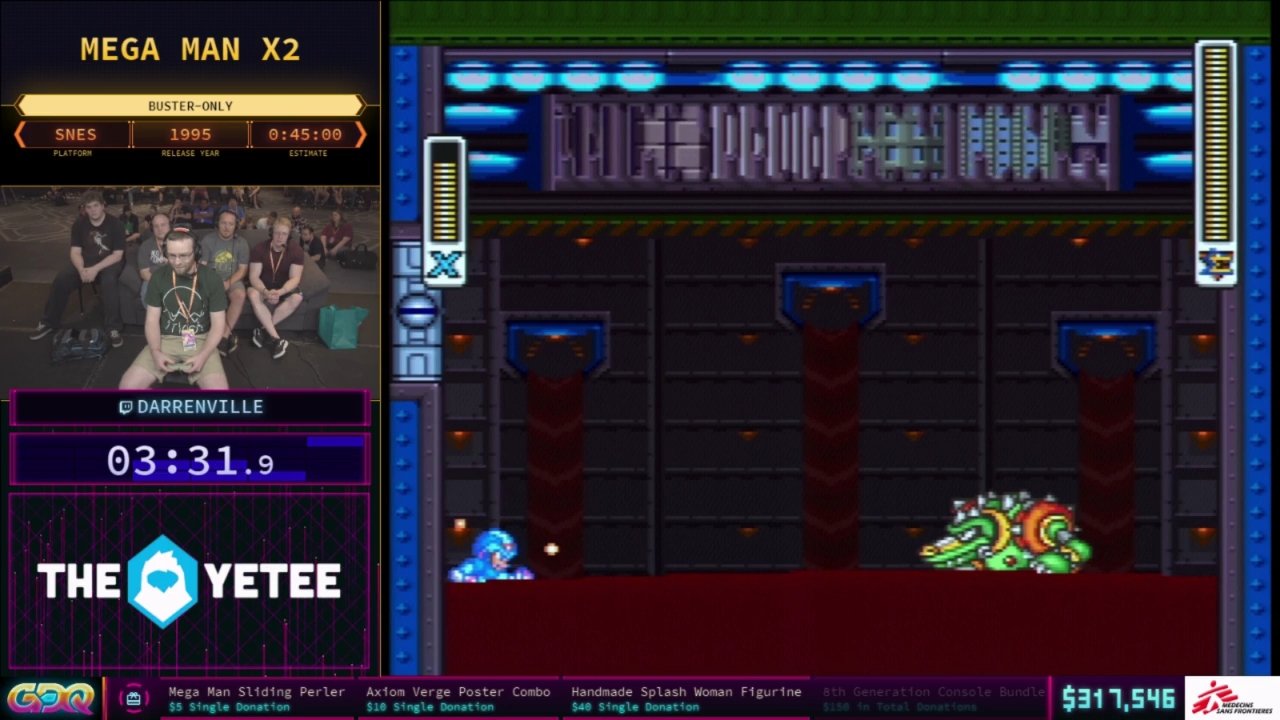 This run of the popular Super Nintendo classic was incredibly satisfying to watch, thanks to runner darrenville’s complete mastery over the movement tech.  What made this run even more interesting what that it was a “buster-only” run, meaning that darrenville killed every enemy and boss using only Mega Man’s standard buster.  While he struggled on one boss in particular and died a few times, for the most part the run was pretty flawless.  There weren’t all that many glitches or insane tricks, but just pure Mega Man X2 skill.

Rise of the Tomb Raider by Studio 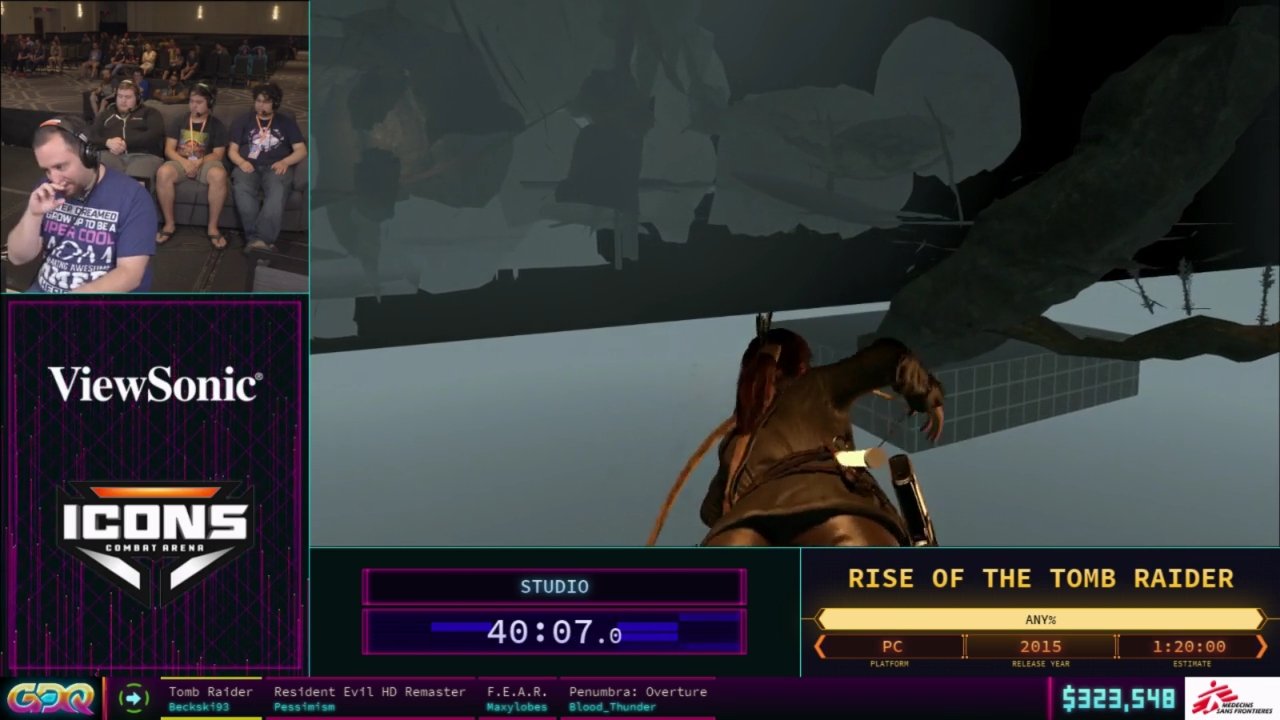 When I first saw the one hour and forty minute estimate for this game, I was unsure exactly how Studio would pull it off.  Considering The Rise of the Tomb Raider took me well over a dozen hours to complete on my first time, the prospect of beating it in the length of a feature film was astounding.  Studio showed us just how broken Tomb Raider is by consistently going out of bounds and snaking his way through the complex unloaded zones.  This often required some very tricky and unforgiving platform.  That, combined with some really fun glitches to move Lara in weird ways, made for a completely glitch-filled run that was awesome to watch.  A lot of the glitches were possible due to the high framerate you can get on a PC, which goes to show that sometimes, the frames really do matter.  Unfortunately, the run was disrupted by an unexpected crash.  Studio also failed a few tricks, costing precious time.  These factors caused Studio to go over his time estimate, but the run was still impressive as hell.  It’s fun to know that highly tested modern games can still be this broken.

That’s all for day two of SGDQ 2018!  Day three looks great, with awesome games to boot.  There’s the horror block, plenty of Castlevania, and tons of Metroid.  We’ll be watching too, so be sure to check back for more recaps or follow us on Twitter (@official90skid) for live updates!