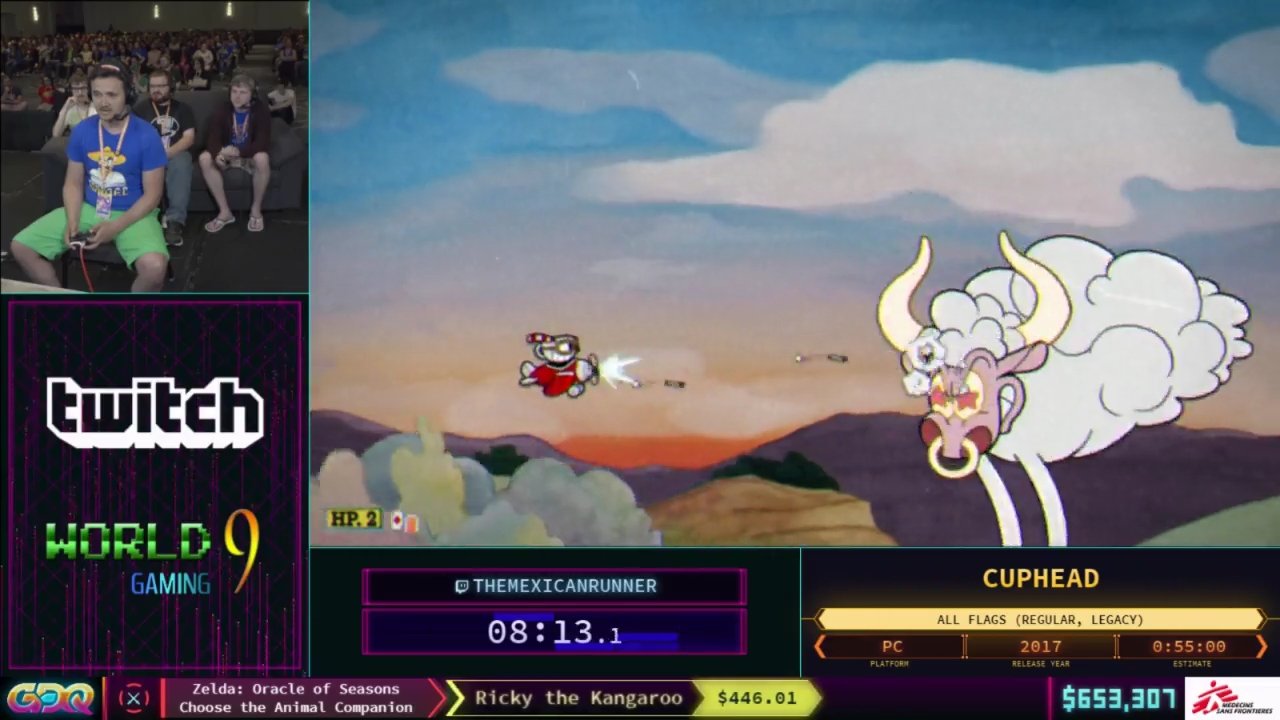 The fourth day of SGDQ started off with a lengthy Zelda speedrun, leading into a wide variety of games from Genesis to PC. The day closed off with some much anticipated runs, and it was generally a fun day full of runs. The really good stuff is still yet to come, with the Super Mario Brothers block set for tomorrow, as well as some huge runs over the weekend. There were still plenty of amazing runs from the fourth day, so if you’re looking for a fun speedrun to watch, why not check out one of my below recommendations? I wasn’t able to watch every single run, so you should definitely check out the full schedule to see what else was ran. With that said, let’s take a look at the best runs from SGDQ 2018 day four. 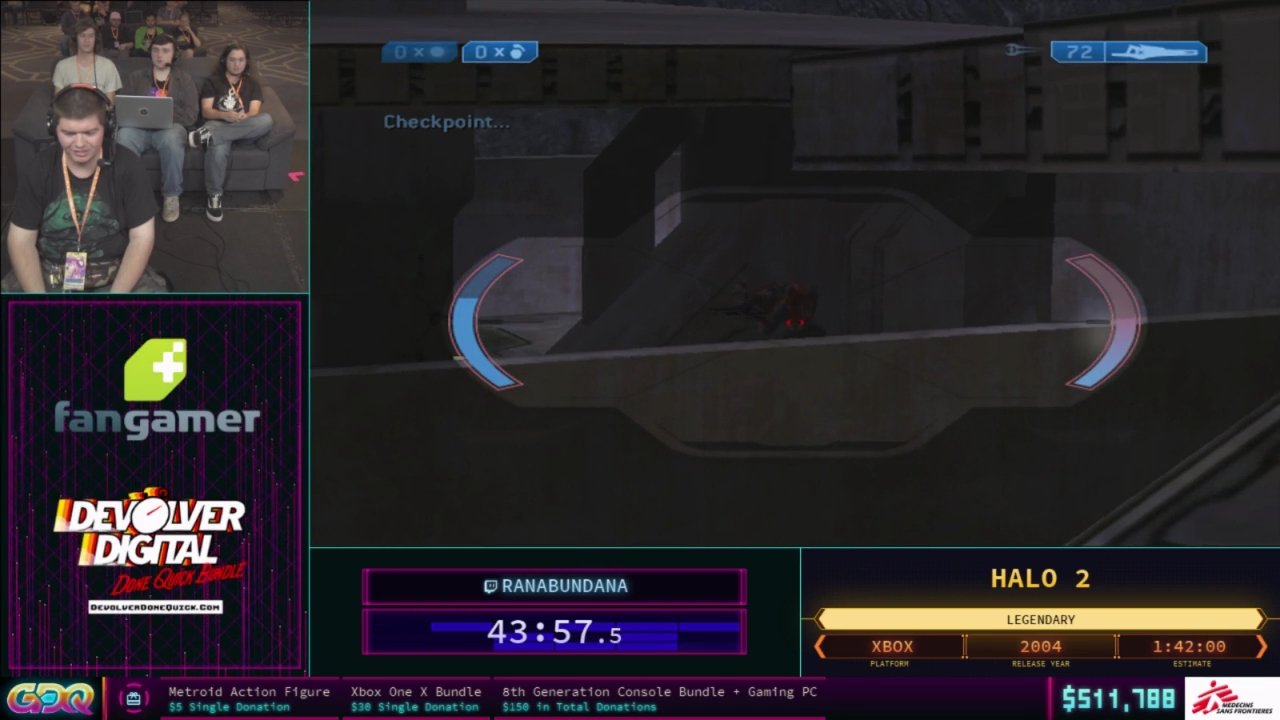 The Halo series is always great for speedruns involving fun tricks, out of bounds sections, and some truly tense moments. We’ve seen a large variation of Halo runs at past GDQ events, but there’s something fun about the purity of a Halo 2 Legendary run. This run is full of fun grenade jumps and glitches, and the runner usually pulled them off on their first try. Coming from a competitive Halo 2 background, I can assure you that doing a sword cancel off of a rocket launcher is a tough maneuver, and it’s one that this runner nailed several times in a row without batting an eye. Perhaps the best trick of the entire run was one that involved getting underneath a Flood enemy, and then gaining altitude by canceling melee attacks which pushes you through the air. The runner had to navigate essentially blind while slowly flying up to the spot that would trigger the next chapter. It’s a truly remarkable and ridiculous trick that only a few runners can even attempt, and his execution was awesome to see. 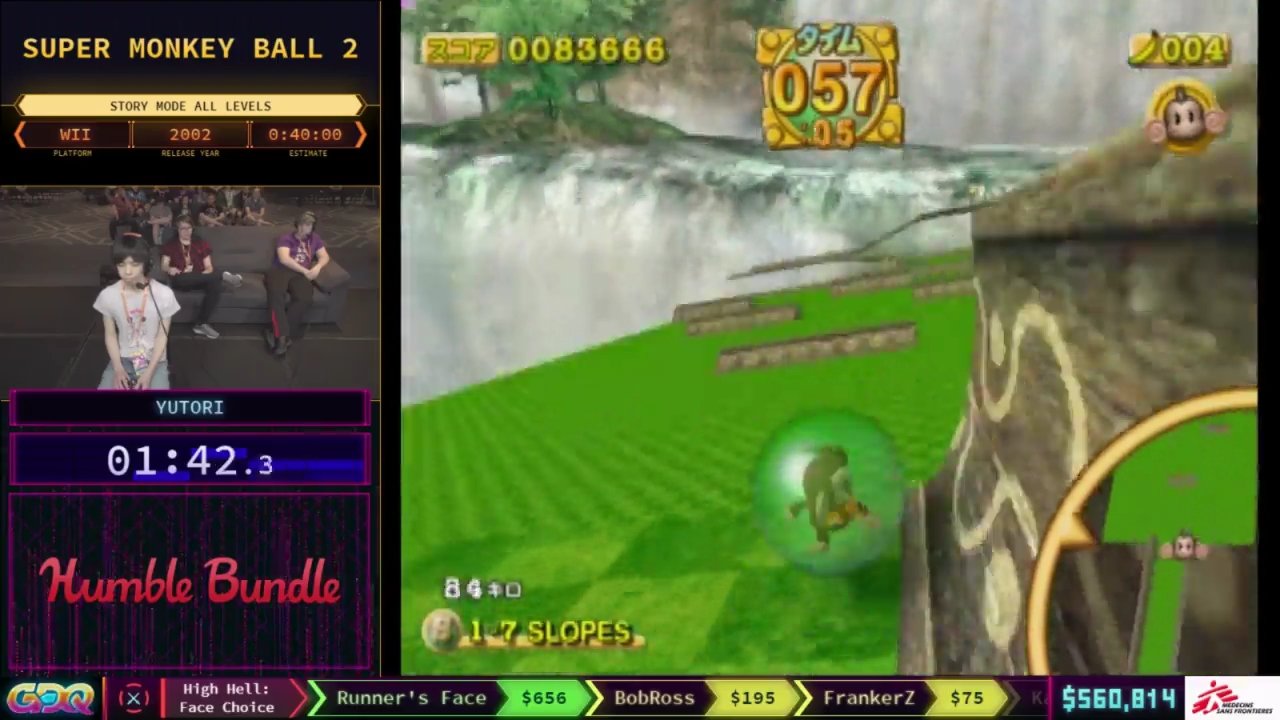 Super Monkey Ball has a pretty simple formula. You play as a monkey inside a ball, and roll yourself towards the goal marker while navigating the tricky stages. As the stage’s paths get more winding and the obstacles become more treacherous, the player is required to use caution and quick movement to survive. What makes Super Monkey Ball such a great speedrun is that it throws pretty much all caution to the wind, with the runner usually flying off ledges in super precise directions, slam dunking into the goal and quickly moving on to the next stage. It’s a flurry of advanced movement, precise pausing and controller placement, and knowing when to retry a stage. Generally speaking, all speed runs of Super Monkey Ball are fascinating to watch, but this run in particular had some exceptionally impressive tricks. Runner Yutori pulled most of them off on his first or second try, which is quite a feat considering just how hard these tricks are. Most players can barely get past the halfway point in Super Monkey Ball, but Yutori made an absolute mockery of the game’s challenges.

Spider-Man: Web of Fire by PeteDorr 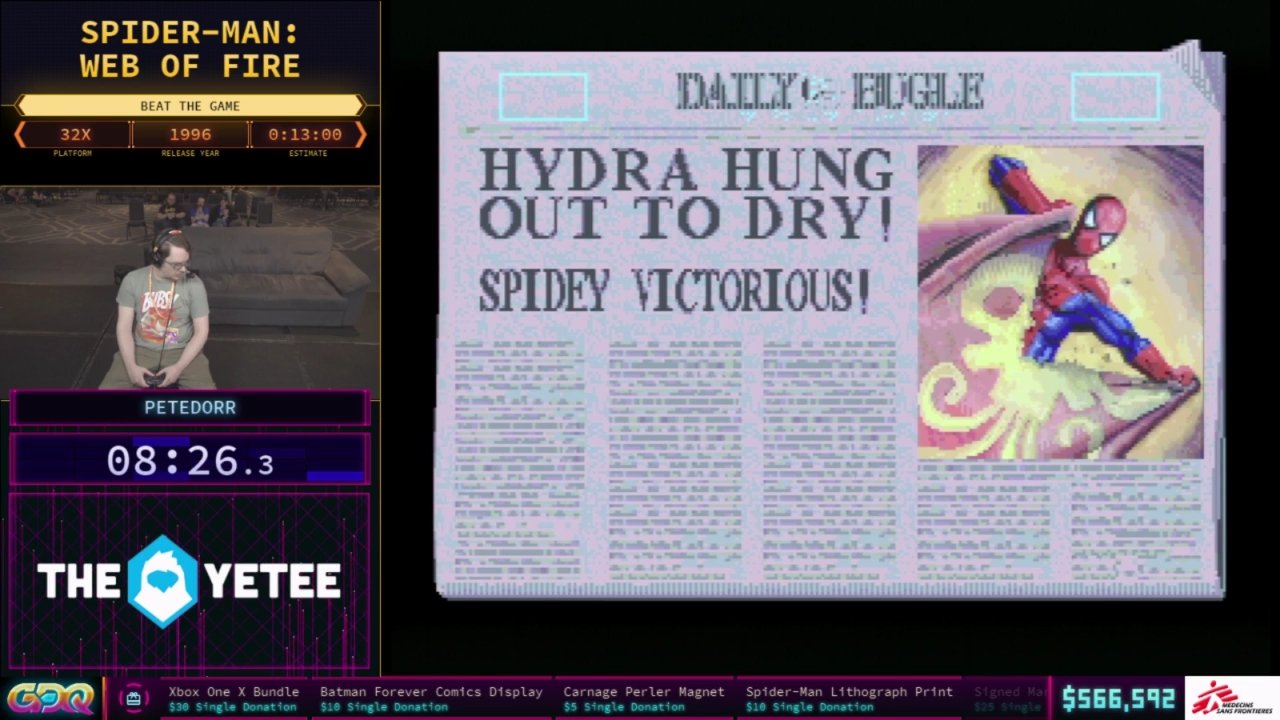 This Spider-Man title for the ill-fated Sega Genesis 32X has pretty much everything you’d want in a Spider-Man speedrun. It has clipping through walls, skipping entire levels, plenty of web-slinging, and even a fun superhero cameo. The actual game is a bit of a mess, with poor programming and shoddy controls. However, this is a speedrunner’s playground, as it lets them do some pretty fun things.  Runner PeteDorr showed off his mastery over the game, and ended up finishing up in 8 minutes and 26 seconds, setting a world record by beating the previous time of 8 minutes and 30 seconds. 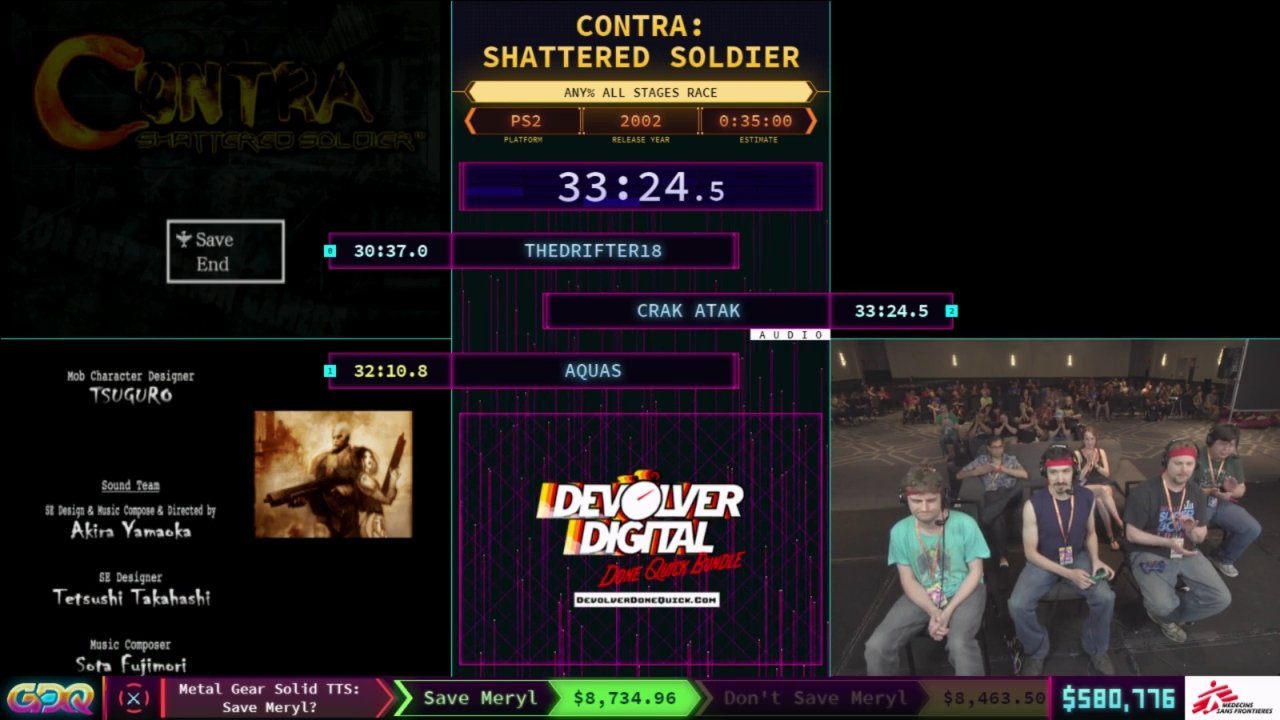 The Contra series is a staple in speedrunning, and this year we got to see one of the more modern Contra games with Contra: Shattered Soldier for the PS2. This three-person race consisted of longtime Contra speed runners, and was full of awesome sidescrolling shoot-’em-up action. The race was pretty close throughout, with only one of the runners falling a bit behind towards the end. There is some great commentary that explain a bit about the game’s mechanics and strategies, and although there’s a few tricks and glitches, for the most part this is a run that’s all about pure skill and accuracy. 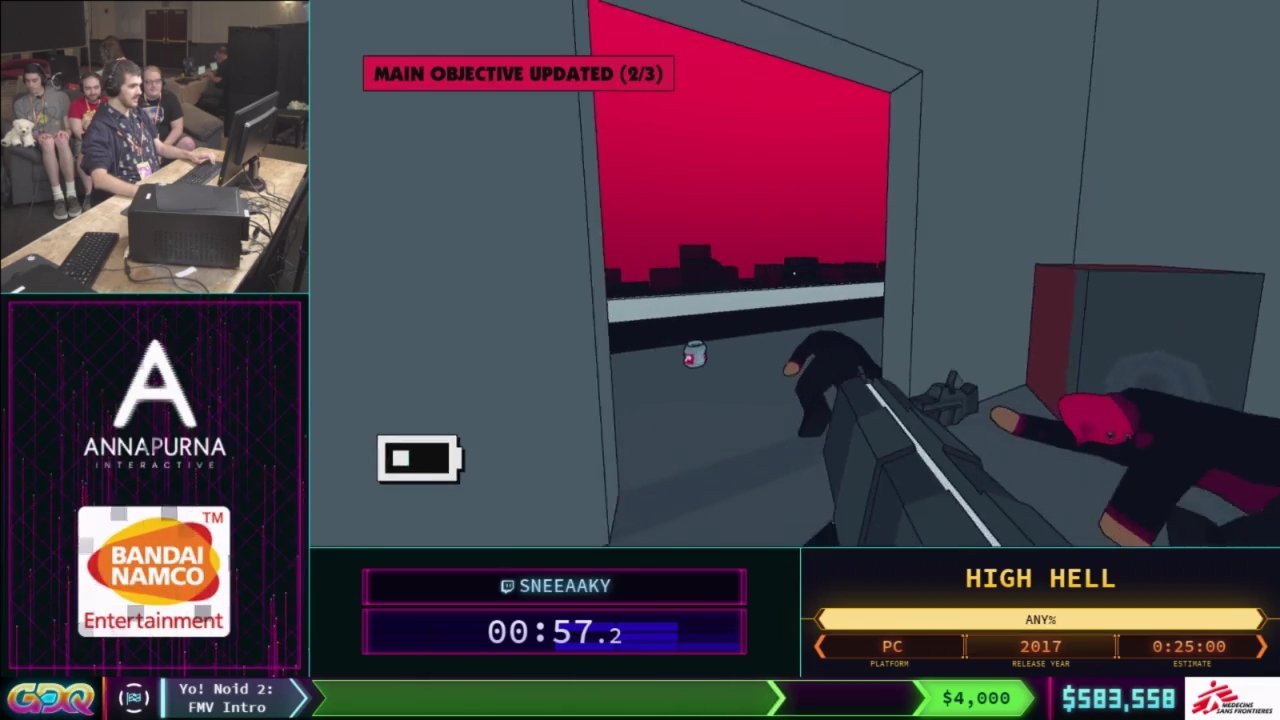 High Hell is a fast-paced first person shooter game developed by Devolver Digital, and as reductive as it sounds, the game is essentially a first person Hotline Miami. The game is broken up into 21 quick stages with pretty simple objectives. To complete a level, the player mostly clears enemies leading up to a boss before jumping off off the skyscraper where the level takes place. The fun use of color and cel-shaded graphics make this run a visually pleasing one to watch, but you’ll likely be just as surprised by the runner’s skill and accuracy. Speedrunner SNeaky blasted through the game in under 10 minutes, so you might even have to watch this one twice to catch it all. Not only is this a fun speedrun to watch, but it shows off an interesting and unique first person shooter that you should definitely play. 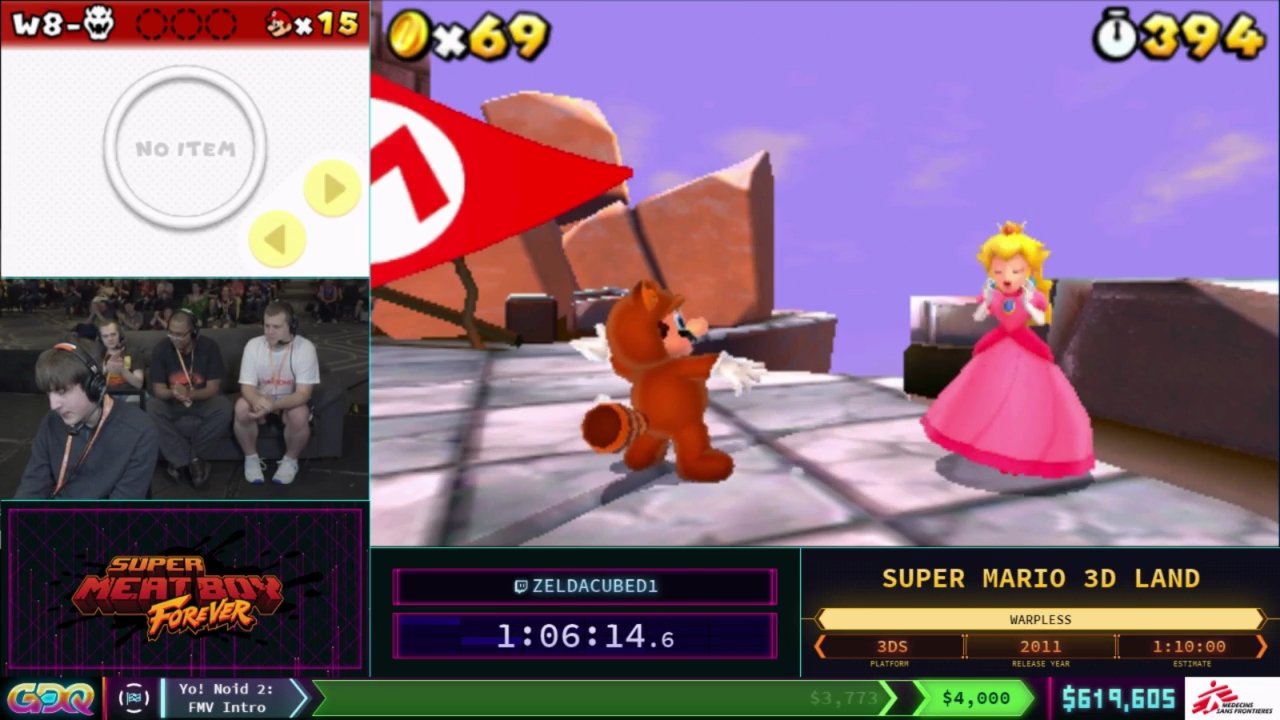 Mario 3D Land is one of my personal favorite 3D Mario titles, and watching this run was an absolute treat. Runner Zeldacubed1 ran the warpless category, so we got to see the majority of the game’s levels and environments. This category gave zeldacubes1 plenty of time to show off numerous movement tricks, including impressive strings of long jumps, ultra difficult while jumping, and even playing through some level sections completely blind. The structure of Mario 3D Land makes for a great speedrun, as levels are all pretty short and sweet. This makes for an interesting hour of 3D Mario variety that never lets up on the fun or cool speedrunning tech. If you have any love for the 3D Mario series, you should definitely give this one a look.

Cuphead (All Flags) by TheMexicanRunner

Few speedrunners are as prolific as TheMexicanRunner, the man who is most well-known for beating every single NES game. When I first saw that Cuphead would be ran by TMR at SGDQ, I thought that there would be no man better for the job. TMR confirmed my assumption by delivering a run that was both full of skill and entertaining commentary. At some points it felt a bit more like a let’s play than a speed run, with TMR reading some of the dialogue in funny voices. The energy level and excitement could be felt throughout the entire run, as it was one of the most anticipated of the entire week. As a speed run, Cuphead is absolutely awesome to watch, as each stage is essentially a highly unique boss with totally different patterns than the last. TMR destroyed each and every boss by using a combination of fun glitches and expert gameplay. The fun commentary and great presentation of the game easily make this one of the best runs of the week.

The fourth day saw more and more donations, as viewers and audience members sent in their money towards Doctors Without Borders. So far, SGDQ 2018 has raised well over $650,000 for the charity, which brings medical aid to those who need it most. There’s still three days left, and that donation total is sure to hit the $1 million mark.

That’s it for day four of SGDQ 2018! Be sure to check back for the rest of our recaps as the weekend continues, or follow our Twitter acccount (@official90skid) for live updates on our favorite runs!