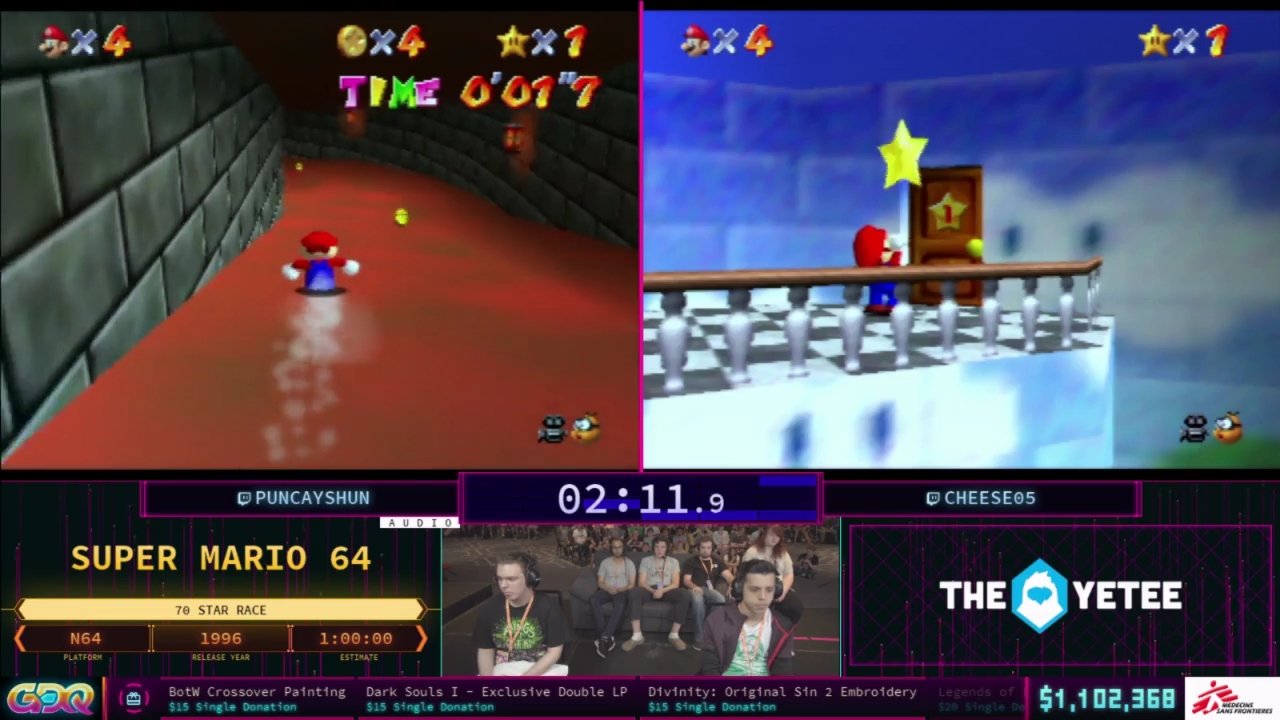 The sixth day of SGDQ 2018 held tons of awesome speedruns, spanning from Mario Kart 8 to The Legend of Zelda: Wind Waker HD.  The early hours of the morning had a good variety of games, which eventually lead into the “beat ’em up” block.  This gave way to a few Mega Man titles, a Kingdom Hearts run, and some big name titles.  With the sixth day of this seven-day long speedrunning marathon in the books, it’s a good time to take a look at the best speedruns that were on display.  If you’re looking for some quality speedruns to check out, this list will be a good place to start.  Keep in mind that I was not able to watch every run, so there’s a good chance that day six had many more excellent speedruns to consume.  You can check out the full schedule HERE, in case you want to see every game that was played.  Without further ado, let’s look over the best speedruns from day six of Summer Games Done Quick 2018. 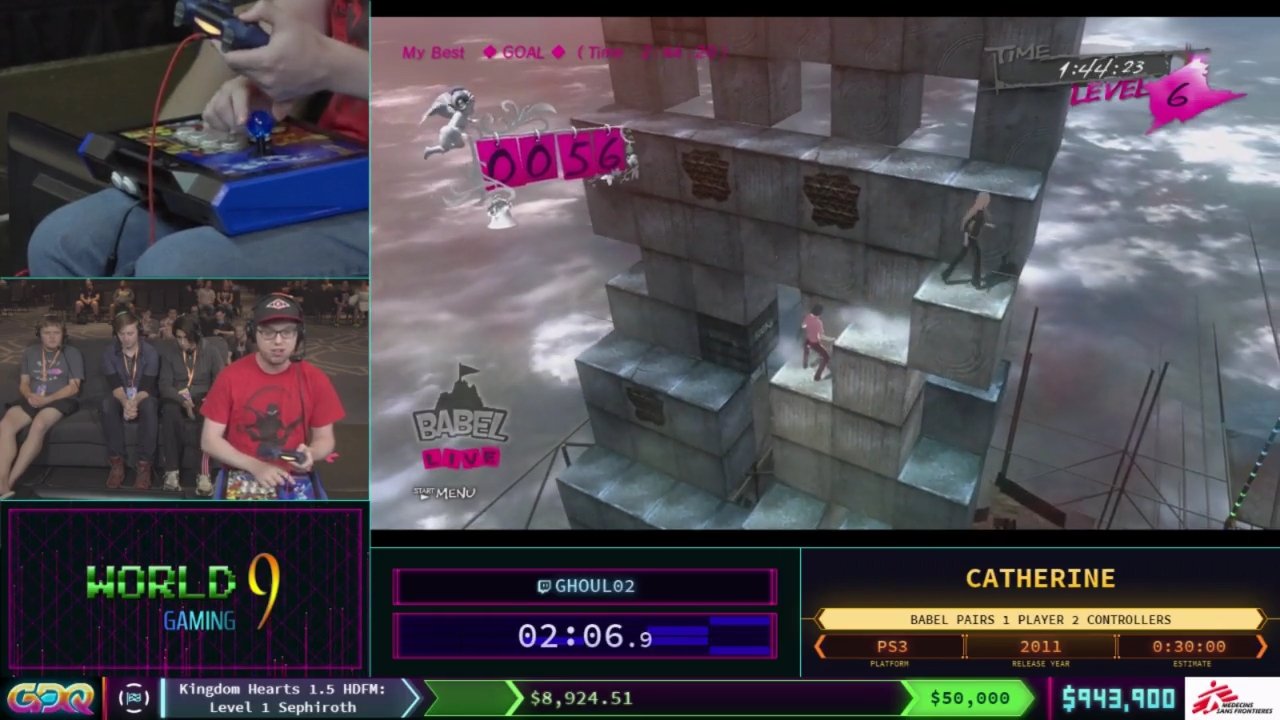 As much as I love the purity of a traditional speedrun, I’ve found myself gravitating towards more specialty runs at this GDQ marathon. We’ve seen runners play multiple games at once, play games only using one hand, and even complete speedruns blindfolded. Speedrunner Ghoul02 turned things up a notch by playing Catherine, a complex puzzle game that involves climbing a tower while shifting blocks.  He did this all while controlling two characters at once. Ghouls02 played the two-player Babel mode, controlling one player with a standard DualShock controller and another with a fight stick. He did this all while simultaneously explaining everything about the game, delivering quality commentary that gave a surprising amount of depth to the run. This makes the random element of Catherine that much more difficult, as it forced Ghoul02 to constantly develop strategies on the fly. The fact that he was able to intelligently play the game on two controllers at once while also doing his own commentary is astounding, and one of the most mind-boggling displays of gaming skill I’ve seen in a while.

Streets of Rage 2 (Mania) by Anthopants 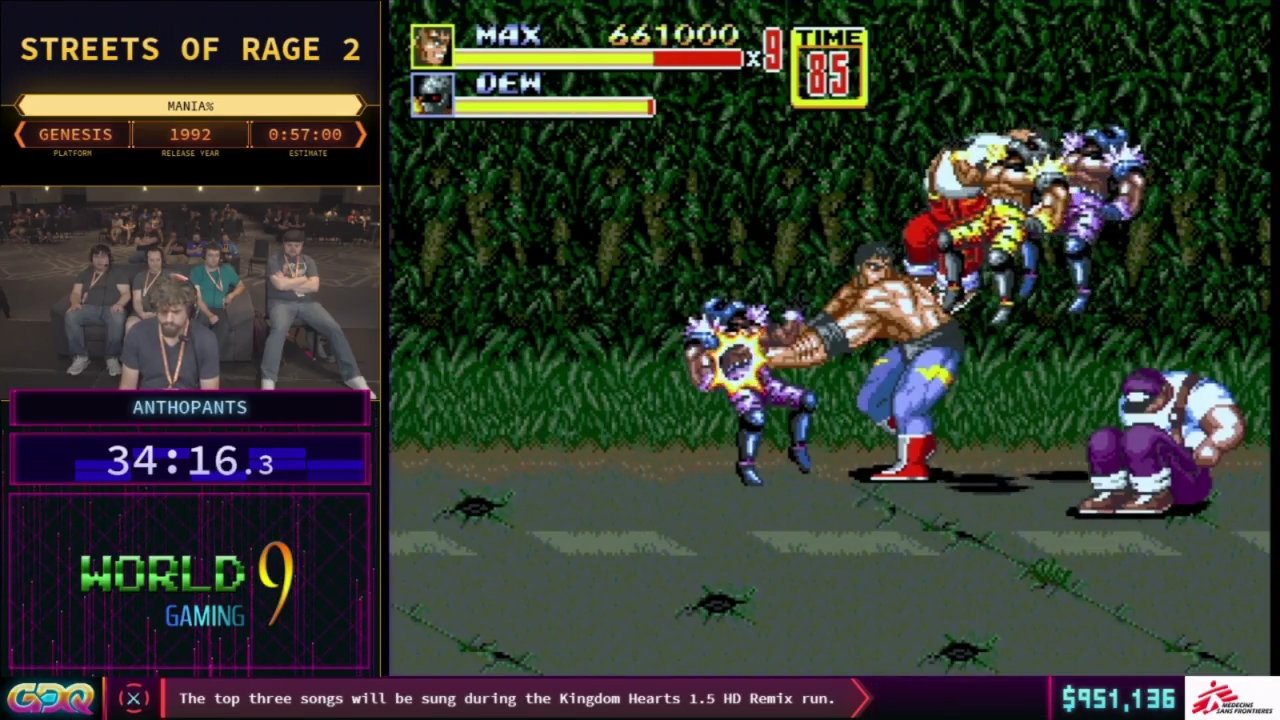 Few beat ’em up games hold the level of difficulty that Streets of Rage 2 does. If you’ve ever played the Sega developed beat’em up trilogy, you know just how frustrating and cheap the game can be. Anthopants displayed his clear mastery of the game by beating the ultra-difficult Mania mode in less than an hour and only using one credit. As numerous enemies flooded the screen in an attempt to swiftly end Anthopant’s life, he retaliated by throwing them off of ledges, using long strings of combos, and using special moves when the route allowed for it. As a long-time fan of the Streets of Rage franchise, I often struggle with the game’s difficulty even after playing it dozens of times. Watching Anthopants absolutely destroy the game on its hardest difficulty was an eye-opening experience, showing that despite how hard beat ’em ups can be, with the right skill level, they can be defeated.

Over the course of the past few years, GDQ events have hosted a wide variety of Super Mario 64 speed runs. The game has numerous categories, due to the large number of routes that you can take through the game. One of my favorite categories is 70 star, which has the runners collecting over half of the games’ stars before completing it. This route gives you a good look at numerous worlds and unique star objectives, and it requires the runners to pull off several hard tricks and consistently perform difficult movement. Both of the runners were obviously highly skilled at Super Mario 64 runs, although cheese05 clearly demonstrated his superior abilities. From the Bob-omb Battlefield to the final boss encounter with Bowser, both runners showed off incredible discipline and highly practiced maneuvers. Watching these two runners skate around the world of Mario 64 was a highlight of the entire event, and was one of the better showings of Super Mario 64 in GDQ history. Although the race wasn’t as close as I would’ve liked it to be, both runners performed with exceptional ability, making for a must-watch run.

The Legend of Zelda: Wind Waker HD (any%) by Linkus7 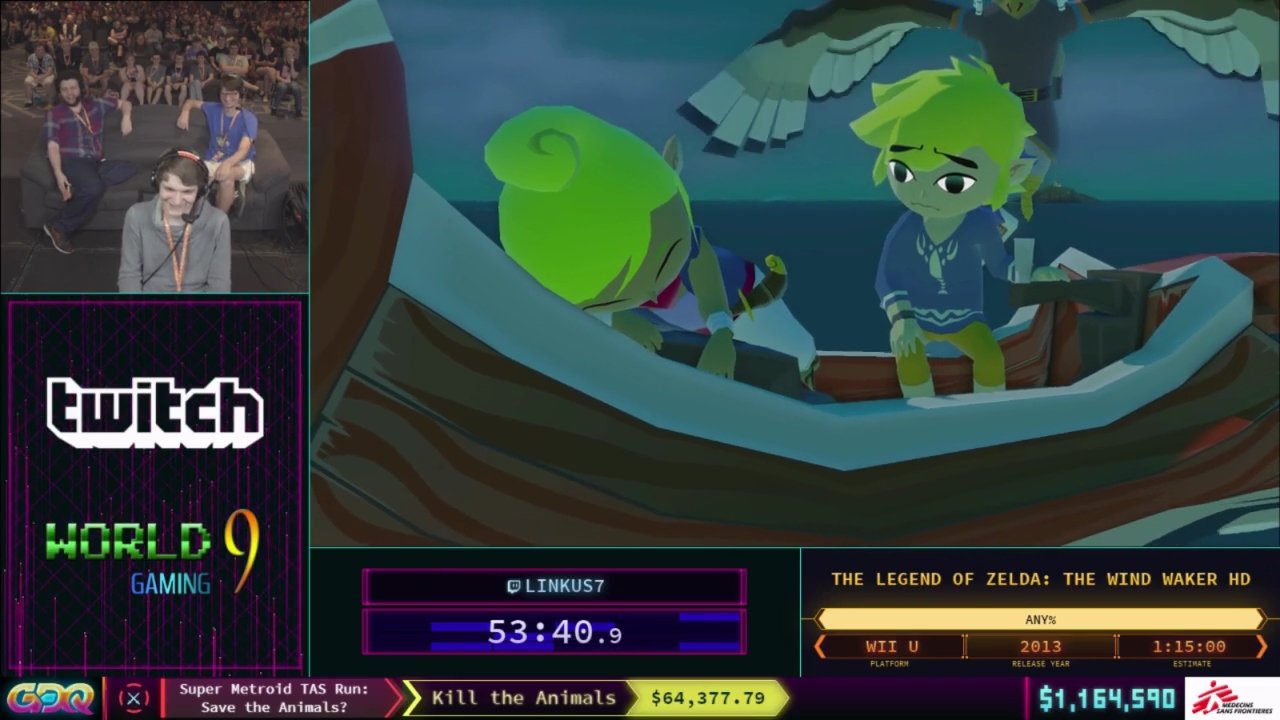 Linkus7 went over his estimated time limit, failed a trick almost a half dozen times, and spent the first seven minutes of the speedrun pausing and unpausing the game. The Wind Waker HD speedrun was by no means a perfect exhibition, but it did give us the most updated look at a Zelda title that has resisted speedrunners’ attempt at breaking it. When Wind Waker was last ran at a GDQ event, the final time was around four hours long. This run was just under an hour and a half, so going into it, I knew there were some pretty hefty skips to be had. The aforementioned seven Minutes of pause buffering was a rocky way to start the run, but it did highlight an insane speed glitch that allowed Linkus7 to travel across the game’s massive ocean space without the use of a boat. From there on, Linkus7 highlighted numerous glitches and precise movement, quickly working through the first dungeon of the game.  When he reached the invisible barrier, an obstacle that has proved itself impassable for several years, Linkus7 showed us the insanely difficult glitch to skip past it.  This is a trick that speedrunners have been trying to sleuth out for years, and seeing it for the first time, I was astonished.  The run fell off the rails towards the end, but between the incredible speed glitch and invisible barrier skip, this was one of the best Wind Waker HD speedruns I’ve seen.  It’s also the fastest by a long shot.

TAS Block by various runners and the TASbot team 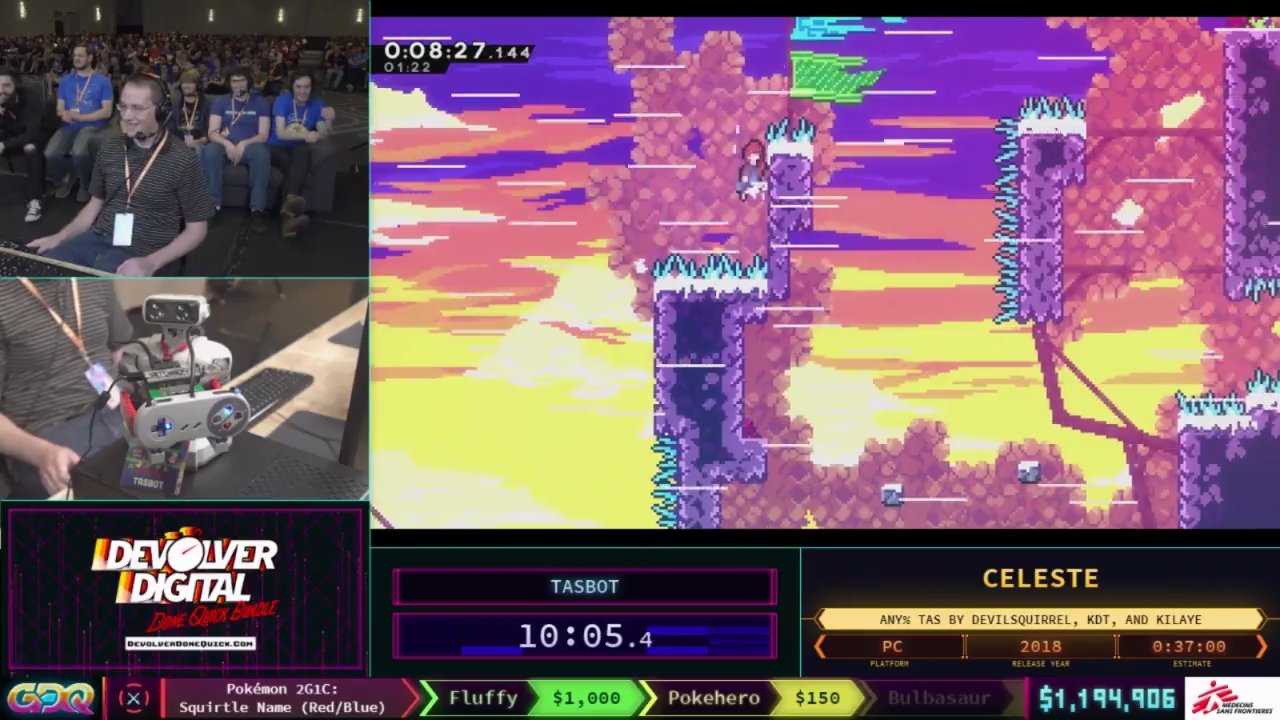 Unlike all the other runs at GDQ, the TAS block is full of games being speedran by a computer. While this might sound like it sucks the fun out of everything, the TAS block is instead one of the most eye opening and interesting blocks of any GDQ. TAS stands for tool-assisted-speedrun, in which a group of people program a computer to execute button inputs that would be impossible for a human to pull off. This leads to a display of perfect gameplay and incredibly hard glitches that produce genuinely surprising moments. This block saw tool assisted speedruns of Super Metroid, F-Zero GX, and Celeste. Each one highlighted a different aspect of tool assisted speedruns, giving us a plethora of exciting content. The Celeste run was incredibly fast, even when compared to the near-perfect execution of the human runners who ran the game a day prior. 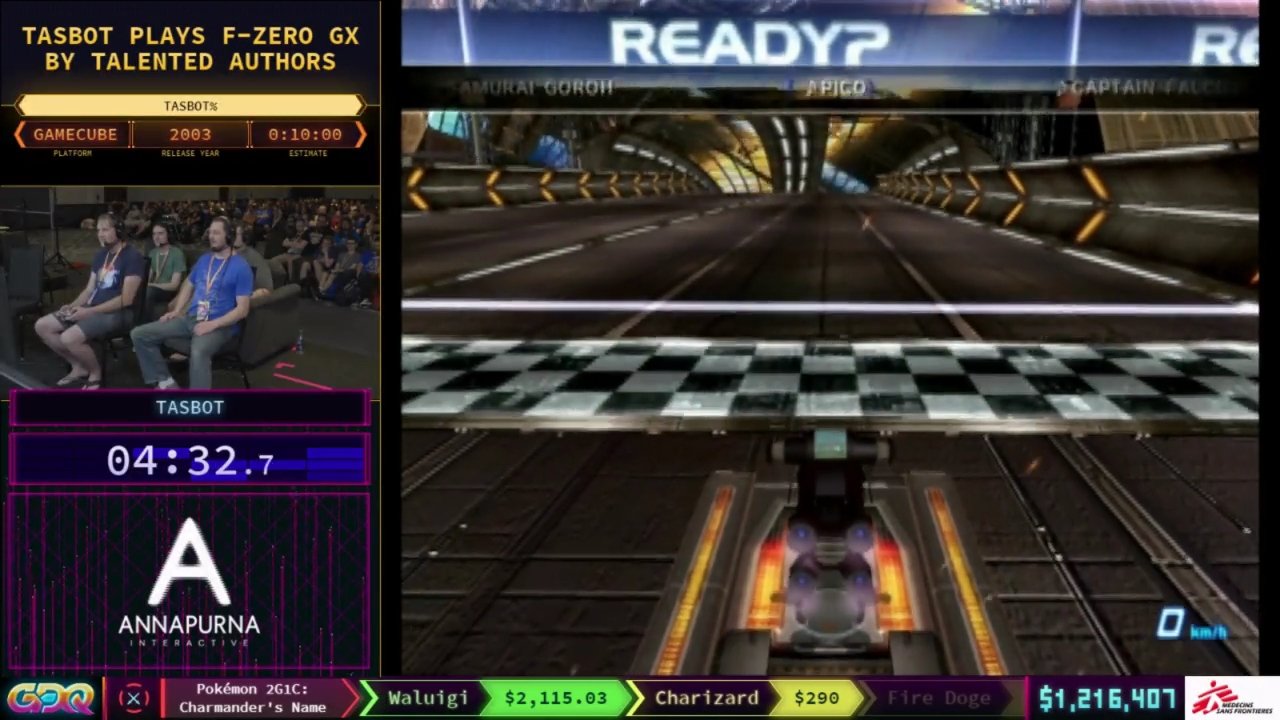 The F-Zero run contained blistering fast races that destroyed human world records by a long shot. The Super Metroid run showed off the creative power of tool assisted speedruns, resulting in a demonstration that completely subverts your expectations. All things considered, the TAS block displays a level of gaming skill that is truly inhuman, and an impressive feat of technological engineering. If you enjoy speedruns because they give you a better look at the raw structure of each game, then the TAS block should be the next thing you watch.

If you’re looking to improve the computing power of your own organic computer (aka, your brain), then why not check out this list of the best brain training apps?  You might not be able to play video games as well as a TAS can, but you might get a bit more mental dexterity out of it! 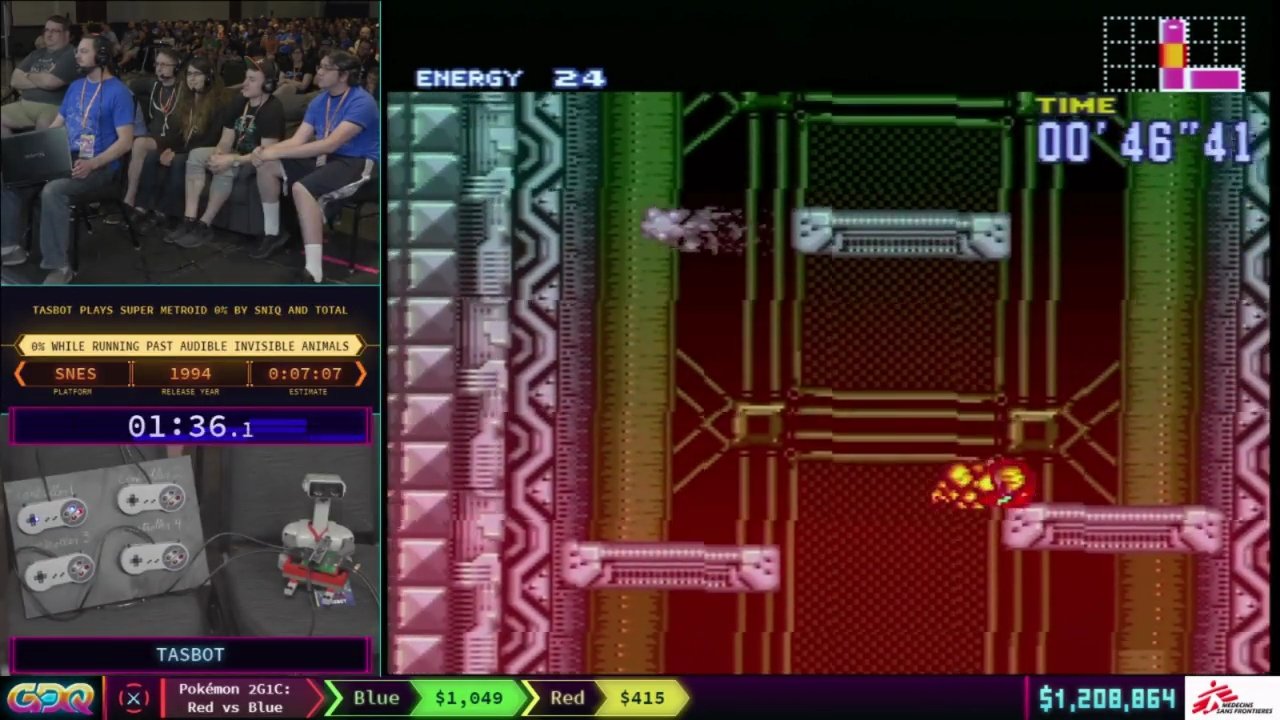 On the sixth day of this seven-day long marathon, the speedrunners broke through the $1 million mark.  As of writing, the total sits around $1.2 million, and continues to rise.  The last SGDQ event raised $1.7 million for Doctors Without Borders, and there is a good possibility that last year’s record will be broken.  Some of the biggest runs of the week are still yet to come, namely Undertale, The Legend of Zelda: Ocarina of Time, and Super Mario Odyssey.  Regardless of the final total, every person at SGDQ 2018 should be incredibly proud of their hard work and dedication.  I’m excited to see just how much cash SGDQ 2018 will end up raising, as each year’s total surprises me time and time again.  It’s truly heartwarming to see how much good the gaming community can do when we put our minds to it.

That’s all for day six of SGDQ 2018!  There’s still one more day left to go, so don’t forget to check back tomorrow for our recap of the final day.  You can also follow our Twitter account (@official90skid) for live updates on our favorite runs.  I’m amped up for plenty of runs tomorrow, and I hope you’ll watch along!