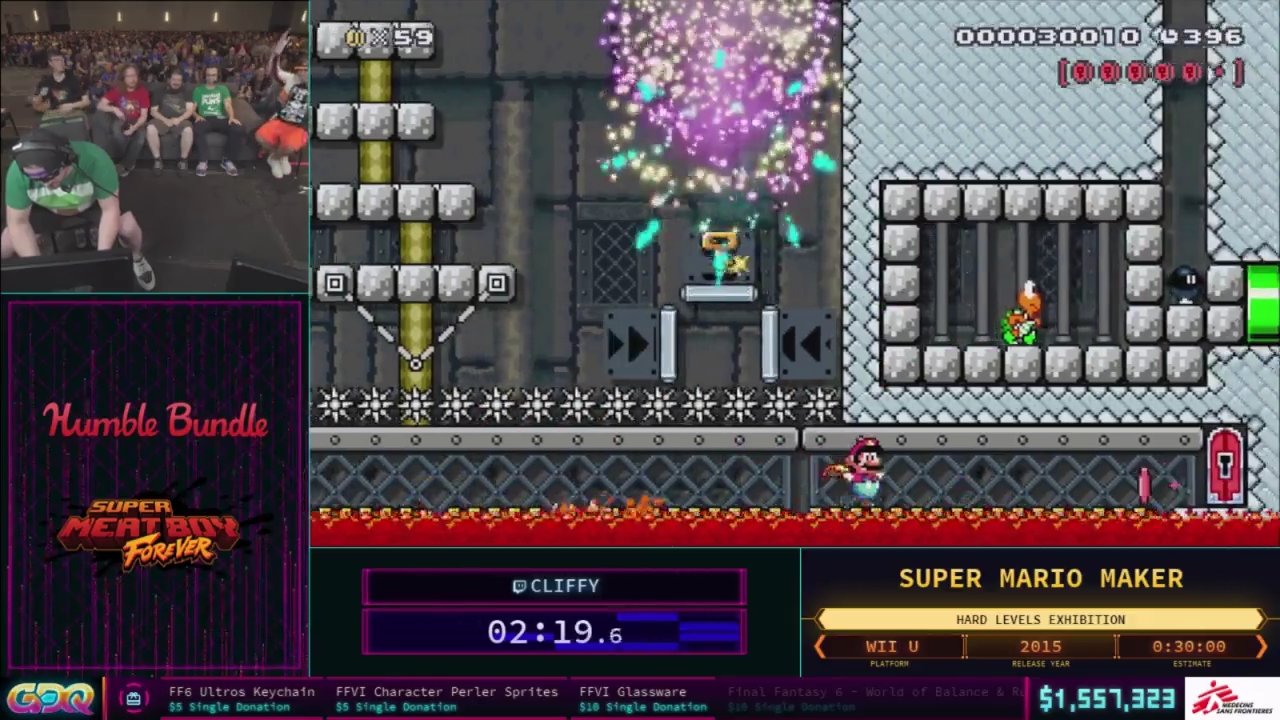 The final day of SGDQ 2018 has come and gone, and we couldn’t be more proud of the gaming community on the whole.  Over the course of the seven-day long speedrunning marathon, gamers from all around the world donated towards the charity Doctors Without Borders.  The marathon ran on Twitch, garnering well over 150,000 viewers at a time.  The charity ran incredibly well, with only a few minor hiccups.  Generally speaking, the entire event was a wonderful time full of comaraderie, fun games, and highly entertaining moments.  We spent all week picking out our choices for the best runs of SGDQ 2018, and we’re not done yet.  With day seven in the books, let’s take a look at our picks for the best runs from the final day.

If you’re curious to see all the games that were speedran at the event, you can check out the full schedule here.  Additionally, you can find playback links to every GDQ event at this convenient site.  If this is the first recap article you’ve found, don’t forget to take a look at our picks for ever other day of the week.  There were great runs of every day, so there’s plenty of fun stuff to check out.

Super Star Wars: The Empire Strikes Back by Indy 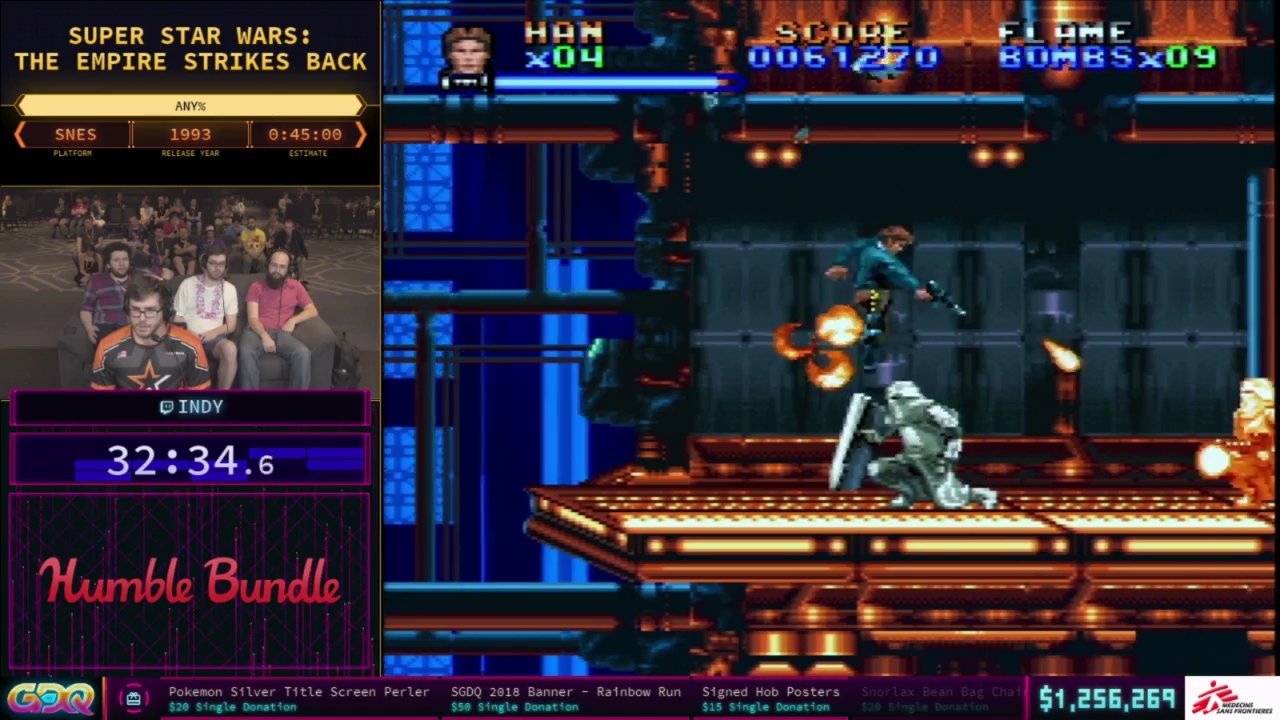 For those who think that modern Star Wars games are unfair, wait until you see what they looked like on the Super Nintendo. Speedrunner Indy took us through Super Star Wars: The Empire Strikes Back, a brutally difficult platforming game based on the film of the same title. If you grew up with a Super Nintendo, you probably have a good idea of just how frustrating the Super Star Wars games were, and probably also have a high amount of nostalgia for the games. Indy showed us the quick way to success by utilizing numerous Jedi powers, unique character movement, and all around gaming skill. Whether or not you have nostalgia for the games or movies, it’s still awesome to see such a notoriously hard game get destroyed. 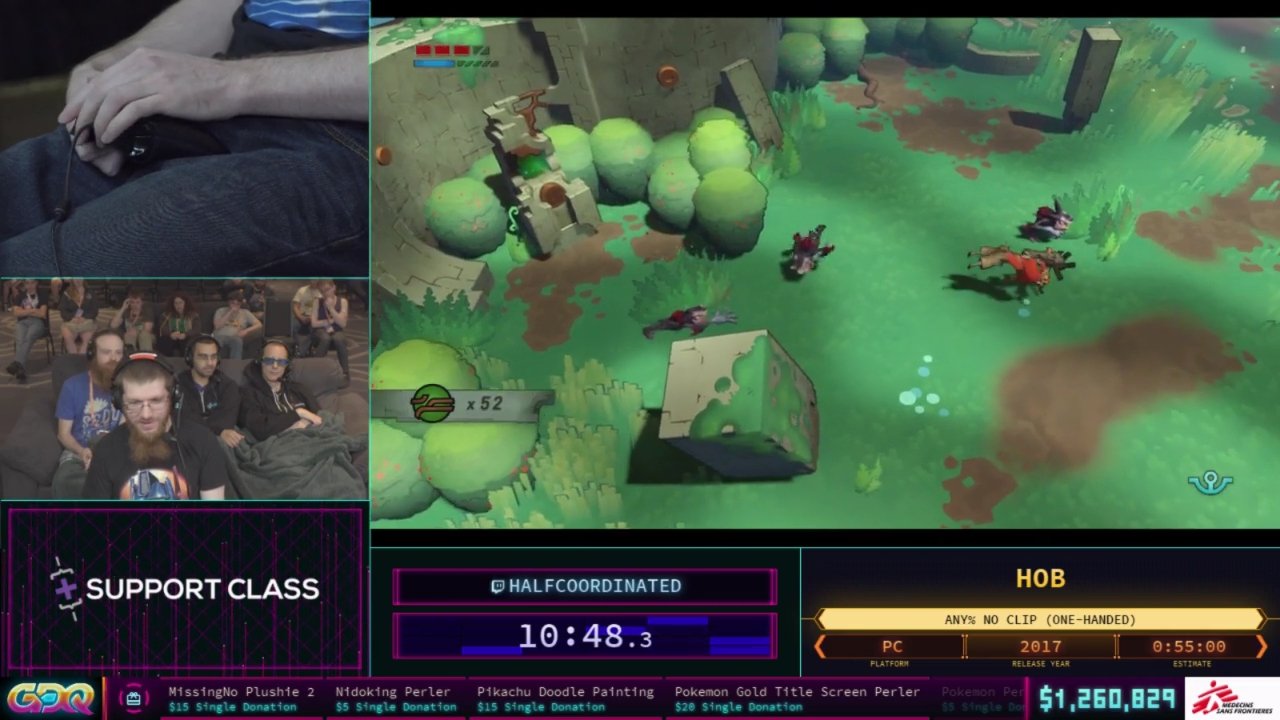 I was unfamiliar with this colorful action adventure until halfcoordinated performed his run in the morning. As always, halfcoordinated excellent commentary and positive outlook was pleasant and enjoyable; a great way to start the day. Like all of his runs, halfcoordinated blazed through the game using just one hand. His inspirational story lead to touching donation comments, giving us a wholesome and quality run to kick off the final day’s festivities.

I Am Bread (Bagel Race) by Nerd_Squared 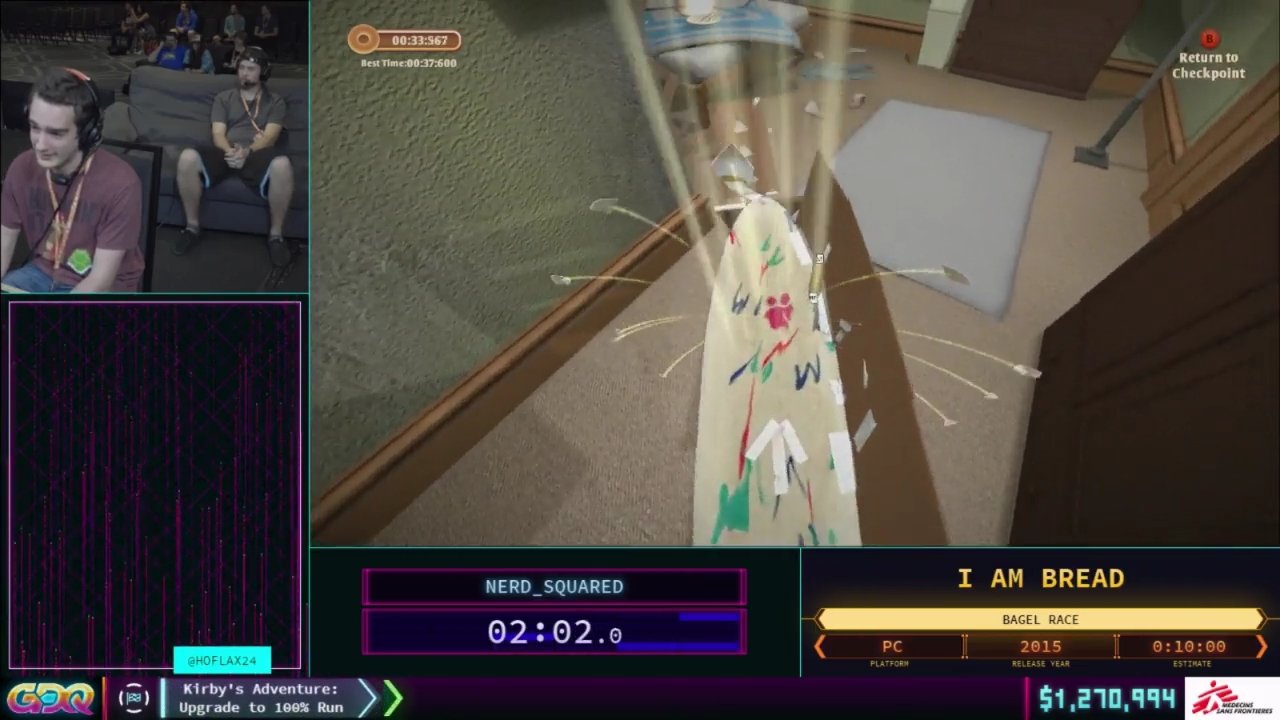 I am Bread is an incredibly ridiculous game where you control a piece of bread on its journey to become toast. It also contains many janky high speed races in which you pilot a bagel. Nerd_squared chose to show off his skills in the latter experience, resulting in a hilarious but oddly impressive display of breakfast food ability. This run compliments the games in the silly games block very well, so if you watched any of that stuff and enjoyed it, this is the next best thing. There’s also some extra content after the run that shows off the Rampage mode, but I won’t spoil that brief and humorous aside.

Undertale (All Yellow Credits) by Snowiey101 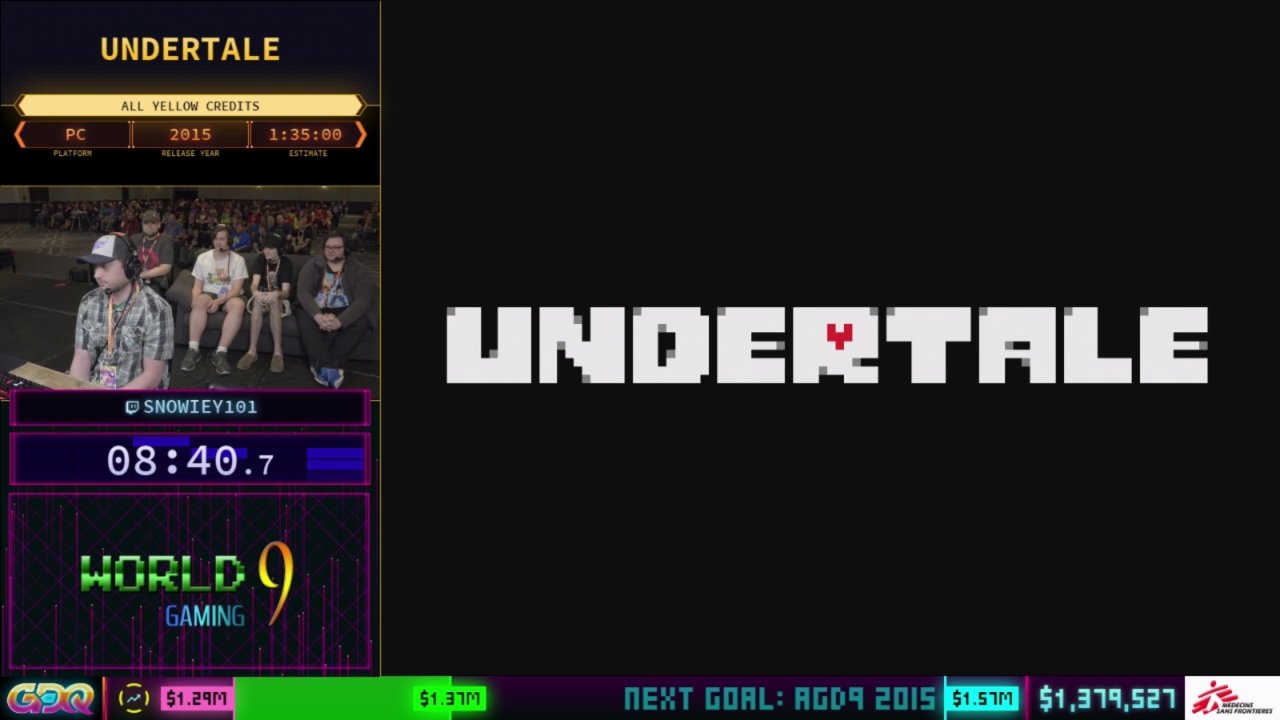 Undertale is an insanely popular indie RPG that subverts your expectations and fills you with laughs and emotion along the way. Although this speedrun skips all of the dialogue and text, it still manages to produce the same feelings. Snowiey101 showed off his intimate knowledge of the game’s mechanics by blazing through the game in just over an hour and a half. This version of the speedrun was in the “all yellow credits” category, which shows off the “true pacifist” route as well as some extra goodies in the ending. Throughout the speedrun, both the runner and the couch commentators delivered entertaining tidbits and fun conversational quips. This, combined with a healthy amount of energy and emotion from the audience, led to an excellent run towards the end of the event. Be forewarned though, this speedrun will contain spoilers for Undertale. If you’ve yet to play this indie masterpiece, I suggest you do so first. 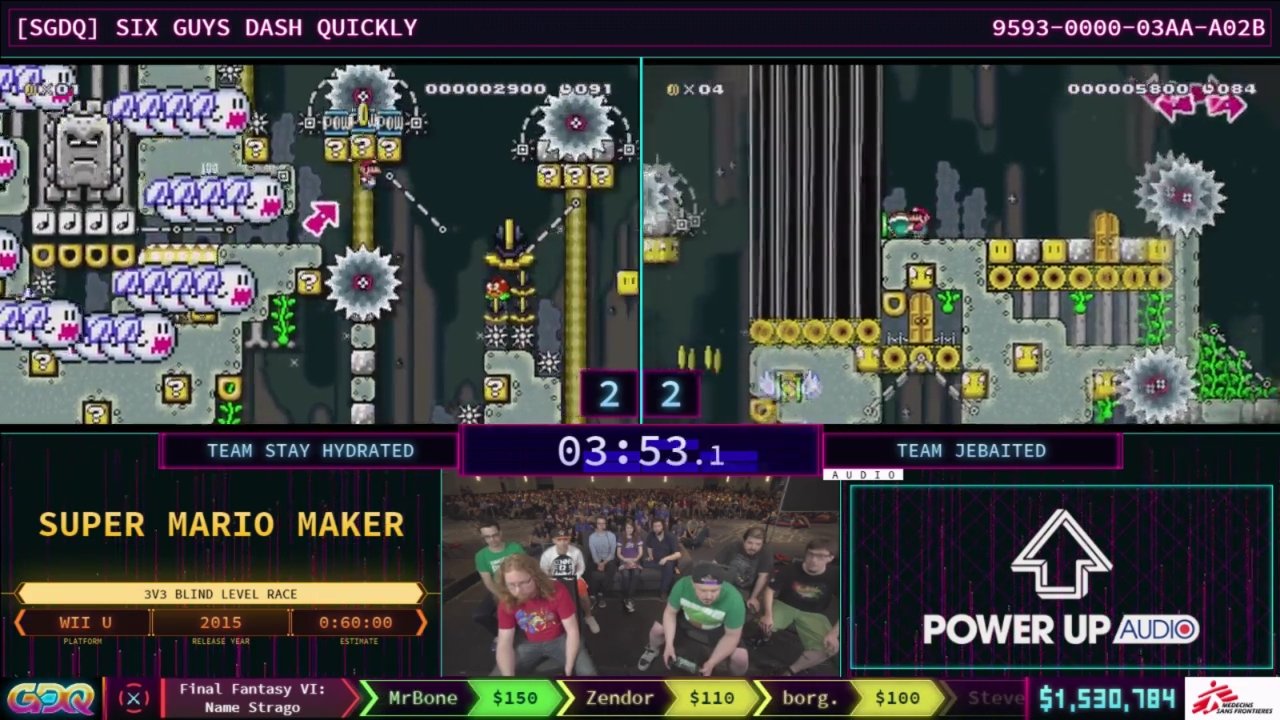 Super Mario Maker allows fans of the red plumber to make their very own levels, shaped after a variety of specific Mario styles.  It’s a popular game for speedrunners of the Mario franchise, as it tests their skill at insanely high levels.  This race was spectacular in many ways, but mostly for the surprising wins, crushing losses, and heart-stopping tension.  Two teams of three runners each, Team Stay Hydrated and Team Jebaited, faced off in a six-level endurance race.  The levels being played were brand new to the runners, hand crafted for SGDQ 2018’s race.  The teams were given six minutes to try and complete each brutally tough level, with each victory gaining them a small time advantage in the final level.  The race went back and forth, and it was impossible to tell who was going to come out on top.  Altogether, this run contains such a crazy amount of variety and skill that you just have to see it to believe it.

After the race concluded, each of the six speedrunners showcased their own punishing levels.  Each runner got to show a bunch of tricks and glitches that they find interesting, as well as highlight their personal strengths as Mario players.  Between this and the race, the Super Mario Maker block was tons of incredible Mario knowledge and skill that is a must-watch for any fan of speedrunning.

The Legend of Zelda: Ocarina of Time (BINGO) by Runnerguy2489 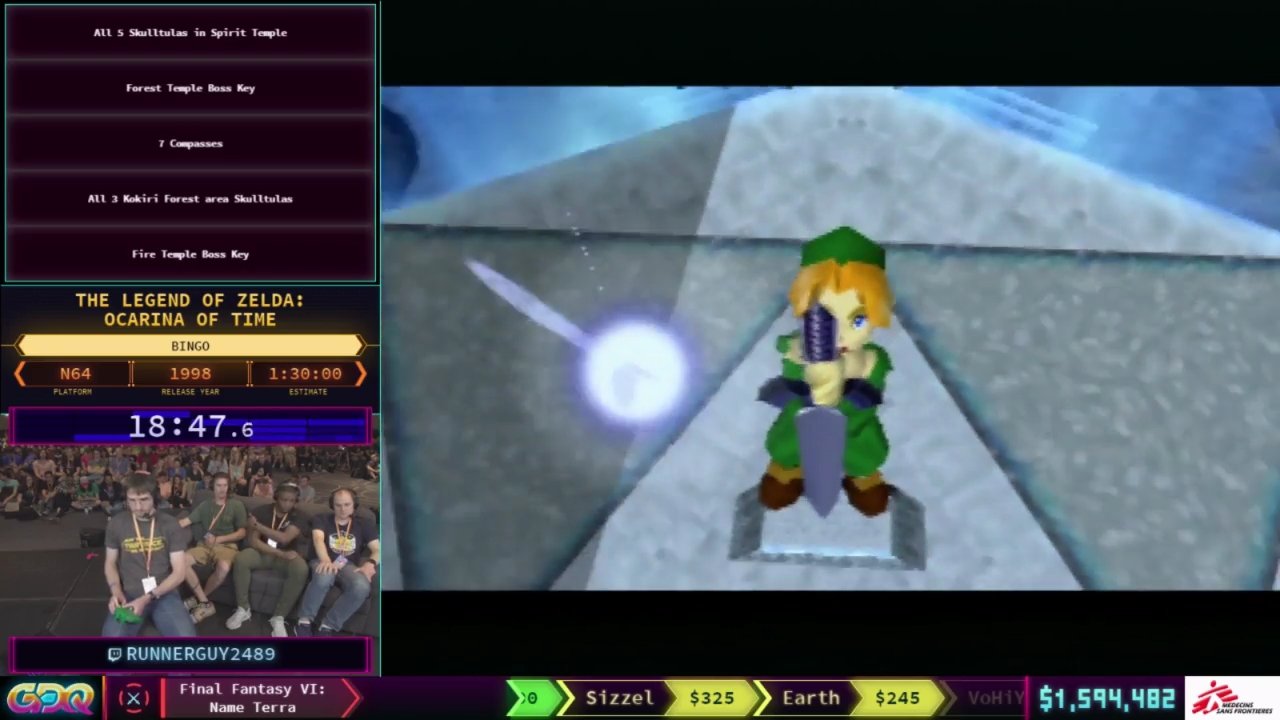 The Legend of Zelda: Ocarina of Time is a game so broken, that speedrunners have even made a game out of breaking it.  Unlike a traditional speedrun, a BINGO run of Ocarina of Time tasks players with thinking on the fly and coming up with impromptu routes towards specific objectives.  It plays just like a normal game of BINGO, but with various objectives spread out across the game.  It’s up to the runner to use their knowledge and formulate a quick route to completion. Runnerguy2489 did a great job explaining the rich history of Ocarina of Time BINGO, while simultaneously pulling off ridiculously hard tricks.  If you’re new to Ocarina of Time speedruns, this run will be a bit hard to follow, but it will absolutely blow your mind.  For someone like me, who has seen too many different Ocarina of Time speedruns to count, this was a refreshing display of a fun way to play the game.

Super Mario Odyssey (any%) by NicroVeda 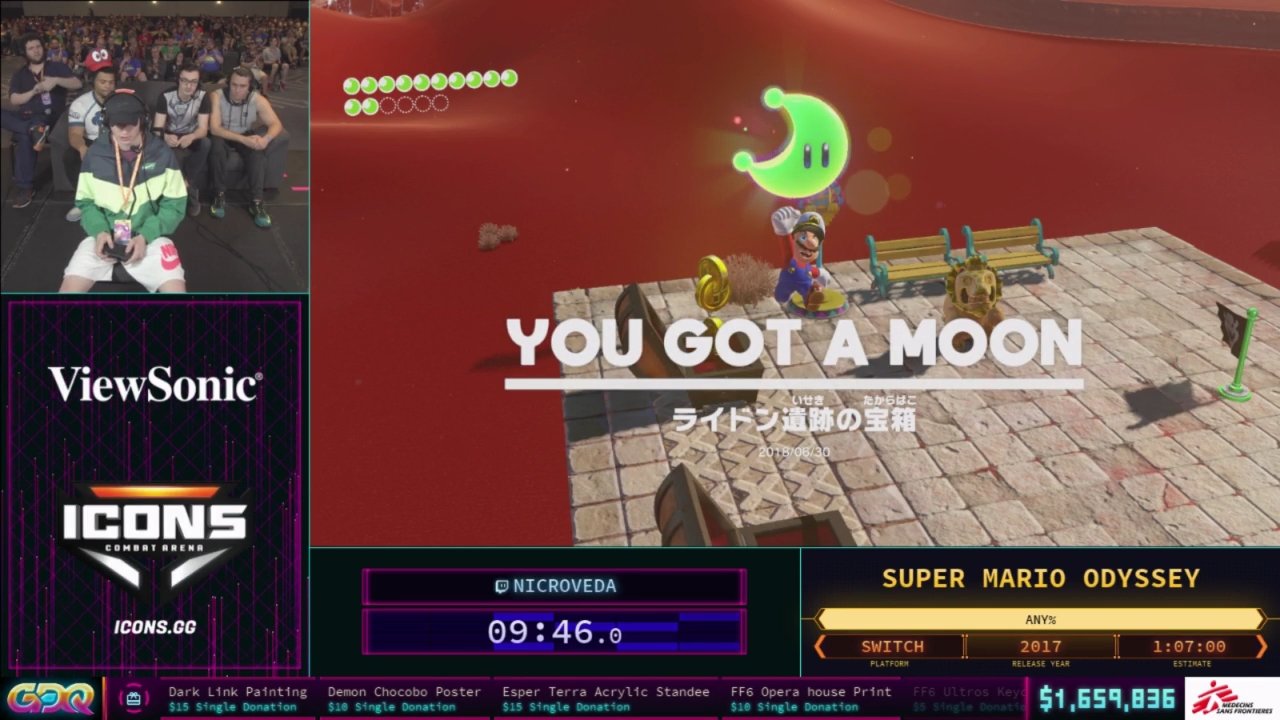 This was the debut of Super Mario Odyssey at a GDQ event, and it definitely didn’t disappoint.  Speedrunners have been working hard on Super Mario Odyssey, discovering new tricks and forming their own routes.  It’s a fresh game in a beloved franchise, and it’s one of the most active speedrunning games around.  Runner NicroVeda showed off a solid run of the “any%” category, which simply requires the runner to reach the end of the game as quickly as possible.  NicroVeda did this by executing numerous glitches, cutscene skips, and expert movement skill.  If you thought all the triple jumping and long jumping was nuts in Super Mario 64, then you should definitely check out this run of Super Mario Odyssey.  More importantly, the run is a great example of a popular speed game that is new and growing, and an excellent place for speedrunning newcomers to hop in.  I’m sure we’ll be seeing plenty of Super Mario Odyssey speedruns for the next few years, and NicroVeda’s run was an excellent premiere.

I don’t like watching super long speedruns.  I don’t have the attention span for it, and I don’t find them incredibly interesting.  This goes doubly for retro Final Fantasy runs, a franchise I don’t have much nostalgia for.  I can understand why people enjoy them so much, but 7 hours straight of Final Fantasy VI is too much for me, even considering it’s one of my favorites in the franchise.  That being said, I was incredibly happy to tune in towards the end of puwexil’s fantastic run, just as the donation counter hit the $2 million mark.  Even for a grumpy, RPG speedrun hater like myself, I was caught up in the absolute magical energy emitting from the crowd, the couch, and the runner.  The final boss fight was a wonderful thing to behold, as seemingly everyone in attendance rooted on puwexil, chanting his name.  The Final Fantasy VI run was by far one of the best GDQ finales ever, with a level of good nature and wholesome attitude that I haven’t seen in a while.

The Final Fantasy VI run lead directly into the SGDQ 2018 finale, with everyone gathering around for the final donation tally.  After the seven-day long marathon reached its conclusion, SGDQ 2018 raised $2,122,169 for Doctors Without Borders.  This was a brand new record for an SGDQ event, smashing through last year’s total of $1.7 million.

It’s always great to see the powerful things the video game community can do for the world, and SGDQ 2018 was a highlight.  All told, the Games Done Quick events have raised over $15,000,000 for charity since their inception.  That’s no small feat, and something that everyone involved should take great pride in.

That’s all for SGDQ 2018 day seven.  Thanks for following along with us during the week!  I’ll be back to cover AGDQ 2018 in January (info below), and hopefully we’ll be able to pull off $3 million this time!  I had a blast watching the event as always, and I am so proud of what everyone accomplished this week.  We’ll see you in January! 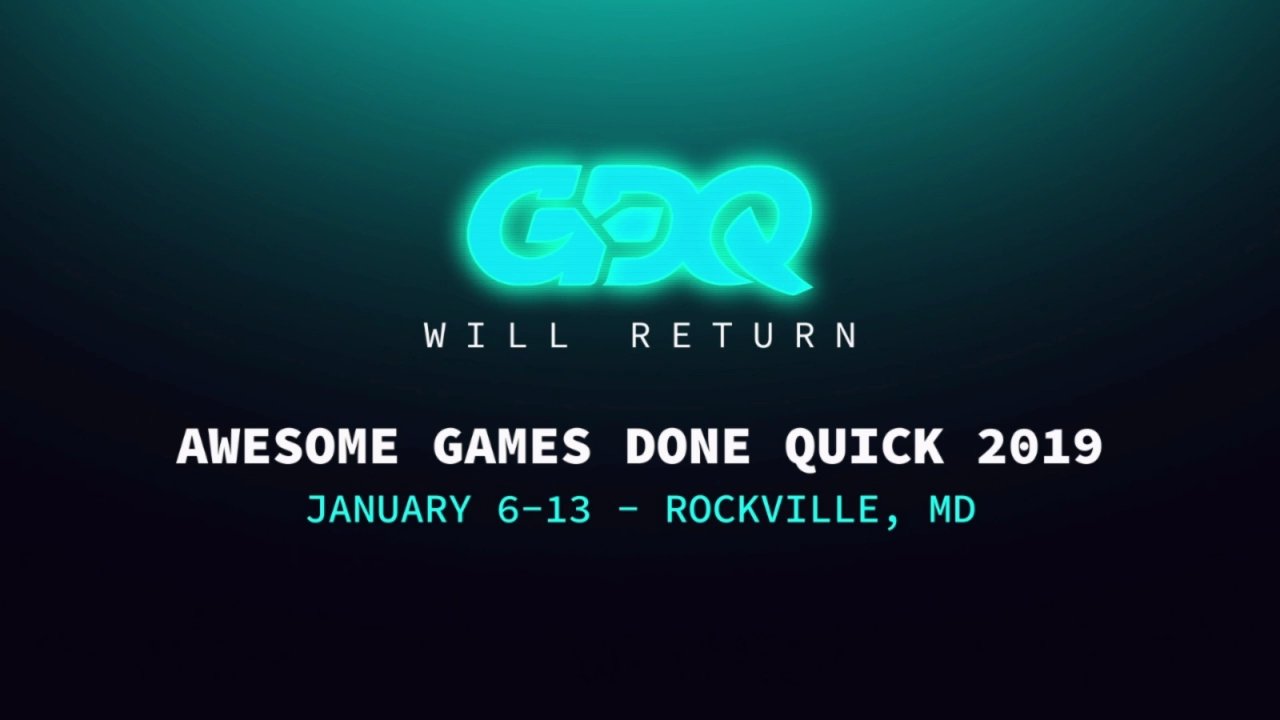