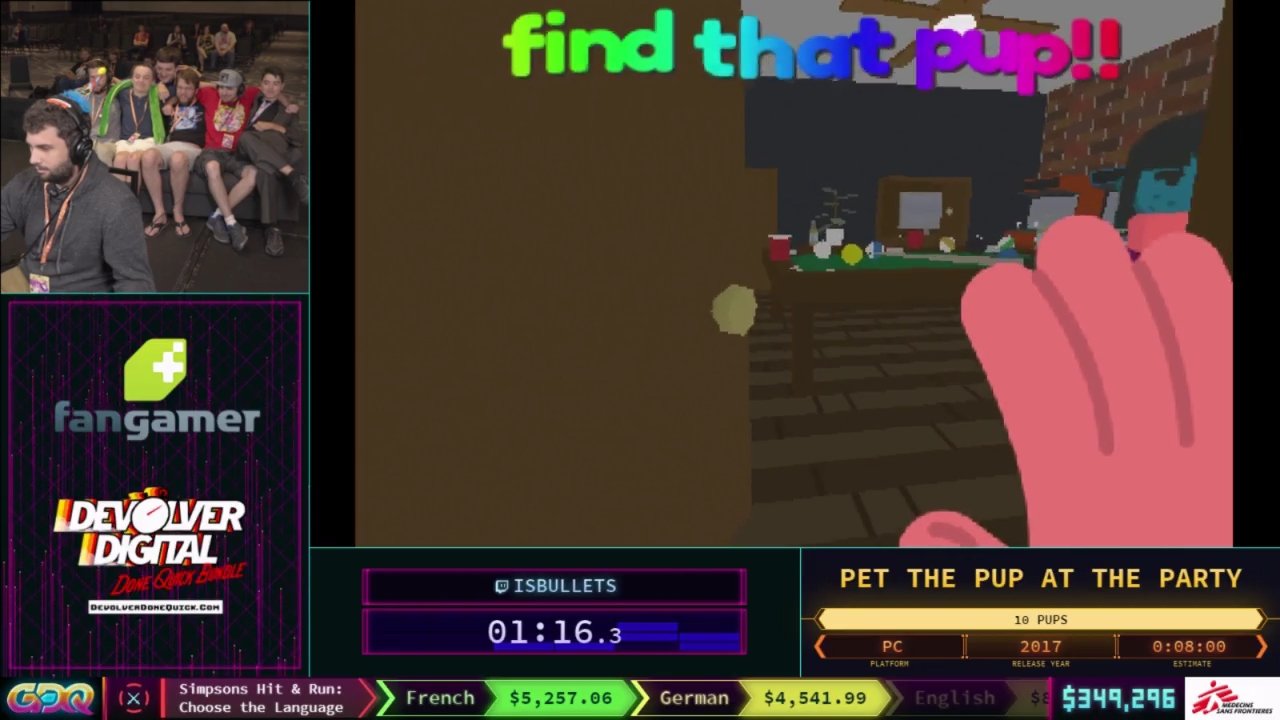 SGDQ 2018 day three was another awesome 24 hours of excellent speed running, all in the name of charity. The third day of this seven day long marathon contained the “horror block”, as well as several games in the Castlevania, Sonic, and Metroid franchises. There was tons of great tricks, insane saves, and plenty of impressive times. I missed a bit of the Castlevania block, so I recommend you check those runs out for yourself. However, I did watch a good chunk of the day, and can recommend plenty of fantastic runs to indulge in. With that said, keep in mind that I was not able to watch every single run, so this purely based around my own viewing experience.  Here’s my list of the best runs of SGDQ 2018 day three. 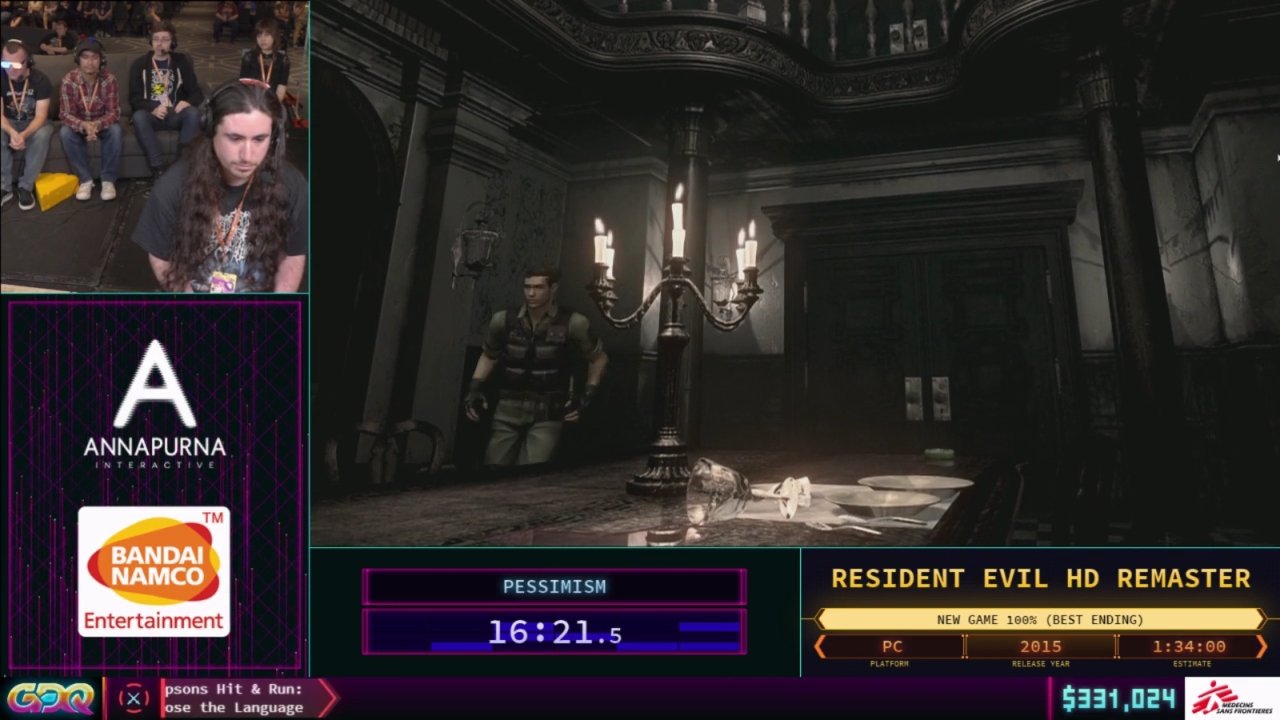 This run of the classic horror title Resident Evil HD Remaster was pleasantly offset by the rather chill runner, Pessimism. My enjoyment level of a speed run has a lot to do with the personality of the runner, and I greatly appreciated Pessimism’s constant positive attitude and laid back demeanor. Resident Evil HD is one of the few games that I’ve personally been able to speed run, so it’s easy for me to appreciate the amount of skill and practice that goes into learning the game. The run was full of clutch moments and surprisingly good RNG, with luck working in the runners favor. We got great couch commentary from CarcinogenSDA, who provided a lot of technical know-how and fun facts about the inner workings of the game.

Runner Maxylobes showed off this paranormal shooter by breaking out of bounds multiple times, hovering over entire levels, and floating on boxes. Like Pessimism before him, I greatly enjoyed Maxylobes’ personality, and his great explanation of the game’s tricks. He even demonstrated a recently discovered trick that cost him some time, but got us a great look at the evasive face of the antagonist, Alma. The fun physics tricks and impressive aim of Maxylobes made for a solid run, and a great followup to Resident Evil HD Remaster.

Pet the Pup at the Party (10 Pups) by Bullets

The concept is simple. You navigate around a randomly generated party searching for a puppy. Runner Bullets displayed his exceptional puppy-petting skills and peeled back the curtain on the inner workings of the game. For such a simple game, there’s quite a bit of pattern recognition and on-the-fly thinking in order to pet the puppy as fast as possible. The run is mostly mindless and kind of ridiculous, but all things considered, it’s an enjoyable 5 minutes of adorable puppy content.

This underrated Sega Genesis gem was ran by one of my long-time favorite streamers, peaches. Kid Chameleon was one of my favorite games growing up, and apparently it’s one of peaches too, as he took it upon himself personally to create a viable speedrun for this game. The game itself is a classic 90’s platformer with a rad attitude. You play as a kid in a white t-shirt and sunglasses, and his defining feature in canon is his level of coolness. The game has several different power ups that transform the main character into alternate characters, giving him neat and useful power ups. We got to see most of the unique transformations, and peaches used them to his advantage to quickly navigate the game’s branching paths with ease. This might be a nostalgic one for me, but I think the game’s mechanics still hold up and make it a super interesting run to watch. 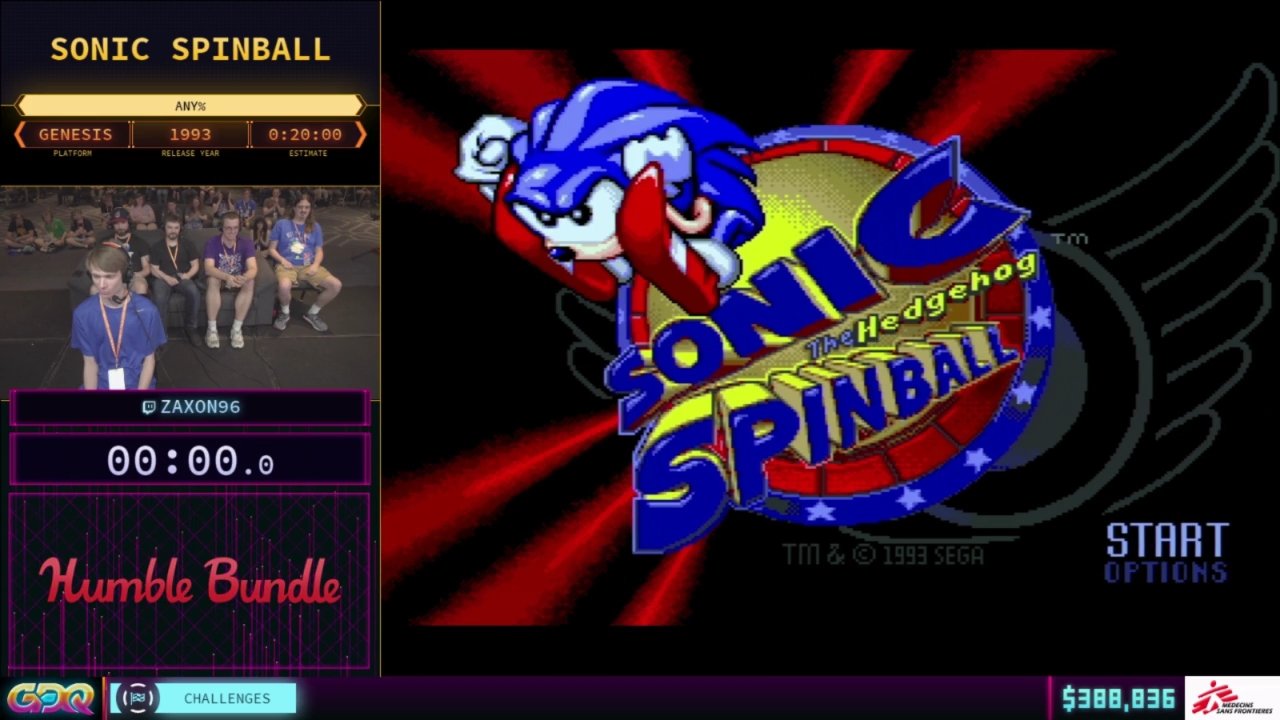 If you owned a Sega Genesis growing up, there’s a good chance you played this Sonic spin-off. There’s also a good chance that like me, you struggled to make it past the few two stages. This run by Zaxon96 was fulfilling for me purely based on the fact that I got to see this game played to completion. Although he managed to finish the four unique stages in under 20 minutes, the run was very much in the spirit of Sonic Spinball. The game fought him at every chance, like a sentient pinball machine that tilts in its own favor. He managed to do a major trick to skip the entire first stage, before accidentally falling and having to play the stage normally. He fell to the bottom of the stage twice in the second level, also costing him precious time. The third and fourth stages played out a bit well, although the final Doctor Robotnik boss proved to be a challenge still. All things considered, this is a great run that showcases a super unique spin-off.

Sonic the Hedgehog 2 by Mike89 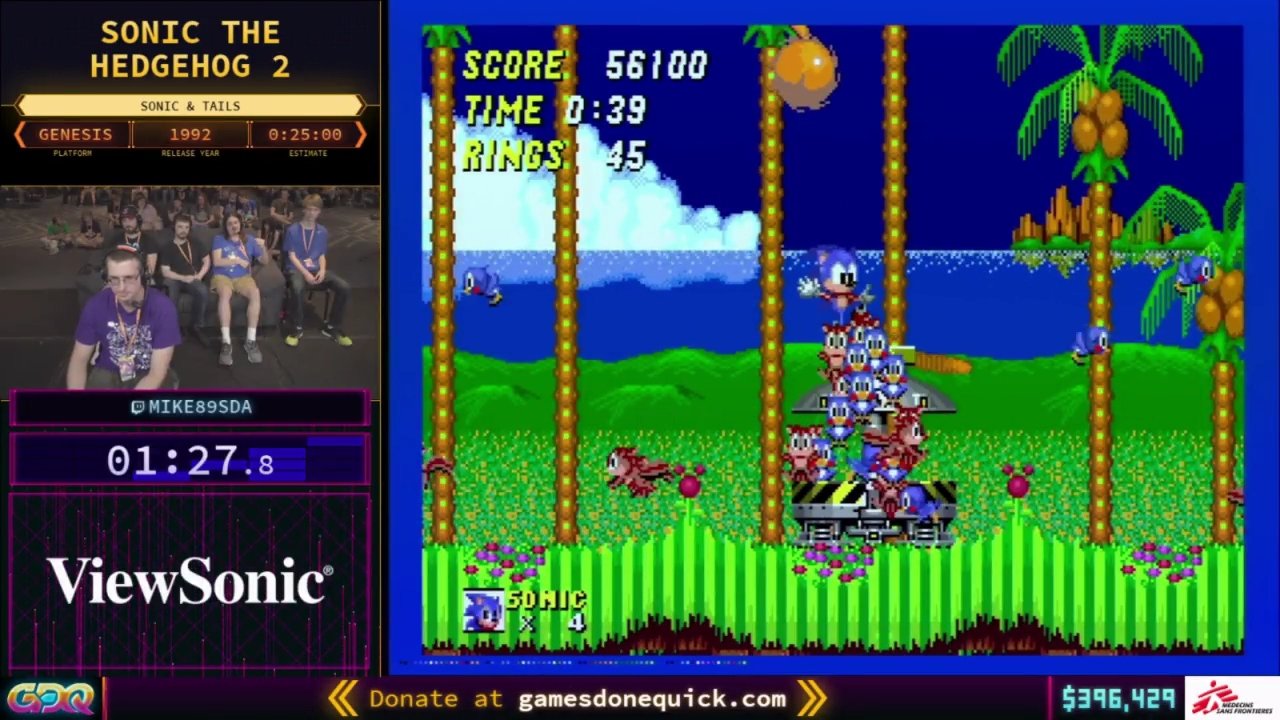 While watching runner Mike89 blast through Sonic 2, I felt like this was the way the developers intended for you to play. A normal game of Sonic 2 is pretty fast, but this speedrun was obnoxiously fast. Mike89 spin dashed, short hopped, and bounced his way around the many levels of the game with style. Most of the mistakes he made were very minor, and he ended up completing almost every level in well under a minute. Beyond the excellent movement tech and level memorization, Mike89 also pulled off a few awesome tricks. This included a zip, which involves forcing Sonic into a wall using a falling platform, ejecting out of the other side, and skipping half the level. He also pulled off a full level wrap, which allowed him to skip the entire level by using a physics glitch. This was an all around entertaining run and a perfect example of what the name speedrunning implies. 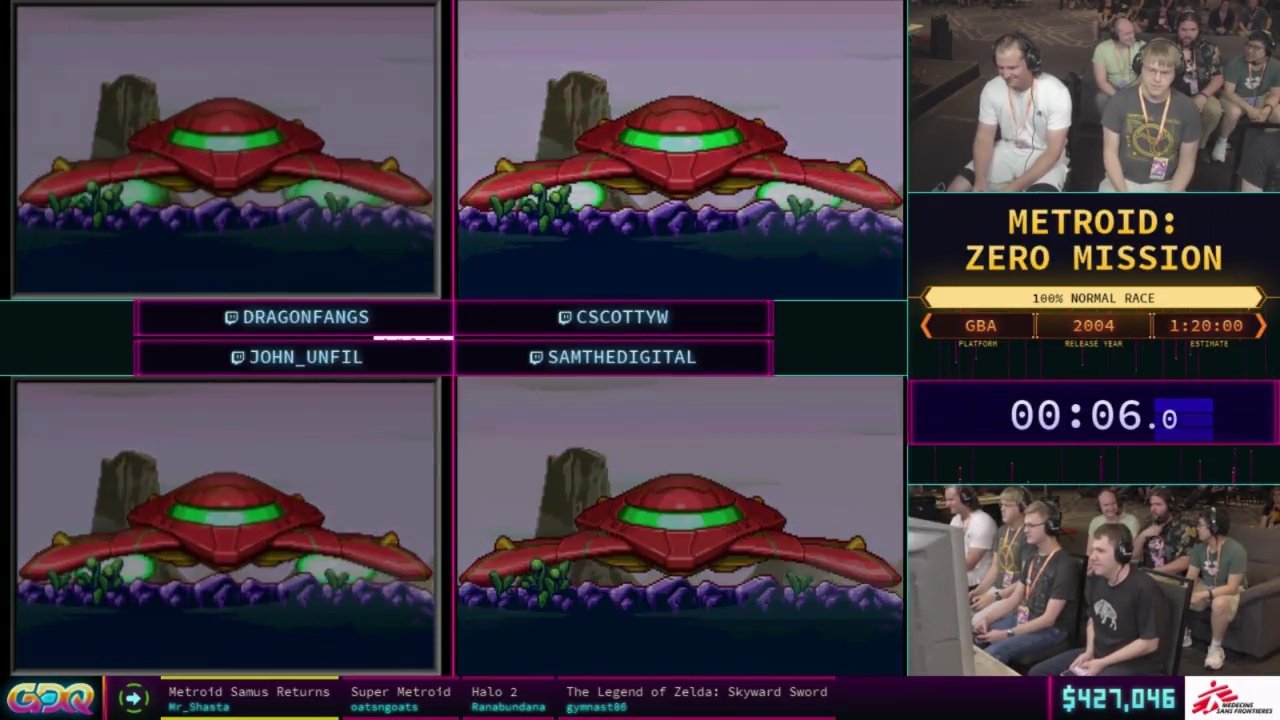 It was great to see this run at SGDQ 2018, as it hasn’t been shown off at a GDQ event it around four years. This year, four amazing Metroid speedrunners from across the globe took to the stage to engage in a 100% race to the finish line. Each runner took a slightly different route throughout the game, so it was a bit like watching four runs at a time. The lead shifted back and forth throughout the race, leading to some pretty tense moments. Unfortunately, runner DragonFangs fell out of the running about 26 minutes in when his Gamecube unexpectedly lost power. Besides this upsetting and abrupt end, the race stayed pretty close, resulting in a fun and exciting race. 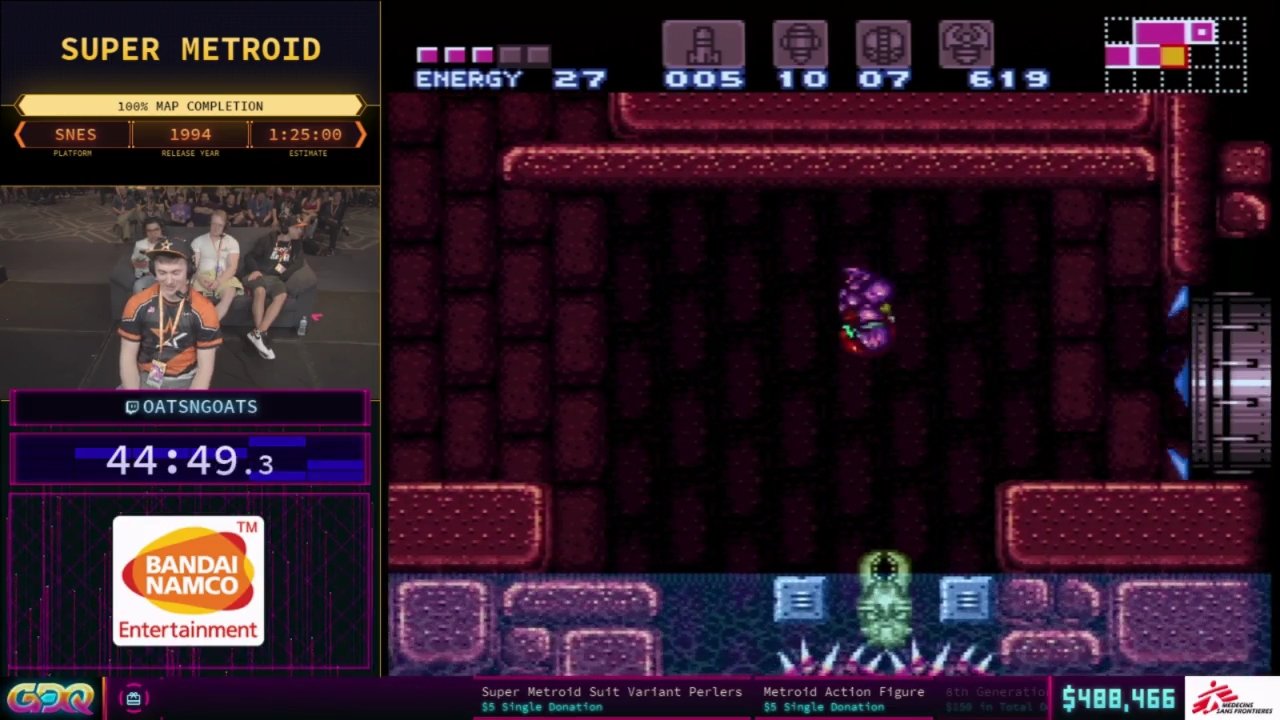 The runs of Super Metroid are usually one of the most anticipated runs of any GDQ event. This 100% map completion run by oatsandgoats lived up to the hype. There was plenty of awesome movement tech and very precise glitches, which is pretty standard for a Super Metroid run. However, oatsngoats was running the 100% map completion category, which is rarely seen at these events. This category was full of cool tricks, fun glitches, and we got to see the entire map! The excellent gameplay was almost overshadowed buy oatsandgoats’ excellent personality and his chemistry with the couch commentators. Throughout the speedrun, the runner and couch quipped back and forth, making absolutely hilarious jokes that had both me and the live audience in stitches. The runner deflected hecklers, withstood playful teasing, and generally made it one of the more enjoyable runs of the day. If you like Super Metroid at all, this is a must watch.

Just as oatsngoats neared the end of his Super Metroid run, the donation total hit $500,00. In under three days, the runners and staff at Games Done Quick have managed to raise half a million bucks for Doctors Without Borders. Despite the high totals that are gained every year, this is still no small task, and highly commendable. At this rate we’re sure to hit $1 million, but who knows just how high the donation total will go.

That’s all for day three of SGDQ 2018! There’s still three more days of speedrunning to enjoy, so be sure to check back for more recaps. You can also follow our twitter account (@official90skid) for live updates on our favorite runs!