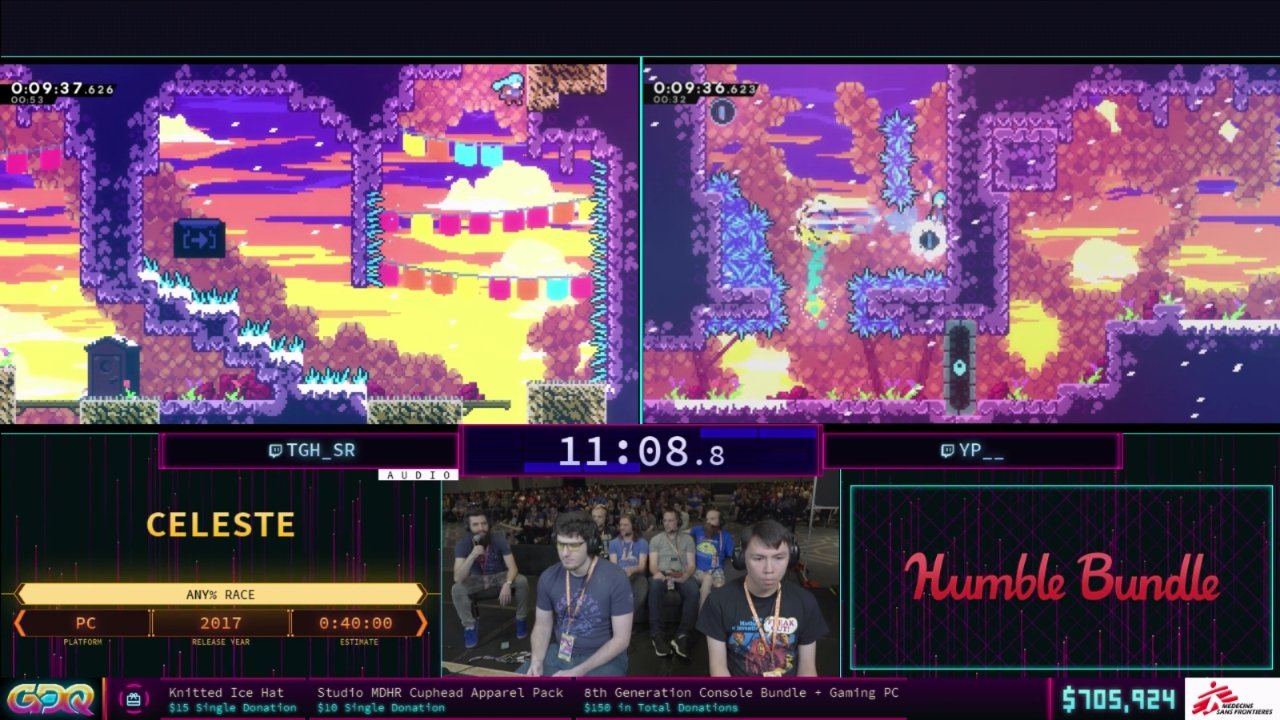 The fifth day of SGDQ 2018 brought us the “Silly Games Done Quick” block, a good mashup of games both new and old, and an excellent Super Mario Brothers block.  There was a bit of everything today, and as we approach the weekend, more great speedruns are sure to follow.  You can expect all the biggest games like Ocarina of Time and Super Mario Odyssey to pop up over the next few days, but the fifth day of SGDQ 2018 still had some incredibly impressive runs.  In fact, some of the speedruns shown today will go down in Games Done Quick history as the most impressive, wackiest, and entertaining runs to ever grace the stage.

With that said, keep in mind that I wasn’t able to watch every single run from the day.  I missed a portion of mid-day specifically, so I recommend you check out the full schedule HERE to see everything that was run.  If you want a good place to start off, check out my picks below for the best speedruns at day five of SGDQ 2018!

Celeste (race) by TGH and Yoshipro

I heard a lot of good things about Celeste when it first launched, but I never got around to playing it. I was still excited to see the much anticipated race of the sidescrolling indie gem, which did not disappoint. Runners TGH and YoshiPro dashed through the brutally tough game, all while the developers of the game delivered commentary from the couch. Developers will occasionally pop up at a GDQ event, and whenever they do, it’s a great time. The intimate knowledge of the game’s mechanics give the developers an excellent bank of knowledge to comment on, and they provided detailed explanations of most of the movement techniques. The game’s visuals are absolutely stunning, blending pixel art and vivid colors for a mesmerizing experience. The skill of both runners was unbelievable, and even to a novice of Celeste like myself, was impressive to behold.

Getting Over It with Bennet Foddy by Montyvstheworld 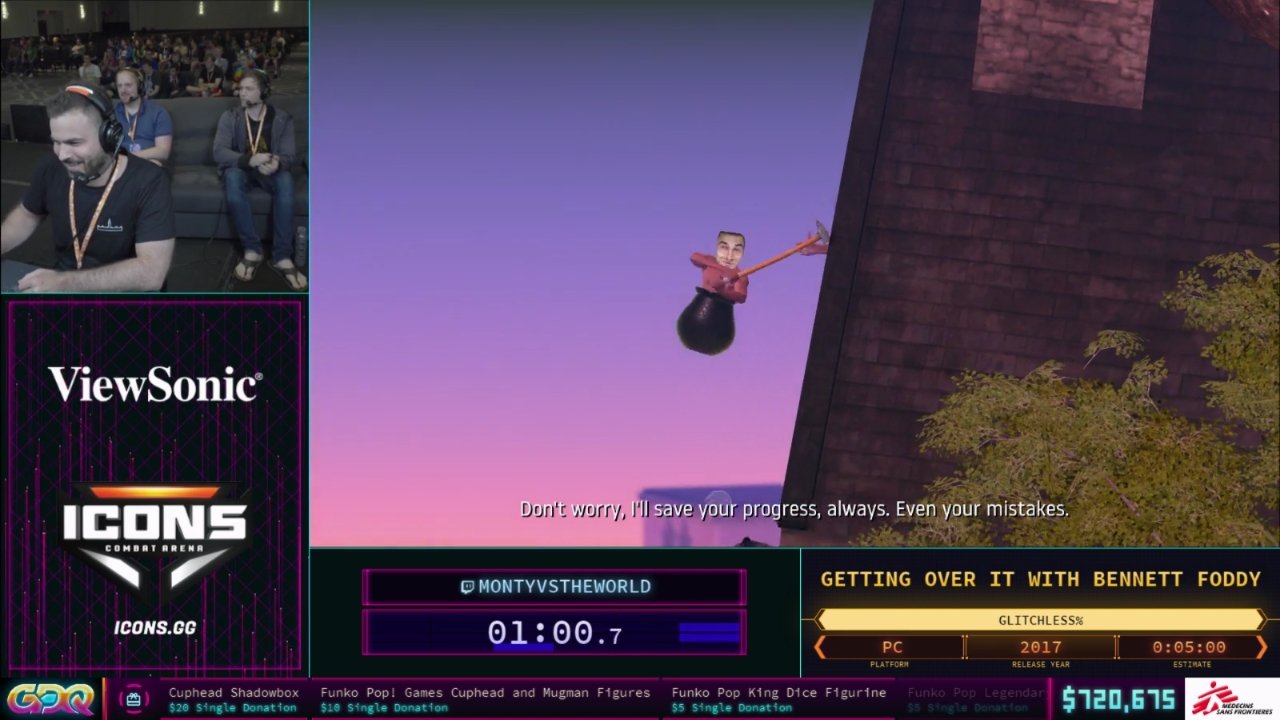 This run was quite entertaining for two reasons: the runner actually got to run the game twice, and it was all over in the span of 5 minutes. The punishing platforms (if you want to call it that) often takes players a dozen hours to complete on their first run. Runner Montyvstheworld was full of nerves, but despite this, sped through the precision-demanding game in less than 3 minutes. His run was full of energy and plenty of clutch saves. Whether or not you’ve played Getting Over It before, you should check out this short and hilarious run. 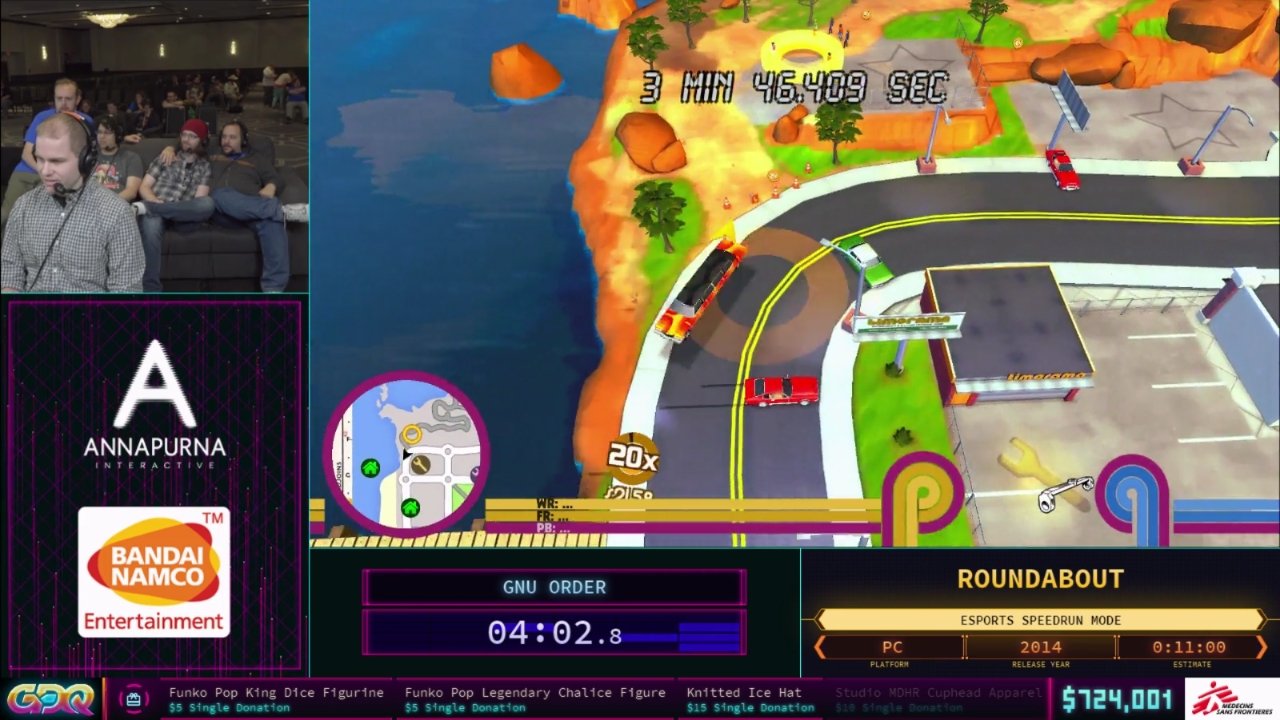 This run of Roundabout was part of the “silly games” block, which is an appropriate place for it. The game revolves around a limo driver who transports patrons across town in a vehicle that never stops rotating. The game is over the top and ridiculous, which is reinforced by it’s wacky live action cutscenes. We didn’t see those cutscenes though, as runner Gnu Order played the Esports Speedrun Mode, which is pure gameplay. The interesting commentary makes this an enjoyable, albeit brief run. 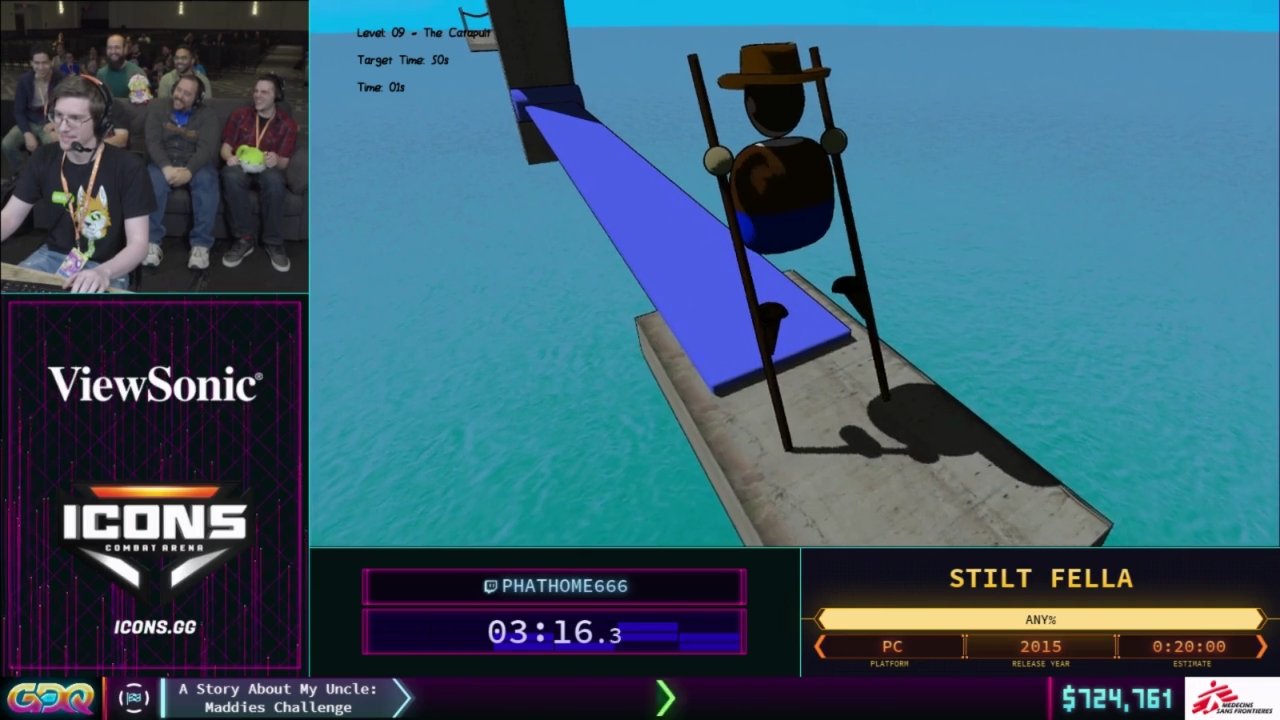 The “silly games” block is great for some absolutely ridiculous and perplexing games, and some of the time, a few really bad ones.  In my opinion, Stilt Fella falls hard over the line into the realm of “bad games”, featuring a single character in stilts that you must walk to the end goal.  There’s not much more to the game than that, besides the physics seemingly fighting the player at every chance.  Runner PHatHome666 giggled his way through the hilarious run, as he went head over heels with the man in stilts.  The audience cheered him on throughout, providing plenty of energy into the wee hours of the morning.  Generally speaking, the entire “silly games” block is well worth your time, with Stilt Fella being one of the stand outs.

Prey (No OoB) by Lifel1ke 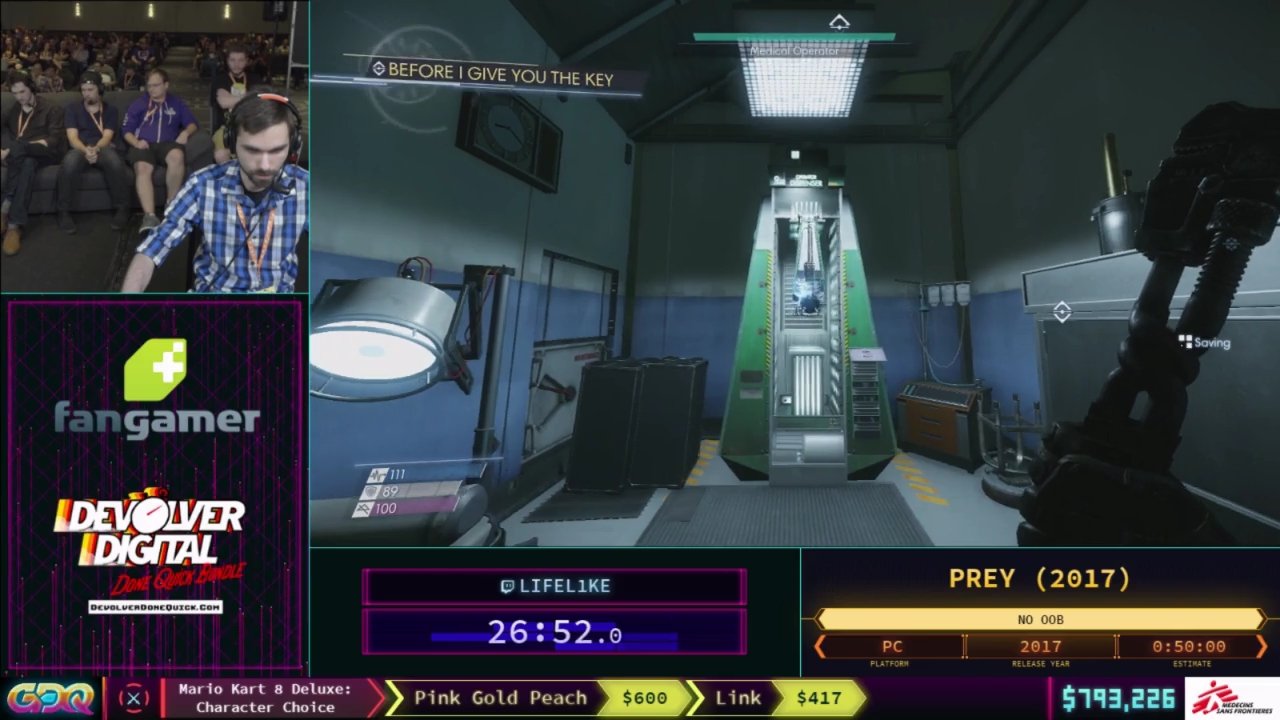 Prey is a broken game, through and through. This was made very apparent by a previous GDQ run, where the runner completed the game in under 15 minutes. That run used out of bounds for 80% of the strategy, and it was great to see. The Prey run at this year’s SGDQ is much different, as it strictly forbids going outside the game’s boundaries. Nonetheless, the run was full of amusing glitches and great routing, as lifel1ke bounced around the Talos 1 space station collecting items and skipping cutscenes. One major glitch involves bypassing doors before intended by shooting the GLOO gun at the door and then throwing a recycler grenade. This confuses the game, causing it to rip the invisible barrier of the door away, allowing the runner to pass. The routing memorization and glitch execution was definitely something to behold, and unlike past GDQ runs of Prey, we actually got to see a good portion of actual gameplay. 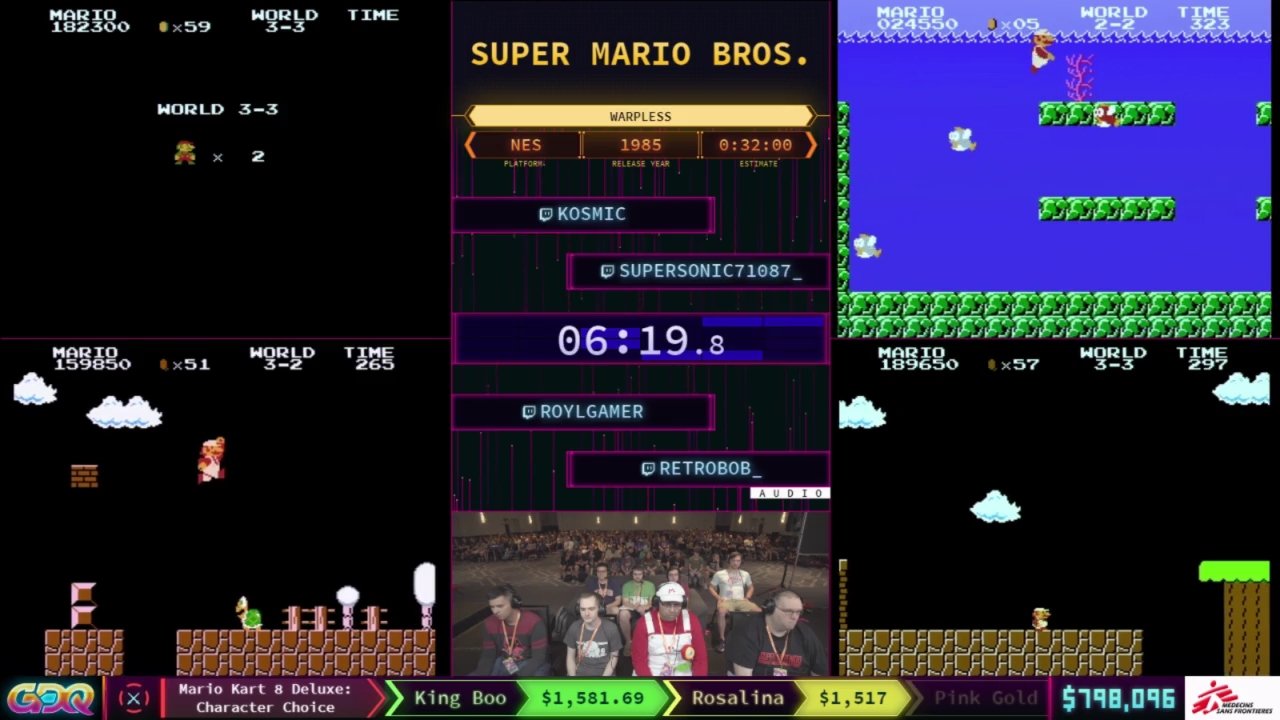 Some speedruns need little explanation. This four person race set some of the world’s best runners against each other, in a category that doesn’t allow for skipping levels. The race was exceptionally close throughout, with the leader position swapping frequently. Some upsetting mistakes led to surprising victories, and the glitches shown off blew my mind. Who knew you could wall jump in the original Super Mario Bros?

After winning the warpless race, Kosmic couldn’t help but show off some more. He did this by beating Super Mario Bros. using one hand. Not only did he accomplish such a fear, but he did it in around 6 minutes and only died twice. He also pulled off some incredibly tough tricks like the wall jump on his first try. One handed runs are always astounding to watch, and this run was certainly no different.

Super Mario Brothers 3 (All Forts race) by mitchflowerpower and GrandPooBear 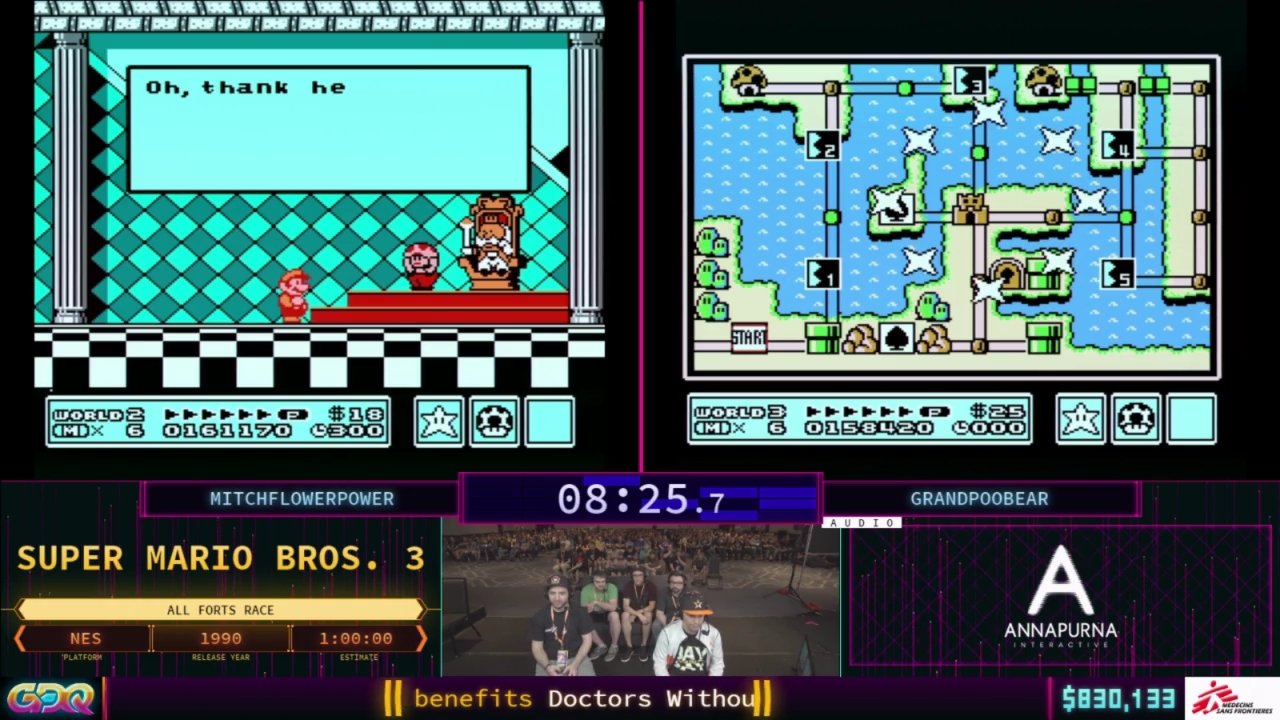 The Super Mario Brothers 3 race was incredible for two reasons. First, both runners are excellent SMB3 runners who showed off awesome tricks and glitches, as well as insanely precise movement. Second, the run was an utter mess. I say that in a good way though, as the numerous technical mistakes made for a surprising run that was anything but normal. Partway through the race, GrandPooBear accidentally caused Mitch’s game to freeze, forcing him to restart. This forced both runners to formulate an new route on the spot, so that Mitch could catch up and be properly equipped for the latter half of the run. This showed great sportsmanship on the part of GrandPooBear, who patiently waiting for Mitch to catch up. The run went smoothly from there, with plenty of laughter and cheers from the audience. Right at the very end of the run, GrandPooBear got frustrated and hopped out of his chair again, freezing Mitch’ s game for the second time. Since there was no time to restart, Mitch instead showed off an awesome glitch that completely skips almost 90% of the game. while it wasn’t a particularly smooth speedrun, the Super Mario Brothers 3 race was 50 minutes of hilarious antics and unbelievable mishaps.

As of the time of this writing, SGDQ 2018 has raised well over $900,000 for Doctors Without Borders, and that total continues to rise.  It’s just a matter of time before they break $1 million, which will likely happen in the early hours of day six.  For comparison’s sake, last year’s event raised $1,760,000 and change, so that’s the number to beat.  With huge games left on the schedule, there’s a good chance they’ll overtake last year’s total.

That’s it for day five of SGDQ 2018!  There are still two days of speedrunning madness left, so be sure to check back over the weekend for the rest of our recaps.  You can also follow us live on Twitter (@official90skid) for live updates on our favorite runs!