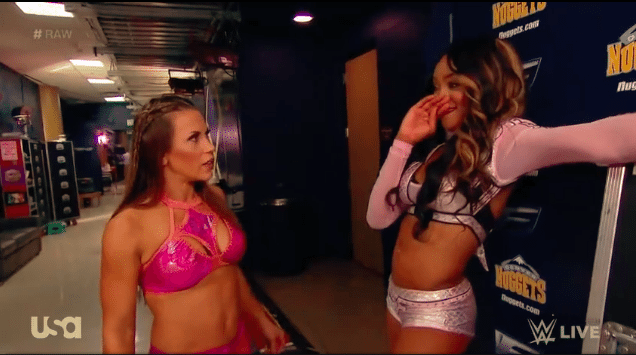 Live from Denver, the show starts with a moment of silence for the horrific Las Vegas tragedy. What looks like the entire RAW roster (including Vince) stood silently at the entrance, asking the crowd to do the same. The audio feed was muted, which I felt was a smart and effective move.

We see Reigns fighting off the Miztourage in last week’s match only to eventually succumb to their vicious beating., with Miz and co even heading back to the ring to continue pounding on the Samoan. The point was to get the crowd begging for a Shield reunion, saving their brother, which didn’t happen.

Rollins comes down immediately after the Reigns beatdown recap for some great foreshadowing.

Rollins told Ambrose last week that he wanted to be unpredictable, challenging Strowman to do so.

Can WWE keep Strowman looking like a monster without killing off too much of Rollin’s goodwill?

Rollins starts the match with agile ferocity. It’s a great way to start the show and a match with Strowman. Seth works very well as a small face underdogging against monster heels.

Rollin’s face turn several months back was horrible, but his tag-reunion with Ambrose has done wonders for rebuilding his star power. The crowd reacts strongly for him, chanting his name as Strowman beats him down.

Rollins gets control, finishing a string of offense with a great blockbuster, but Strowman kicks out at 1.

Strowman counters Rollins’ finisher and nails his own for the win.

Strowman hits a second powerslam. He walks away but decides to go back for a third.

Ambrose comes for the save

Ambrose puts up a valiant fight but eventually falls to Strowman as well.

The two baddies use this opportunity to beat on the 2/3 Shield.

Happy to see Rollins so over, with the crowd actually booing the usually popular Strowman. The match was longer than many opening segments, allowing Rollins to look better than many that are sacrificed to Strowman. Rollins and Ambrose came off as brave while Strowman looked his usual beastly self. Sheamus and Cesaro taking advantage of the situation was a nice touch. Though I can’t wait until these four never see each other again.

James’ outfit is showing way more cleavage than usual and she gets a loud reaction. She discovers a box of adult diapers and a walker in her dressing room. Alicia Fox and Emma are laughing (Fox’s stifled laughter sounds like a seagull with diarrhea).

James bangs on Bliss’ door but…

Bliss hides behind Jax and says she won’t face her…but Nia will.

More women and mid-card storylines are always welcomed. James is still a very useful talent and I enjoyed seeing more of her personality as a victim of  bullying from half of the RAW Women’s roster. It really feels like the odds are against her and I’m interested to see how she fares against Jax. Hopefully she can remain relevant after she inevitably loses.

Also, I love the production mixing in tons of crowd noise during the backstage segments. Or perhaps it’s the same audio level but the Denver crowd is just incredibly awesome.

The two go tit-for-tat in a short match. While on the outside, Elias attacks Apollo, Titus pulls Elias by the hair back onto the apron but Elias hits a neckbreaker on the ropes and his finisher once inside the ring.

Although a bit confusing, I like that Graves doesn’t automatically cheer for Elias, but instead sticks to his original hatred for the character.

Elias seems to be killing time but at least they have a semblance of a story for him, Crews, and O’Neil.

James is distracted by Bliss’ entrance and Jax hits her from behind to start the match. Jax dominates through the first segment.

James starts a comeback after the first commercial but Jax soon slams her to the ground, regaining control. James does a great looking kickout where she just slowly raises her body in pain.

James escapes a powerbomb attempt and begins a comeback, bringing Jax to her knees but Jax cuts her off again. Jame then hits a tornado DDT off the top rope and goes for the pin but..

Bliss interferes to save Jax

James and Bliss brawl outside and James comes out on top.

This was great! I love seeing James in this role as she’s plays a great plucky face. The match was booked very well. Jax looked monstrous but James could have gotten the scrappy win. The feud continues.

Young asks more about the entire cruiserweight division turning on him.

Renee thanks him, the crowd laughs, and the interview ends.

Amore may be divisive in the locker room but the guy has buckets of charisma and proved he can make silence interesting.

James tells the interviewer she wants to be champ and the crowd cheers.

He gives her a title shot at TLC

We’re shown a recap of an online segment, where AnderGallows called Jordan and Hardy nerds. Now they must wrestle.

Gallows is so good at strikes.

Jordan gets the hot tag, hurling the big heels around.

Gallows gets the big cut-off.

Gallows tries to cut him off but Hardy nails a tornado DDT, almost getting a three count before Anderson makes the save.

Using snappy teamwork and a slight distraction, AnderGallows get the win!

Gallows and Anderson win after a small distraction

Nice to see these super talented guys get a win. They’re hilarious enough to be comedy, but I’m glad WWE hasn’t forgotten about their insane in-ring talent.

Reigns isn’t worried about AmbRollins getting beat down.

He wants to break Miz’s jaw and win the IC belt.

Dana Warrior presents Pink Championship belts to three breast cancer survivors with most of the Women’s Division in the ring. Ultimate Warrior’s music hits and the three women shake the ropes with Dana.

Thank god the crowd has been so great. They helped make this a nice sentiment.

Prematch: Miz and his two buddies do the Shield entrance through the crowd.

Reigns goes outside and takes out the Miztourage during Miz’s introduction with superman punches, a drive-by, and tossing poor Dallas into the steel steps. He then grabs a chair and chases Axel back to the entrance ramp to beat him down.

Dallas helps out but is knocked down as Reigns nails them both with 2 million chair shots!

The Miz is terrified in the ring.

The crowd chants ‘Yes’ as Reigns stalks back to the ring.

Reigns tosses Miz around outside but Miz gets control with a slewfoot. They start off with intensity but Miz slows it down and appears to winded.

A few close two-counts on both sides after a Skull-Crushing Finale and a Superman Punch,

Reigns sets up for another finisher but…

The tag heels team up with Miz to beatdown Reigns. Will the Shield unite?

The crowd chants for the Shield, so the baddies give them a Shield powerbomb on Reigns. Complete with a fistbump.

Result: Reigns wins via DQ after Cesaro and Sheamus interfere.

This match had a great energy. I love that Reigns beat down the Miztourage before the match. It’s logical and makes him look badass. They seemed to lose some momentum as Miz either wanted to slow down or was too winded to do much else. They ended on a decent story progression, pushing a step closer to a Shield reunion.

Balor reminds Wyatt that he lost twice to him on PPV and calls him a coward, inviting him to try again.

Wyatt says the man doesn’t create the demon, but the demon fuels the man. He talks about peeling away flesh to reveal the demon and says that Abigail is alive.

He laughs and a visual effect puts a Ring-ish image of a dead girl overtop Wyatt. It’s creepy at first but Wyatt laughs too long with a cheesy female laugh overlaid.

Best Wyatt video promo I’ve seen in months. It got a bit cheesy but at least it held my attention compared to his usual random rants.

This time, the Women’s division talks about how great Asuka is over the highlight clips. Dana Brooks mentions how ‘stiff’ her strikes are. It’s weird seeing Becky and the other top Women hype up a women who could take the top spot and a big chunk of the limited time the Women get.

Banks and Bayley vs Emma and Alicia Fox

We get to hear Emma’s music for the first time in months. Fox is a surprise team-mate.

This was a solid match and I was most impressed with Fox’s snappy and ferocious in-ring work. I liked her scrappy rotating pin as she looked for rope leverage as well as her awesome chin-breaker.

The main angle here is that Emma wouldn’t tag in at the end, instead heading to the back. Bayley took advantage and nailed a Bayley-to-Bayley for the win.

A fun match and interesting development. I’d like to see more of Fox as her in-ring work has impressed me far more than Emma’s since I’ve been reviewing their show. I’m also impressed that WWE has finally managed to run a few simultaneous Women’s storylines. The more story the better.

Graves says Amore looks like he’s dressed to skiiing, and hopes he finds ‘that Bono guy’s ski-instructor’ (Sonny Bono died in a skiing accident). The other announcers crack up at this and try to stifle their laughter.

Amore talks about making the cruiserweight division relevant and also making it the main event two weeks in a row.

The crowd eats it up.

He talks about his no-contact clause, this time it means any cruiserweight will get fired if they touch him.

He goes nearly ten minutes until…

Neville’s music hits and the whole cruiser division comes out.

They surround him. Amore reminds them of his clause and insults each one again. It’s impressive compared to the usual stiff promos we see. Amore may be obnoxious but at least he can smoothly rock a mic and carry a segment on his own.

He introduces the newest member of 205 Live, who is exempt from the clause.

Kalisto storms down and attacks Amore.

Result: Kalisto is on 205 Live and is allowed to beat up Amore.

From low ratings and rumors of cancellation to closing out RAW two weeks in a row. I never would have guessed a Kalisto announcement would feature in the main event spot. Kudos to WWE for putting in a huge effort to save the division. It’s surprising to see given WWE’s track record with cruiserweights.

They do not fist bump.

An entertaining show. I like how many storylines they’re balancing and moving forward. We got a few solid matches and the Shield tease to end the show. The writing seems to have stepped up recently and I’m looking forward to more.