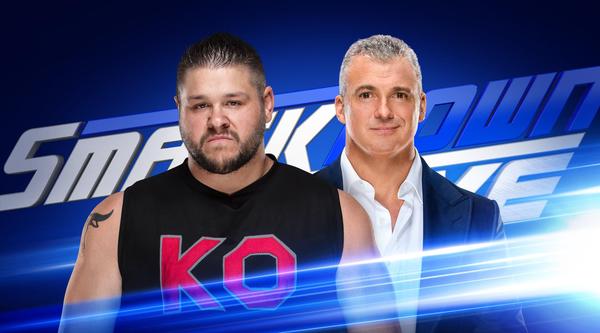 RAW was strong this week. Can Smackdown keep up? And more importantly, can they build the hype for Hell in a Cell this Sunday?

Losing regular Talking Smack with Renee Young sucked, so it’s nice to see her get a bit of ringtime.

Nakamura says sticks and stones will break his bones, but the words will never hurt. A few jabrones in the crowd yell out what in between his words, but generally the Denver crowd is excellent again.

Mahal attacks from behind!

Mahal used the introduction as a distraction, sneaking into the ring to beat down Nakamura.

Nakamura fights back but loses out to the numbers advantage.

Result: Nakamura beat down by Mahal and Singhs

Where’s AJ? Odd to see Nakamura left on his own so often with so many virtuous competitors in the back that shouldn’t let this injustice stand.

We see footage from earlier today of Natty warning Carmella not to cash in her briefcase tonight or Sunday.

The sound production is fantastic. Details are clear and the loud moments have a visceral feel. The crowd and wrestlers are very easy to hear, as I thought I heard Becky quietly murmur a spot after Natalya screamed at her ‘You’re pathetic!’.

The match is fun and evenly matched. Carmella hits Becky with the briefcase outside. Charlotte ignores Natalya to see what happened, allowing Natty to nail her from behind and slap on the Sharpshooter, getting the win.

Denver is my new favorite WWE city. They’re engaged in the best kind of way, elevating the talent rather than worrying about chants. It’s easy to see the energy it gives the wrestlers and everyone benefits from it.

Roode is facing Ziggler at Hell in a Cell this weekend.

This is how Roode’s first matches should have been booked.

Kanellis interrupts a glorious chant, angering the crowd and Roode.

Roode explodes with his spinebuster and lifting DDT, grabbing the early win.

Ziggy shows off another entrance, tossing confetti and blasting airhorns among other gimmicks. He says Roode is nothing more than a flashy entrance, accusing  him of using smoke and mirrors to weasel his way into the WWE after years on the outside.

Roode responds by saying Ziggler’s entrance sucked and shows him his one more time.

The Usos deliver another great promo. They dismiss New Day’s jokey attitude and highlight how great The Uso’s have been for the tag division. The crowd digs them, and it feels like a face promo. They don’t go for any cheap heat against local sports teams etc.

TND talk about how they can get serious. They mention the acclaimed matches both teams have had together. They even bring up being on the Pre-Show even though they had the best match of the night.

They say they’re going to leave The Usos in a pile of day one ish.

Result: We’ll find out this Sunday

The two have been battling for weeks over contendership to Style’s US belt. Corbin has been going through an arc of missing opportunities (similar to his real-life career lately) and cheating/interfering against Dillinger to try and get ahead. He mentioned last week he was done taking shortcuts, and now we see he gets another chance against Dillinger.

They have an evenly-matched contest until Dillinger reverses a suplex into a quick roll-up, stealing the win.

Styles says he’s happy to see Corbin squander another chance. He talks about how Corbin has the ability but not the heart, bringing up losing to Cena, failing to cash-in the MitB, and losing tonight. He lectures Corbin about taking shortcuts and temper tantrums and how they won’t work at HiaC.

English starts off in the ring with Rusev. Rusev hilariously says last week was supposed to be a happy Rusev day but Orton ‘ruuuuiiiiinnnnned it!’. But he’s not worried as there will be many happy Rusev Day’s to come, like when he beats Orton this Sunday.

Rusev distracts Orton to start, allowing English to get the early advantage. English nails a beautiful dropkick but it isn’t long before Orton hits an RKO outta nowhere.

Rusev thinks about challenging Orton in the ring but decides to leave.

Rusev is so charismatic, it’s a shame there were rumours he might leave. Hopefully WWE can build him after this feud.

Shane calls him a coward and decides to change the rules to their match. It’s now a Falls-Count-Anywhere so Shane can guarantee he gets a chance to beat KO.

Shane invites him to to the ring.

Shane calls him a coward and chases after him into the crowd.

The camera follows him into the foyer and…

They brawl in the arena near the concession, giving a taste of their Falls-Count-Anywhere match.

Owens walks back to the ring for a promo.

He says he’ll grind Shane’s flesh off and throw him off the Cell.

Shane hobbles back down the stairs towards the ring.

They brawl outside the ring. Shane dives off the barrier. Ko comes out on top with a superkick and headbut. Multiple refs try to stop him as Shane continues to crawl towards him.

KO gives him a pop-up powerbomb and walks away. Shane half sits up and points at Kevin to end the show.

I could be imagining things but it seems like the audio/visual quality increased. The sound was loud and mixed very well and the camera seemed to move with the high impact moves. The Denver crowd amazing and we saw multiple storylines progress. The matches were short but the focus was on story, exactly how it should be, with the longer matches on PPV as a reward and blow-off.