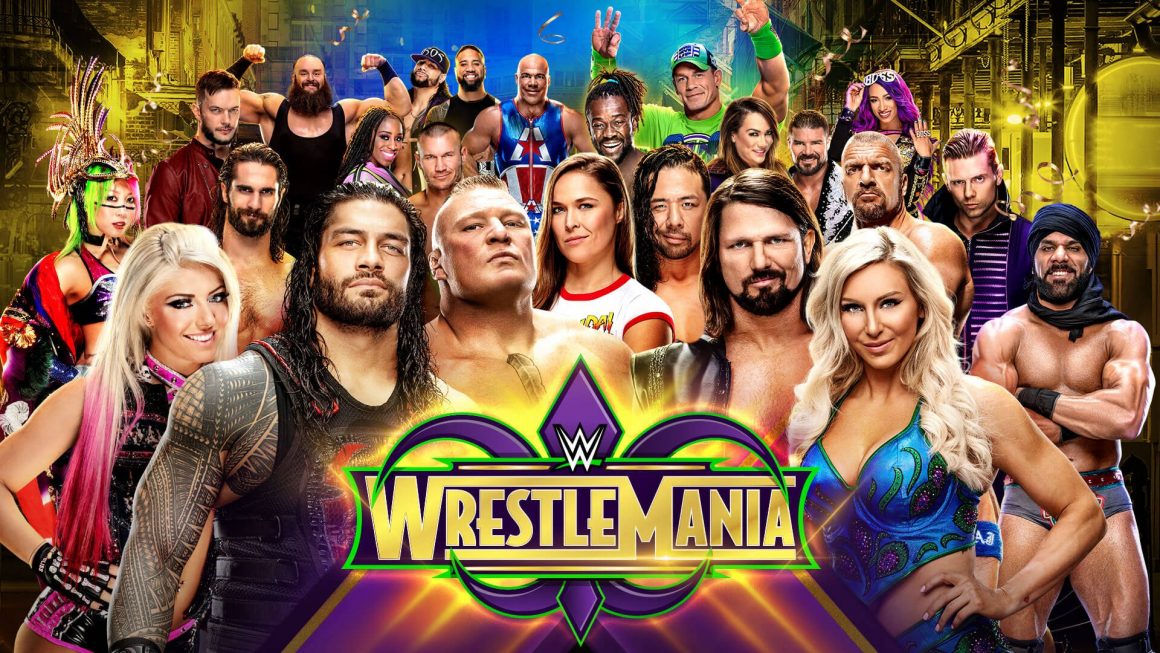 For wrestling fans, Wrestlemania weekend is Christmas giving the Super Bowl a hurricanrana off a ladder to the outside through a table on top of the Spanish announce table. The year’s storylines are supposed to lead up to this moment and payoff in a spectacular manner, resetting for the next season’s direction. The only thing more fun than watching, is speculating.

The Battle Royale is an easy way to get a big chunk of the roster on the most important show of the year. It could be used as a great launching point for young talent looking to hit the next level, but the last few winners have struggled mightily. Dolph Ziggler signed another contract after years of complaining of his low position. Although it probably won’t mean much, he’s a possible candidate. Tye Dillinger was featured often this past season but didn’t manage any big wins, so he’s my pick.

WWE has struggled to maintain more than one women’s storyline per brand and Sasha and Bayley are one of the few girls with anything interesting going on. They’ve also both done interviews with sports and entertainment publications about their feud and lack of a single’s match. We’ll most likely see them and Becky in the final spots, with some kind of confrontation resulting in Sasha winning. Bayley and the woefully underutilized Becky Lynch are too goody-two-shoes to win from a turn, so Sasha will most likely come out on top.

I don’t follow much 205 Live but Cedric seemed to be heavily featured during the Enzo era, so I’d imagine it makes the most sense to continue with him, barring any incidents of him throwing things through a WWE bus window.

The Usos could be due for a loss, the New Day might be headed to a breakup and the Bludgeons have been promoted as dangerous. It might be too early for the Hammer Brothers to win the title, especially with so many potential title changes on the card though, but I’m thinking WWE might go ahead and set a record for title swaps.

The Bar (c) vs Braun Strowman and TBA

Braun has been built far too strong to lose, but the identity of his mystery partner could greatly influence the outcome. Will they come out with him or run down later in the match? Will it be a comedy partner like Curt Hawkins? A nostalgic surprise like Rey Mysterio or Goldust? A debut from NXT? Perhaps an enemy for Braun to feud with: A Kane to his Undertaker.

A lesser partner can take the pin in a loss, but from the buildup I think the partner will be substantial and Strowman will either win or lose from the partners interference and begin a feud with them. Tough call with the mystery component but Braun is the safe bet. Every title changing hands!

Rusev apparently asked for his release earlier, prompting his addition to this already crowded match. I can see why. Rusev is gigantic, talented, and over with the fans, yet can’t get any traction going. Orton might be taking a break, Roode has already had his belt run, so Mahal resurrecting yet another foreign US Champ gimmick is Rusev’s only competition. WWE has invested so much in Mahal that compromising with him as a second-tier champ sounds like WWE thinking. I’d love Rusev to win but I also doubt WWE will give him a belt immediately after asking to leave.

The Miz just had a baby so he might want to make like a Steamboat and get out of there for family time. Seth Rollins has middled around in the tag division after WWE butchered his face turn. It’s hard to remember that Finn Balor was the first WWE Universal Championship until a badly timed injury halted his push. They could either use the IC title to start his road back to the top or give it to Rollins, perhaps getting Balor to Smackdown to feud with Styles of Nakamura (depending on the winner).

Balor could bring huge prestige to the IC but I’m thinking Rollins has nothing to do and will slot into that spot instead.

Rollins with Balor moving on to bigger and better

Bryan’s huge return will either result in a win or him getting screwed over. Shane could cause an issue, allowing the two to feud into SummerSlam but Shane joining Owens and Zayn seems like a terrible fit considering the wars they’ve been through. Since WWE books Shane as a superhero maybe he’ll turn on all three, beating them all down and walking away as a heel.

It’s hard to predict Shane matches as the WWE has a strange idea of his character. He acts incredibly heelish towards Owens/Zayn but is considered the good guy in storylines. He’s also a MacMahon so anything is possible.

The current story sees Bliss and James bullying Jax about her size. It would make sense for Jax to get her revenge here but there’s still plenty of ways for Bliss to weasel out of a loss.

The match should be great as Bliss is an incredible coward heel and I can already imagine the fun spots we’ll see of Bliss running in fear and using under-handed tactics to get the advantage.

However, the WWE is super high on Bliss, featuring her heavily and I predict she’ll find a way out without losing the title. With this many title changes already, this might be the spot where it stays put.

WWE’s Youtube channel has a ton of Asuka videos showcasing her personality, which seems to be a dead giveaway they’re getting the fans prepped for her title win. Charlotte is a natural heel, and a loss here could let her switch back to the dark side or even brands for a freshening up.

Seems odd to have Cena come out for weeks on TV screaming challenges at Undertaker and not have these two meet. After taking off his Undertaker garb following his Roman Reigns loss last ‘Mania it seemed obvious he was retiring, but could he come back as the American Badass instead? The show is already long enough without including another lenghty main event type match but perhaps ‘Taker in some form will attack Cena after a bell gong for a mid-show wakeup.

Undertaker surprises Cena with a beatdown

Kurt Angle and Ronda Rousey vs HHH and Stephanie McMahon

Rousey is WWE’s new toy so I’d assume she starts strong with a submission over Stephanie. But Stephanie finding a way to screw her, leading to an Austin/MacMahon type relationship is also interesting. Whatever happens, Rousey and HHH will look strong.

If Nakamura loses here, where does he go? Why build him up in the Rumble only to let him flounder somewhere else? This should be match of the night and since Styles has already had a lengthy run, I predict Nakamura takes it in a classic. Styles can possibly go to RAW in a shake-up or have someone from RAW screw him over in his championship rematch, setting up a feud. I’m sure many fans wouldn’t mind the usual few rematches between these two.

With Lesnar getting older and Reigns hovering at the top of the roster since his first Rumble win in 2015, it’s probably about time for WWE to pull the trigger on the Big Dog. Reigns has pushed through bad writing that ignores his natural charisma, and remained a good soldier when dealing with punishments. Lesnar always seems to want to go back to MMA and the fans might soon tire of his part-time shtick. Unless Carmella cashes in, Reigns will win.

This year’s Royal Rumble surprised everyone with non-American fan favorites Nakamura and Asuka winning their respective Rumbles, setting up dream matches at this Mania. Could HHH be starting to take over the main direction? He is booked with their hottest new acquisition Rousey after all. 2018 started on a high note but fans might still hold their breath until the final bells ring.