After a brief break in from the release of the StrangerVille game pack, EA announced at EA Play at E3 this year their seventh expansion pack for The Sims 4. Island Living is one of the much anticipated tropical themed packs for The Sims 4, after the popularity of The Sims 3: Island Paradise. Retailing at the new price of £34.99, the expansion pack promises a whole new neighbourhood with the theme of island living and nautical fun for your sims to explore. With new nautical themed CAS items, build mode objects, and some new gameplay elements, if you’ve ever wanted your sims to live the topical lifestyle, then The Sims 4: Island Living might just be the pack for you.

As always with expansion packs, Island Living comes with a small collection of hairstyles, makeup, clothing, and other cosmetic accessories. Similarly to every pack in existence for The Sims 4, there are more options for sims who prefer the female fashions than male, but that’s to be expected at this point. The hairstyles for female fashion are all very mermaidy looking, with long flowing or curly hair. There are a few exceptions, with some ponytails, mohawks, and buns, but overall the hairstyles are definitely keeping with the theme.

The male hairstyles are similarly tropical looking, but with fewer options. There are a couple of hats to choose from, along with new jewellery and a couple of face paint options. There’s quite a fair amount of new clothing options, including new tops, bottoms, and full outfits. These are all very summery looking, along with some more traditional looking island outfits. I really like the clothing options in this pack, although the clothing options are now pretty heavily weighted towards summer seasons in the game which isn’t necessarily a bad thing if you don’t own Seasons. I can easily see myself using these clothes frequently in my game, and not just in the new neighbourhood.

To fit with the island theme, you can now build houses on beaches. This means you can extend your home over the ocean with the use of stilted foundations which are included in the new free update for everyone. There are a small collection of new windows, doors, and fences with a tropical theme for you to play with, in addition to new wallpapers and flooring.

By far the biggest selling point for the build mode in this pack is the fact that you can build over the water and on the sand. Not only is this aesthetically very pleasing, but it also enables your sims to interact with the ocean in new ways. Your sims can jump directly into the water from their deck, or stroll right onto the beach from their front door. You can also add a ladder to your decking so your sims can climb back up onto the decking after being in the water.

There are over one hundred new build mode objects for you to create your island homes with. Some new island-themed objects include boats and jet skis for your sim to use. All of the furniture objects look very obviously tropical, which is great for this pack but I’m not sure how versatile these will be in other worlds. However, the objects look great within the context of Sulani.

Also included in this expansion pack is the neighbourhood of Sulani, a collection of small islands. The neighbourhood isn’t huge, with a total of three separate islands; Mua Pel’am, Ohan’ali Town, and Lani St. Taz. Each of these islands has its own style, with one being an upmarket residential vibe, one with a town centre, and the other being a conservation area. There are fourteen lots available to build on across these three islands, which more than recent packs. The pre-made lots found around the world are well made, clearly showing that the Sims team have been paying attention to the criticism from players.

On Mua Pel’am, there’s a volcano which can’t be interacted with but provides a beautiful backdrop to the island. There’s also a waterfall that your sim can shower or woohoo in. The nature reserve of Mua Pel’am also plays a heavy role in the conservationist career. The island has its own health system that players can directly affect by either improving the ecosystem of the island. 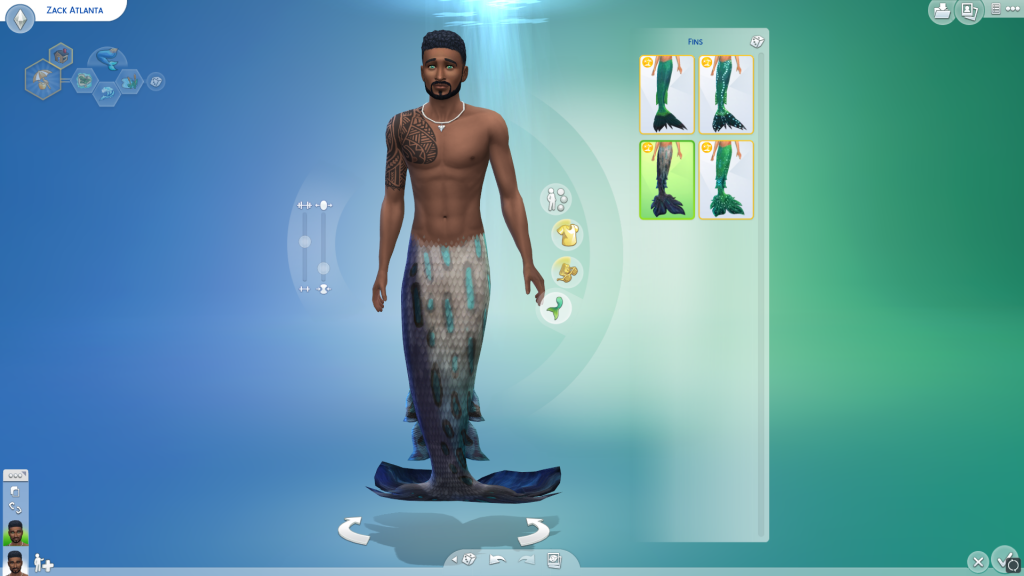 In terms of new gameplay mechanics, there’s one new aspiration in the Location branch called ‘Beach Life,’ which makes your sim want to live a more relaxed lifestyle by the sea. The aspiration goals for this are all themed around doing activities on the beach. The reward trait for completing the new aspiration is actually pretty helpful, as it stops sims from getting tense. In addition, there are two new traits called ‘Child of the Islands,’ and ‘Child of the Ocean.’ Child of the Islands causes sims to want to commune with the elementals of the island and honour its traditions. Child of the Ocean, on the other hand, causes sims to feel closer to the water than other sims and makes them want to interact with the ocean and all of those who dwell within it.

In the ocean, there are dolphins that you can build friendships with, new fish, and of course mermaids. You can create mermaids in CAS, like vampires, or meet them in the world. There’s also a new lot trait which brings island spirits to your home and if you connect to them positively they can give your sim special boosts.

There are a few new careers, including the stay at home conservationist career for your sims to earn money from, along with new social interactions and parties. In terms of new activities, your sim can sail or swim around the ocean in each separate district to their heart’s content. Be careful not to have them spend too much time in the sun, however, as sims can now get tans and be sunburnt. For those of you with Seasons installed, there are also new weather options, with monsoons and varying temperatures in different seasons compared to the weather in other neighbourhoods. The interaction between expansion packs is a very nice touch from the developers, and it makes the whole game feel very coherent.

One of the most anticipated life states – behind maybe vampire – is the return of the mermaid sim. Like I said earlier, you can create a mermaid straight from CAS this time around, or turn into one during gameplay. You can customise the colour and design of your mermaid’s tail, and have separate makeup and hairstyles for your sim’s mermaid form. Unlike The Sims 3: Island Paradise, mermaids do not have scaly legs when on land anymore, meaning it can be harder to find an elusive mermaid amongst the NPCs. This makes trying to befriend a mermaid and be turned into one much harder than say turning into a vampire, as they are much less obvious.

Non-mermaid sims can be transformed by giving them magical sea kelp that can be acquired through befriending dolphins. Mermaid sims can also summon all NPC mermaid sims within a certain distance, making it helpful to identify fellow mermaids. You can always ask a sim if they’re a mermaid, but their response will depend on your relationship with them and they can lie to you. Mermaids have a hydration need that must be maintained, but you can easily keep this satisfied by making them swim around. Mermaids can also drag sims down to the depths of the ocean, so don’t be fooled by their enchanting singing voices. I’ve been waiting for mermaids to return to the Sims franchise since The Sims 3, so I thoroughly enjoy playing around with my aquatic sims.

The Sims 4: Island Living might just be the perfect expansion pack for the Sims to kick off your summer. The new world is beautiful but very specific in its aesthetic. If you’re not a fan of the tropical theme then this pack won’t offer much in the way of versatile gameplay. The CAS items are great, particularly the hairstyles, which can be used with whatever combination of expansion packs quite nicely. Build mode is also very specific, so while it fits in perfectly with Island Living I’m not sure how much I’ll use them outside of the islands of Sulani.

Overall, I really enjoy Island Living. As someone who loves the tropical theme and swimming in real life, this pack is a breath of fresh air that serves as an excellent addition to the already existing DLC available for The Sims 4. If you’re looking for a new pack that will bring hours of entertaining new gameplay as well as a new life state to play around with, then The Sims 4: Island Living is just the pack for you.