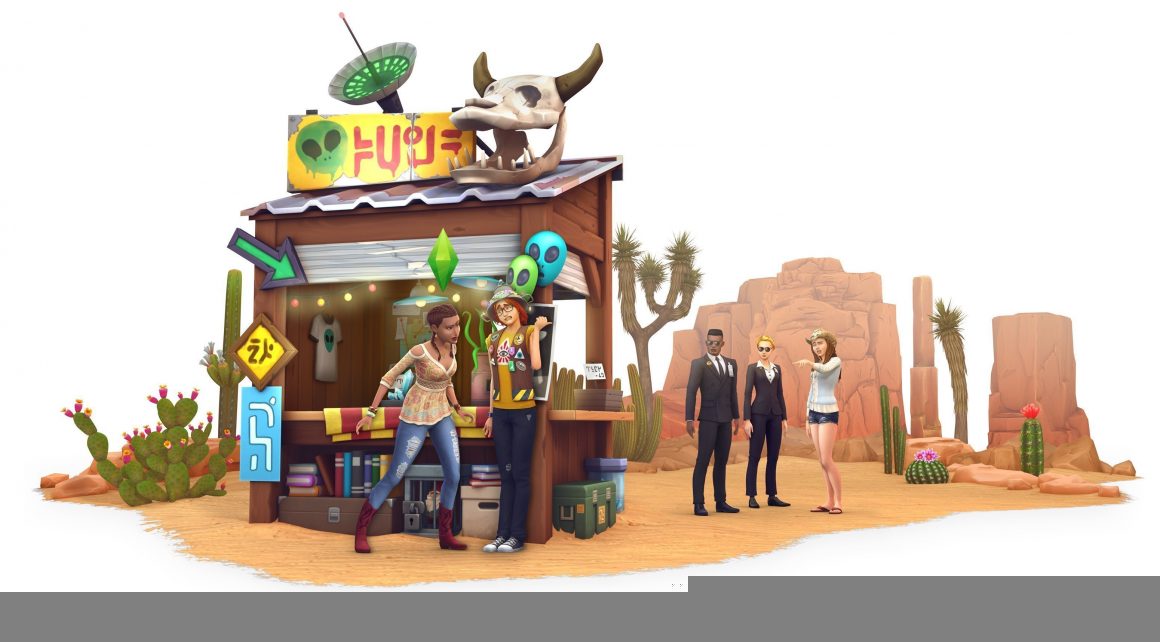 After possibly the strangest PR stunt on Twitter, EA launched The Sims 4: StrangerVille, the 7th Game Pack for The Sims 4. Unlike any other pack previously released for TS4, StrangerVille is a story based pack, providing players with the opportunity to unravel the mystery of a series of odd behaviour in the new town of StrangerVille. The pack retails at £17.99 GPB or $19.99 USD on PC, with a later release for PS4 and Xbox One expected later this year.

StrangerVille is heavily inspired by areas such as Area 51 in Nevada, with lots of military and conspiracy theorists themed items of clothing in CAS. For once, I actually prefer the masculine style clothing to the feminine style with this pack. The feminine style is very country, while the masculine is more military themed, including a pretty cool looking bomber jacket. Of course, you can now choose whatever style for your sims, but it’s nice to see the Sims team cater a bit more to male sims for once. Most of the items included in the pack are for adult sims, with 40 new CAS items included. I really like the military and country themed items, and I can see myself using these frequently in my game. There are a few new hairstyles as well, including new dreads, buzz cuts, and some French braids. 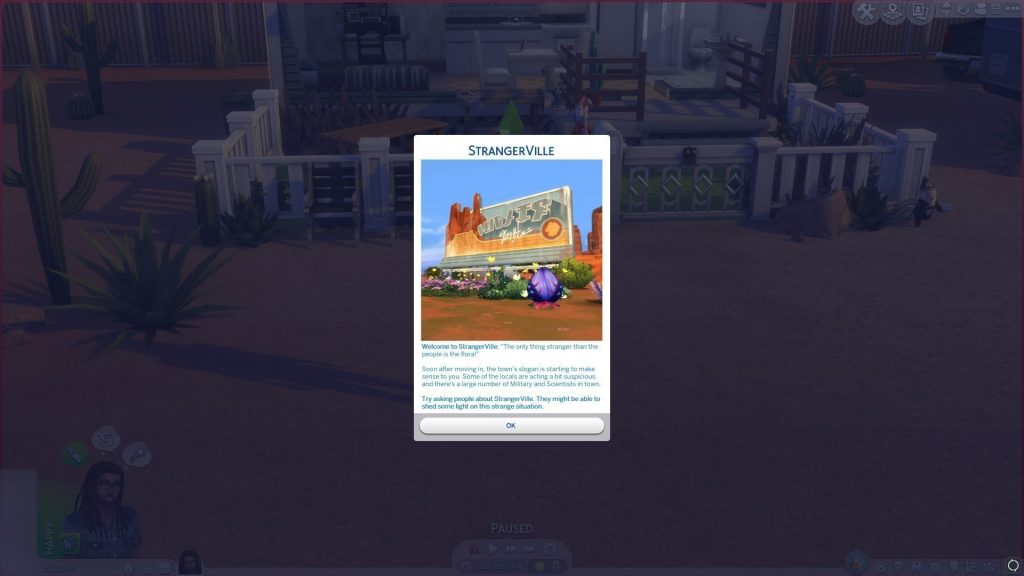 Build Mode is really where StrangerVille shows off for me. This game pack finally sees the return of laptops in the series, with two laptops which can be put in your sim’s inventory and used on the go. If you’ve ever wanted to simulate working on deadlines while injecting caffeine into your veins at your local coffee shop, then StrangerVille finally has your fix. There are just over 100 new items to choose from, including some military and country-esque themed objects. Particularly fun is the new combat robot, which can be used to spar with and helps increase your performance in the new career. Most of the items look a bit run down or seem like they would fit perfectly inside a desert trailer park. The Sims team have been long criticised for having too many clean looking objects, so if you strive for realism in your game then these objects may just help scratch that itch.

The main feature of this pack is the new story mode. Without spoilers, StrangerVille pretty quickly introduces you to a strange phenomenon sweeping the town. Sims will walk like they’re straight out of a Monty Python sketch and will talk insistently about The Mother. The new aspiration included in StrangerVille guides players through the story, with each milestone guiding you in the general direction of what it wants you to be doing. The story isn’t very long, but I really enjoyed playing through and solving the mystery of the town. If you’re concerned that this strange plague will affect your other towns, don’t worry – this strange behavioural pattern is exclusive to the new neighbourhood and won’t affect your gameplay much at all if you don’t fancy playing through the story.

Military personnel, scientists, and conspiracy theorists occupy the neighbourhood, all of whom will aid you in your detective work if you can sweeten the deal for them (yes, you can seduce NPCs to get information). To further aid you in your detective work, you can plant bugs on sims and listen in on their conversations to gather evidence or to blackmail them for money. There are also curios in the world from which you can buy an assortment of items to help you out, including a tin foil hat and a lava lamp. Once you’ve completed the story, you can also start it all over again by interacting with a certain key story object if you want to run through the story with another sim in the same save file. 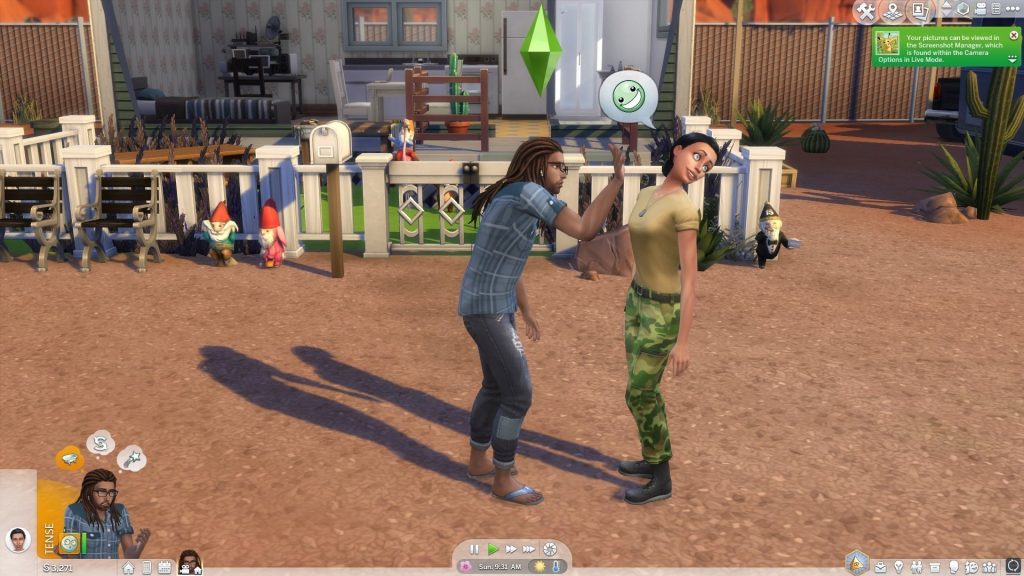 Given that the story is the biggest appeal for the pack, I was initially concerned that once you played through it the appeal would ware off. Unlike other linear style packs like Jungle Adventure, StrangerVille includes a new neighbourhood with 9 residential lots to build on. The new neighbourhood is heavily inspired by StrangeTown from The Sims 2, so if you’ve been around for a while like we have then it feels like a nice homage to one of the most iconic Sims worlds in the franchise. In addition to the new neighbourhood, a new career has been added to the game too. The military career makes a return to the series, giving sims certain benefits in the StrangerVille mystery as well. Another addition to the game is a new trait for sims to have called Paranoid. This makes sims uneasy around strangers, and gives them a strong preference for being in basements. You can accuse sims of spying on you, share conspiracy theories, and have them become uncomfortable from their own paranoid thoughts.

Initially I had my doubts that this pack would be worth the purchase given that it’s a pretty linear story. My fears, however, were quashed when I realised how much content StrangerVille has on offer. The CAS and Build Mode items are a great addition to the game, fitting in with preexisting packs and neighbourhoods nicely. The new windows and doors have been deliberately designed to match colour swatches from base game items, probably making it the most compatible pack on offer. The story is quirky and weird with the perfect amount of humour and hints to stop it getting boring. StrangerVille really surprised me with how much it brings to the game, and if you don’t mind paying the steep price for a game pack, then I would definitely recommend it.