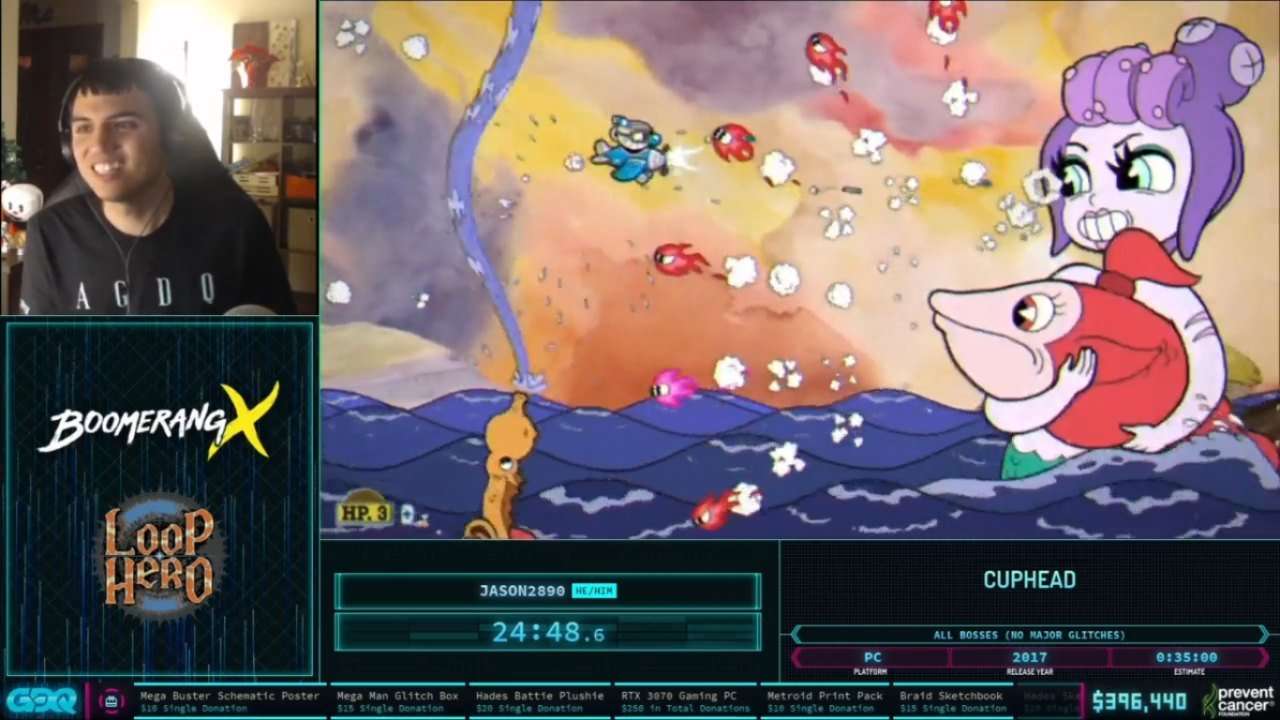 Day three of AGDQ 2021 was one of the most satisfying days yet, packed with speedruns from a huge assortment of genres, time-periods, and consoles. AGDQ 2021 day three held an exciting block of 8-bit NES games, a wonderful trio of Mega Man runs, some iconic speedrunning essentials, and the start of the horror games block to boot! Drizzled between were a variety of fantastic runs both brief and lengthy, offering an excess of entertainment for viewers to enjoy. We’ve had a consistently fun time watching the stream and picking out some choices for the best speedruns of AGDQ 2021 day three, so if you missed any of the day’s runs, here are some good places to start!

If you want to watch any of these speedruns, you can find the replays on Games Done Quick’s Twitch channel or their YouTube channel. If you’re reading this during the time of the marathon, we also encourage you to check out the live stream and join the fun. With three days left in the marathon, there are still tons of runs to enjoy. As always, this list is just a small selection of the speedruns that were played at AGDQ 2021 day three. We highly suggest you check out the rest of the day’s runs as well, since we weren’t able to catch every single run. With that said, here are our picks for the best speedruns of AGDQ 2021 day three!

Mortal Shell (Any%) by LilAggy

LilAggy’s run of this indie Souls-like has quite a few mistakes, including some unfortunate deaths that set him back, but we had a great time watching it all the same. After playing through Mortal Shell in 2020, we know just how tough it can be, giving us a renewed respect for the challenging difficulty. This intense run of Mortal Shell carried AGDQ 2021 into day three, giving viewers another dose of suspenseful action following day two’s Darksiders run. LilAggy showcased Mortal Shell well, offering humorous commentary and informative trick explanations throughout the run. Although luck was not on his side during a few boss fights, LilAggy kept his chill and persevered. If we were in his shoes, we probably would’ve thrown the controller across the room and turned off the system.

Journey to the Savage Planet (Any% Post OGM) by dkPuls

Journey to the Savage Planet is a colorful first-person action/exploration game where you play as a lonely astronaut on the titular “savage planet”, scavenging and searching through a dangerous alien world. In order to complete your mission, you have to craft various items, scan important pieces of the environment, and carefully navigate the planet’s treacherous cliffs, swamps, and caves. In this AGDQ 2021 speedrun, runner dkPuls turns this multi-hour journey into a tight less-than-20-minute adventure, utilizing a handful of helpful movement tricks and smart routing. Like the Dishonored 2 run from AGDQ 2021 day two, this run of Journey to the Savage Planet is a delight for any fan of fast first-person movement and sequence-breaks.

Dracula II: Noroi no Fuuin (Any% All Mansion) by Sathdresh

Although the name might be different, this speedrun by Sathdresh should be immediately familiar to any fan of NES games or classic GDQ events. In this comfy 8-bit speedrun, runner Sathdresh guides us through the Japanese version of Castlevania II: Simon’s Quest, a retro platforming/adventure game that’s well-known for its difficulty and obtuse objectives. After shaking off a bit of nerves at the start, Sathdresh and crew offered a casual and lighthearted 40 minutes of entertaining gameplay, fun commentary, and all-around wholesomeness. Although this run could’ve easily fit during any of the “prime-time” schedule slots, we had a great time getting comfy with Dracula II: Noroi no Fuuin in the early morning of AGDQ 2021 day three.

The Cowlitz Gamers’ 2nd Adventure/Lost Adventure (Any% Easy) by Bitty_Kong

Homebrew games aren’t too common at GDQ marathons, so we always love seeing these ultra-indie titles get their time in the spotlight. Runner Bitty_Kong gave us a wonderful showing of The Cowlitz Gamer’s 2nd Adventure, along with some extra levels in the Lost Adventure expansion. This super cute retro platforming game is packed with adorable sprites, interesting level design, and a classic gameplay feel. The excellent run commentary provided plenty of fun facts about this colorful homebrew, including where and how to get it for free. One of our favorite parts of any GDQ event is uncovering these hidden gems, and The Cowlitz Gamers’ 2nd Adventure was definitely worth the watch.

River City Girls is easily one of the best modern beat ’em ups, packed with personality, color, and a satisfying fighting system. This “All Bosses” speedrun by BahamutX_ was an excellent watch during the morning hours of AGDQ 2021, due to both excellent commentary and stunningly precise gameplay. As BahamutX_ fought his way through the vivid streets of River City, we got some insightful commentary from the game developers themselves. Throughout the run we were treated to fun factoids, behind-the-scenes discussions about the game’s development, and much more. In addition to beating the main game with fervor and speed, BahamutX_ also showed off the final secret boss, unlocked by smashing 25 hidden statues throughout the game’s 100+ screens. If you like beat ’em ups and you’ve never seen a run of River City Girls, schedule out some time to catch this one.

There’s a lot of fan debate over which version of Aladdin is the best; the Sega Genesis version or the Super Nintendo version. Although I played both games quite a bit in my childhood, the Sega Genesis version sticks out the most, mostly due to the tough levels, cheerful music, and tight controls. Watching runner ZeeGee breeze through this exceptionally challenging 16-bit Disney classic was awesome to watch. Although they used a handful of tricks, most of this run was pure 2D platforming perfection from ZeeGee. If anything, watch this run for the blisteringly fast carpet level, which is basically the turbo-tunnel from Battletoads but even more intense.

Mega Man (Any%, One Hit KO/Buster Only) by coolkid

While we had a blast watching coolkid speedrun Taz-Mania during AGDQ 2021 day two, this incredibly tough run of Mega Man was even better. If you’re familiar at all with this classic Capcom NES game, you’ll know that Mega Man is brutally punishing in almost every way. Defying the odds, coolkid played through the entire game with only one bar of health, only using the default Mega Buster weapon. Although the run wasn’t perfect, with an unfortunate death early on, this performance by coolkid is one of the most impressive retro runs of AGDQ 2021 so far. Clear and informative commentary was provided throughout the run by Blechy, one of the best GDQ commentators you could ask for. If you want some classic NES speedrunning, this One Hit KO/Buster Only run of Mega Man should satisfy.

The Tony Hawk’s Pro Skater 1 + 2 remake was one of our highest-rated games of 2020 and for good reason. This fantastic modern compilation overhauls the first two Tony Hawk’s Pro Skater games, adding flashy graphics, new tricks and skaters, and tons of bonus content. Runner PARTY MAN X showed off their complete mastery of this skateboarding remake by completing the game’s dozen-plus levels in just 16 minutes. Through a blur of flip-tricks, wall-plants, and speedy grinds, PARTY MAN completed every level objective and nabbed gold medals on all of the trick competitions in the blink of an eye. This speedrun is so fast that you might need to watch it twice to see everything.

Cuphead (All Bosses, No Major Glitches) by Jason2890

When Cuphead came out in 2017, it simultaneously wowed players with its beautiful hand-drawn animation and infuriated players with exceptionally challenging gameplay. Part boss rush and part Mega Man-style platformer, Cuphead has become one of the most popular and punishing action games in modern gaming history. Runner Jason2890 performed an “All Bosses, No Major Glitches” category speedrun of Cuphead, playing the game mostly as the developers intended. Despite not using any game-breaking tricks, Jason2890 still destroyed boss after boss, using various risky quick-kill techniques. Simply put, this Cuphead speedrun is a perfect example of the high level of skill needed to master the game’s many bosses.

This speedrun of BPM: Bullets Per Minute got us in the mood for the subsequent horror block, as this first-person rhythm-based shooter is packed with cool creature designs, heavy metal tunes, and fast-paced gameplay. In this groovy run from AGDQ 2021 day three, runner Bullets blasted through the eight levels of BPM using the character Njord, a magic-wielding character with infinite ammo but low damage output. By keeping their shots in time with the beat and collecting various power-ups, Bullets was able to smack the many baddies and bosses on Hard difficulty, with only a few minor mistakes to speak of. If unique FPS games are up your alley, you should definitely check out BPM: Bullets Per Minute and this fantastic speedrun by Bullets.

Horror game speedruns are usually some of our favorite runs of any GDQ event, and that continues to be true at AGDQ 2021. This year had one of the lengthiest blocks of horror games ever, including this hilarious and entertaining run of the spooky FPS F.E.A.R by MaxyLobes. This FPS is rich with bullet-time glitches, out-of-bounds tricks, and some other baffling techniques, many of which were expertly explained by Maxy and his couch of commentators. The run had plenty of memorable moments, including some mind-blowing physics tricks and goofy jokes from the runner and commentators. If you don’t mind a bit of blood with your speedruns, this F.E.A.R run is a comfy and comedic watch.

Those are our picks for the best speedruns of AGDQ 2021 day three! By the end of the day, the marathon has raised over $450,000 for the Prevent Cancer Foundation, and will surely surpass the million dollar mark soon! If you’re able to, we highly suggest heading over to the Games Done Quick website and donating to PCF.

If you’re watching AGDQ 2021 live, be sure to stop by our Twitter page (@official90skid), where we’re geeking out over the marathon all week long! If you missed it, you can also check out our picks for the best speedruns of AGDQ 2021 day one and day two in our previous recap articles. Enjoy the rest of the marathon!