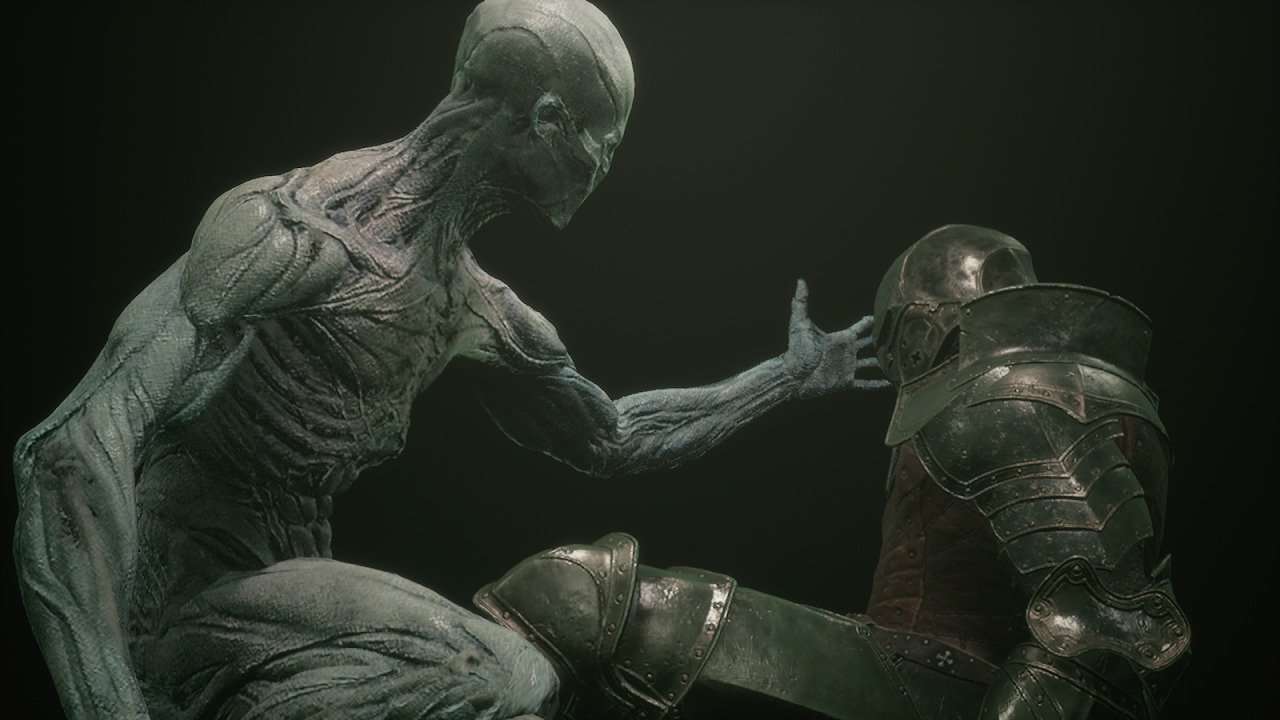 Mortal Shell is a third-person action game developed by Cold Symmetry that looks to recreate the challenge and atmosphere of the Dark Souls franchise while offering its own unique twists. Playing as a faceless husk with the ability to possess fallen soldiers known as “shells”, you’ll fight against brutal and deadly foes as you traverse a grimy, oppressive world. There’s challenging combat, a significant lack of objective markers, and you can expect to die more often than not. By their very nature, Souls-like games can be frustrating, but does Mortal Shell provide the satisfaction that makes them worthwhile?

A Vessel of Death

Like Dark Souls, Mortal Shell does most of its storytelling through the environment, along with a few traditional non-playable characters scattered around the world. You start the game as a pale, seemingly soulless husk, navigating a foggy limbo between life and death. After a brief tutorial, you crawl through a shifting tunnel and emerge in Fallgrim, a dank and dirty swampland. Quickly thereafter you discover the corpse of a soldier and possess it, providing you a bit more protection. Urged on by visions, you approach a lonely decrepit tower, occupied by a few otherworldly characters. A shrouded woman named Sester Genessa and a masked giant known as The Old Prisoner offer you little information, but send you forth on an adventure to find and recover three Sacred Glands, located deep within Fallgrim’s crumbling temples.

During your journey, you can uncover various pieces of lore by investigating certain monuments, reading discarded books, and talking to certain characters. However, most of this information is pretty vague, simply adding a bit more intrigue to the environment. In combination with the moody lighting and evocative world design, this results in an interesting experience. That said, unless you’re especially interested, you might still be confused as the end-credits roll. Like other Souls-like games, Mortal Shell has a dark and morbid narrative set against a world of peril and violence, but it’s not as effective as a game like Bloodborne. Honestly, I enjoyed the storytelling for what it was, but was a bit underwhelmed by the end of the game. If you’re going into Mortal Shell expecting a sprawling narrative, you’ll just be disappointed. It’s not a bad story by any means, it’s just rarely the focus of the experience.

The “shell” in Mortal Shell refers to the game’s unique possession mechanic, which offers swappable character classes. During your adventure in the swamp, you’ll discover a handful of bodies (or shells) that you can inhabit. Each shell offers a slightly different playstyle and set of strengths and weaknesses, so it’s always fun to find a new one and experiment. Mortal Shell is less about leveling up or improving character stats and more about figuring out what kind of strategy and shell works the best for a fight.

Besides shells, you can also find a handful of unique weapons to wield, including the expected swords, axes, and hammers. You can upgrade both your shells and weapons by collecting and spending resources, strengthening their power and unlocking new abilities. Shells can be powered up using “tar” and “glimpses”, two currencies that are earned by defeating enemies. Weapons can be upgraded by discovering certain rare items, usually awarded for defeating bosses or being an extra-curious explorer.

Combat itself feels slow and purposeful, as you have a limited amount of stamina afforded for attacks and dodges. Some shells offer more stamina than health (and vice versa), but it’s always best to pick your attacks. Each weapon has both quick and heavy attacks, which can be chained together for high-damage combos. Instead of blocking, your character can harden themselves into stone, momentarily negating most damage. The harden ability has a short cool-down period between uses, but its the main reason that Mortal Shell feels less difficult than the games it is inspired by. Even if you’re mid-attack, completely out of stamina, and about to get smashed by a giant boss attack, hardening usually works. You also have a parry ability, but using it causes precious special-meter known as “resolve”, which can otherwise be used for powered-up attacks. Defense is often the best offense, because healing is limited and per usual for the genre, you’ll lose a big chunk of your resources once you die. Fortunately, you can always return to your point-of-death and retrieve your lost goodies.

Mortal Shell, like other Souls-like games, doesn’t give you a direct place to go most of the time. Once you’ve discovered the Fallgrim Tower where Sester Genessa and The Older Prisoner hang out, you’re set loose with barely any destination. Fallgrim is full of foggy, twisting paths that can feel overwhelming at first. In your first few hours with the game, it’s common to get turned around or flat out lost. However, as you start to gain your bearings and recognize landmarks, you’ll notice that Fallgrim isn’t even as half as big as you might’ve thought. That sentiment rings the same for the Fallgrim Outskirts, an exterior area that contains the three temples you must raid.

While this might sound like a knock at first, the smaller size of Mortal Shell‘s map actually works to its advantage. There are tons of shortcuts to discover, which once memorized, let you hop around the map with ease. While the swamp aesthetic can occasionally grow repetitive, I felt more compelled to search through every nook and cranny of Fallgrim, knowing that most dead-ends would be worth exploring. Having a smaller map also means that respawn points are closer together, so unless you run off exceptionally far into the Fallgrim Outskirts, you won’t be too far away from your corpse if you happen to fall during combat.

When you do decide to take the plunge into a temple, it’ll be your decision on what order to tackle them in. There are three temples in total, themed after different elements like ice and fire. For the most part, temples act more like combat challenges than anything else, pitting you against dozens of foes as you delve deeper into the dangerous halls. One of the dungeons features an exceptionally open-ended yet maze-like design, which is arguably more frustrating than fun. Each temple contains one or two big bosses to take down, although I rarely struggled to beat them.

Whether it was due to my fully-upgraded weapon or my previous experience with more difficult Souls-like titles, Mortal Shell stopped feeling challenging partway through. That said, since I never got stuck or super frustrated with any of the temples, the majority of the experience was satisfying and enjoyable. Your enjoyment may vary in this regard, but I have a soft spot for elemental-themed dungeons (thanks, Legend of Zelda: Ocarina of Time), so I had a pretty good time.

The Bottom Line on Mortal Shell

If you’re ever played a Souls-like game, you should be pretty comfortable playing Mortal Shell. For the uninitiated, you can expect extremely challenging enemies, open-ended exploration with limited direction, and a tough but fair combat system. In many ways, Mortal Shell feels like Dark Souls with training wheels, but it ends up working out well.

In fact, if you’re one of those gamers who have never tried a Souls-like game simply due to the fabled difficulty, Mortal Shell is a decent introduction to the concepts of the sub-genre. While it can be plenty punishing in both combat and progression, Mortal Shell is much more approachable and easy-to-parse. If you’re curious about Mortal Shell, I recommend you give it a shot. Even when compared to larger, more expansive Souls-like games, Mortal Shell is able to stand up on its own.