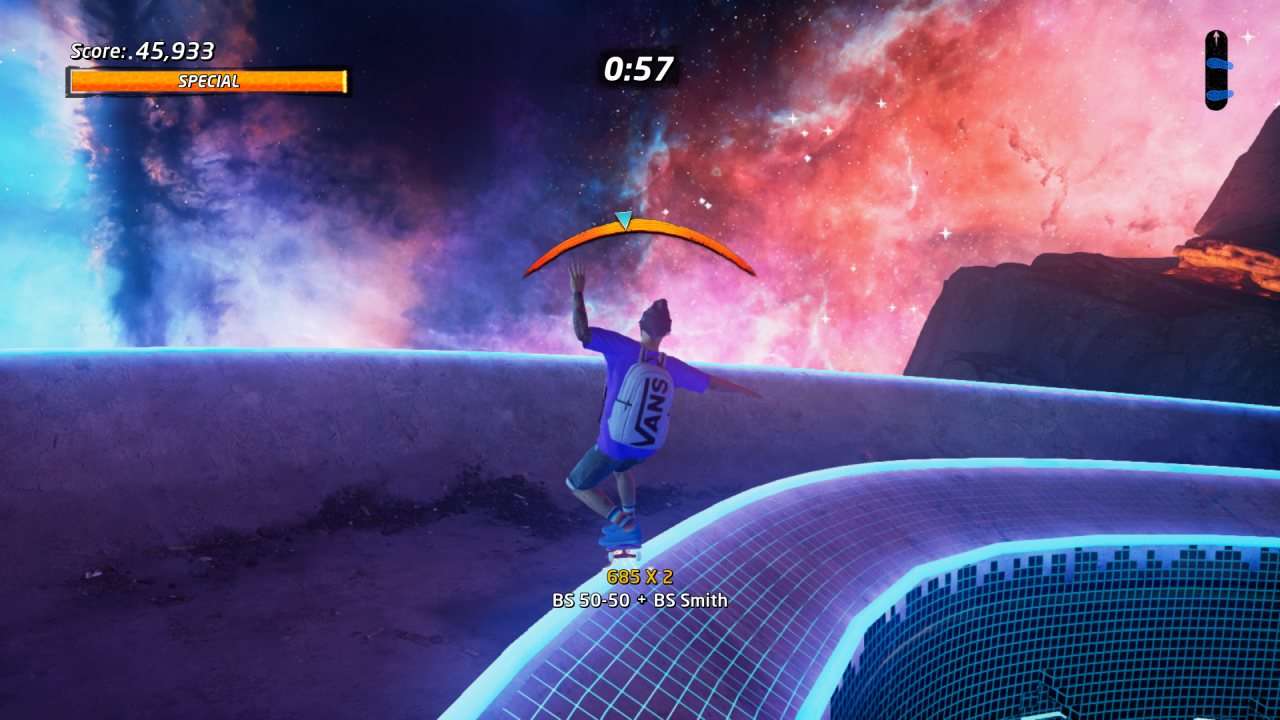 Go for Gold and Goals

As soon as you open the main menu of Tony Hawk’s Pro Skater 1 + 2, you’ll quickly realize that there’s an abundance of content. However, if there’s anything we’ve learned about the Tony Hawk’s Pro Skater series, it’s that the gameplay is what really counts. Thankfully, THPS 1 + 2 feels fantastic to play, offering players a fast and creative skating experience that rivals the best entries in the franchise. Disregarding the impressive graphical overhaul and extra modes and features, THPS 1 + 2 sticks close to the source material. The game contains every level from the first two Tony Hawk’s Pro Skater games, such as the iconic Warehouse, the ever-enjoyable School II, and the sci-fi skate-park in Roswell. There are dozens of pro skaters to play as, including the original roster along with some modern additions. You can also create your own skater, using facial presets and cosmetic goodies.

Just like in the original games, you are allotted two minutes to skate around your level of choice, attempting to complete various objectives. Each level has around 10 objectives to take on, including high score targets, trick combos, and a variety of collectible-based challenges. You can also collect skill points, which can be spent to enhance your skater’s balance, speed, and trick capabilities. Levels and their objectives have been slightly altered, often for the better, featuring new interactive elements and secrets. A handful of levels play out as competitions, wherein you must show off your best tricks over the course of three runs. As always, a few objectives and levels can be frustrating, but thanks to some gameplay changes, things feel easier than ever.

Apart from the graphics, the most notable change to the gameplay of THPS 1 + 2 are the extra mechanics like reverting, wall-riding, and more. These features, which were added over the course of the Tony Hawk’s Pro Skater franchise history, have been included in the remake to help you extend your combos and better navigate the environments. As always, you can perform flip-tricks, grabs, and grinds to rack up big points. Tricks are simple to pull off, only requiring you to tilt your analog stick and tap a button. You can also manual your board between tricks to extend the combo, further pushing up your score multiplier. There are many more advanced mechanics to learn, but thanks to an extensive tutorial, the gameplay is welcoming to players of all skill levels.

While I’m not sure whether it was from gameplay tweaks or simply my many hours of experience with the series, THPS 1 + 2 feels a bit more lenient and forgiving than its predecessors. Falling off your board and crashing feels less abrupt than before, as your skater quickly “glitches” back onto the board, maintaining some momentum. Late or sloppy tricks that would’ve sent my skater toppling before now land with firm placement, further empowering combos. For both THPS veterans and newcomers, THPS 1 + 2 arguably provides the most welcoming and satisfying gameplay mechanics in the entire series. While you can’t get off your board and walk around like in some later THPS games, the available mechanics make it exceptionally entertaining to explore every level.

A Mountain of Challenges

A bulk of the content in Tony Hawk’s Pro Skater 1 + 2 comes in the form of over 700 challenges, split across five different categories: Skater, Combo, Multiplayer, Skate Park, and Create-a-Park challenges. You’ll likely complete some of these challenges without trying, especially if you’re trying to complete every goal in the main levels. That said, even after my 100% run of the original two games, I still had over 600 challenges remaining. Challenges range from simple to near-impossible, putting even the most seasoned player’s skills to the test. Some challenges task you with finding gaps in levels, reaching a set score, or pulling off combos with specific tricks. Each professional skater also has their own set of challenges, encouraging you to try out every available athlete.

As you complete challenges, you’ll earn both experience and cash to spend in the skate shop. Many challenges also unlock cosmetic items or icons for your online profile. There are tons of different items to buy, including various decks, wheels, apparel, tattoos, and items to use in create-a-park. Certain items in the skate shop are locked until you hit a certain player level, so you’ll want to gain that experience whenever possible. Don’t worry though, as experience and cash are also earned through both single-player and multiplayer skate sessions.

Overall, the challenge system kept me engaged with THPS 1 + 2 for hours upon end. Whenever I felt like I needed something to work towards, there was always a long list of challenges left to undertake I still have plenty of challenges left to complete, endlessly beckoning me to hop back on my board and attempt a few runs.

THPS 1 + 2 includes both local split-screen and online multiplayer, so if you’re looking to skate with friends, there are some decent options. Although split-screen multiplayer is limited to two skaters, all of the expected modes are included. You can compete on any of the unlocked maps from the original games, as well as custom create-a-park maps. There’s a good mix of game modes, including trick-based modes like Trick Attack and Combo Challenge, as well as more lighthearted modes like Tag and Horse. I particularly enjoyed the classic Graffiti mode, where players “paint” various elements of the level by performing tricks on them. Other players can paint over your space by scoring higher, creating an exciting competition of navigation and successful tricking.

When it comes to testing your skill against other players online, there are only a couple matchmaking playlists available. If you’re up for casual competition and less serious modes like Graffiti, you can queue up in the “Jams” playlist. Those looking to assert their dominance in score and combo-based modes can hop into the more serious “Competitive” playlist.

In both playlists, you’ll compete in a handful of modes with a brief cool-down period between rounds. The map rotates after a few rounds, so you’ll never be skating in the same area too often. Unfortunately, with the exception of private lobbies, there’s no way to vote on a desired map or mode.

Your Park, Your Way

For the more creative players who love to tinker and experiment, Create-a-Park is a great mode to sink some hours into. Much like previous iterations of Create-a-Park, this mode in THPS 1 + 2 lets you craft your own skate park from scratch and share it online. Creating a park is as easy as dragging and dropping your desired ramp, rail, or platform, easily modifying it with a large variety of editing tools. There’s a decent selection of objects to use at the start, but you can unlock bigger and better elements through the skate shop. Although I prefer trying other player’s creations more than creating my own, the Create-a-Park mode was intuitive enough that I found myself making a couple of parks anyway.

To that point, I did have a great time trying out other player’s published levels. The creativity on display is impressive, ranging from imaginative original parks to recreations of levels from other Tony Hawk’s Pro Skater games. There are even a few “auto-scroller” levels, like a rollercoaster that simply tasks you with holding down the grind button and enjoying the ride. Custom levels can also be “remixed” (if the original publisher allows it), so if you have a favorite park but want to adjust it, that’s definitely an option. You can also complete certain challenges and achievements while playing in custom parks, so any time spent trying out levels will help you progress. Simply put, the Create-a-Park mode in THPS 1 + 2 ensures that there will be no shortage of places to skate even months after the game’s release.

Songs to Skate To

The soundtrack has always been a highlight of any Tony Hawk’s Pro Skater game, especially the earlier entries. Although there are a few missing tracks here and there, almost every original song from the first two games is included in this remake. In addition to classic tunes like Superman by Goldfinger and Guerilla Radio by Rage Against the Machine, THPS 1 + 2 contains plenty of new tracks as well. There’s a good smattering of genres, including the expected punk and metal songs, along with some newer hip-hop, grime rap, and more.

Music selection is quick, easy, and customizable, so if you don’t like certain tracks you can omit them from rotation. At any time during the game, you can click in on the right thumbstick to skip the current track, starting up the next song in the never-ending shuffle. You can create a custom playlist as well, selecting your favorite tracks and skipping over the rest. Overall, the music in Tony Hawk’s Pro Skater 1 + 2 is fantastic, bringing back rushes of nostalgia, an ample amount of hype, and some surprisingly chill beats as well. Picking the right tune can often set the stage for a killer performance and thankfully THPS 1 + 2 has no shortage of excellent picks.

Tony Hawk’s Pro Skater 1 + 2 is an extremely entertaining skateboarding game, which is a near-miracle in the year 2020. As a remake of the first two games, THPS 1 + 2 is a standout among peers, offering hours upon hours of highly replayable content. Between the classic single-player campaign, online and split-screen multiplayer, extensive progression system, and intuitive Create-a-Park mode, THPS 1 + 2 is anything but slim on stuff to do. No shortcuts have been taken in the visual and audio departments, as THPS 1 + 2 looks and sounds better than ever.

If you’re a veteran of the Tony Hawk’s Pro Skater series, you should absolutely pick up this game. At a mid-tier price point, THPS 1 + 2 offers a higher level of quality and a bigger amount of content than most AAA, full-priced games. Players who have never tried out a Tony Hawk’s Pro Skater title will also find this to be a great entry point, as the more forgiving difficulty and great set of tutorials makes it simple to jump in and start skating. There are a few flaws, namely the underwhelming number of online playlists and a slightly cluttered menu, but these problems are easily forgiven. As long as you like the idea of moving fast and pulling off crazy tricks, Tony Hawk’s Pro Skater 1 + 2 is one of 2020’s best games and one of the best remakes ever made.