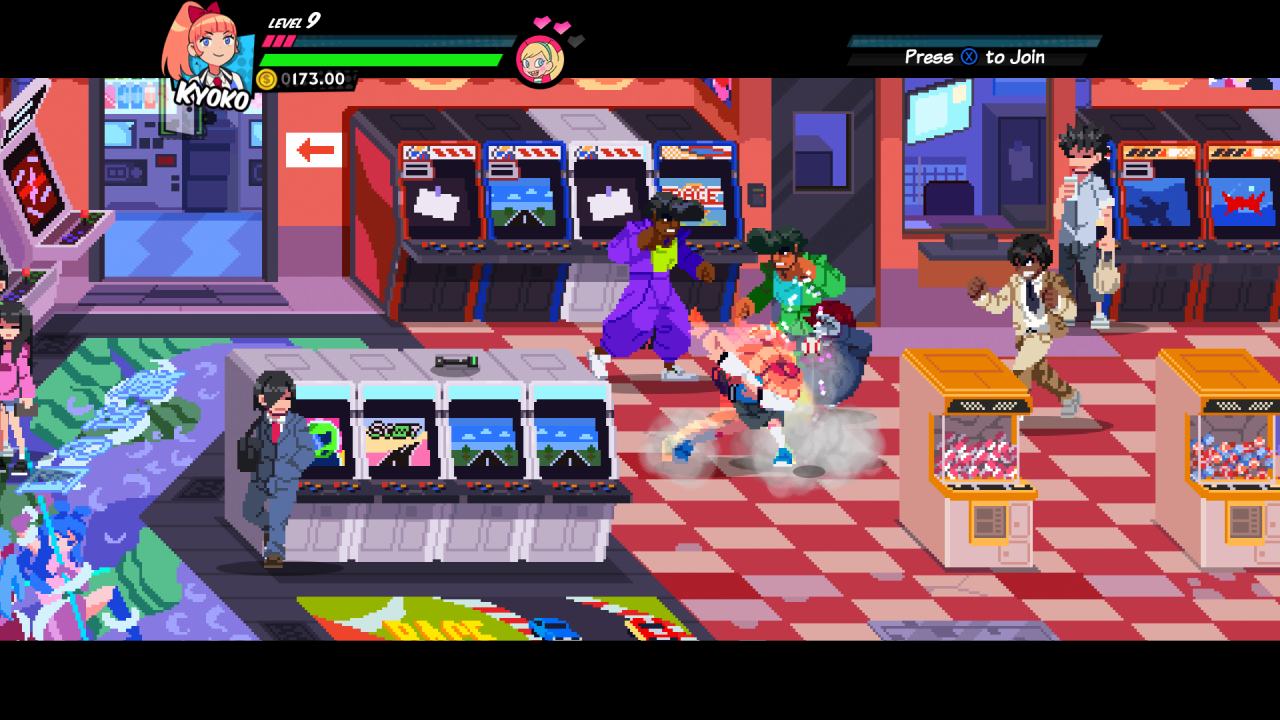 River City Girls is an anime-inspired beat ’em up, with retro pixel art and tons of attitude. Part of the River City franchise, this title has a long legacy to live up to. Developed by WayForward with help from legendary fighting game makers Arc System Works, there’s plenty of substance to match the excitable style. Playing either solo or cooperatively with another player, you’ll control the spunky high school students Kyoko and Misako. When their boyfriends are kidnapped, the pair must bust out of detention and smash the skulls of anyone who stands in their way. Does this retro revival bring hours of entertaining couch co-op, or is this just a lazy beat ’em up with anime trimmings?

Like most other beat ’em ups, the story in River City Girls is pretty straightforward. The boyfriends have been kidnapped, so now you gotta beat up everyone until you find them. Kyoko and Misako’s journey takes them across town, cutting through the slums, journeying through the streets of downtown, and even taking a stop at the mall. There are a handful of cutscenes as well, such as fully animated boss intros and flashbacks told through manga panels. In the case of River City Girls, it’s very much “not about the destination, but the journey there”. The characters and scenarios you encounter along the way make up the bulk of the story; the missing boyfriends are simply the ever-dangling carrot on the string.

I found River City Girls‘ plot to be servicable enough, with a handful of chuckles along the way. A lot of the voice-work is very eccentric and over-the-top, which works to varying degrees of success. Characters can be abrasive and annoying to a fault, but dialogue scenes can be skipped if you want to jump directly into the action. The only glaring issue I had with the narrative was the humorous attempt at a “twist” ending that I found awkward and underwhelming. Luckily, there are some really visually astounding bosses and quirky characters to detract from the middling story.

The Power of Love

Gameplay in River City Girls is standard beat ’em up fare with the distinct RPG mechanics of the River City franchise. After picking between either Kyoko or Misako, you’ll embark on your journey of fisticuffs. You can dispatch enemies with a few different attacks, and some areas require you to defeat all enemies before progressing. Weapons can be picked up off the ground and used offensively, providing you with some extra power. You can also experience the game in local co-op, which presents some advantages over solo play. Both characters have unique attacks and abilities, providing a bit of variety and replayability. From here, you’ll start an adventure where you beat the snot out if anyone in your way. Don’t be fooled by the cutesy anime visuals though, this can be a very challenging adventure at times.

Instead of playing out in a linear fashion, you’ll pick up a handful of quests that point you to various locations on the in-game map. The world is easy to navigate, as it’s simply a series of interconnected screens. Objectives are clearly marked on the map with exclamation points, while helpful places like shops and fast travel points are also easily visible. As you progress through quests and defeat enemies and bosses, you’ll earn experience points and cash. Collect enough experience and you’ll increase your character level, improving your strength, health, and agility. It’s a very easy system that doesn’t require much thought, but adds a nice bit of complexity to the gameplay.

Shop Until You Drop (Bad Guys)

After you knockout a few dozen or so enemies, you’ll find your pockets bursting with coins and dollar bills. Luckily, there are plenty of places in the city that will gladly take your cash. Shops usually have a limited selection of items, varying between health consumables, accessories with stat boosts, and weapon-enhancing books. If you’re playing in co-op with a friend, you can usually spare the health consumables, as your partner can revive you with a few quick kicks to your corpse. Unfortunately, solo players will have to spend quite a bit of cash on consumables, as you’ll be relying on them to stay alive when the fighting gets tough.

The other main place you’ll spend all your cash is at the Dojo, where Kyoko and Misako can learn new and powerful attacks. New attacks are unlocked after leveling up a few times, so you’ll want to return to the Dojo often to learn everything. These additional moves open up combat in some interesting ways, allowing you to create juggle combos and pull off spectacular special moves. I had a particularly good time with the move I like to call the “rainbow dab”, as well as Kyoko’s several abilities inspired by Chun-Li from the Street Fighter franchise. I had a great time learning the ins and outs of each character’s moves and abilities, which was a nice change of pace from the monotonous tapping of the attack button you see in other beat ’em up titles.

River City Girls earns a lot of points in the visuals department, with pixel art that is both colorful and well-designed. The characters and enemies pop out of the backdrop thanks to vibrant sprite work and flashy effects. River City is a pretty varied place, with environments ranging from bustling mall streets to dirty warehouses and back alleys. The animation is also top notch, providing a fluid and fast motion to the action. Generally speaking, River City Girls is a visual treat, with plenty of nostalgia-inducing sprites and aesthetically pleasing environmental art. There’s a palpable sense of joy and a care-free spirit to River City Girls, which pleasantly offsets the excessive amount of face-punching you’ll do.

The beat ’em up genre is home to some of gaming’s greatest soundtracks, often pumping up the player with heavy beats and roaring riffs. River City Girls has an interesting mixture of tracks that play during fights, blending the expected chip-tune beats with some other less effective choices. Don’t get me wrong; most of the music in River City Girls is really good and worth listening to. I especially enjoyed the catchy and punk-rock theme song, which sets the tone nicely. However, there are a few songs that simply don’t fit for fight music. It’s hard to get pumped for challenging waves of enemies when the music sounds like something pulled from an emotional moment in Kingdom Hearts. Soft female vocals, ethereal sounds, and songs with slower beats-per-minute are all things I enjoy. That said, I don’t feel especially “in the groove” when those kinds of songs play while I’m trying to kick some ass.

River City Girls takes the existing River City franchise and injects it with a much needed dose of style, personality, and charm. The two lead characters Kyoko and Misako are endearing and memorable, and their journey to rescue their boyfriends is enjoyable if a bit disappointing in the end. Enemies can tend to fight a bit dirty at times, but otherwise the combat is thoroughly enjoyable and has a surprising amount of nuance. The visual style will keep you interested and engaged, even with some of the weirder music choices clash with the tone of the game.

As an added bonus, there’s a decent amount of post-game content, including unlockable characters, hidden collectibles, and secret bosses. Depending on your choice of difficulty, your initial run of the game will take anywhere from 4 – 6 hours. I won’t spoil any of the fun here, but know that River City Girls is an excellent game for multiple playthroughs. Despite the handful of flaws, River City Girls is a great addition to the River City franchise. Its eccentric anime influence and bubblegum-pop color palette might not be for everyone, but I found Kyoko and Misako’s adventure to be well worth the time.