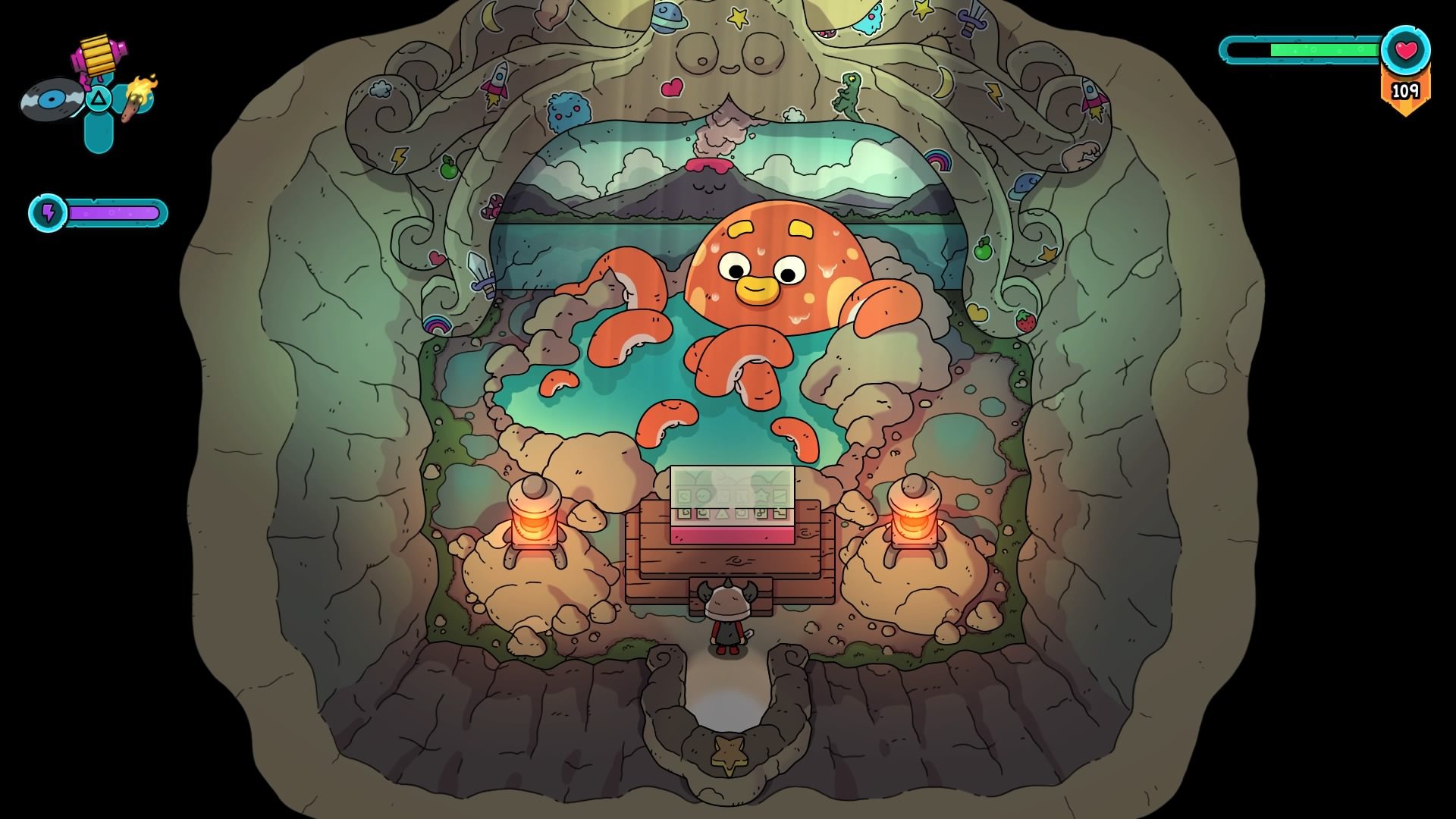 The Swords of Ditto Review – The Legend of Homage

The Swords of Ditto takes rogue-like aspects from games like Rogue Legacy and fuses them with a classic homage to The Legend of Zelda: A Link to the Past.  Developed by OneBitBeyond, it’s a quirky and cute indie title with a lot of heart and charm.  From themed dungeons to unique items, The Swords of Ditto replicates many aspects of the much beloved Zelda title.  When introducing its own ideas, the game both succeeds and fails in a variety of ways.  However, does it come out on top as a worthy spiritual successor, or a fail to strike more than a single nostalgic chord? 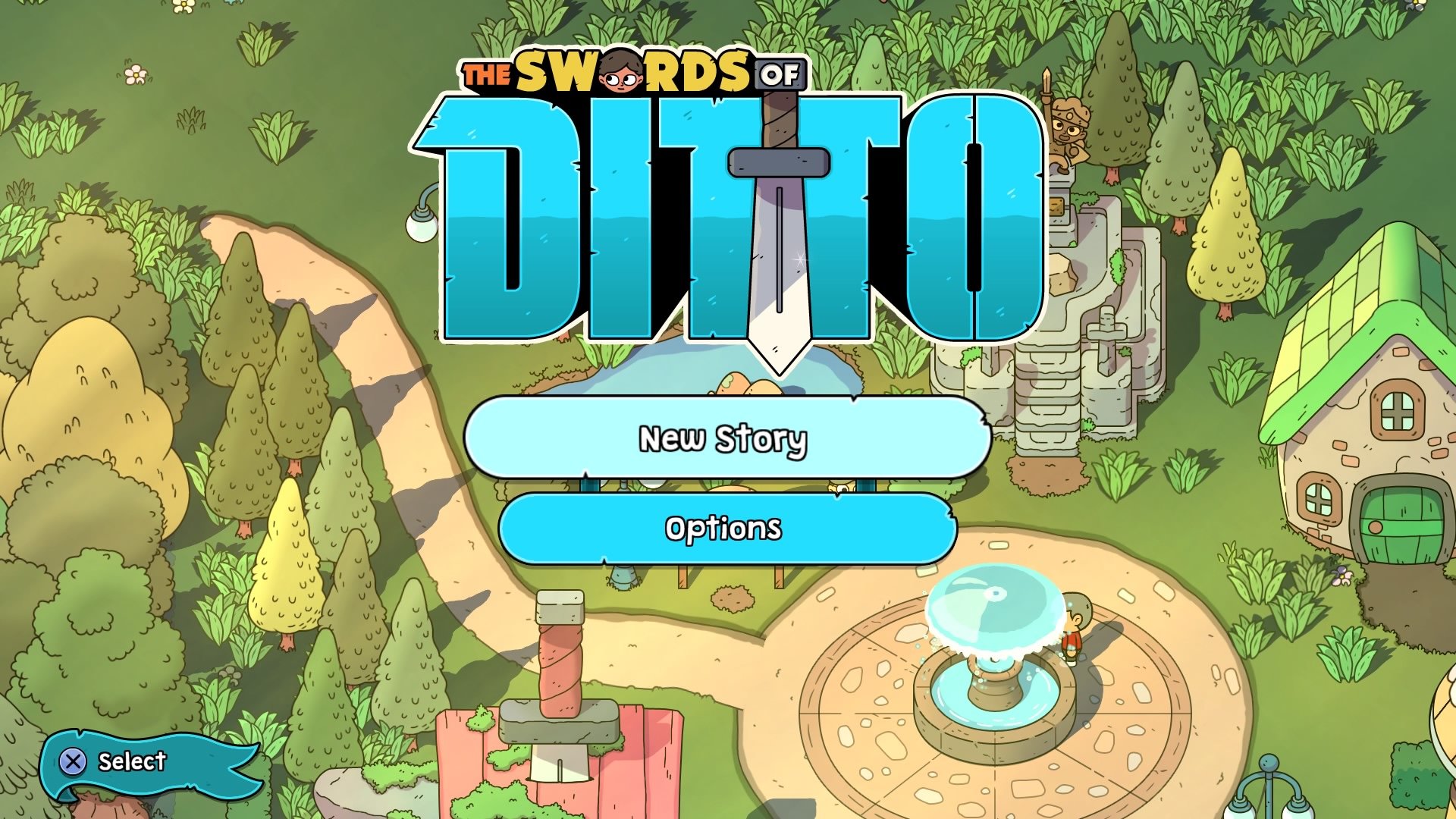 Swords of Ditto takes place in the appropriately named the “Land of Ditto”.  It’s a tropical island with lush scenery and bright visuals, but the land is under a curse that rears its head ever century.  That curse takes the form of Mormo, a villainous spell caster whose only goal is to rule over the fantasy land.  After awakening on a beach, you are given a rundown of the situation by Puku, a fairy-like insect that guides you through the game.  In the middle of town is a statue with a sword in it, and pulling the sword from the stone causes your character to transform into the legendary “Sword of Ditto”.  Wielding the sword lets you slash, roll, and potentially even take on aforementioned sorcerer.  With that setup, it’s up to you to explore the environment while the clock ticks closer to Mormo’s arrival. 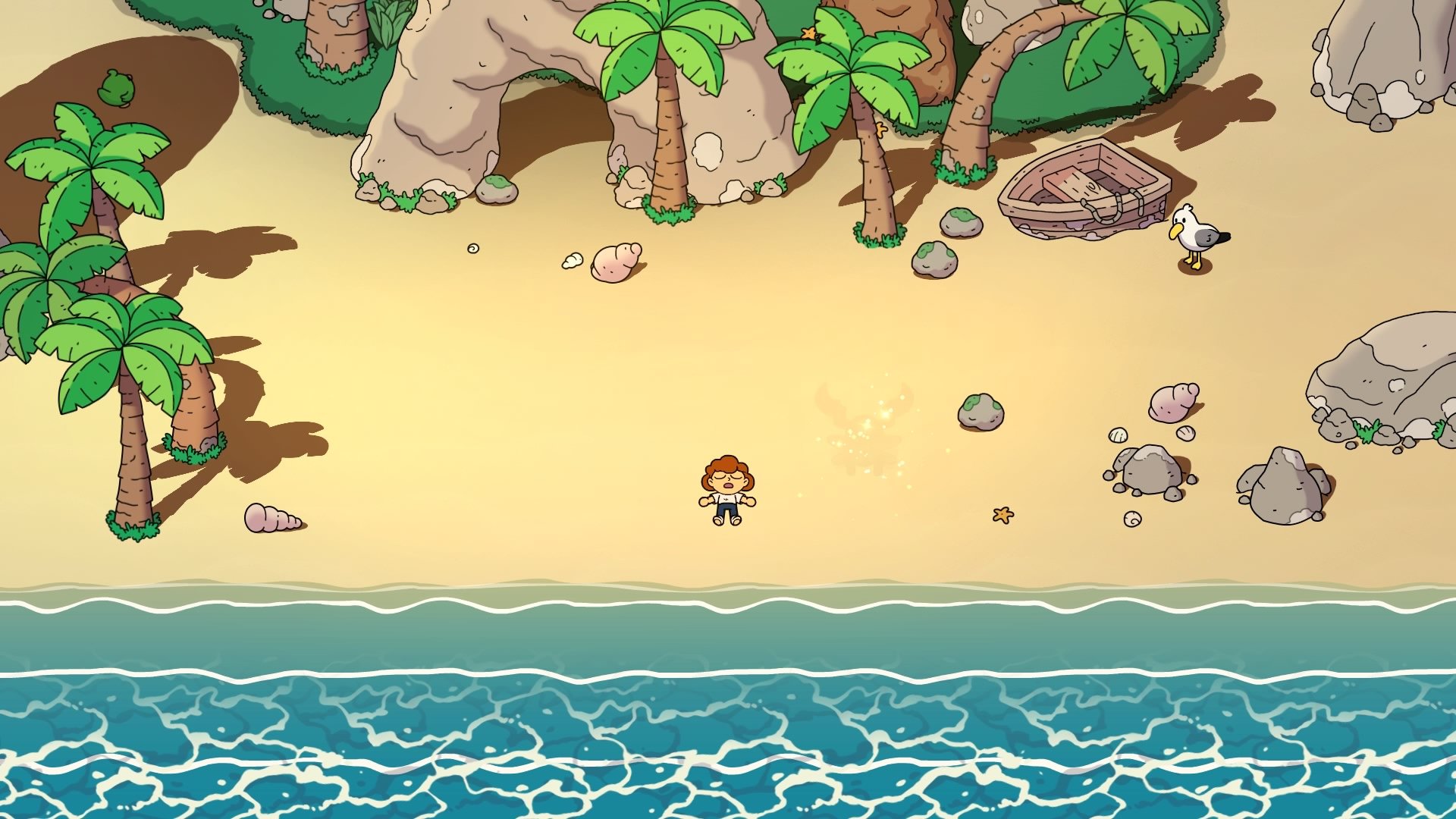 Along your journey you’ll meet a variety of fun characters.  Many of them have truly inspired character designs, and I found myself enjoying the look and feel of nearly every NPC.  In addition to the townspeople who go about their everyday lives, there are plenty of fun and interesting characters who run shops, give you upgrades, and more.  Some standout characters include the robotic clerk that runs the toy store that sells new weapons and items, a giant penguin who increases your bomb capacity, and a big fat cat who sells a variety of wares.

Despite the interesting set up, the story in Swords of Ditto never really goes anywhere past the initial intrigue.  It’s an interesting concept, but the narrative falters and loses weight quickly.  I had fun exploring the world, but most of the characters you meet spout off canned lines that feel weak and cheaply written.  The same can be said for the side quests, which rarely have any story value.  Generally speaking, Swords of Ditto is an experience that values gameplay over story. 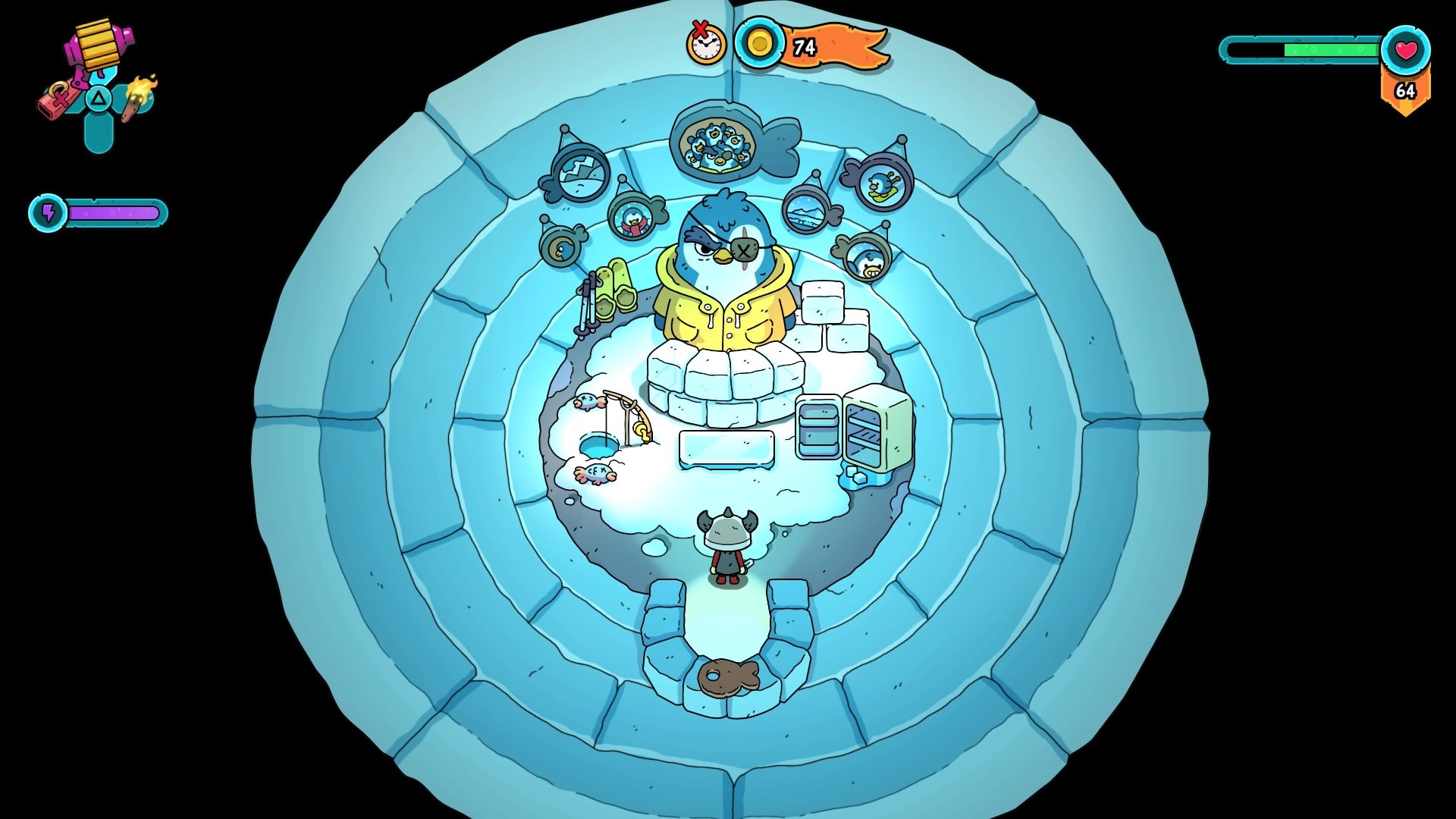 Playing Swords of Ditto feels both new and familiar, thanks to some fun ideas that have been added to the already existing solid Zelda-like gameplay.  The map is laid out in a similar Zelda style, and you’ll move from sector to sector defeating enemies and finding dungeons.  In addition, there are randomly generated caves and side quests to complete, giving you currency and occasionally upgrades.

Like The Legend of Zelda: A Link to the Past, Swords of Ditto doesn’t hold your hand much.  Although the introductory tutorial gives you a decent idea of how to play, many of the side features are left unexplained.  By the time I had bested Mormo and beaten the game, I still didn’t know how some of the mechanics worked.

Dawn of the Final Day

Your overall objective is always the same.  There are two main types of dungeons; toy dungeons and trial dungeons.  Completing toy dungeons gives you a new item that can be used in both combat and puzzle-solving, whereas trial dungeons make the end fight with Mormo a bit easier.  You have four days to complete these tasks, although you can eventually reverse time via goddess statues scattered throughout the world.  Despite this, Swords of Ditto definitely has a sense of urgency to it, especially once you reach the final day.  In order to enter the dungeons, you’ll have to level up your character by defeating enemies and completing side quests. 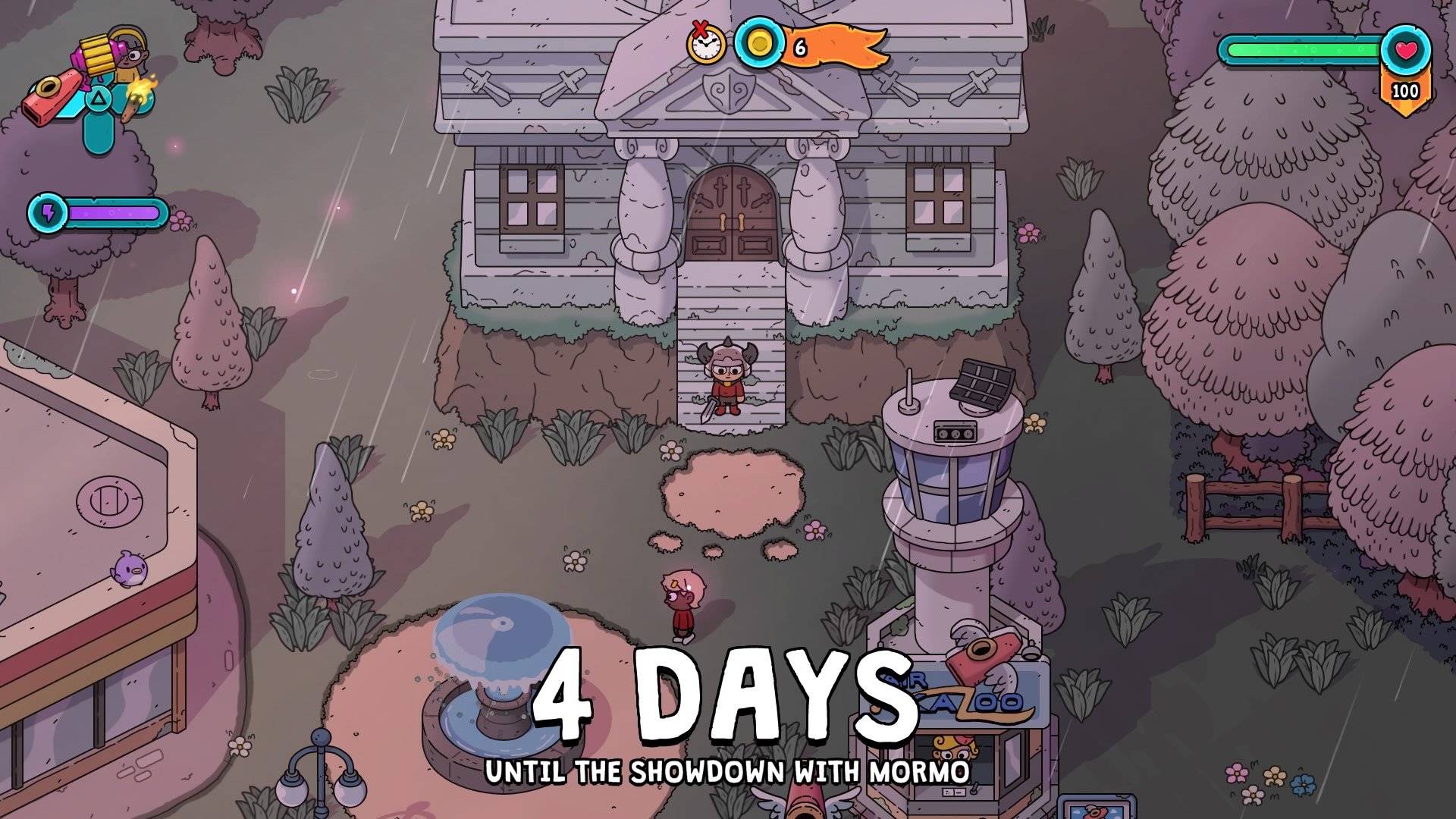 While the game gives you three different levels of difficulty, I found even the normal difficulty to be quite punishing.  As you start to level up into the double digits, some enemy encounters can seem too tough to tackle.  There’s a definite risk/reward element to the game, as dying is absolutely permanent.  Eventually, you can pass some of your items and consumables to the next wielder of the sword, but I didn’t unlock that feature until three or four runs in.  Generally speaking, Swords of Ditto can get incredibly frustrating.  From the way the game is laid out to the occasionally clunky combat, there’s a level of polish that is seemingly missing.

Besides passing items from run to run, Swords of Ditto does a few other things to keep each new run interesting.  Every time you start a new run, the map will have a different layout.  The location of dungeons moves around, and caves and other locations are altered.  I found this to be both a positive and a negative.  On one hand, dungeons can be refreshing since the puzzles usually focus on the last toy that you acquired.  Conversely, those puzzles take place in similar looking dungeons.  Almost every toy dungeon that I encountered was centered around the ability to swap between a red and blue dimension.  While this mechanic was interesting at first, I couldn’t help but feel it was overplayed.  A few hours in, I found the dimension swapping to be tedious.  I like that the puzzles force you to try out new items, but most of the dungeons play out in the exact same way.  Additionally, the variety of bosses leave something to be desired.  While there are some cool bosses, most of them are just “fallen swords”.  These bosses are essentially mirror images of you, similar to Shadow Link in The Legend of Zelda: Ocarina of Time.  It’s a cool ideas at first, but seeing the same boss over and over cheapens the experience after a while. 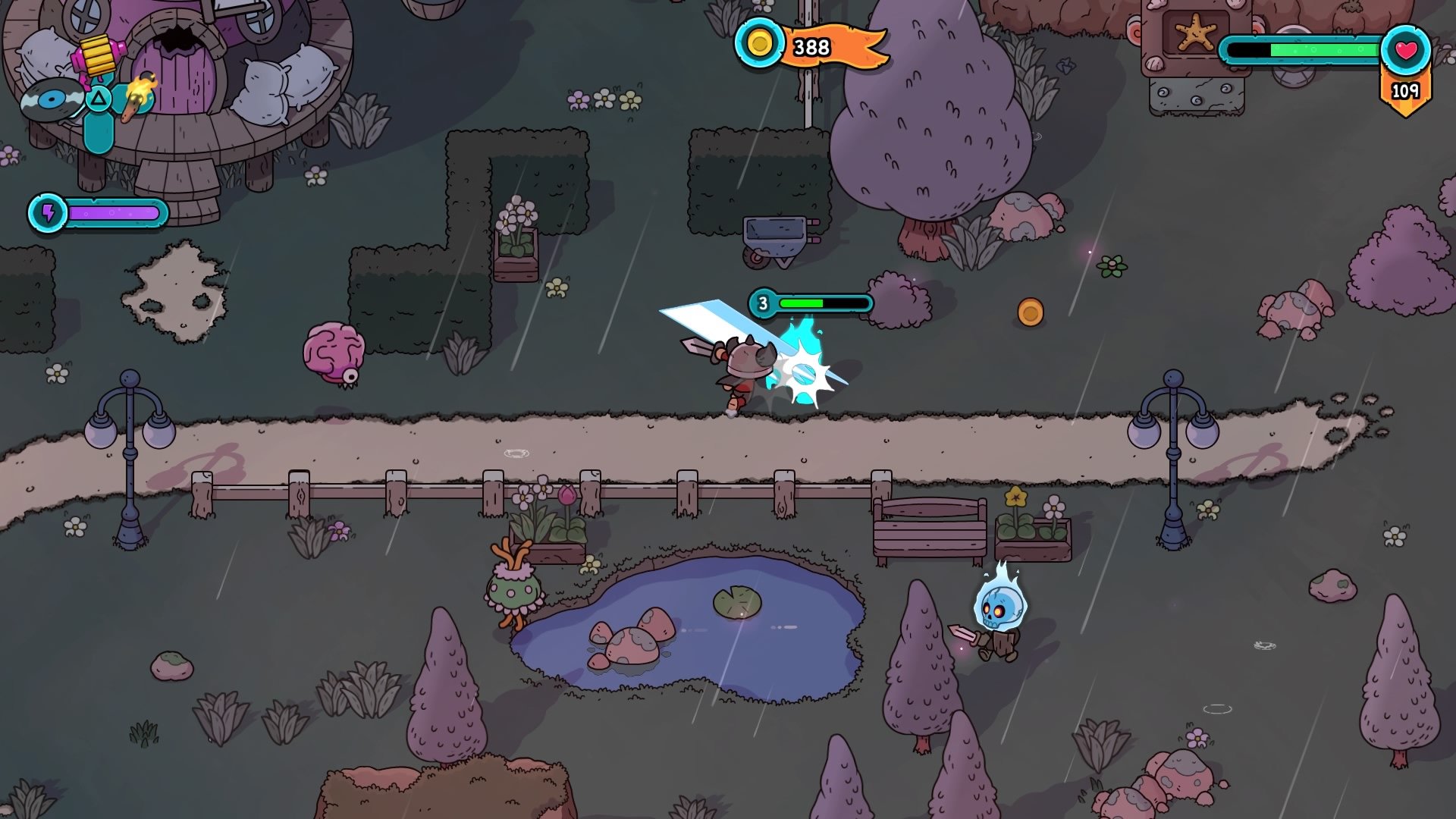 Stick it to ‘Em

Besides becoming more powerful with each new power level, you can equip your hero with stickers.  Stickers give you passive bonuses and occasionally unlock new moves, so having a solid set of stickers is important to a successful run.  Thankfully, stickers can be passed on to subsequent runs, ensuring you won’t lose them as long as you have the right amount of currency.  Stickers are often found within optional dungeons, but you can purhcase them from a vendor as well.  If you find yourself with duplicate stickers, you can trade them with local townsfolk.  For the most part, I enjoyed the simplistic sticker system, although I found myself wishing for a larger variety of related powers. 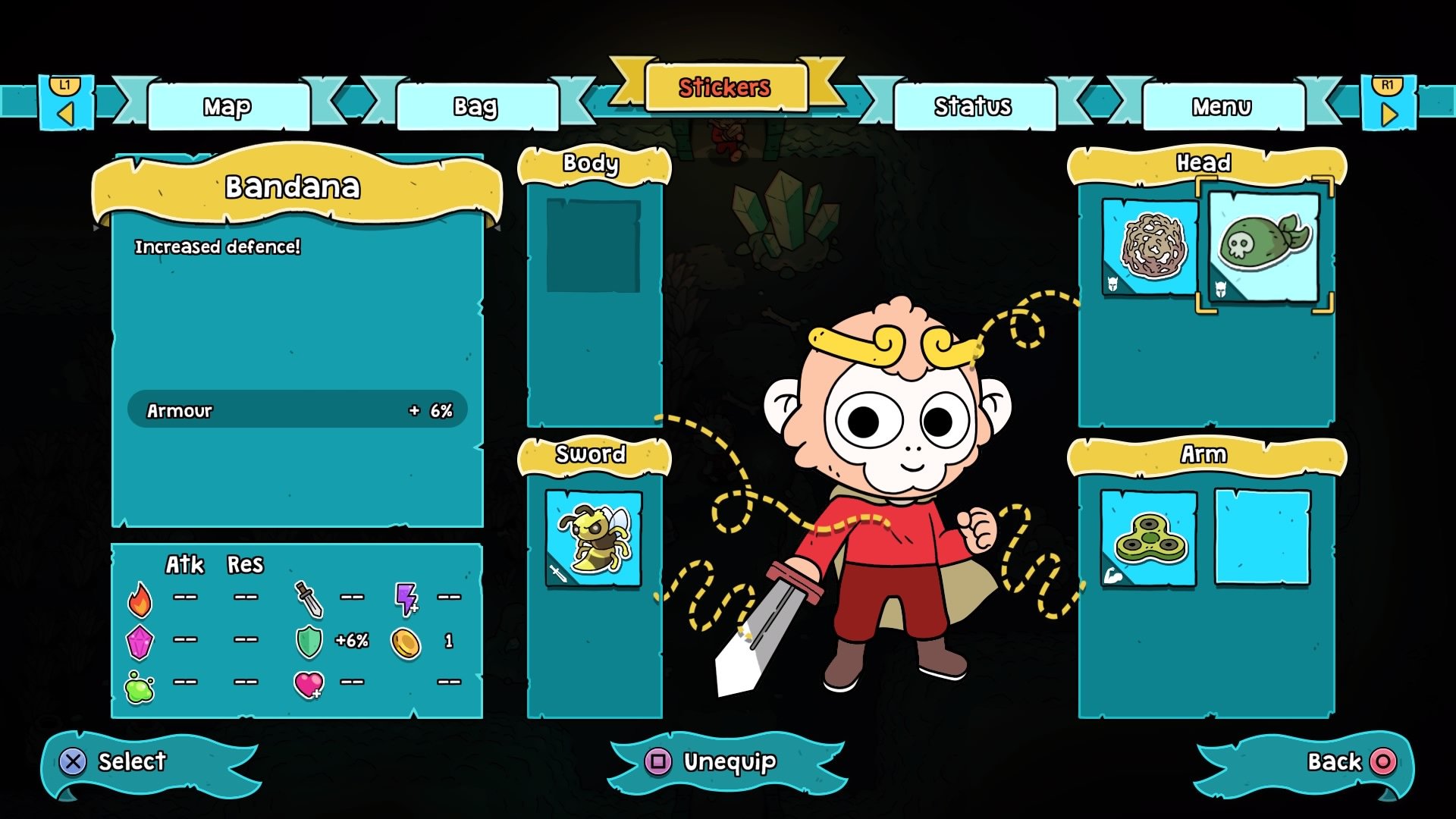 Swords of Ditto also offers cooperative play with one other friend, but it’s limited to local coop only.  Although I understand the reasoning behind it, I was disappointed with the inability to play online.  I was looking forward to playing the game with several friends, and after realizing it was local cooperative, many of those friends opted out.  This is unfortunate, as I’m sure that Swords of Ditto is more fun with a partner.

What a Lovely World

Swords of Ditto‘s greatest strength is its unique art style.  It’s similar to games like Cuphead, giving us colorful visuals with a distinct hand-drawn style.  The overall art design is pleasant to look at and mostly unique, with NPCs and side characters being a highlight.  The world of Ditto is also easy on the eyes, although the landscape and theme rarely changes.  Most of the map is a mixture of grassy fields and towering trees.  Although I enjoyed the look of everything, I would’ve preferred to see a larger variety in both environments and dungeon design.  Dungeons also have a similar look and feel across the board, and when compared to the wildly unique dungeons the Zelda series, Swords of Ditto lacks the thematic content and variety to be memorable.  Despite this lack of variety, the visual style is something that should be commended.  Without it, Swords of Ditto would suffer a great loss, as its appealing art style was a main factor that kept me interested in the game. 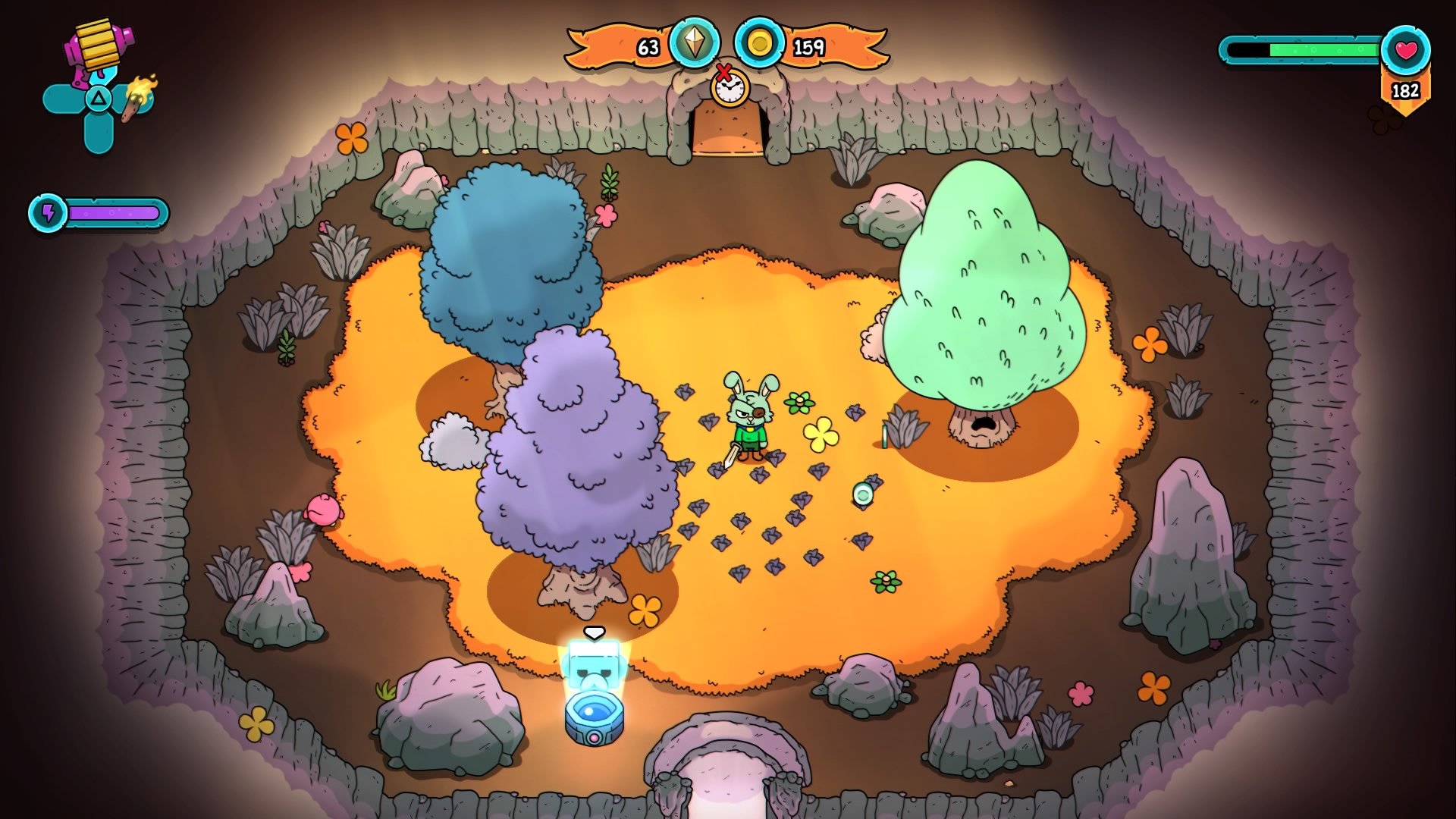 The Bottom Line on Swords of Ditto

Overall, Swords of Ditto is an entertaining but slightly shallow experience.  Some of the more interesting mechanics feel underdeveloped, and the combat can feel unfair and clunky.  The difficulty spikes and lack of explanation for some gameplay mechanics make things more frustrating than they need to be.  In fact, after my third or fourth death, I was ready to throw in the towel.  Instead, I carried forward, and the game rewarded me by unveiling new gameplay features.  Unfortunately, it all feels a bit too little too late.  With a healthy dose of luck and plenty of experience with games like Link to the Past, I was able to succeed.  I fear that some gamers might have a rougher time, and will write off Swords of Ditto before it fully reveals itself.  That might be a fair assessment though, as Swords of Ditto is an absolutely gorgeous game that is enjoyable, but ultimately forgettable.  Fans of The Legend of Zelda franchise will enjoy things a bit more than others, but the final product still leaves a bit to be desired.