After raising the bar for cinematic game presentation with Metal Gear Solid on the first Playstation, Hideo Kojima’s sequel on the PS2 was one of the most anticipated releases of all time. Kojima had already pushed the PS1 to its limits in every way imaginable, even using the controller ports and back of the game case. To see what he could do with more powerful hardware had fans frothing at the mouths. Kojima – in a genius move – used that anticipation to his advantage, pulling the grandest swerve in gaming history. While fans of MGS1 were chomping at the bit to resume the role of action-hero Solid Snake, Kojima fueled that desire with trailers that showed off the beloved badass infiltrating a tanker and doing everything expected, yet in a grander fashion. However, fans were shocked to find that the Tanker Mission they were shown pre-release was just a small part of the game.

Once completed, the game began anew and the player assumed control of a much different character: Raiden. I’m not ashamed to admit  I was one of the fans that reacted poorly to this ruse. So poorly in fact, I abandoned the game after an hour or so of Raiden play. His voice was irritating and I was doubly irritated to have the Colonel explain the basics of the game for a third time! This was when I first bought my original Xbox and had Morrowind and other games to play. I set aside Metal Gear Solid 2 and never saw the masterstroke that occurs in the second half of the game. Luckily, one of our Patrons (thanks Jeremy) recommended this for our streaming show, and I was able to finally experience it.

In terms of raw gameplay,Metal Gear Solid 2 expanded on MGS beautifully. Although it’s common to think back on MGS 1’s Shadow Moses as a large playground of stealth action, in reality, there’s a much smaller amount of guards and areas than nostalgia remembers. Once you reach the Sniper Wolf section, there’s a lot of backtracking and later portions feature linear staircase fire fights with terrible aiming and the fun human guards are replaced by less interesting robotic enemies in the latter portion. MGS 2’s Tanker and Shell are similar to how we nostalgically remember Shadow Moses. The areas are expansive with clearly defined areas for guards to patrol and the player to hide. New moves like hanging from walkways make it easier to move around and intuitively work with the other systems. A sandbox is only as good as the toys within and MGS 2 meticulously melds the mechanics to give the player an impressive amount of freedom. Coupled with the game’s modest length (longer than MGS) it encourages repeat playthroughs where the player can create their own fun with self-imposed challenges (non-lethal, collecting every dog-tag).

The top-down camera angle was a detriment to MGS 1 and still is here. The limited sight range often made when I was spotted feel unfair. It also forces the player to spend a lot of time staring at the vector graphics minimap instead of the beautifully rendered 3D world. Snake Eater would eventually fix this with its Subsistence release. Although a persistent issue, the camera is the only glaring issue I felt with the actual gameplay. 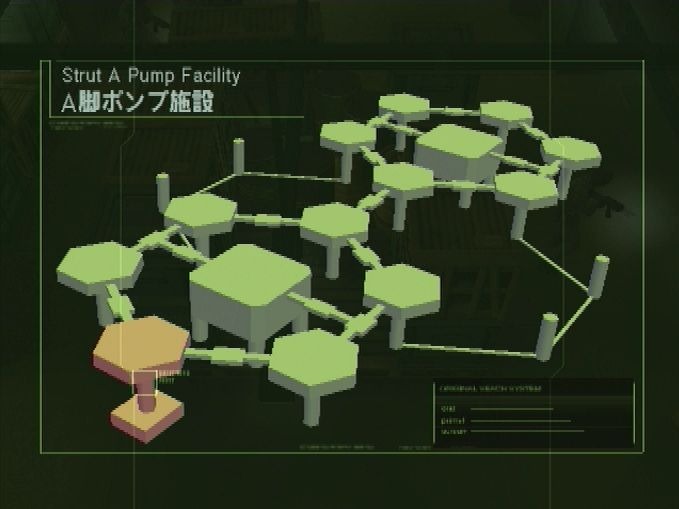 I really appreciated the Shell’s design. Linking the platforms in a hexagonal ring made it easy to get where I needed no matter which way I went. Dead-ends were rare and even without the very helpful map (with blinking objective) I always had a great sense of where I was.

Whenever backtracking was required there was usually a new wrinkle added to play. Either a new weapon, companion, disguise, or other mechanic was introduced to make traversing the same environment feel fresh. There was only one time where I felt let-down by the backtracking: When given the new uniform, I wasn’t aware it was meant to be used in a further area. Perhaps I missed this nugget of information during a codec call, but I was confused until a helpful member of the chat informed me. 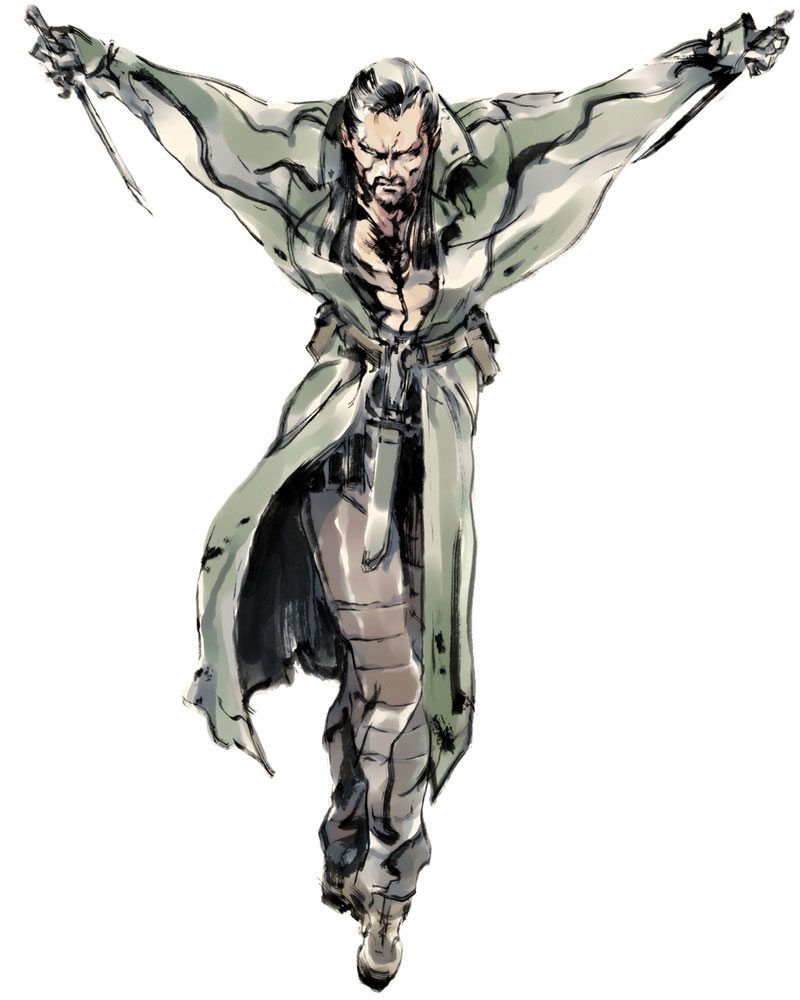 Boss battles were hit or miss. MGS 1 set the standard that Snake would use his wits to overcome enemies that appeared more powerful on the surface. While I enjoyed disarming Fatman’s bombs and the Ray fight, there were a few that were nothing more than hide-and-go-shoot. Vamp especially felt lackluster considering the build his character had and the potential his abilities teased. The final battle was also a let-down, mostly because it felt tedious. The mechanics of the finale were fine but the length couldn’t justify the same mechanics throughout, it needed an evolution to keep things interesting. It felt like the preceding cutscenes were so long that Kojima figured he should pad out the final gameplay sequence to balance the ending. It honestly felt odd to get control back after so much watching.

Overall the gameplay was a stellar refinement and evolution for the series and I adored creeping around the new sandbox. I rarely replay games but I could definitely see myself going back to the Shell to shakedown some dog-tags.

Kojima has been criticized for putting gameplay on the back burner behind his love for cinematic storytelling. MGS 2 often takes control away to tell its story, but the pacing was enjoyable for nearly the entire game, other than the slightly awkward transition to the final battle. The story is perhaps Kojima’s masterpiece for subverting expectations and providing a unique experience, especially in the AAA arena. This is a story full of extreme twists but I’d argue that most are hinted at throughout. Knowing a little of what was coming, I noticed many clues sprinkled within dialogue, some more obvious than others. Character names, word choices, and much more all contributed and I stayed on this bucking bronco of a narrative almost to the end.

The story is convoluted as heck but I was fully connected right up until a certain sequence of reveals spun me so far around I lost perspective on motivations. With so many characters switching sides and identities I found it hard to remember why anyone was doing anything! Although I’d obviously prefer to understand more explicitly what each character meant to the plot, I still felt connected to the experience and enjoyed the impact the conclusion had on me. Even if it left me with more questions than answers, I feelMetal Gear Solid 2 is still an effective piece of art even without total comprehension. The nature of its philosophical queries are supported by a bit of mystery and open-endedness. Heck, even Snake and Otacon ask what the heck is going on at the end. 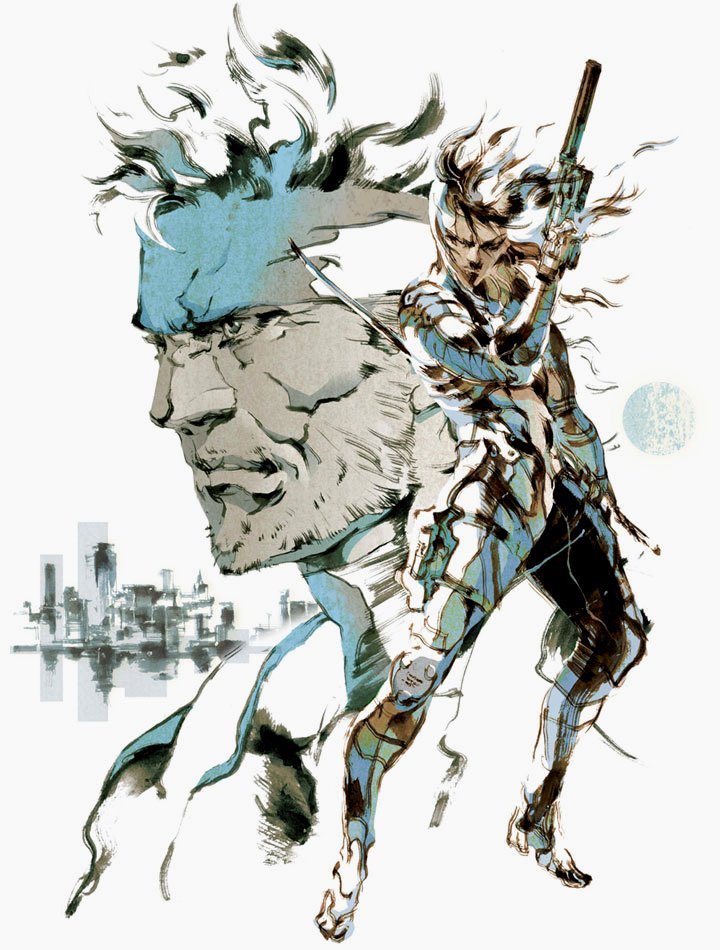 The ideas Kojima proposed over 15 years ago are shockingly more relevant today, a testament to his foresight and vision. I appreciate that Kojima told this story not just alongside the gameplay, but with the player. Incorporating the act of playing video games and their expectations is a masterstroke achievement, providing an experience specific to the medium of video games.

Metal Gear Solid 2 is a landmark achievement that in some ways has gotten better with age. The camera is archaic but I loved nearly every minute of exploring MGS 2. If you enjoy action, stealth, movies, or philosophical sci-fi, you should have a fantastic time with one of the greatest achievements of the medium.

If words aren’t enough, check out our playthrough.