The zombies of Resident Evil aren’t the only things full of a virus this week, as I got smacked with a pretty infectious case of the cold.  Due to this, I’m a bit slow to the punch (like our featured undead friends).  Much like runner RawDerps, I’m hoping to knock out this virus quicker than it came on.  With the original Resident Evil being one of the most influential horror franchises of all-time, let’s see if the speed run will impress use in equal levels of quality.

I’m a pretty big fan of Resident Evil, but will admit I haven’t spent a lot of time with the original game.  Instead, most of my time with the game has been in its “HD” release form.  I originally thought there weren’t too many differences between the two versions, but after watching this run, I can see them clearly.  I’ve completed the HD version in a speed run sense before, as unlocking the infinite rocket launcher weapon requires you complete the entire game in under 3 hours.  While my time isn’t nearly as good as RawDerps’ will be, it’ll be interesting to see some of the changes.

For starters, RawDerps plays as Jill.  You normally choose between either her or Chris, but viewers ponied up donations to get our favorite human sandwich on screen.  In addition to playing the original game and not the HD version, RawDerps is running on the PC port.  This has a few differences, but one main one; you can skip the animations for doors opening.

Anyone who has played Resident Evil knows just how spooky the doors can be, and just how much time they take to open.  This might seem like a minor time saver, but these door skips add up over the run.

The original game also features hilariously bad voice over work. Some of the voice lines, namely Barry’s “Jill sandwich” quip, are some of gamings’ greatest.  Sure, they’re groan worthy, but doesn’t that add to the charm?

There’s a few glitches shown off throughout the run, and one of the most commonly used ones is “pause cancelling”.  This is technically not a glitch, and is used in all the speed running categories (even glitchless).  This trick is pulled off by pausing and unpausing immediately after firing, which cancels the quick animation afterwards.  This lets you fire a bit quicker.

However, RawDerps doesn’t fire often, instead dodging and weaving around enemies as they appear.  As he takes on the first appearance of Yawn, the giant snake boss, RawDerps chooses to grab the crest item and completely ignore the boss.  As he makes his way through the painting puzzle and eventually onto the Aqua Ring area, the terrifying shark known as Neptune receives the same negligent treatment.

We don’t get to see any big boss action until Plant 42, the sprawling monstrosity of a sentient plant that resembles an alien more than a shrubbery.  Using pause cancelling and his trusty grenade launcher, RawDerps pretty much deletes the boss in a few seconds.

Much like Plant 42, the previously seen giant snake Yawn gets the same treatment.  After finishing up the shed area and moving further into the mansion’s depths, Yawn appears yet again to cause some havoc.  Having just picked up a case of acid rounds, RawDerps gives him a healthy beating.  RawDerps uses pause canceling and another trick aptly named “quick shooting” to take down the slithery boss with efficacy.

It’s important to note that the Any% category (the category RawDerps is running) mainly revolves around being selfish.  In this category, you ignore all the other survivors and save yourself.  While this is quick, it’s also a bit cruel, and I shed a single tear for Barry.  I’m talking about a figurative tear here, I’m a tough guy watching Resident Evil, after all.

Conversely, I shed literal tears as RawDerps enters the underground caverns, my least favorite area of the game.  Not only is it visually boring and a chore to clear, but it also holds the creepiest boss of the game, Black Tiger.  You’d think it’d be a big feline.  You’d be dead wrong.

YEP.  IT’S A GIANT SPIDER.  If you couldn’t tell by my obnoxious use of caps lock, I’m not a huge fan of spiders.  My aversion to the eight-legged foe makes the fight that much funnier, as RawDerps shoots a few grenades clear over the spider’s head.  These connect with a door covered by webs, opening up the door for a quick escape.

After Black Tiger, the run nears its end.  Dodging becomes even more important as RawDerps heads into the sub-levels.  Here, zombies are packed closely together, and getting grabbed by one could mean instant death.  Thankfully, RawDerps dips and weaves through the undead, leaving them behind.

The final fight with Tyrant ends with a sputter as well, as RawDerps cleans him up in just 3 hits.  As he leaves Wesker and his monstrosity behind and heads to the helipad, RawDerps seals another great run at SGDQ 2017.

That’s all!  If you want to check out RawDerps full run, you can watch it over here.  See you guys for the next run! 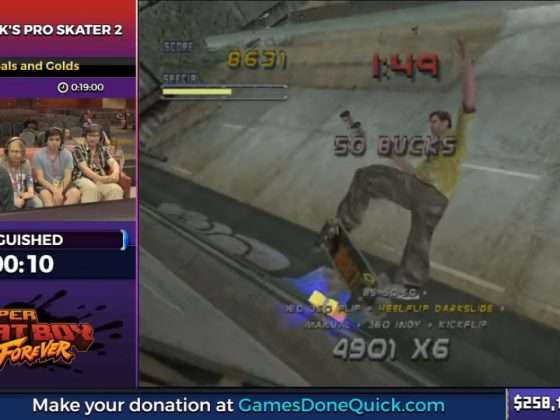