As soon as I watched the Pokémon Sword and Shield trailer, specifically once the logos appeared at the end, I was almost certain that every man and his dog on the internet would be talking about a connection between this game and another particular Pokémon title. The weird thing is, apart from a single Reddit thread that I found by minato994 that came out recently, the community is oddly quiet on this one.

So, before I sound like a nut job, let’s throw out a few premises:

Therefore, while I wouldn’t bet any money on it, there is a good chance, with both ample timing and astatic correlation, Sword and Shield are somehow directly connected with Gen 4’s Diamond and Pearl.

Did I lose you? Do I still sound like a nut job? I’m glad I can’t hear your answer. 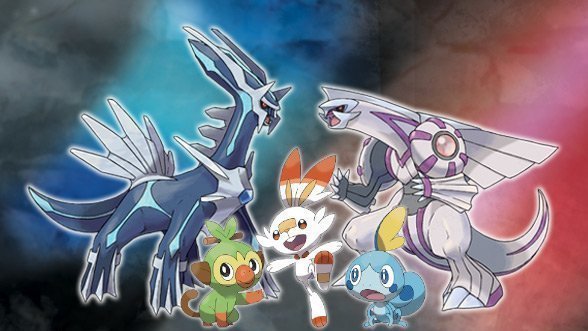 Then consider the fact that Red and Green came out in 1996, followed by a western release the next year to have a remake in 2004, 8 years after its original Japanese release; The Gen 2 games came out in 1999 to only be followed up with a remake a decade later in 2009 and Gen 3’s Ruby and Sapphire released in 2002 and was remade for the 3DS in 2014, 12 years later. Pokémon Diamond and Pearl are the next releases in line, coming out originally in 2006, and now the year is 2019.  It is now a full 13 years since the Gen 4 games came out and we literally know nothing about the supposed big remake. While the time between each generation and its remake have scaled up with the pool of new entries into the series, it’s still ample time for a Gen 4 remake. So maybe as Game Freak, who quite literally said they are hoping to surprise players in 2019, might blow our minds by making Pokémon Diamond and Pearl be apart of Sword and Shield. And it’s not even like Game Freak hasn’t done this kind of thing before with Gen 1’s Kanto region being featured in Pokémon Gold and Silver as Gen 2’s end Game. So it is very possible that we will be getting Gen 4’s Japan inspired Sinnoh region alongside Sword and Shield’s England themed Galar region.

While Diamond and Pearl being part of Sword and Shield is far from confirmed, a remake of Gen 4 would be a second Gen 4, right? And Gen 4 * 2 =  Gen 8, therefore Gen 4 remake = Gen 8, which is Pokémon Sword and Shield. Game Freak and Nintendo, absolutely genius. Guess I need to go out and buy a Switch for this game now.

Anyhow, I think that was just a bit of fun. While I personally have my doubts that we will be tossing a Master Ball at Dialga or Palkia in 2019, don’t be surprised if we get the chance to do so in late 2019 with the release of Pokémon Sword and Shield.

Jayden is currently studying a Bachelor of Games Design with a passion that stems from his early childhood. Growing up on the Nintendo 64 and moving to the Xbox in his early teens, he has handful of titles that he is passionate about. His favorite game is Banjo Kazooie.