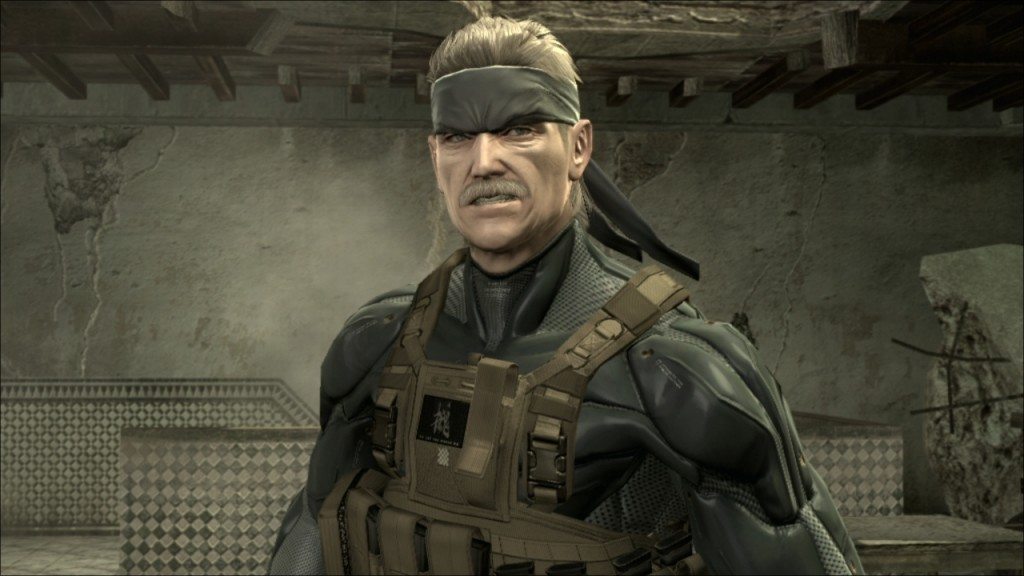 Yes, a hot take on a nearly 10 year old game, but nostalgia is fun. I recently completed MGS 2 and 3 for the first time and also went back to MGS 1 for my second ever completion. Fresh in my mind, it’s prudent to revisit MGS 4 for my first time since release.

After the magic of 1-3, I was shocked at how DULL MGS 4 started out. It highlights Kojima and the franchise’s weaknesses, and lacks the magic spark and attention to detail the series is famous for.

I haven’t played Portable Ops, Acid, or any other portable Metal Gear other than Peace Walker in case those are worse.

Placing Snake in the middle of a city firefight is a fascinating proposition. We’re used to seeing him one-man infiltrate against a larger force, so the prospect of navigating between two factions is fresh. It vividly illustrates this type of war, fleshing out the game’s themes, and setting the table.

But the same old system of triggering an ‘ALERT Phase’ while in the middle of a two-party shootout doesn’t work. The dozens of combatants are well aware of each other, and the Alert phases feel like they were left in this section as a mistake.

MGS 4 opens with far too many corridors, and it hurts the core stealth gameplay. FF XIII is another huge franchise that decided to copy the COD format in the PS3 era.

When I think of the main gameplay in a MGS game I think of a mostly open space, with plenty of places to hide from patrolling guards. The second floor basement in MGS 1 is a great example of a simplistic grid with Snake playing a stealthy game of Pac-Man.

Corridors suck the stealth out and severely limit options.

For example: The Sniper Wolf corridor. 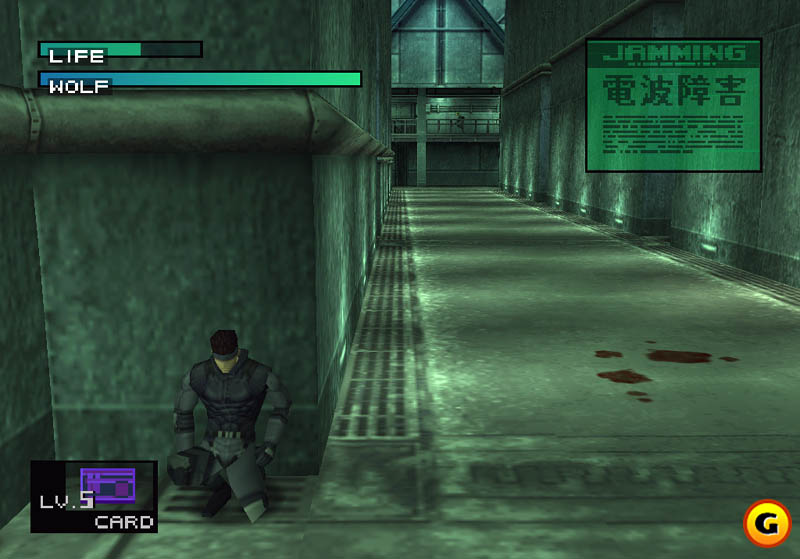 This corridor is used by Sniper Wolf to trap the stealthy Snake. She knows he can’t use his clever ways to get through. This contributes to the feeling of a trap, adds tension, and forces Snake to duel his way past this obstacle.

Or how about the pre-Ninja corridor:

It’s designed to make the player feel confined and linear, as they’re forced to push ahead through horrifying images. The corridors feel negative and work against Snake’s strengths, but are used sparingly to present a negative feeling on purpose. The linear approach returns with the endless stairs full of guards later on, and that’s one of the weaker points of the game.

For most of MGS 4’s first chapter, I wondered what game I was playing. There were few opportunities for stealth. While I’m sure hardcore Big Bossers can ninja their way through, I think the average player will spend far too much time mowing enemies down with machine guns. MGS 4 is mediocre as a cover shooter. Plus, the series has trained me over three previous games that resorting to full-auto mayhem is a last resort after failing at my ‘sneaking mission’.

MGS V Gets it Right

MGS 4 felt like a growing pain to reach The Phantom Pain’s wonderful open world take on stealth. MGS V is peppered with the best parts of base infiltration and allows the player to approach from any angle, while choosing from a large range of weaponry and gadgets. 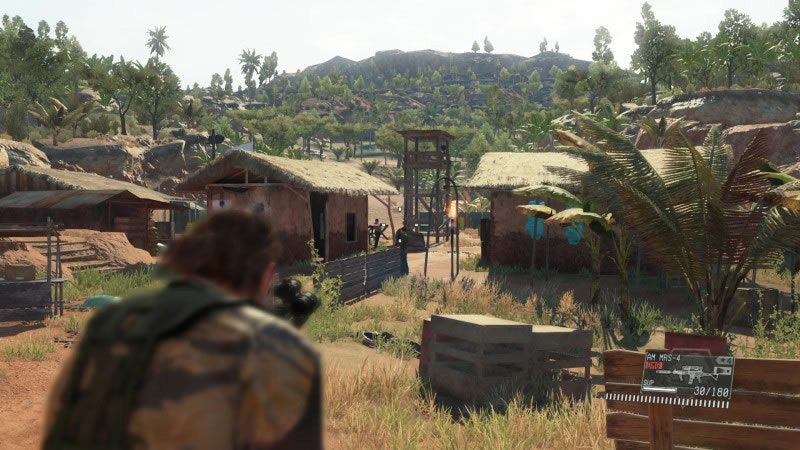 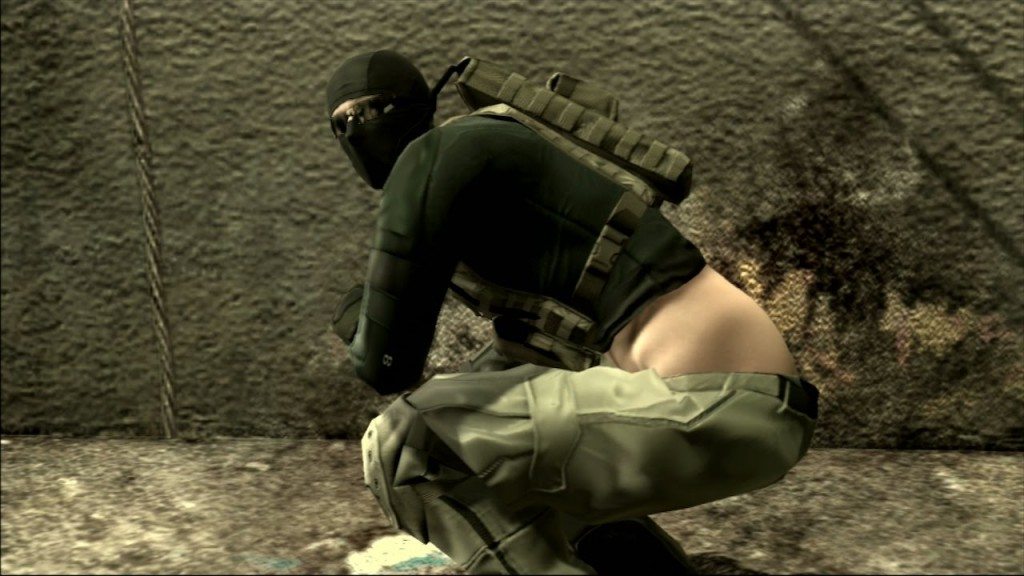 Kojima cleverly snuck in a butt joke in MGS 1 but it worked so much better:

Meryl knocked out an enemy soldier and stripped his clothes for a disguise. Perhaps she even left him hanging butt-up to distract Snake as he came out of the cell. She heard him talking through the cell wall and the distraction worked enough for her to get the drop on him. This use of butt created a memorable meet-cute that fleshed out her character.

Johnny in MGS 4 has disabling diarrhea. He’s a constant liability to his team that appears to resent him. They visibly cringe at his smell and the player is forced to watch far too many scenes of his bodily functions and terrible slapstick. The end of the episode pays this off when Liquid Ocelot gain control of every soldier in the vicinity through their nanomachines…except for poopy butt Johnny. Like Raiden before him, Kojia pulled a switcheroo, making us hate Johnny before redeeming him. But – like most of my criticisms of MGS 4 – it goes on far too long. Instead of the lightning quick butt shot in MGS 1, we’re treated to far too many poopy-Johnny jokes that fall flat and confuse the tone.

You shouldn’t put Snake in an ultra realistic/modern setting and then poop out the campiest poop jokes of the entire franchise. Snake Eater had ridiculous moments, but the tone was consistent. MGS 4 is all over the place.

I didn’t even mention the briefing! 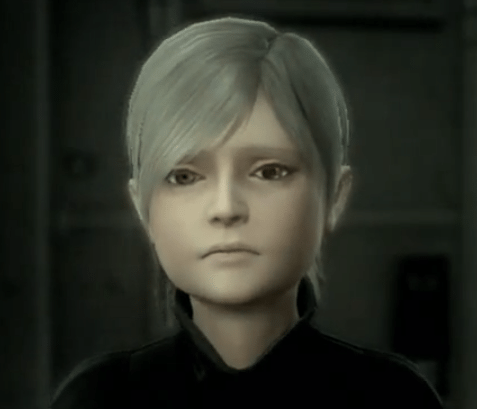 Metal Gear – “This is Big Boss… The mission is infiltration. Make sure that the enemy does not discover your whereabouts. …Over”

MGS 1 – Stylish shots of Campbell’s command room and Snake infiltrating via water in a spy sub. We quickly learn the first goal of the mission and hear about the enemy bosses.

MGS 2 – In the pouring rain, Snake dives off of a friggin’ bridge to sneakily land on a Tanker.

MGS 3 – Snake performs the world’s first HALO jump, hitting plenty of trees on the way down, but still landing like a badass.

MGS V –  Sure the crawling is slow, but it fits the story, adds tension, and doesn’t outstay it’s welcome. Discovering what happened to your character is done extremely well, as the Doctor delivers the devastating news, raising the stakes. You get to know the hospital workers before seeing them slaughtered by a powerful enemy. Narrowly escape many fatal situations that hint at the horror Kojima could have explored with Silent Hill.

MGS 4 – Old Snake and Old Campbell drone on about the mission while a child we’ve never met has a mini nervous breakdown about old men not eating her burnt crappy eggs. I had a bad feeling about this game when I saw her emote four times over those eggs. These scenes could use a serious edit, but Kojima had perhaps become too powerful to face criticism. Why should anyone tell the golden goose his ideas could use improvement?

The appearance of Liquid Ocelot, his sparse (won’t be using that word often) dialogue is powerful and his actions are even more so. The closure to the first Act hints “the best is yet to come” . For the sake of my second playthrough, I hope so.

See for yourself with our playthrough