My first foray into the magical world of card games was with Star Wars. The force-ful franchise was the perfect gateway into a genre that required ample money, time, and patience. I was lucky to have a close friend group that played and we were just old enough to work our first jobs and buy those tantalizing packs of unknown goodness. I had mostly highs with the game, and learned a few lessons about gambling along the way.

Even though I’ve never gone back to the game and never will, it still provided me something that I’ll appreciate forever (in addition to the gambling lesson). 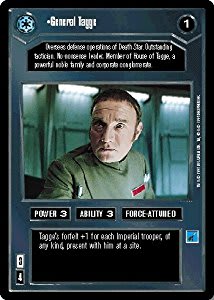 These two appear in A New Hope, having a heated debate about the Death Star, which ends in Motti receiving a brutal force choke from big Vader after insulting the Sith’s ‘sad devotion to that ancient religion…’. The scene does a tremendous job of characterizing both men, the power of the fleet and Death Star, as well as the cut-throat politics behind the Empire, punctuated by the force choke and knowledge that the Emperor has dissolved the council permanently.

The card game needed characters, so every face that appeared on screen was fair game. Now I could learn the names of just about everyone, as well as a bit of backstory. It wasn’t just characters either, but all of the ability/action cards took a still-image from the trilogy and expanded on it. I loved the lore sections, as I learned more about my favorite universe, one paragraph at a time. 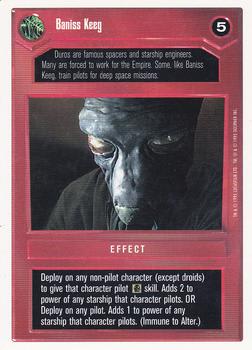 “Duros are famous spacers and starship engineers. Many are forced to work for the Empire. Some, like Baniss Keeg, train pilots for deep space missions.”

This fella only appears for a few frames as the Mos Eisley Cantia flashes dozens of different aliens at us in an instant, to show the exotic world outside of Luke’s farm. The lore adds so many interesting seeds of information that stoke the fires of imagination. Is a spacer a substitute for sailor or does it mean something more? The Empire forcing many to work for them further paints them as baddies and makes me wonder of their resistance against it. Why not all? Did they partially resist? Also, ‘deep space’ missions sound extra dangerous and interesting.

The charm of Star Wars comes from the imaginative world and characters that we might see for a split second, leaving us to fill in the gap, maybe inspiring other creative works. We saw from the Prequels that over-explaining these ideas can kill the magic faster than you can spell midichlorians. The card game expanded on that idea perfectly, and increased my bond with the franchise.

The Dark Side of cards

This wasn’t a chess set that came with every piece required to play. Star Wars CCG and other card games usually require the player to purchase packs with no guarantee they’ll receive something good or useful. This sounds crazy, but they get away with it by offering the small chance of a rare and valuable card. These slot-machine practices are all the rage right now, especially with another Star Wars game (Battlefront 2017) coming under fire for releasing in-game weapons/power-ups/characters in random loot boxes.

Being young I had a very limited amount of spending money. My parents bought me a few packs and I spent a portion of my Saturday job money earned by washing cars at a dealership. While waiting for a bus at the mall to take me home, I bought a few packs to pass the time. An urge came over me to keep buying one more until I had spent all of my meager pay. I didn’t end up with the card I want and felt awful. The rush of adrenaline gave way to empty disappointment and shame.

I feel two ways about these practices marketed towards children. On the one hand, kids are impressionable, still developing, and could potentially pick up bad habits.

To argue this however, I feel that kids should be able to make low-consequence mistakes to prepare for adulthood. I may have spent $40 that day and felt like I lost it all. I’ve always remembered that feeling. It would be much worse if the first time I made that mistake cost me everything I have now as an adult.

It can be more extreme with some kids having access to their parent’s credit card on a phone or tablet, but some of that has to come down to parenting and supervision.

Check out the video for a much more thorough discussion of card games from Pokemon to Hearthstone.