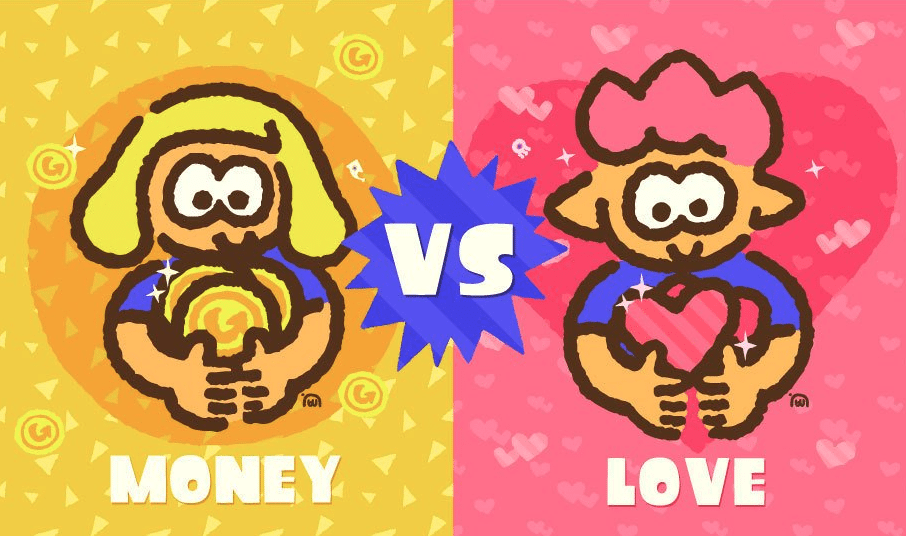 Nintendo has revealed the teams for this month’s North American Splatfest. The classic debate of money vs. love is taking center stage for Splatoon 2‘s next multiplayer event, which kicks off next weekend.

While last month’s Splatfest was a global affair, February splits the event into regional variations once more. Europe’s Splatfest is up and running today, pitting pickle-lovers against pickle-haters. North America’s event, however, will see Team Money fighting against Team Love. Nintendo VS, the company’s official competitive multiplayer Twitter account, shared the team themes recently, putting the start time at 9:00 p.m. PT / midnight ET on February 16th. As always, the Splatfest will run for 24 hours.

Once you decide on Team Money or Team Love, you can pick your side at the video screen in Inkopolis Square as soon as it appears in game. Then, when the Splatfest begins, join your team in some Turf Wars to prove once and for all which is the ultimate key to happiness and fulfillment.

The last Splatfest had players choose teams based on movie genre preference: action or comedy, with Team Comedy coming out on top. The winner of the competition is determined by three numbers: popular vote, solo wins, and team wins. So be sure to fight with some friends in addition to on your own to support your preference for money or love as well as humanly possible.