Most games directed by David Cage are highly cinematic, and Detroit: Become Human is no exception.  It tells the story of a near future where androids walk among humans, and explores the true nature of humanity.  The story has many branching paths, as your decisions and actions can have huge ramifications on the rest of the tale.  The sci-fi themes explored are ones that we’ve seen before, but hopefully David Cage and his development team at Quantic Dream can make it stand out with a unique narrative spin.  Detroit: Become Human asks some interesting questions, but are the answers all that intriguing?

Note: This review will contain NO SPOILERS for the story of Detroit: Become Human.  Due to the branching nature of the story, nothing beyond the opening sequences will be detailed. 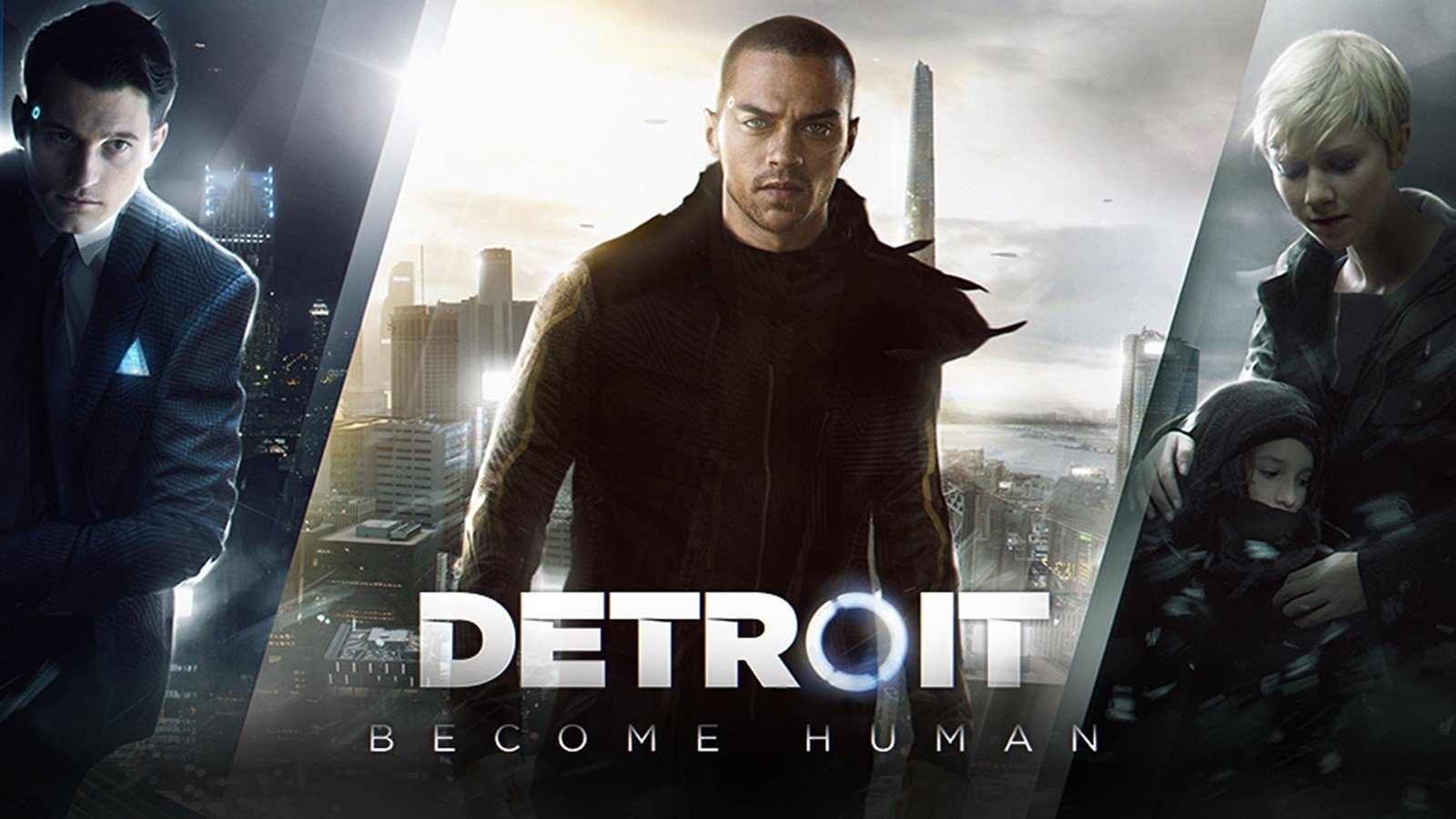 The Tale of Three Minds

The story also follows Kara, a standard commercialized android meant to perform common household chores.  Kara finds herself in a dysfunctional home with an abusive father, and is forced to make tough decisions regarding who she takes orders from.  Kara’s story can be a bit predictable at times, but contains some of the game’s most interesting sequences.

Our final characters is Markus, who serves a caretaker to a wealthy but aged painter.  Markus seems to be a bit more advanced than Kara, but doesn’t come close to Connor’s superior programming.  Markus generally watches over things for his owner, monitoring his health and performing tasks that are too complicated for the old man.  It’s within Markus’ story that Detroit: Become Human asks the biggest questions; what it means to be human, whether or not you can quantify the value of organic life, and so on.  Markus’ journey holds some really interesting ideas and equally riveting sequences, and quickly becomes the most interesting of the bunch.  As the game progress, his story veers into some pretty tried territory, but his journey remains interesting and exciting throughout the game’s over 10 hour playthrough.

The Definition of Life

While the overall tone of Detroit is quite depressing and tells a cautionary tale of advancing technology, the game’s multiple characters provide different perspectives on the situation.  Connor is cold and calculated, and his abilities to quickly diagnose and process information presents big doubts into the efficiency of the human mind.  Kara’s story leans into the more dramatic and emotional side of humanity, and watching her relationship with a  young girl grow over the game’s story is a rewarding experience.  Although Markus’ story can be quite heavy-handed at times, it never really oversteps its bounds, and explores some cool ideas in interesting ways.

Generally speaking, the main cast of androids and their surrounding characters are fleshed out quite well, but there are a few one-dimensional characters in the bunch.  For the most part, Detroit has some decent character building and believable character motivations, but the story can lead to some predictable places.  However, even when the story beats are easily predicted, they remain interesting and surprising.  At points the narrative can get exceptionally dark, drifting into territory akin to that of a particularly disturbing episode of Black Mirror.  I was surprised at just how creepy and effective some scenes were, only aided by the impressive amount of atmosphere that Detroit‘s visuals can produce.

The overall narrative is incredibly ambitious, and while it does so in stride, it’s not without some flaws.  The story can be wildly convenient, with characters gaining basically super powers when the story calls for it.  These abilities are never addressed or explained, and feel like a cheap mechanic used only to direct the story.  Things are usually interesting enough that it’s easy to forgive these obvious leaps in logic, but it weakens the strength of the story overall.  Some late game twists present huge plot holes, and while the world of Detroit is sound, the writers play fast and loose with the game’s own rules.  Out of the three, Kara’s story is the most predictable and hits some cliches, but Markus’ tale is the worst offender in deus ex machina.

It’s important to note that one major feature of Detroit: Become Human is its branching nature.  The choices you make in the game have very weighty consequences, and having a character live or die based on your decisions is a very real possibility.  As such, your initial playthrough will most certainly differ from mine, which is both a positive and a negative depending on what kind of closure you expect.

Like most Quantic Dream games, Detroit: Become Human is purely an adventure game.  There’s not a lot of fighting or shooting, but rather a healthy amount of dialogue choices, moral decisions, and quick time events.  If you’ve played any of Quantic Dream’s past games like Heavy Rain or Beyond: Two Souls, you have a pretty good idea of what you’re getting into.  For those uninitiated, you control your character from a third-person perspective, exploring your environment and engaging in conversations.  The highly cinematic story leads to set piece moments which have you completing quick time events and making choices which greatly impact the story.  As far as the adventure genre goes, Detroit: Become Human doesn’t make any leaps or bounds within the gameplay itself.  However, it does some incredibly interesting things that effect the narrative going forward based on your decisions within that gameplay.

The game rewards astute observation by unlocking new options in dialogue and different paths of action.  For instance, an early sequence offers you the opportunity to investigate a corpse.  This investigation is tied into a sort of “detective mode” that you can toggle, allowing you to reconstruct scenes and find new clues.  It’s an interesting gameplay mechanic, although we’ve seen it before in games like Batman: Arkham City.  Examining the corpse eventually leads you to the location of a gun, which you can choose to pick up or leave behind.  The following action sequence can play out very differently depending on whether or not you picked up that gun, which in turn opens up different end results.  This is a small example of your actions changing the gameplay and outcome of the story, and it’s an idea that is constantly used in bigger and better ways further in the story.

After you’ve completed a chapter of the game, you are presented with a flow chart detailing your choices and the resulting branching paths.  You can see what options you uncovered on your initial playthrough as well as the locked paths you did not explore.  This flowchart also lets you see the overall world statistics of what everyone else playing chose.  This is an interesting feature and was a real treat to check after every chapter, as it was intriguing to see what moral choices people made on their own personal journey.  Where I chose to be violent, others chose to be passive.  Where others chose to uphold promises, I broke them.  Considering the huge weight behind these decisions, it was always refreshing to take a peek at what others had done.

To be honest, I was absolutely repulsed by some of my peers’ decisions; only 56% of my them were nice enough to pet a dog when given the opportunity.  If anything, Detroit: Become Human shows just how horrible people can be.

The story isn’t the only part of Detroit that is highly cinematic.  The entire presentation, especially the impressive HDR lighting, is incredible to behold and pushes the standards on expectations for AAA games.  Although I did encounter a few unloaded textures running on an original PlayStation 4, I was consistently impressed with the game’s near-photorealism.  The stunning look and feel of the game added a noticeable weight to many scenes.  Even some of the more basic and mundane sequences come out looking exceptionally interesting, purely due to the quality of the art direction.

Detroit: Become Human is full of conversations and lengthy dialogue sequences, so you’ll have a lot of face-to-face time with the characters.  Luckily, the quality of the facial animation is just as good as the aforementioned lighting effects, giving characters incredibly life-like features.  A large majority of Detroit‘s characters are based on real actors, and I was surprised at just how detailed and accurate the facial capture was.  Detroit is right up there with games like LA Noire and Uncharted 4 when it comes to realistic looking character models.  The quality of the visuals adds a definite boost to the overall experience, as most of the performances delivered by the cast are top notch.  Even some of the more cliche characters are played with a certain wit, such as the alcoholic and introspective washed up detective Hank.

Despite the disjointed nature of the narrative, the world has a very identifiable look and feel.  As I said earlier, the game can often feel like an episode of Black Mirror.  Meaning that, while it might deal with some pretty big sci-fi ideas, the story is set in a future that is grounded enough in our own reality.  The world Detroit presents is not unfamiliar; instead, it’s a world that feels more and more certain with every passing day.  The world is backed by a score that is both adaptive and pleasant.  There’s a good mix of orchestral and instrumental tracks, along with some well-produced metal and pop music when applicable.  Overall, the music in Detroit is always appropriate for the tone of the scene and manages to add a good amount of emotional weight to certain dramatic scenes.

I went into Detroit a bit skeptical.  After enjoying the dark and twisted serial killer tale of Heavy Rain but being disappointed by the heavy-handed supernatural story of Beyond: Two Souls, I was apprehensive.  Luckily, Detroit managed to impress me with its absolutely stunning visuals, its fresh take on some cliche sci-fi tropes, and its branching narrative that is completely shaped by your actions.  Unlike other games that boast an adaptive narrative (I’m looking at you, recent Telltale releases), Detroit means it when it warns you of consequences.  Characters can die, mysteries can be left unanswered, and very big decisions are left up to the player.  By the time the credits rolled, I was ready to jump right back in and start a second playthrough.  Your initial playthrough of Detroit will take anywhere from 10-15 hours, depending on how your story plays out.  If you find the story interesting enough the first time, you’ll undoubtedly head back in for a second pass; checking out other decisions and pushing your morals to surprisingly effective limits.

The overall narrative isn’t flawless; there are plot holes and a lot of conveniences when characters need it the most.  The game can also be a slow burn, which might dissuade more action-orientated gamers after a few hours.  For those who see Detroit through to the end, you’ll walk away either depressed, inspired, upset, joyous or completely soured.  However, your actions will have a direct hand in the outcome of your story, and you will ultimately shape the kind of story you want to see.  In the end, I found the more ridiculous aspects of the game easily forgivable thanks to some impressive performances, fresh ideas, and the beautiful and vibrant world.  If you’re a fan of adventure games and sci-fi, you’ll definitely want to check this one out.