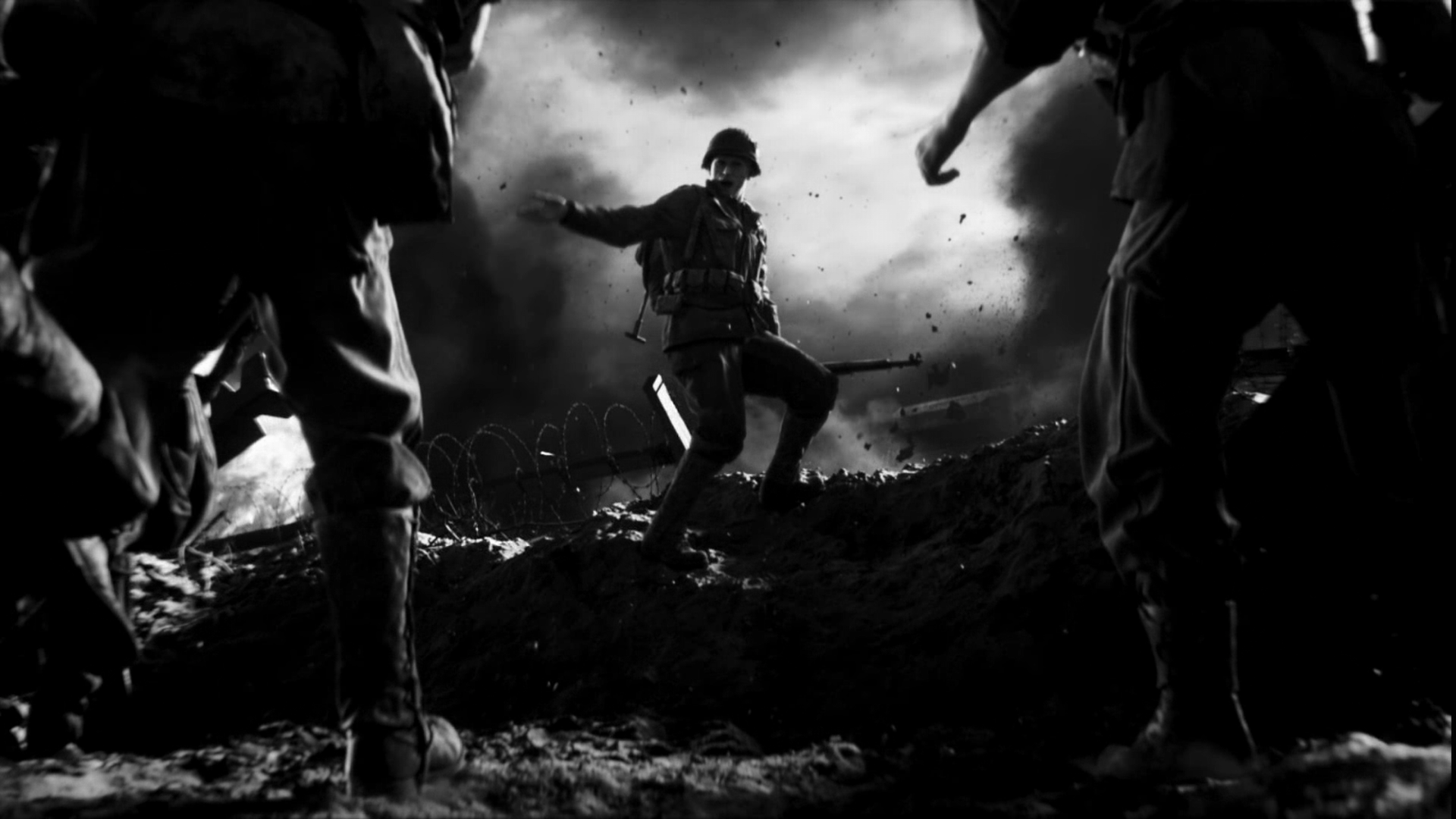 Back to Basic – Call of Duty: WWII Review

Call of Duty: WWII takes the franchise back to its roots by foregoing the recent trend of “futuristic warfare” for the gritty reality of 1940’s war. This newest iteration of the series is developed by Sledgehammer Games, most well known for their previous Call of Duty entry, Advanced Warfare. Call of Duty: WWII looks to tell a powerful story with its single player campaign, keep the battlefield alive with multiplayer, and encourage gamers to fight off hordes of the undead in “Nazi Zombies”. Does this three-in-one Call of Duty package impress, or is it a step backward in more ways than one? 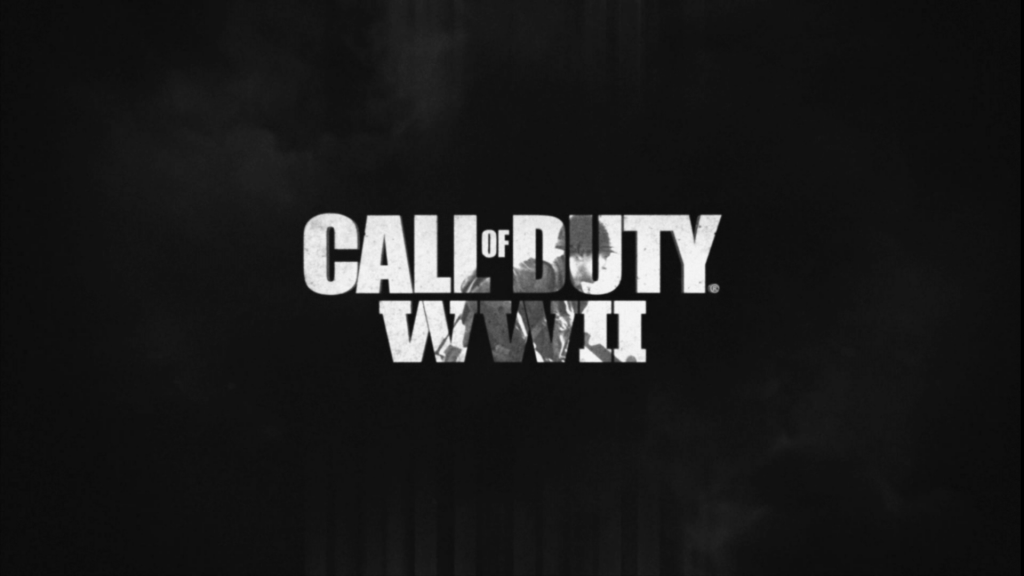 The Horrors of War

The main campaign stretches across 11 missions, mostly following a group of young soldiers fighting through Nazi occupied territory. You play as Daniels, a young soldier in the famous first platoon. Joining you is a number of cliché characters, including Zussman, the witty Jewish kid born in New York. There’s also a nervous bespectacled guy named Stiles, and an even less notable character named Aiello. Along with Sgt. William Pierson, played by Josh Duhamel, these characters take up the bulk of the screen time. From their first fight at the beaches of Normandy to the harrowing Battle of the Bulge, the campaign gets us well acquainted with these characters and the horrors around them. 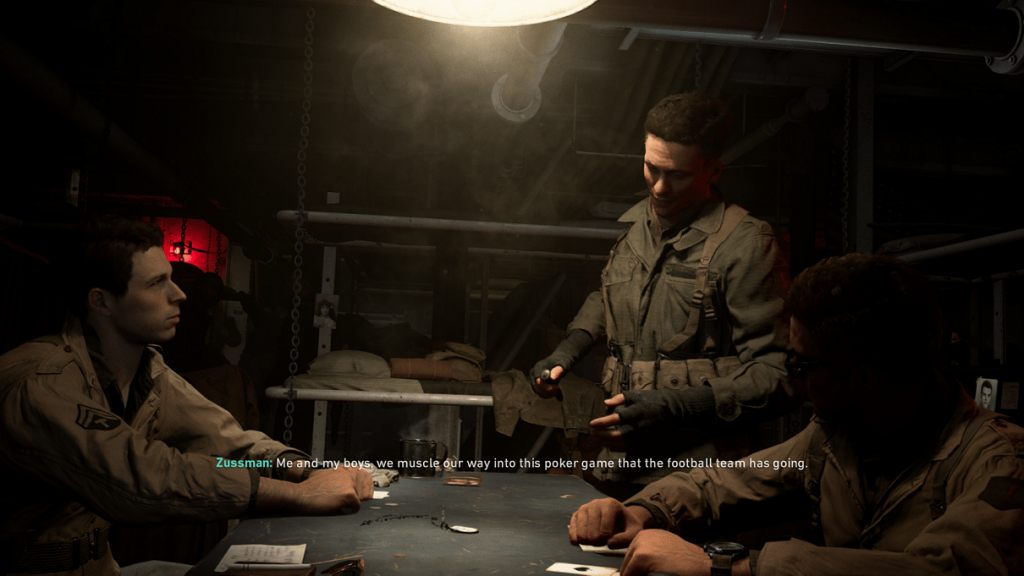 This is where Call of Duty: WWII suffers the most. The campaign’s story hits all the expected notes of a dramatic telling of the soldier’s life in World War II. There’s plenty of “shell shock” moments, upsetting deaths, and horrendous war crime violence. None of this seems to stick or resonate though, mainly due to a lack of emotional connection to the characters. Out of the entire cast, Zussman is the only character you’ll grasp onto. If it were any other Call of Duty title, the characters may not matter as much. However, Call of Duty: WWII puts its characters and story in the forefront, noticeably changing the tone of the experience. 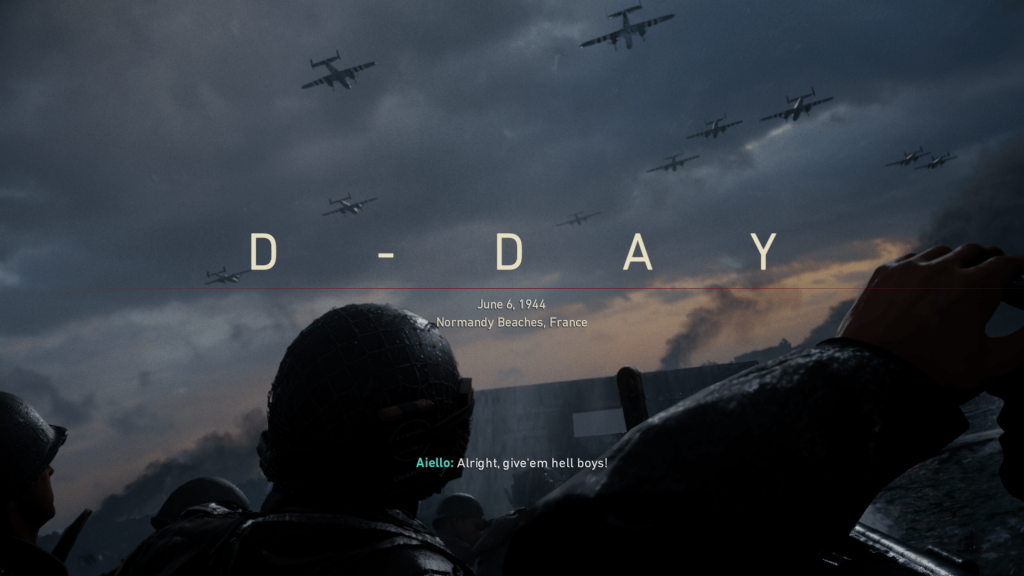 The focus on narrative over gameplay isn’t the only change in Call of Duty: WWII‘s campaign, but it’s one of the most notable. Most of the levels feel more like interactive cutscenes than anything else, often taking player control away. You’ll shoot a few guys, and then enter a canned sequence of someone talking to you. Upon gaining control again, you’ll run to the next objective, where more often than not, there’s a cutscene waiting for you. This constant switch between active gameplay and passive storytelling breaks up the action in an annoying way. 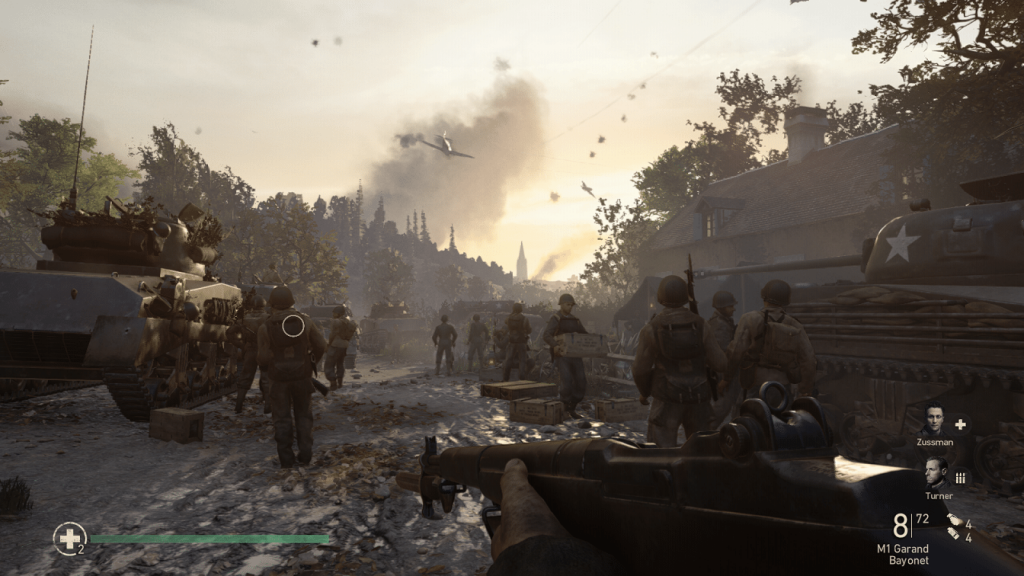 Since gunplay isn’t as consistent in the campaign, there’s been a few changes to the core gameplay. Instead of regenerating health, you now pick up and use health packs as you see fit. You’ll no longer be hanging back and hiding behind a rock, waiting for your health to refill. Instead, you’ll have to brave the gunfire and find a medpack, or request one from an ally.

Medpacks aren’t the only thing your partners can offer, as each unique character has an equally unique ability. For example, you can request a grenade refill from Stiles, or ask Sgt. Pierson to highlight enemies on the battlefield. These special abilities are tied to meters on the right side of the screen which slowly fill as you defeat enemies. Besides these two fundamental changes, the campaign has a few vehicle-based sequences and some set piece moments, but few manage to impress. Everything feels retread and uninspired, and although the act of shooting nazis is still fun, everything else surrounding it is mediocre.

The Beauty of Battle

Call of Duty: WWII does win some points in the visuals department, but just as quickly loses them due to technical hiccups and odd textures. The campaign is the main offender of visual and performance issues, which is surprising. The multiplayer modes such as competitive online and Nazi Zombies looked great and rarely saw issues, whereas the campaign mode was an utter mess. 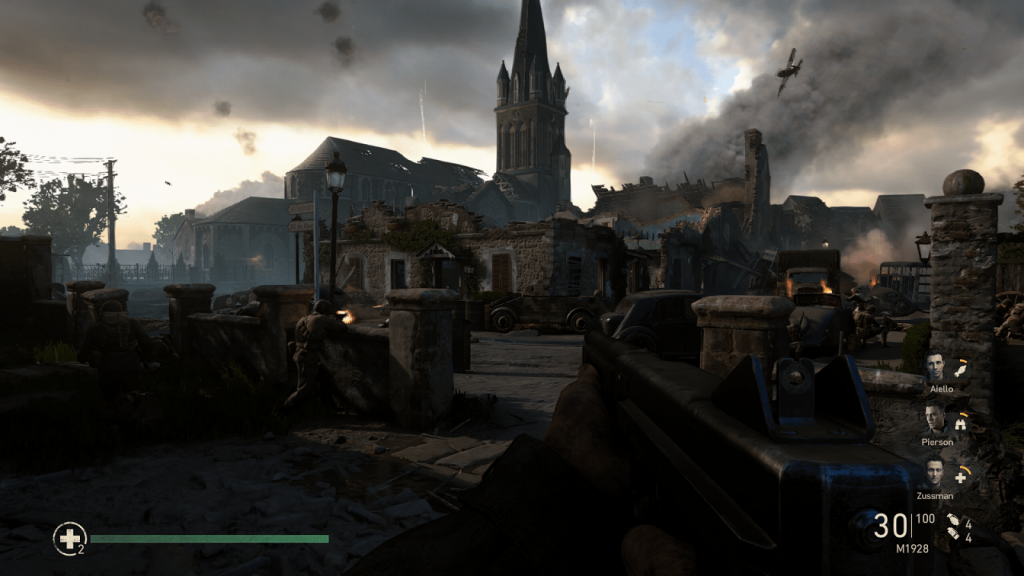 The environments look great, as do environmental effects such as weather. It’s a game that looks good in motion, but surprisingly shoddy upon a closer look. Explosion effects can look pixelated and two dimensional, everything is drenched in motion blur, and occasional visual glitches only worsen things. There’s also a visual stutter that happens consistently, popping up when you pass checkpoints, get new objectives, or when enemies spawn in. Your mileage may vary depending on console of choice (and whether or not you’re using a PS4 Pro, Xbox One X, etc), but generally speaking, the campaign’s visuals leave a bit to be desired.

The online offerings of Call of Duty: WWII are just as varied as before, providing a robust selection of modes and unlockables. There’s been a few changes to the formula, but these are mostly cosmetic. The most notable difference is the inclusion of “Headquarters”, a social space similar to Destiny‘s “Tower”. In this virtual lobby, you can participate in a variety of activities while waiting in multiplayer queues. There’s a 1v1 arena, two different firing ranges, and even a collection of Atari 2600 games to play. Although this is chronologically wrong, and even a bit inappropriate, the inclusion of Activision’s classics is a nice nod and a creative feature. 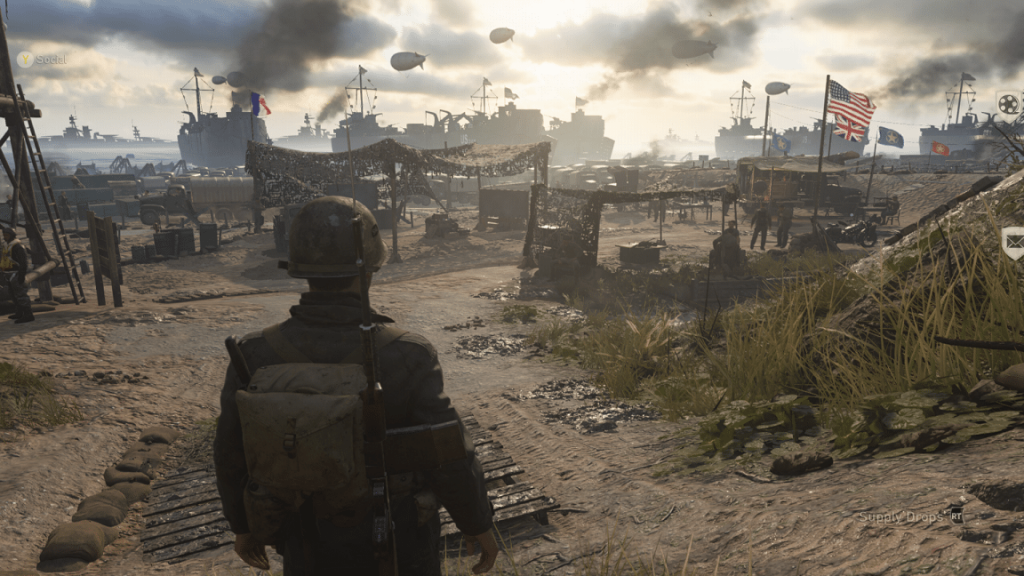 As far as actual modes, all the Call of Duty staples are here. In addition to time-sensitive and event playlists, all the modes you expect are available. Team Deathmatch, Domination, Search and Destroy, Kill Confirmed, Gridiron, Hardpoint, Capture the Flag, Free-for-All, and War make up the collection. You can also hop into “hardcore” variants of these modes, made with the tactical player in mind. I enjoyed most of my time in Call of Duty: WWII‘s multiplayer, progressing to level 40 before feeling comfortable with my opinion. Although I prefer more hectic modes like Free-for-All and Gun Game (a mode that is not included in WWII, to my disappointment), I found my new favorite mode to be War. 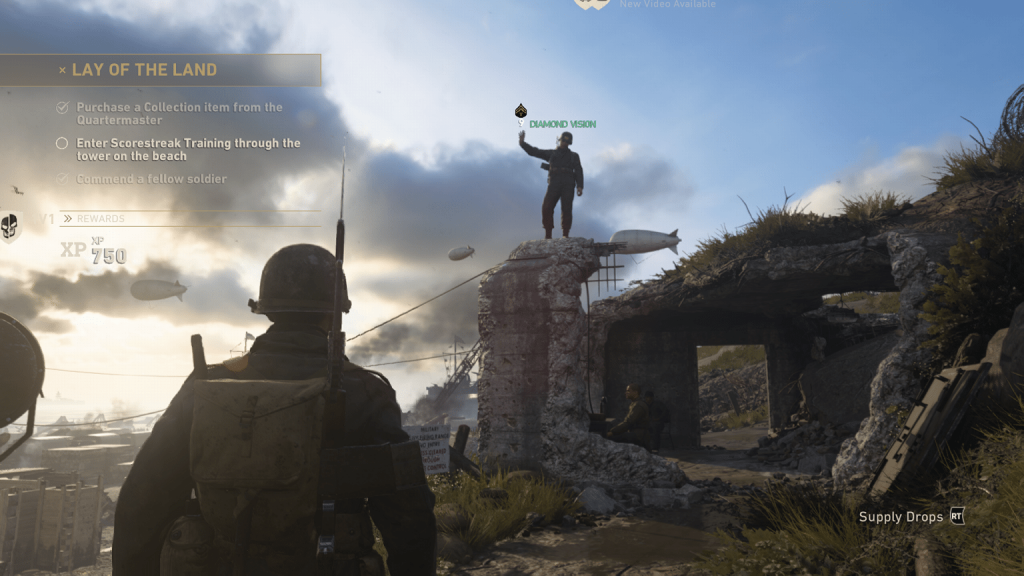 Although not as replayable as more traditional modes, War is still massively fun. Split into a defending team and an offensive team, players battle through unique missions, attempting to progress further than the opposite team. My favorite of these missions was “Operation Neptune”, which starts with attacking players storming Normandy Beach and defending players firing at them with machine guns. Normally, I play with submachine guns and like to get up close and personal. This kind of objective play made it fun to sit back with sniper rifles and try out new things, and I commend the mode for being able to change up my preferences. 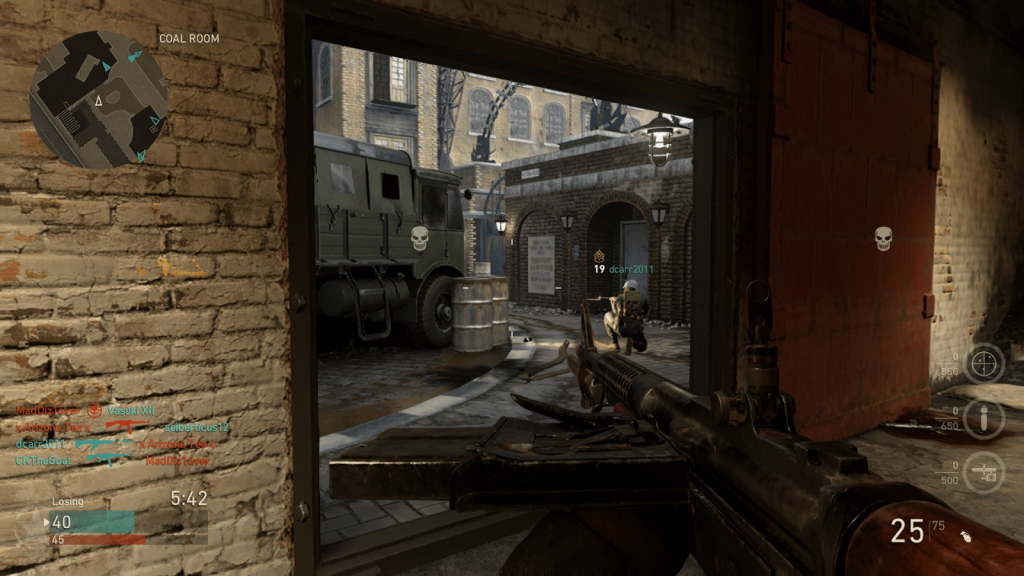 The Dead Have Arisen

If there’s one thing that Call of Duty is known for, it’s Nazi Zombies. This mode has been reimagined and repurposed numerous times to fit each new iteration, and WWII‘s version is no different. This time around, Nazi Zombies is a much different mode than what we’ve grown used to. It’s still a four player cooperative battle against waves of zombies, but it’s finally evolved into something else entirely. Before, Zombies modes would have secret objectives, easter eggs, and general progression that you would have to figure out over time. As Zombies modes got more and more complex, these objectives did too. Now, Nazi Zombies shows these objectives clear as day, pointing you towards the next point of interest. 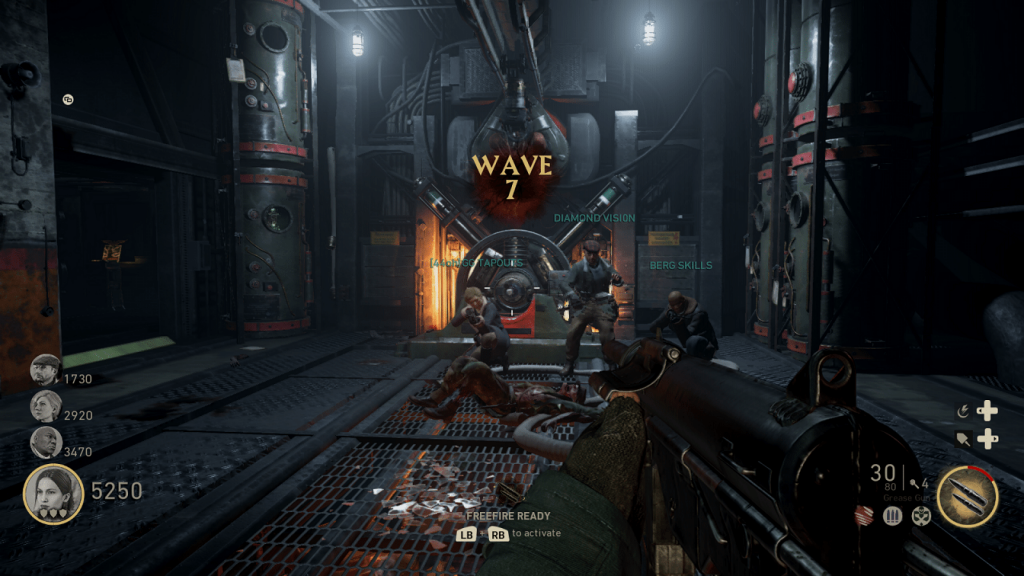 This will be a divisive factor for Zombies fans. Many players enjoyed figuring out each map’s secrets, progressing slowly over time. This new version of Zombies requires little to no guesswork, which takes a bit of the mystery out of everything. Alternatively, this opens up the more enjoyable aspects of Zombies to newer players. The complexity of the mode hasn’t been removed, but the shroud of mystery surrounding it has. All things told, I actually enjoyed my time in Zombies mode more than the campaign.

The Bottom Line on Call of Duty: WWII

Call of Duty: WWII returns to the franchise’s roots, but the results are mixed. The campaign is a messy mixture of somewhat effective moments and retread storytelling. Some lines feel pulled directly from Saving Private Ryan, as do the characters and the events they encounter. The campaign runs around 5 hours, with roughly 3 hours of actual gameplay. All around uninspired and lacking any feeling, it only feels entertaining a handful of times.

The multiplayer is enjoyable, especially the new War mode with unique objectives and gameplay. These large scale battles are equaled out by good ol’ fashion Call of Duty modes like Team Deathmatch and Search & Destroy, which are fun to play for hours on end. As someone who has played nearly every Call of Duty competitively in some nature, I began to get burned out around Level 40. It’s a game that I can see myself returning to, but in comparison to past Call of Duty entries, it may not have the legs to carry its audience until the next release. Finally, Nazi Zombies is the mode most changed, but it works. Fun to play and even better with friends, Nazi Zombies is a guided challenge that’s both creepy and exciting. More fun than the campaign itself, I look forward to additional Zombies content in the future.

Call of Duty: WWII shows up for the party, but doesn’t bring much life to it. If you’re a die-hard fan of the franchise, you’ll enjoy the multiplayer (and maybe Zombies) but that’s probably about it.  I enjoyed Nazi Zombies and got a dozen hours of enjoyment out of competitive play, but that eventually grew tiresome.  In the end, Call of Duty: WWII is an inconsistent package that’s occasionally entertaining but ultimately disappointing.  It’s not a failure, but it doesn’t do enough to stand out in a packed year of excellent experiences. 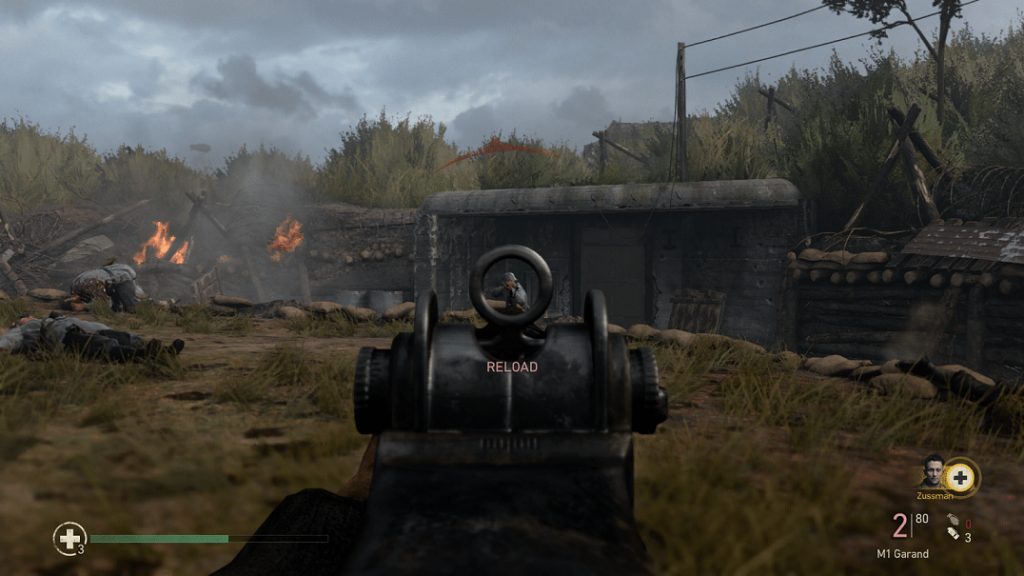 Note: This game was reviewed on an Xbox One S and an original Xbox One.