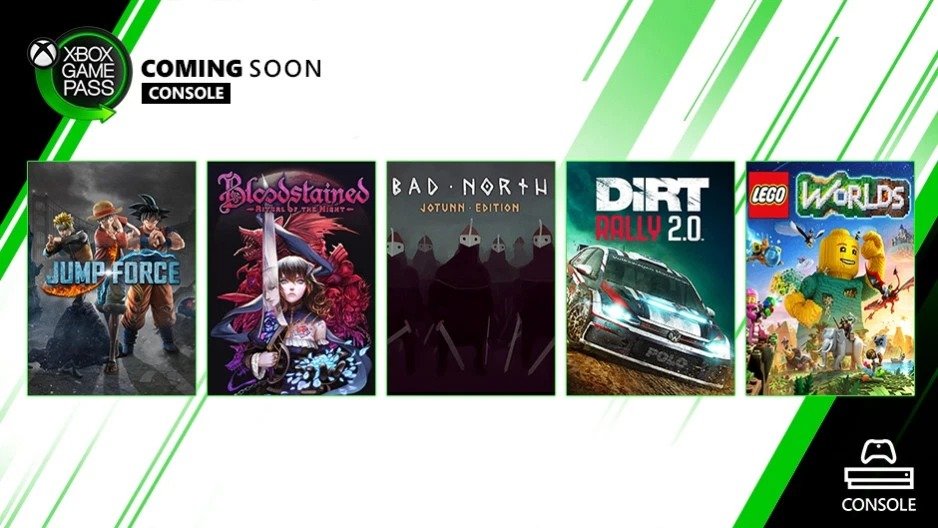 The crew at Xbox Game Pass are excited to announce that five more titles will be added soon. They include Jump Force, Bloodstained: Ritual of the Night, Bad North, DiRT Rally 2.o and Lego Worlds. They have also said that games for Xbox Games Pass for PC are “coming soon”. You can follow a dedicated Twitter account for PC titles here for updates.

Jump Force, Bloodstained: Ritual of the Night, Bad North and DiRT Rally 2.0 are all Xbox One X Enhanced.

Two of the games will be out this week and the rest out next week.

This is a great list so props to Xbox Game Pass! If you need to find out what these titles are all about, here are the descriptions for each.

For the first time ever, the most famous Manga heroes are thrown into a whole new battleground: our world. Uniting to fight the most dangerous threat, the Jump Force will bear the fate of the entire human kind.

Bloodstained: Ritual of the Night – Xbox One X Enhanced

You are Miriam, an orphan scarred by an alchemist curse which slowly crystallizes your skin. You must battle your way through a demon-filled castle summoned by Gebel, your old friend whose body has become more crystal than flesh.

Bad North is a charming but brutal real-time tactics roguelite. Defend your idyllic island kingdom against a horde of Viking invaders, as you lead the desperate exodus of your people. Command your loyal subjects to take full tactical advantage of the unique shape of each island.

Everything is at stake: fail, and watch the blood of your subjects stain the ground red.

DiRT Rally 2.0 dares you to carve your way through a selection of iconic rally locations from across the globe, in the most powerful off-road vehicles ever made, knowing that the smallest mistake could end your stage. You will need to rely on your instincts with the most immersive and truly focused off-road experience yet, including a new authentic handling model, tyre choice and surface deformation.

LEGO Worlds is an open environment of procedurally-generated Worlds made entirely of LEGO bricks which you can freely manipulate and dynamically populate with LEGO models. Create anything you can imagine one brick at a time, or use large-scale landscaping tools to create vast mountain ranges and dot your world with tropical islands. Drop in prefabricated structures to build and customize any world to your liking. Explore using helicopters, dragons, motorbikes or even gorillas and unlock treasures that enhance your gameplay. Watch your creations come to life through characters and creatures that interact with you and each other in unexpected ways. In LEGO Worlds, anything is possible!

We’ll keep you up to date with any other announcements. In the meantime, you can check out our full review of River City Girls. No pressure though.