Wulverblade is a side-scrolling old-school style arcade game, developed in 2013 by Darkwind Media. The game is set in AD 120 as the Roman Empire attempts to advance north of Britannia and into Caledonia to expand the Northern Frontier. At its core, Wulverblade is an attempt to resurrect arcade style side scrolling games in modern consoles, whilst also incorporating an interesting historical setting which only adds to its charm.

Wulverblade’s main campaign mode follows the 9th legion invasion of Britannia during the reign of the Roman emperor Hadrian during the major rebellion in Britain that lasted from AD 119 until 121. Considering how many games there are that claim to use historical events as a basis for their story and manage to get absolutely nothing right, I have to admit I did expect the worst. However, as a classical historian (in training), I was actually pleasantly surprised by the historical accuracy and context that the development team managed to provide through subtle artistic choices and added bonuses.

To provide further context, the emperor Hadrian constructed his famous wall in AD 122. This has been interpreted as a direct answer to the multiple rebellions that frequently sprang up in ancient Britain, as the locals weren’t too happy with being conquered by a foreign invader. A second wall was also constructed in Scotland by the emperor Antonine in AD 142 in another attempt to conquer Caledonia. Ancient Scotland was never fully conquered unlike England and Wales, so Caledonia is a nice setting for a heroic fight of the underdogs vs the aggressors. 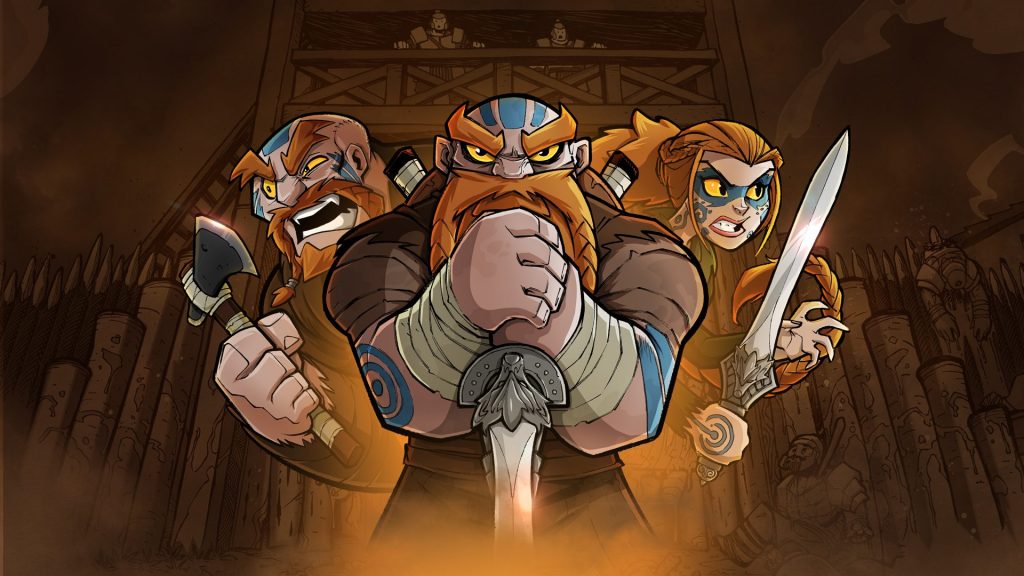 The main character in Wulverblade is Caradoc, a Caledonian warrior who attempts to unite the people of Caledonia against the Romans and their allied tribes. Although he is advertised as the main character, Caradoc is actually one of three playable characters in the main campaign. Each character has their own fighting style and stats, with Caradoc being the most well rounded character build. There’s also a tank build, a character named Brennus who is Caradoc’s brother, and a speed and mobility build, a female warrior named Guinevere who is also Caradoc’s sister.

The attention to historical detail is evident in Wulverblade, and it’s clear that the development team went to great lengths to incorporate that research into the game without forcing it down the player’s throat. The development team at Darkwind Media posted a blog entry in February last year addressing the fact that the game includes a playable female warrior. The development team reveal that they want to strive for historical accuracy as far as possible in Wulverblade, which is why the game features not only a playable female character, but also multiple different Britannic female warriors that the game tasks the player with fighting. Wulverblade definitely won some points from me with their equality message both as a female gamer and as someone who values historical accuracy in their video games. 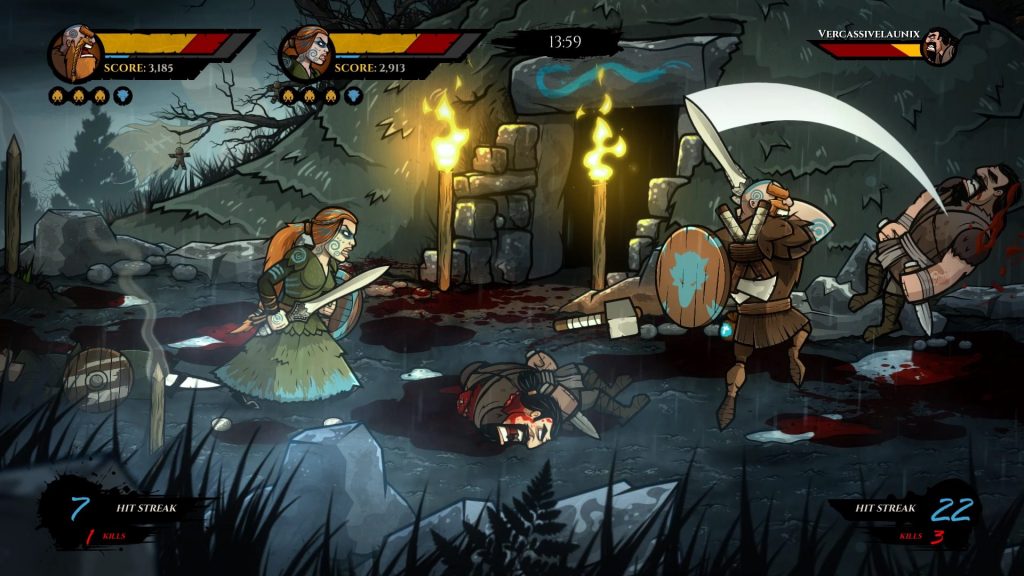 In addition to their accurate representation of warriors in Caledonia, the game also claims to have focused on historical accuracy by incorporating real locations from Roman Britain. Historic figures have also been incorporated into the main campaign of Wulverblade, and the developers visited the archaeological sites of Roman Britain to understand both the architecture, and to capture sounds and feelings of the environment. Secret unlockable documents can be found throughout the main campaign as well, which I thought was a nice way of including more of their own research into the game through optional Easter eggs. Although Wulverblade is fairly limited in its ability to achieve education through fighting, the gameplay offers a novel way to teach gamers who are interested in learning a bit more about the Roman conquest of Britain.

The game is currently out on the Nintendo Switch, and will be available on Xbox One, Playstation 4, and Steam in Autumn 2017, however no official release date has been announced as of yet. Given that Wulverblade is essentially a side scrolling arcade game, I think it definitely suits the portable nature of the Switch more so than a console or a computer. The full campaign can also be played with another player in couch co-op mode, meaning you can utilise the multiple fighting types in a more obvious way than single player.

In addition to different fighting abilities, Wulverblade also allows the player to use multiple weapons and finishing moves. Weapons such as spears, throwing knives, or daggers can be picked up from fallen enemies and used for a limited time. The game also allows for combos with some rather satisfying finishers, such as head butting an enemy repeatedly until they either die or lose consciousness. There is no tutorial in the game, meaning players have to learn as they go, which does have its perks as well as its pratfalls. I frequently found I would accidentally execute combos and not be able to replicate them until much later in the game when I figured them out. It also took me a lot longer than I care to admit to realise that you can heal yourself by interacting with food in the environment. 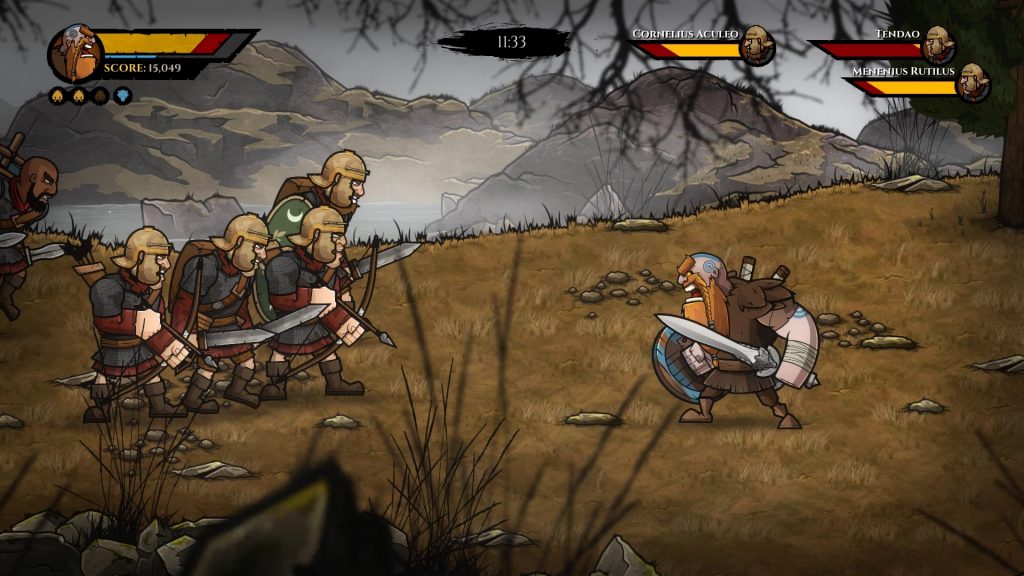 Keeping with the style of arcade games, Wulverblade doesn’t have a proper save system. Progress is saved by reaching certain checkpoints or finishing the level. While this can be frustrating if you die after fighting through hordes of enemies just short of a checkpoint, I found that it added to the overall charm of the game since it clearly harkens back to a different era of gaming rarely encountered in 2017.

Over all I very much enjoyed playing Wulverblade. Since each level takes on average 10-20 minutes to complete, it’s an excellent game to play on the go or during commutes since it’s so easy to put down and pick up again. I felt that although I enjoyed the game, I preferred to play it in bursts rather than for hours at a time since the repetitive formula got a bit stale after hours of playing. It does suffer as an arcade game because of its limited gameplay, but with plenty of unlockables and game modes there’s always something to come back to later. I’m not sure how it will fair when ported on PC or larger consoles, but for the Switch it fits into my game library very nicely.