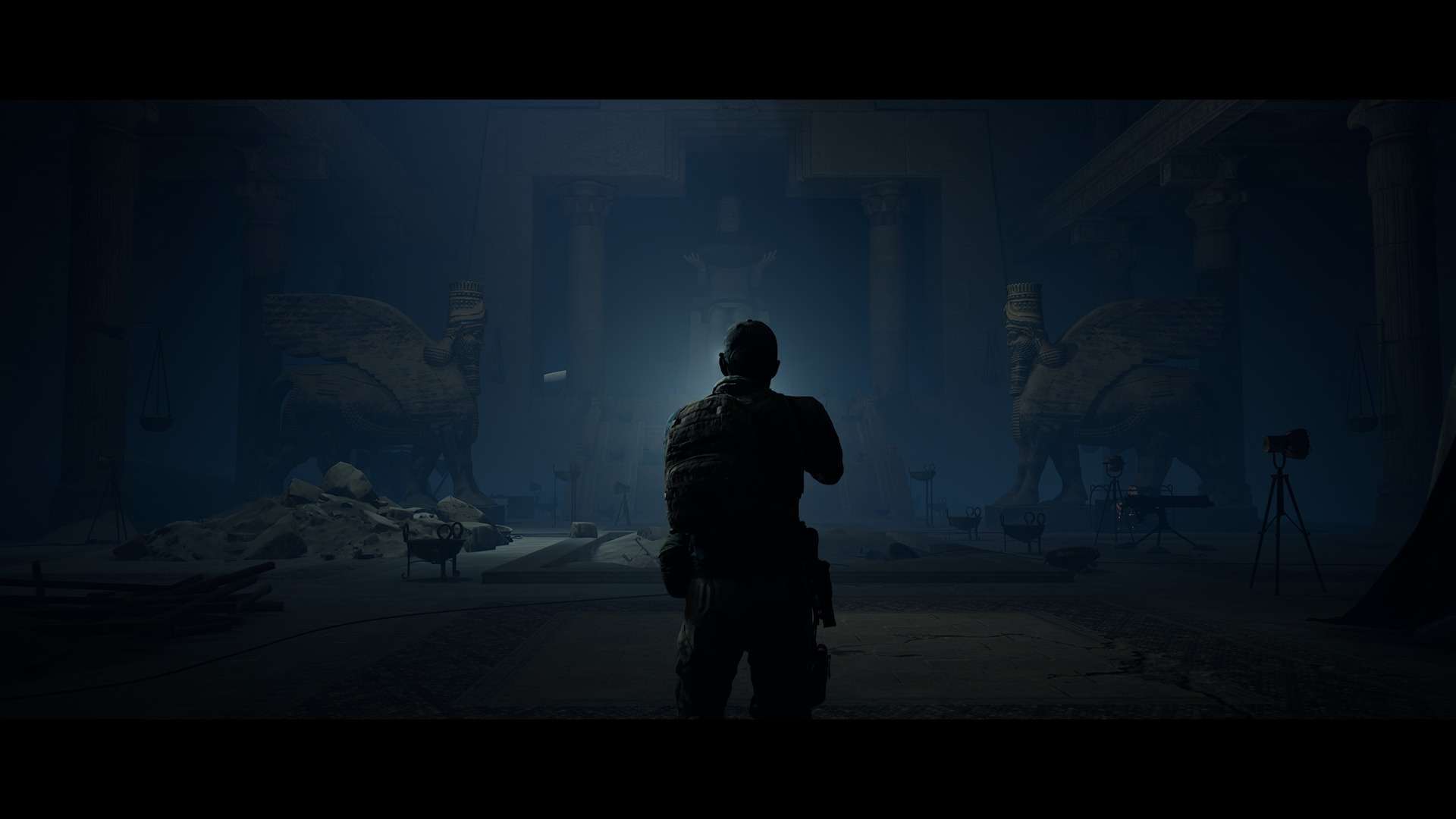 The Dark Pictures Anthology: House of Ashes is the third entry in Supermassive Games‘ supernatural horror series and is the penultimate game in the first season of the franchise. Following the release of the previous game, The Dark Pictures Anthology: Little Hope, House of Ashes tells a tale of betrayal and war, founded in ancient history but presented through a modern story of military conflict in the Middle East. Published by Bandai Namco, this creepy creature future is playable either solo or with a group of friends, encouraging players to venture forward alone or gather their friends for an interactive movie night. While it still employs the classic jump-scare tactic for most of its frights, House of Ashes tells a more layered narrative than any of the previous games, with an interesting cast of characters to boot. That said, is The Dark Pictures Anthology: House of Ashes a terrifying trip worth undertaking or a passive bore that misapplies its concepts? Let’s find out how well this latest horror story in Supermassive’s flagship anthology performs!

House of Ashes is set in 2003 during the Iraq War, as a diverse group of military personnel set out on a recon mission in the northern Zagros Mountains. Setting up at an old palace previously occupied by the oppressive president of Iraq, Saddam Hussein. After discovering an underground bunker via satellite that may hold weapons of mass destruction, the team gears up for a dangerous mission into enemy territory. Led by the overbearing but level-headed Colonel Eric King, the group is composed of a variety of talented intelligence agents and highly-trained soldiers, including Eric’s estranged wife Rachel King (played by Ashley Tisdale), her current lover and special forces Marine Nick Kay, as well as the All-American Lieutenant Jason Kolcheck. Rounding out the squad is technician and loud-mouth Corporal Nathan Merwin, the intelligent but dismissive Dr. Clarice Stokes, and the jovial Lance Corporal Joey Gomez.

Predictably, their mission goes sideways, as tremors erupt around the secluded shepherding village above the assumed weapons bunker. As enemy forces attack and firefights break loose, key members of the squad are swallowed up by sinkholes, sending them spiraling deep underground. Separated, disheveled, and in various states of injury, the squad finds themselves trapped in the ruins of an ancient temple, with no direct way back to the surface. In the frenzy, multiple Iraqi soldiers are also sucked into the ramshackle temple remains, including Captain Dar Basri and Lieutenant Salim Othman. As the sandy caverns continue to descend into inky blackness, the survivors must delve deeper to survive, coming face to face with a primordial evil that pursues them from the shadows.

While the game’s story takes some time to gain steam, House of Ashes has lots of surprises in store, becoming intriguingly unpredictable in its latter half. The game’s prologue sequence, set in the ancient Mesopotamian city of Akkadia in the year 2231 BC, does a great job setting the stage for the game’s mystical undertones. The main cast of characters is adequate, with some lacking dimension and others being trapped in a superfluous love triangle sub-plot. Some great moments between Jason and Salim make them standouts in my opinion, but everyone will have their personal favorites. Apart from some pacing issues and a few dud characters, House of Ashes has the strongest plot in the series so far.

Like Little Hope and many of Supermassive’s games before it, House of Ashes is a third-person cinematic adventure that mostly involves exploring areas, making choices during scenes of conversation, and dodging dangers along the way. Whether you’re evading a booby trap or fighting against supernatural baddies, many moments of action play out with quick-time events, requiring you to press or mash a button before time runs out. Given the military background of most characters, there are more instances of combat and firefights than in previous games, but these are still contained to brief bursts of action. Don’t expect to be blasting down monsters while you reload your side-arm, as House of Ashes just isn’t that kind of game.

As expected, the game’s main selling point is its branching narrative, which changes as you make decisions throughout the story. Most of your choices can drastically change the outcome of the plot, whether it’s a simple dialogue option with unexpected consequences or failing a deadly quick-time event. If your actions result in the death of any characters, they’ll remain dead, with their story ending until your next playthrough. Fortunately, there are several accessibility options that make tougher sections more palpable for lesser-experienced players, including toggles that change button mashing to button holds or remove time constraints. There are also three difficulty levels to choose from, including Forgiving, Challenging, and Lethal. These different difficulties offer more lenient or demanding timing for quick-time events, so you can set your expectations from the start.

While the majority of the gameplay is remarkably similar to previous entries in the anthology, there are a few new mechanics that shake up the experience. For example, the camera is no longer in a fixed position, giving you full control to better search for the game’s 50 discoverable secrets. This works for the most part, but some sections can feel cramped, with the camera floating far too close to the character model. These moments are infrequent, but when it happens, it’s hard to ignore. Every character also has a light source that can be triggered on or off, whether it’s a gun-mounted flashlight or a puny cigarette lighter. This is very helpful, as the sunless mountain caves are often pitch-black and treacherous to navigate.

The Darkest Picture Yet

When compared to the rest of the series, House of Ashes is arguably the least frightening of them all, featuring only a few jump-scares or moments of grotesque gore. However, it succeeds by providing an anxious experience full of tension and claustrophobia. Instead of bombarding you with loud noises or cheap scares, House of Ashes slowly builds up a thick atmosphere of dread, where you’re never sure what’s coming next. The main monsters that threaten your livelihood are effective at stalking their prey, leaping from the shadows at any point, leaving very little time to relax.

Ultimately, House of Ashes is far more experimental in its inspiration, execution, and themes, feeling more like a psychological thriller than a traditional horror game. The creatures are disturbing and the feeling of danger is ever-present, but there are far more quiet moments of anxiety than explosive sequences of terror. This puts a bigger emphasis on the plot and unraveling mystery, rather than succumbing to an experience that feels like an interactive haunted house. That said, you can still expect to leap out of your seat once or twice, but the most unsettling parts are the downtime between scares, where you cautiously await the next burst of fright.

The Bottom Line on The Dark Pictures Anthology: House of Ashes

Overall, The Dark Pictures Anthology: House of Ashes offers an engaging and spooky story that should take you anywhere from 8 – 10 hours to finish. Depending on how well you fare and how many collectibles you find, you might be compelled to return for a second playthrough, but I was satisfied after my first trip through the caves. By foregoing the easy but underwhelming jump-scares of past entries in favor of a more subdued and suspenseful tone, House of Ashes overtakes its predecessors in the story department.

If you enjoy horror games or supernatural stories with multiple plot twists, you’ll likely get your money’s worth out of House of Ashes. It’s enjoyable enough as a solo adventure, but playing with friends provides a fun and unique experience you won’t find in many other games. Unless you want to find every collectible and witness all the endings, House of Ashes can be finished over the course of a weekend. While not every aspect of the game is stellar and occasional visual glitches can break immersion, we still recommend checking it out. If anything, we’re looking forward to the fourth and final entry in the anthology and hope that it elevates this entertaining horror series to the next level.