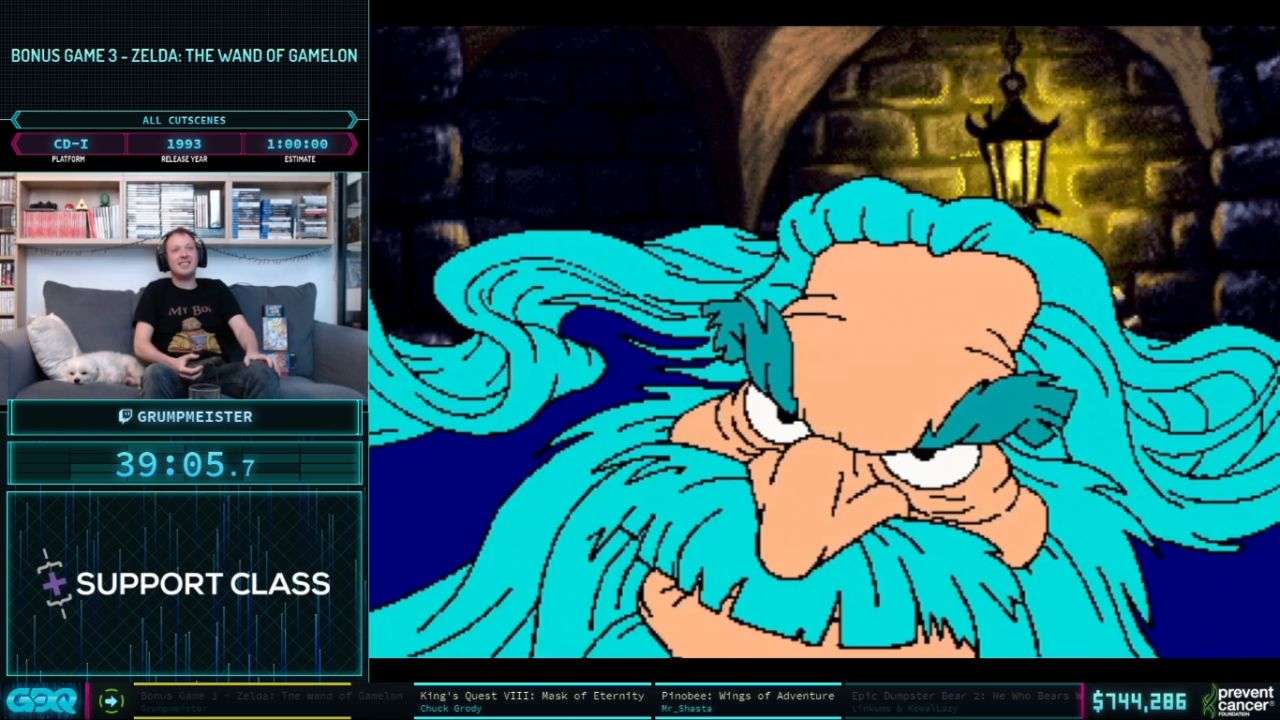 Day five of AGDQ 2021 was 24 hours chock-full of lightning-quick reflexes, hilariously bad games, and some of the best speedruns of the marathon so far. The first half of the day was dominated by the “Awful Games” block, where speedrunners dashed through horrendous titles in the blink of an eye. A handful of longer runs made up the latter half of the day, with some fun Nintendo speedruns as well as a few popular first-person shooters. As always, this week-long marathon has been a pleasure to watch, and we’ve been excited to check out each and every new speedrun. We’ve whipped up a list of the best speedruns of AGDQ 2021 day five, so if you are looking for somewhere to start watching, any of these picks should suffice.

If you want to watch any of these speedruns, you can find the replays on Games Done Quick’s Twitch channel or their YouTube channel. If you’re reading this during the time of the marathon, we also encourage you to check out the live stream and join the fun. GDQ is a great way to spend a weekend relaxing and watching some entertaining gameplay, which is exactly what we’ll be doing. While the weekend will likely yield some awesome moments, here are our picks for the best speedruns of AGDQ 2021 day five!

The Entire Awful Games Block by many runners

The “Awful Games Done Quick” block is an AGDQ tradition where, for a sizable chunk of the morning, runners beat their favorite terrible games in record times. For AGDQ 2021 day five, the Awful Games block lasted for around 9 hours, starting at 1AM and carrying the stream until approximately 10AM. There were a smattering of hilariously bad games, including an “All Cutscenes” category run of The Legend of Zelda: Wand of Gamelon, an epic race of an awkward platformer called Epic Dumpster Bear 2, and much more. Not only did we get some incredibly janky and funny runs this year, but there was also another new world record, earned by runner Faust4712 in the Shinobi Legends run. This block of bad games is always a treat, but the AGDQ 2021 Awful Games block was particularly fantastic. We suggest you load up the very first run, sit back, and enjoy the entertainment.

Next to Wind Waker, The Legend of Zelda: Link’s Awakening is the oddest of the Zelda series. This classic handheld adventure sets our protagonist on a tropical island, packed with characters from other Nintendo games, weird enemies, and familiar dungeons to explore. Runner pulled off an excellent “100%” category run, showing off a wide array of glitches that are tough to execute and awesome to watch. Since there are some restrictions on using certain glitches in this category, the speedrun is a nice combination of great gameplay and fun tricks, without things getting too broken or cheap. This comfy run is a great watch with some positive vibes, and an even better watch if you played the recent Link’s Awakening remake on Switch. The pixel-art is adorable, too.

Despite encountering a few technical issues, SasquatchSensei delivered a great run of the iconic FPS Halo 3. Playing on Easy difficulty, SasquathSensei used a variety of movement tricks, grenade and bomb boosts, and deadly precision to battle his way through the hordes of invading alien forces. While this run had plenty of glitchy tricks and skips, there was also plenty of impressive FPS skill, with Sasquatch earning tons of multi-kills and quick headshots. Even if you’ve played Halo 3 a dozen times, this speedrun will undoubtedly introduce you to some strategies you’ve never seen before. Seeing as how Halo 3 is one of my favorite FPS games ever made, this run filled me with nostalgic vibes of playing on Xbox Live with my pals. If you share a similar love for Halo, this speedrun will have you glued to the screen.

Half-Life was a game that defined the FPS genre at the turn of the century, so it’s only fitting that the speedrun would be as popular as it is. Infinitely optimized and improved, Half-Life speedruns were popular long before GDQ marathons or streaming, and they’re just as exciting now as they were then. The current world-record holder, Muty, gave us a hell of a show, with incredibly precise movement, shooting, and some impressive glitches to boot. Utilizing a mixture of quick tricks like bunny-hopping, Musty zipped his way through the many halls of the Black Mesa Research Facility, eliminating inter-dimensional baddies in a breeze. You don’t have to know much about Half-Life to find this run entertaining. It’s just pure speed with a flair of supernatural style.

Star Wars Jedi: Fallen Order (Any% No PBC) by Pnash

Jedi: Fallen Order takes the Star Wars world and injects a bit of Dark Souls gameplay, offering a challenging but flashy action experience. While the combat is heavily inspired by Souls games, there’s plenty of platforming, puzzles, and action that requires significant use of the force. Runner Pnash uses that to his advantage in this awesome Any% run, skipping around planets while slicing down bosses and baddies with ease. Although the run is heavy on unskippable cutscenes, the informative commentary keeps things from getting dull, with great explanations of the various tricks and optimizations. There are some fun sequence breaks, exciting combat, and plenty of chuckle-worthy moments, making this run a Star Wars experience worth your time.

Those are our picks for the best speedruns of AGDQ 2021 day five! Once again, this list is purely subjective and does not cover every speedrun from the day. With so many hours of entertainment, it’s impossible to catch it all, so we’re simply offering some suggestions on the runs we enjoyed the most. It seems like the viewers of AGDQ 2021 are loving the runs too, as the marathon managed to raise over $1,000,000 for the Prevent Cancer Foundation. by the end of the day. With the weekend right around the corner, I expect to see another million added to that total in no time.

If you’re watching AGDQ 2021 live, be sure to stop by our Twitter page (@official90skid), where we’re geeking out over the marathon all week long! You can also check out our articles on the other days of AGDQ 2021. If you think we missed a particularly cool run, please let us know in the comments. Enjoy the rest of the marathon!