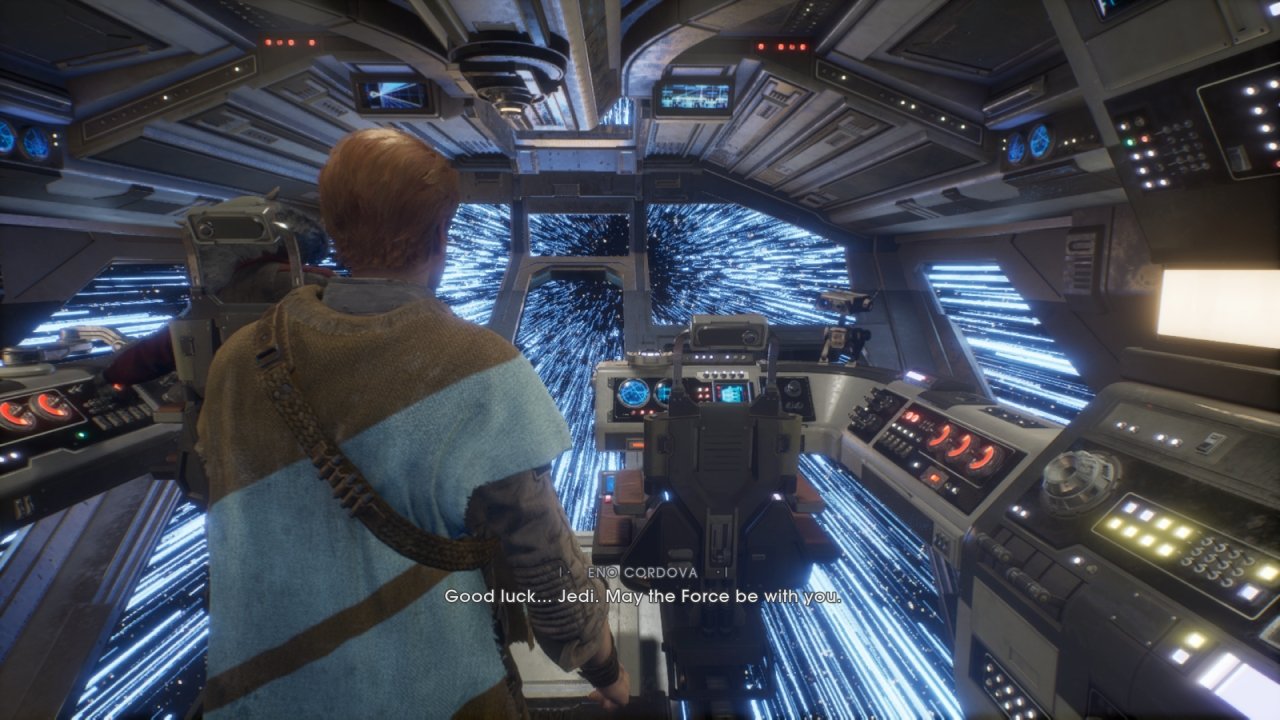 In Fallen Order you play as Cal, a scruffy but likable guy working in a massive scrapyard. After a run-in with the Empire and a rekindling of some dormant Force powers, Cal quickly finds himself on a path to Jedi greatness. Aiming to reform the fallen Jedi Order (hence the name), Cal travels from planet to planet, increasing his connection to the force and uncovering ancient Jedi secrets.

Along the way, Cal meets a handful of characters, representing a decent variety of Star Wars lore. His shipmates, Cere and Greez, are down on their luck but find rejuvenated motivation in the raw talent that Cal exudes. The Dark Side gets some strong characters as well, with a masked villain named the Ninth Sister and her gang of sadistic Inquisitors providing ample antagonistic force. There are several other characters you’ll bump into, including a handful of film-character cameos that I won’t spoil. While not every story arc or plot twist is memorable, I was pleasantly surprised by the voice-work and character development that was present.

Generally speaking, Star Wars Jedi: Fallen Order is at its best when it loosens up the storytelling and lets the characters breathe. The overarching story of the resurrection of the Jedi Order is all well and fine, but I often found my motivation to proceed more based on Cal’s personal journey. I had a great time watching Cal grow from a relatively naive scrapper into the Jedi hero he was meant to be. Some problems arise in the pacing department, with some sections of the story feeling dragged out and empty. It also has the tendency to be more bombastic than necessary, but this is more a problem with modern action games than it is Fallen Order in specific. Overall, the narrative is passable if a bit weak at times. Luckily, most of my problems with the narrative were lessened by the fun and believable characters.

The Dark Side of the Souls

The gameplay in Star Wars Jedi: Fallen Order is very obviously influenced by several popular action franchises, with the combat feeling reminiscent of games like Bloodborne and Sekiro. Using your lightsaber, you’ll engage in challenging fights with stormtroopers and alien species alike. Health is precious, and can only be replenished by using a limited number of “health stims” between checkpoints. Massive boss fights punctuate areas and story sections, resulting in epic battles between other Force-users and giant cosmic creatures.

Various force powers can also be unlocked as you progress, including force push, force pull, force slow, and more. Combat requires some strategy, including parrying attacks and managing your health at all times. If you’re not careful, even the simplest of enemies can kill you, though the game offers easier difficulty levels for those who struggle with the combat.

Saving and upgrading is also similar to games like Bloodborne and Dark Souls, requiring players to find meditation checkpoints before catching their breath. While meditating, you can unlock various abilities with the skill points you earn via combat and exploration. These abilities buff your health and force powers, while also adding new lightsaber moves to your arsenal. You can also choose to rest at meditation spots, refilling your health bar and reserve health stims. Resting causes all enemies to respawn though, so sometimes it’s best to bypass the healing.

When you’re not slicing alien creatures in half with your lightsaber or deflecting blaster shots from stormtroopers, you’ll spend time exploring the environments of the various planets you land on. The story always guides you on a fairly linear path, but levels are designed with multiple pathways and side-areas to explore. Some areas can only be accessed once you find the correct upgrade, and there are various collectibles and item chests to discover and loot.

The map system in Jedi: Fallen Order is exceptional, represented as a hologram that fills in as you explore. The map is also good for path-finding, indicating unexplored areas as well as both locked and newly accessible doorways. Despite the superb map, I still found myself getting turned around and confused from time to time. Fallen Order doesn’t do the best job indicating what cracks and crevices can be crawled through, making some areas seem like dead ends at first glance. The lack of a fast-travel system between meditation checkpoints also forces you to backtrack through some very large areas, which can be harder to navigate backward than you might think.

That lack of clarity is due in part to the cinematic and “set-piece moment” attitude that fuels a majority of the exploration and adventuring. While the combat feels like Bloodborne-lite, the traversal and exploration feel more akin to the Uncharted series and modern Tomb Raider games. You’ll climb up sections of walls, swing from ropes, and complete your fair share of platforming. Fallen Order often bounces back and forth between areas of combat and puzzles, providing a decent variety of gameplay. At its best, Fallen Order can be reminiscent of games like Ocarina of Time, with clever temple-like dungeons filled with physics puzzles and new upgrades. At its worst, it feels like a watered-down version of Rise of the Tomb Raider.

My BD and Me

Early on, Cal comes in contact with a small BD-1 utility droid. This handy fella does a lot more than act cute; it serves as your map, guide, and companion. Additionally, BD- 1 can scan new enemies after you defeat them, unlocking helpful codex entries with strategies and tips. BD-1 mostly serves as a multi-tool that doubles as a fun side-kick, providing some fun and charming moments in the story.

As you progress through the game, BD-1 can also acquire upgrades that open up new pathways. Certain chests and doors can only be opened once you find the right equipment for the droid, adding a bit of back-tracking into the mix. All said, BD-1’s skills don’t make a massive impact in combat, but he becomes invaluable for exploration as time goes on.

A Disturbance in the Force

For as many points as Fallen Order gains for its engaging combat and fun world design, it loses just as many for technical issues. I couldn’t go one play session without encountering some sort of bug, be it visual glitches, texture pop-in, or any other slew of weird issue. Although they rarely impacted gameplay directly, the performance problems in Fallen Order leave a lasting impression that signals a lack of polish.

I often encountered muddy textures that took long times to load, which was especially noticeable as I backtracked through areas quickly. I occasionally stumbled upon t-posing enemies, as well as enemies that would fall through the environment as if there was no floor beneath them. Some objects lack proper collision as well, allowing me to completely clip through pieces of the environment and fall through the floor.

Jedi: Fallen Order does its best to maintain a solid frame rate during action sequences, but occasionally crumbles under the graphical stress. If you’re playing on an original PlayStation 4 or Xbox One, you’ll certainly experience these slowdowns. Your experience may vary depending platform of choice, but my experience was still marred with performance problems. The visual bugs, lack of polish, and technical hiccups consistently occurred during my playthrough, leaving a stain on the otherwise solid environmental design.

If you’ve been eagerly awaiting a solid single-player Star Wars title that doesn’t begin with the word “LEGO”, Jedi: Fallen Order will most likely satisfy those cravings. Cal is a strong protagonist with an interesting story of growth and acceptance, which is mirrored well in the various sub-plots and secondary characters. Although pacing can become an issue in both storytelling and gameplay, the majority of Fallen Order feels worthwhile and entertaining. A fusion of challenging combat, platforming, and exploration makes the experience feel well-rounded and sufficient in variety.

Unfortunately, it’s far from a flawless game, with technical and performance issues around every turn. Various glitches constantly popped up during my playthrough, occasionally disrupting gameplay and indicating a lack of polish. The visuals range from great to incredibly lackluster, especially depending on which platform you play the game on.

Despite these persistent issues, I found Fallen Order to be an entertaining side-story in the Star Wars universe, and a good step in the right direction for Star Wars video games in general. There’s at least 15 – 20 hours of content to enjoy, with several more hours of fun for those who seek 100% completion. When stacked up to some of the games it takes inspiration from, Jedi: Fallen Order pales in comparison. That said, it’s still plenty of fun, packed with explosive action, and filled to the brim with Star Wars lore and world-building.