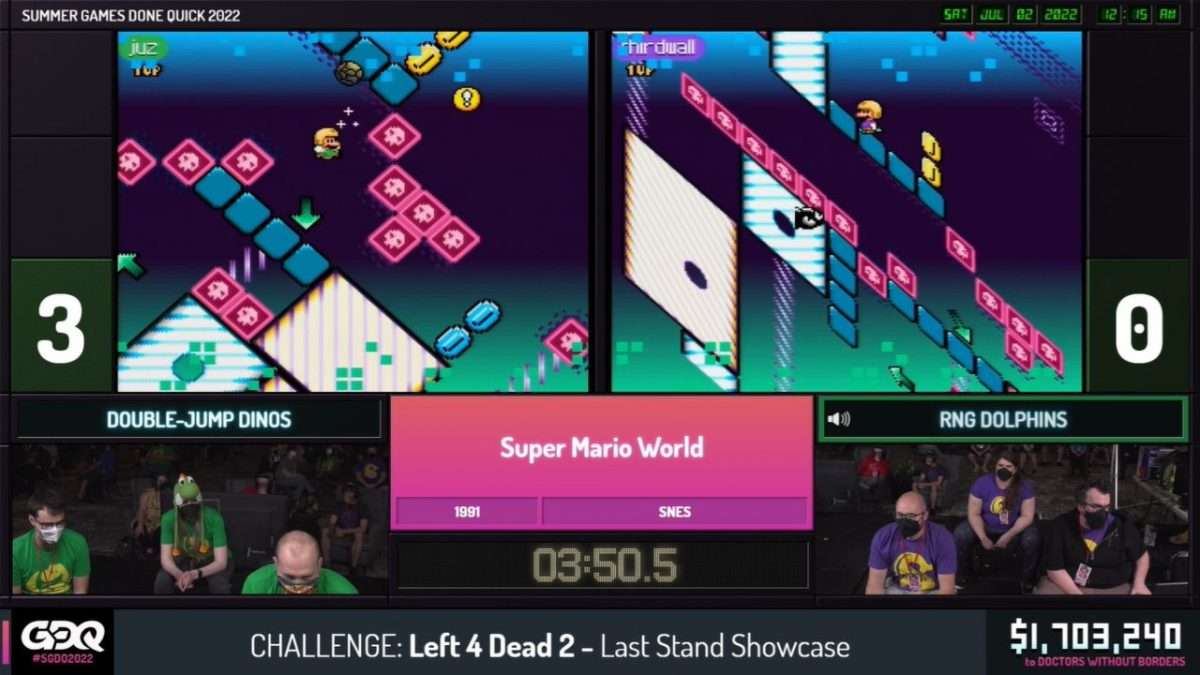 SGDQ 2022 day six was yet another 24 hours jam-packed with speedruns to binge, featuring games both new and old. Sliding into the prime-time weekend hours with appropriate speed, SGDQ 2022 day six was one of the best days yet, with even more money being raised for Doctors Without Borders. With one day left in the speedrunning marathon, we’re sad to see SGDQ 2022 coming to a close, but the penultimate day had more than enough great runs to keep us in high spirits.

Our Favorite Speedruns of SGDQ 2022 Day 6

To watch replays of these speedruns (and the rest of SGDQ 2022 day six), you can find videos on the GamesDoneQuick YouTube channel and Twitch VODs. We’ll do our best to update this article with videos and links as they become available!

Celeste was an instant classic when it was released in 2018, with the speedrun community picking up the game in full force. To show off the game’s True Ending route, runner GrosHiken sped through this beautiful and heartfelt platformer with notable grace and accuracy. Dashing through the game’s nine major chapters, GrosHiken linked together loads of movement tech, offering a smooth display of what makes Celeste so appealing. If you’ve never seen a Celeste speedrun before, this is a great place to jump in, as the commentary explains everything from the fundamentals to the smallest time saves.

Believe it or not, the roots of the speedrunning scene trail all the way back to the original Doom on PC, where the first documented speed competitions were performed. Playing the most recent game in the series, Doom Eternal, runner MuteD6 showed us why this revered FPS franchise is still arguably the king of speedy shooting. Throughout this two hour run, MuteD6 ripped and tore through Doom Eternal‘s incredibly hard Nightmare difficulty, collecting every single upgrade and completing all the secret encounters and challenging slayer gates. With tons of cool movement tricks, including punch-boosting, lurch-hopping, meat hook flings, and much more, the runner destroyed hundreds of demons in lightning speed. Seriously, this is probably some of the fastest FPS gameplay you’ll ever witness, so if you have a couple of hours, definitely check out this amazingly quick 100% speedrun of Doom Eternal.

Control (All Bosses) by DemonicRobots

Control was one of our favorite games of 2019, so we were especially excited to see DemonicRobots’ All Bosses speedrun of this creepy and unique third-person shooter. Braving the odd interior of the Federal Bureau of Control, DemonicRobots skipped and clipped around, locating the 10 major bosses and felling them with ease. In addition to their excellent accuracy, DemonicRobots used a handful of interesting glitches to bypass major sections of the game and sequence breaks to obtain powers earlier than intended. One of our favorite glitches shown was dubbed “Shieldy McSoary”, as it uses the shield power-up to clip through a wall, ejecting the runner out-of-bounds. With a fun collection of glitches, some awesome boss fights, and excellent commentary, this Control speedrun was definitely one of our favorites on SGDQ 2022 day six.

Although the “silly games” block took place during SGDQ 2022 day five, this hilarious horror/fast food simulator speedrun by teddyras would’ve fit perfectly, exuding the same appropriate amount of chaotic energy and humor. Tasked with cooking burgers and chicken sandwiches to force-feed giant bosses to their doom, teddyras pulled off a hilarious and engaging run of Happy’s Humble Burger Farm. Although a major glitch helped the runner skip a majority of the early game, most of this run showcases some speedy burger assembly, aided by teddyras’ sleep-deprived commentary. If you’re looking for another wacky speedrun that will leave you in stitches, this is one of the best.

We’ve seen many Donkey Kong Country speedruns at prior GDQ events, but this glitch-heavy run by Tonkotsu still blew our minds. In this run, Tonkotsu showed off the Reverse Boss Order category, which requires the runner to beat every boss in the game, but in the opposite order of their normal appearance. This required Tonkotsu to use a bunch of glitches, many being frame-perfect, to wrong-warp from the beginning of the game to the final world. Once at the end, the runner worked backward, defeating several bosses and skipping over levels by using wild glitches like the super jump roll. In just 30 minutes, this speedrun packs a huge amount of glitches and plenty of impressive platforming gameplay, making it one of our favorites of SGDQ 2022 day six.

When it comes to racing games, there are few that reach the extremely fast speeds of F-Zero GX. Even when played on normal settings, the track blurs by in the blink of an eye, and it can be hard to maintain control. Speedrunner Artful Hobbes upped the ante by performing a speedrun at max speed settings and on very hard difficulty, serving up a double-dose of challenge. Reaching neck-breaking levels of speed, Artful Hobbes dodged certain death, while taking tons of wildly dangerous shortcuts. While every speedrun of SGDQ 2022 has been sufficiently quick, this run of F-Zero GX blasts through the speed barrier to ridiculous levels of reflex-intensive racing.

The Legend of Zelda: Ocarina of Time (Triforce%) by dwangoAC, TASBot, Savestate, and Sauraen

This showcase of The Legend of Zelda: Ocarina of Time is a hypnotizing guide through a bunch of cut content that was featured in the beta version of the classic N64 title. Using complex glitches that allowed them to modify the code of the game, dwangoAC, Savestate, and Sauraen showed off some amazing content on an original N64 and Ocarina cart. Trekking across Hyrule in a custom-made side quest, this run features new items, bosses, character models, and more. While not a traditional speedrun, this showcase demonstrates the awesome things that can be accomplished with the arbitrary code manipulation glitch.

If you caught the True Ending speedrun of Celeste from earlier in the day, this Any% run of the Super Mario World ROM-hack is a perfect follow-up. Celeste.SMC is essentially Celeste, recreated inside the Super Mario World engine, resulting in a blissful combination of fantastic platforming. Runner MrMightyMouse absolutely demolished this beautiful ROM-hack, utilizing some classic Super Mario speed tech. The run is also commentated by the developer of the hack, providing explanations on the various tricks and how they differ from the intended method. Whether you love Celeste, Super Mario World, or just super fast platforming, this is a wonderful speedrun to watch.

We love watching speedrun races, and this relay race through a series of challenging custom Super Mario World levels was a highlight of the entire SGDQ 2022 marathon. In this race, team Double-Jump Dinos and team RNG Dolphins, each composed of three runners each, raced through a crucible of ultra-tough levels. Having never seen the stages before, the runners had to work out strategies on the fly, completing sections with never-before-seen mechanics and exceptionally tricky layouts. The race even included a level created by the developer of Celeste, which contained some hilarious trolly bits. With cheers from the live audience and a heightened atmosphere of competition, this relay race is a must-watch speedrun from SGDQ 2022 day six.

As the penultimate day of SGDQ 2022 wrapped up, the donation total reached $1.6 million raised for Doctors Without Borders. Watching those donations roll in and hearing the thoughtful messages has made SGDQ 2022 a constantly uplifting affair. We can’t wait to see what the final number will be when SGDQ 2022 closes out tomorrow.

We hope you’ve been following along and enjoying the marathon as much as we have. We’ll be back with a final recap after SGDQ 2022 ends tomorrow, but in the meantime, follows us on Twitter (@official90skid) for live reactions to the event. Until tomorrow, have a great night and enjoy the speedruns!