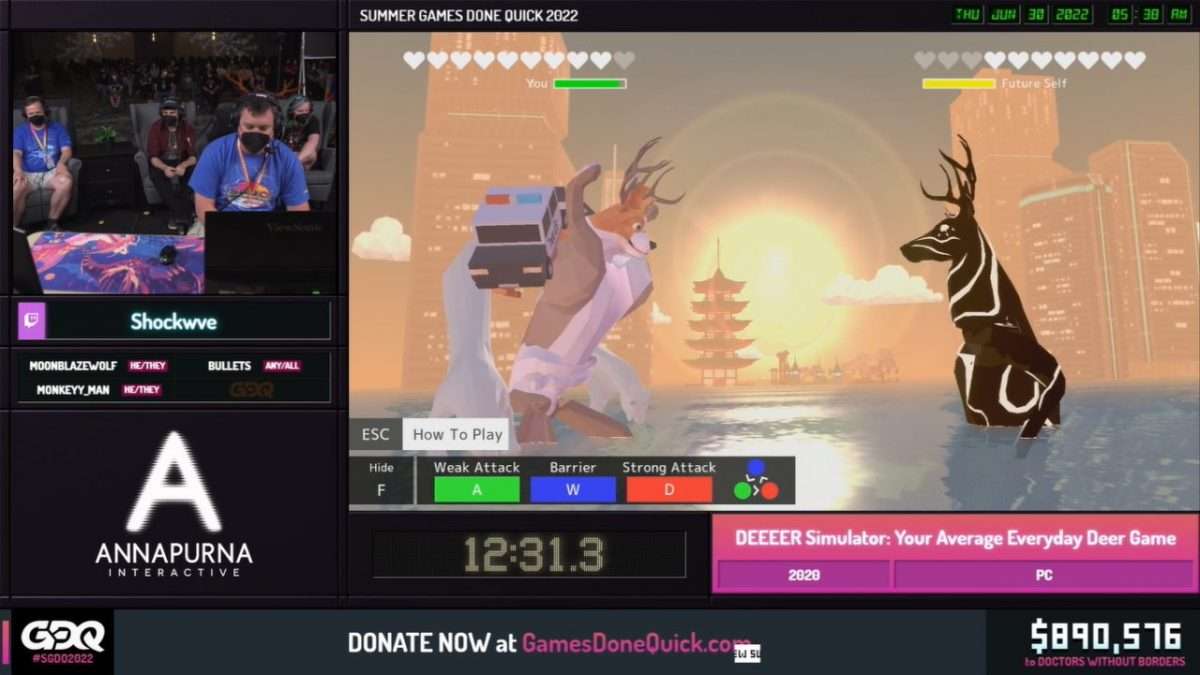 We’re now in the back half of SGDQ 2022, leading into the primetime weekend slots, and have been overwhelmed with all the mind-blowing speedruns on display. On day five of SGDQ 2022, we were treated to speedruns of N64 classics, eclectic spin-offs, and even a few music game showcases. As this seven-day-long speedrun marathon continues to raise funds for Doctors Without Borders, we’ve been glued to our desks, watching as many runs as possible.

To give you a few recommendations on what speedruns to watch from SGDQ 2022 day five, we’ve whipped up a list of some of our favorites. That said, we did not have the chance to catch every speedrun of the day, as sleep and hunger eventually come for us all. We assuredly missed plenty of other excellent speedruns, so we highly recommend checking out the entire day’s festivities and watching anything that sounds interesting! These picks are purely meant as a great place for you to start.

Our Favorite Speedruns of SGDQ 2022 Day 5

To watch replays of these speedruns (and the rest of SGDQ 2022 day five), you can find videos on the GamesDoneQuick YouTube channel and Twitch VODs. We’ll do our best to update this article with videos and links as they become available!

Banjo-Tooie (Any%) by duck

We love watching speedruns of N64 games, especially when the runner breaks the game wide open. That was definitely the case with duck’s Any% run of Banjo-Tooie, as the runner reached the end of this collect-a-thon adventure game in just over 35 minutes. While the game normally requires you to collect dozens of jiggy pieces to unlock new levels, duck completed the game with a single jiggy, instead glitching and clipping into various worlds. After collecting 350 musical notes and the five special abilities needed to beat the final boss, duck pulled off an incredibly difficult trick that requires wild angle-buffering and pinpoint precision. If you want to see one of the best N64 games wrapped up the same amount of time it would take us to beat the first world, check out this Banjo-Tooie run from SGDQ 2022 day five!

Devil May Cry (Dante Must Die All Collectables) by WaifuRuns

After running Halo Infinite on SGDQ 2022 day three, WaifuRuns returned for another fast-paced action speedrun, this time grabbing every collectable in Devil May Cry while playing on the mega-punishing Dante Must Die difficulty. This run requires a slew of combat tricks while dealing with massively powerful enemies and bosses, but WaifuRuns had little issue, nailing the S rank on most levels. Completing all the major missions, as well as all of the secret missions, WaifuRuns gave us one of the most impressive Devil May Cry showings in recent memory. The friendly and humorous commentary is just the icing on the cake for this exciting speedrun.

The Entire Silly Games Block by many runners

As opposed to the “awful games” block seen at the AGDQ marathons, SGDQ offers a wackier display of weird games with its lighthearted “silly games done quick” block. This ever-pleasurable tradition sees ultra-talented runners speeding through some spectacularly silly games, ranging from 8-bit platformers to modern mind-melting action games. Once again, the silly games block proved to be one of the best parts of SGDQ 2022, and we recommend you set aside time to watch the entire thing.

We particularly enjoyed the runs of DEEER Simulator, Gourmet Warriors, and King’s Quest V, but every speedrun in the silly games block was a blast to watch. No matter what your preference, whether it be for truly absurd titles or colorful and quirky games with lots of personality, the silly game block provides. Accompanied by costumed runners and lots of laughter, these speedruns will have you giggling with glee for hours.

Metal Gear (Easy Any%) by JosephJoestar316

Seeing as how the original Metal Gear celebrates its 35th anniversary this year, there was no better time to catch a speedrun of this 1987 MSX classic. In this Any% speedrun, runner JosephJoestar316 threw the concept of stealth out the window, weaving through guards and barreling from keycard to keycard in a sprint to the finish. Besides stopping for a few moments to pick up a grenade launcher and occasional health rations, JosephJoestar316 breezed through Solid Snake’s mission to Outer Heaven.

We loved playing Kirby Tilt ‘n’ Tumble on our Game Boy Color back in the early-2000s, but watching swordsmankirby perform a speedrun of this cutesy spin-off was unlike anything we’ve seen before. In the original game, players tilt their Game Boy to roll Kirby around the level, utilizing an accelerometer inside the cartridge. In order to stream the game properly, swordsmankirby needed to use a Game Boy Player for the Nintendo GameCube, essentially forcing him to wield the entire game console as a controller. Showing off all 32 levels instead of using any warps, the runner pinballed from start to finish, occasionally hitting switches and defeating end-world bosses along the way. This speedrun has some fun tricks and cool movement optimizations, but it’s worth checking out just for the controls alone.

Metal Gear Rising: Revengeance is far from your average Metal Gear game, with minimal stealth and lots of over-the-top action. In the speedrun of this underrated and wonderfully weird hack ‘n slash, runner Mekarazium pulled off a torrent of awesome combos, performed a few out-of-bounds style skips, and had a great time doing so. Solid commentary provides insight on both the lore and the speed tech, so you’ll never be left confused. To top things off, Mekarazium also performed a speedrun of the game’s Blade Wolf DLC, nabbing a new world record in the process.

Although not a speedrun in the traditional sense, this showcase of the Dance Dance Revolution-style game Stepmania offers some of the most literal speed running of the entire week. Playing together in a couples exhibition, both SpootyBiscuit and windeu laid down some epic dance moves, clearing 9-footer, 10-footer, and even 13-footer charts with ease. Like the other speedruns shown at SGDQ 2022 day five, this Stepmania showcase represents a level of gaming skill that’s simply unachievable without hundreds of hours of practice. Throw in some catchy tunes, crazy modded arrow mechanics, and you’ve got yourself one of the best music game showcases we’ve ever seen!

As SGDQ 2022 day reached its end, the total donations surpassed $1.1 million, hitting seven figures with loads of time to spare. With some of the biggest days of the marathon left to come, we have a good feeling that the total will at least double before the final day. It’s always great to see these speedrun marathons reach massive levels of success, so watching that donation total rise has been amazing to watch.

That’s all we’ve got on SGDQ 2022 day five! Follow us on Twitter (@official90skid) for live reactions as the marathon continues. Be sure to check back for more daily recaps of SGDQ 2022 until the end of the event. Have a great weekend and enjoy the show!