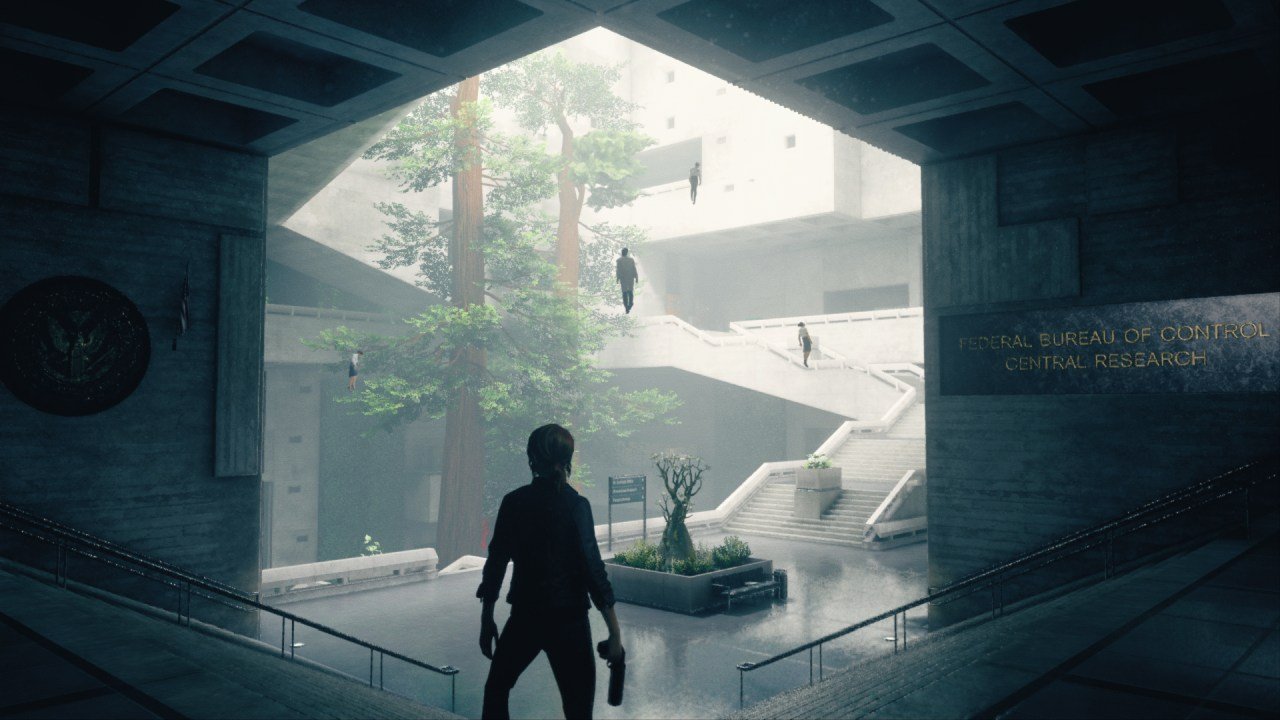 Control Review – Inside the Oldest House

Control is the latest third-person action/adventure game from Remedy Entertainment, the developer of games like Alan Wake and Quantum Break. The studio is well known for their often weird and paranormal-filled adventures, which mix unique narratives with exciting yet challenging gameplay. Control is pretty weird, even by Remedy’s standards, diving into the quirkiest corners of thought and philosophy. Taking place inside a seemingly sentient government building wrapped in red tape and shadowy operations, conspiracy is often fact in Control. It’s an interesting concept, but does this reality-bending tale make for a fun gameplay experience as well?

The Cell and the Poster

Control puts players in the shoes of Jesse Faden, a young woman arriving at the Federal Bureau of Control in New York. Her motives are unknown at first, with her inner monologue cluing us in on a mysterious event from her past. She talks about a world beyond the reality we know; a world she has glanced into before. Compelled to travel to the Federal Bureau of Control, Jesse hopes to find clarification on her troubling memories. Unfortunately, that clarification comes with even more questions.

Before long, Jesse finds herself in a place of power among the FBC, and the facility has been placed under lock down. An illusive and otherworldly threat known as the Hiss have found their way into the FBC building, and only Jesse will be able to help. In order to repel the Hiss, Jesse must descend further into the ever-shifting office halls of the Bureau. As she uncovers evidence of the Hiss and its influence, she also uncovers the true purpose of the FBC.

The Federal Bureau of Control is shrouded in mystery. It’s a branch of government that exists within the redacted sections of documents, where mysteries only beget deeper mysteries. Referred to as “the Oldest House”, the main building of the FBC is filled with twisting corridors and mind-bending mazes. It’s the kind of place you’d expect to see on an episode of The Twilight Zone, where reality is merely a suggestion. Exploring and progressing through its many rooms and areas is often filled with deja-vu, as you begin to question your own perception.

There’s a map you can reference when things get too confusing, but it can occasionally make things even more mind-boggling. The map fails to indicate elevation changes or significant roadblocks, so you’ll often get turned around even when following the map. It’s a handy tool to get some sort of bearing on your location within the building, but it’s not designed well enough to be entirely reliable. Most of the time, it’s actually better to follow the in-game signs and posters, which are often better at directing you to the right location. There are areas that cannot be accessed when you first find them and require later backtracking, which is made easier by a fast travel system that allows you to jump between cleared checkpoints.

You’ll often glean more insight into the world of the FBC from various collectibles scattered throughout the building. Various faxes and notes can be collected, offering tidbits of information on both the history and function of the supernatural occurrences you come across. This trail of information was consistently interesting, compelling me to search every nook and cranny of the Oldest House.

In Service of Her Country

Gameplay in Control is a good mixture of exploration and third-person action, with an emphasis on fast-paced and diverse combat. The game is structured by missions, often given to you by various characters you’ll meet. Although discovering the secrets of the FBC and Jesse’s past are the main focus of the game, there’s plenty of intriguing side content to investigate. Various side mission and combat challenges can be undertaken, awarding players with crafting materials, gun mods, and experience. Occasional puzzle-solving elements shake up the pacing, forcing you to slow down and take a breath. There are also a handful of secret areas and hidden bosses to discover, which adds a new depth to the gameplay and provides a dash of replayability as well.

Your main enemy in Control are entities simply described as “the Hiss”, which take on a variety of forms and can possess humans as well. Encounters with the Hiss usually erupt into chaotic and supernatural firefights, where you’re never quite sure what the enemy is capable of. Luckily, Jesse is well-equipped to deal with them. The gunplay revolves around your “service weapon”; a gun that can shift between forms with the tap of a button. You can unlock new forms as you progress, and each form can be upgraded for extra strength. Various weapon mods can be equipped and crafted, granting passive bonuses like increased headshot damage or rate of fire. There’s no ammo in Control, as the service weapon works on a cool-down system. This encourages you to use your other main combat abilities, including telekinesis, mind control, and more. Health can only be obtained by killing enemies and recovering fallen health shards, so you’ll have to use your entire arsenal with some strategy to boot.

As you find new “objects of power”, Jesse acquires new skills to use in exploration and combat. You can chuck debris at enemies with your telekinetic launch ability, dash through the air, defend yourself with a floating wave of rocks, and perform a variety of other cool maneuvers. Combining your use of the service weapon with a variety of supernatural powers is the quickest way to success, and its a combat system that feels consistently satisfying and entertaining. The difficulty can be a bit tough at the start, and a couple of boss fights led me to a frustrating amount of retries. You’ll have to grin and bear the difficulty though, as Control has no easier (or harder) difficulty levels to choose from.

The Color of the Void

Control has an arresting visual style, blending together the sterile environment of office departments with a creepy use of lighting and color. It’s very atmospheric, embodying the mystery of the game in a more visual manner. The base experience isn’t exactly “scary”, but it is ripe with unsettling imagery and a generally creepy vibe. The visual design of the game’s environments goes a long way in furthering the supernatural vibe as well, as each new area brings unique aesthetic surprises. When gameplay gets chaotic, Control also becomes quite a spectacle, with destructible environments and tons of particle effects. I was consistently compelled by Control‘s visuals, which work very well to set the tone.

Unfortunately, a lot of Control‘s issues stem from its vibrant visuals (and the toll those visuals take on your hardware). Even on an Xbox One X or PS4 Pro, Control is prone to slowdown and significant frame rate problems. Combat gets sluggish when there’s too much on the screen, and there’s an occasional stutter as areas attempt to load. I also encountered an issue where my map would not fully load, rendering it essentially useless. These issues are consistent enough to make a lasting impression, and frustrating enough to impact gameplay and overall enjoyment. Hopefully these issues will be fixed with time, but there’s never any guarantee they will.

The Bottom Line on Control

Control is much like other Remedy Entertainment games; it’s immensely unique and fun to play, with great art direction and a compelling narrative. However, it also seemingly lacks polish, with apparent technical issues and some annoying difficulty spikes. Despite these problems, Control stands out as one of the year’s most effective games, packed with mystery and intrigue. I had a great time exploring the many departments of the Federal Bureau of Control, and uncovering the secrets behind their locked doors. It’s a game that often left me perplexed, never quite sure where the next turn would take me.

The main story of Control should only take you around a dozen or so hours to finish, with a number of side missions and hidden secrets for completionists to find. Most of those hours are of immense quality, providing a tough but rewarding gameplay experience. Its narrative might be a bit too weird or abstract for some folks, but I found it easy enough to understand and digest. No matter how compelling the story is though, the technical issues still remain, regardless of your platform of choice. As long as you approach Control with an open mind, I’m confident most fans of action games will enjoy it. If anything, it’s an ambitious title with a stylish supernatural flavor, and that’s worth celebrating.