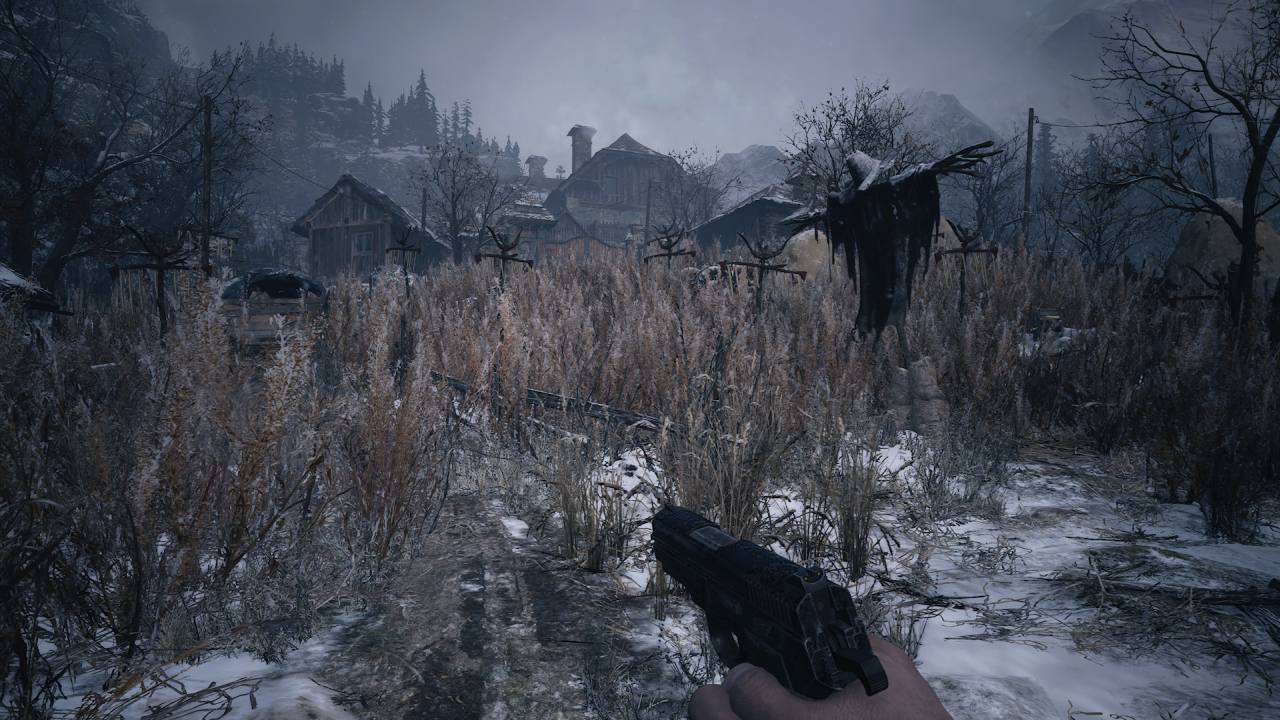 Resident Evil Village is a direct sequel to 2017’s Resident Evil 7: Biohazard, a first-person horror game that reignited the dread and terror that made the franchise famous. The game puts you in the shoes of everyman protagonist Ethan Winters, now living abroad in Europe after the horrifying events of the previous game. Unfortunately for Ethan, Resident Evil Village sends you on yet another bloody and demented quest, blasting through an assortment of supernatural horrors. With a bigger emphasis on combat, a larger cast of characters, and inspirations from other Resident Evil titles scattered about, Resident Evil Village aims high. Does this anticipated sequel deliver a violent, genre-defining horror experience, or does Resident Evil Village mark another decline for the franchise? Let’s see how Capcom’s newest survival horror title fares.

A Cold and Quaint Village

Resident Evil Village picks up three years after Resident Evil 7: Biohazard, with Ethan Winters settling down with his wife Mia and six-month-old daughter Rose. After enduring the ordeal at the Baker House back in Louisiana, Ethan and Mia attempt to start a new chapter as a growing family. Ethan struggles with paranoia and post-traumatic anxiety, which turns out to be warranted, when his family is suddenly attacked in the middle of the night. Although Ethan survives, he is left stranded near a rustic and seemingly abandoned village, with his daughter in the hands of a violent lunatic. With nowhere to turn, Ethan must endure another disturbing journey to rescue his daughter and save his family.

The eponymous village is lorded over by Mother Miranda, a shady, cloaked figure who is praised by seemingly everyone Ethan meets. There are four lords who report to Mother Miranda, including the towering, vampire-like Lady Dimitrescu and the sunglasses-donning killer Heisenberg, to name a few. To save his daughter, Ethan carries out a sightseeing adventure across the town, visiting each disciple of Mother Miranda as he uncovers more information about the village’s sinister secrets.

Unfortunately, the actual plot is pretty mediocre, clumped together with some sub-par voice-acting and laughable dialogue. At the start, Resident Evil Village is downright creepy, but after a few hours, it quickly veers into campier territory. Ethan’s adventure grows steadily more ridiculous, culminating in a head-scratching finale that feels way too goofy. It doesn’t help that Ethan and many of the focal villains are written and voiced poorly, riddling off cheesy one-liners with hollow bravado. At its best, the plot in Resident Evil Village is intriguing and morbid, but at its worst, it’s nonsensical, self-indulgent, and a bit dumb. This is more disappointing than anything else, as there are some really engaging plot points within the greater narrative.

Although Resident Evil Village shares the claustrophobic and creepy vibes that permeated Resident Evil VII, there’s a greater emphasis on shooting, looting, and overall action. While the opening hours are full of dread and terror, Resident Evil Village slightly pumps the brakes, offering an experience more like a scary first-person shooter than an outright horror game. There are still plenty of scares, puzzles, and signature Resident Evil exploration, but the fast pace and abundance of helpful features make it a far less horrifying game than its predecessor.

As you explore the village and its surrounding area, you’ll gun down a nice variety of enemies, including lycans, flying beasts, standard shamblers, and more. Resident Evil Village offers a nice spread of locales, from the decorated parlors of Castle Dimitrescu to the dusty tunnels in the Abandoned Mines. You’ll step foot inside the haunted halls of House Beneviento, and take a dip in the murky lake near the Drowned Houses. The consistent discovery of new, distinct areas gives the game a refreshing pace and keeps things visually interesting.

You start your journey with a measly pistol, but as is the custom in Resident Evil games, you’ll eventually find a shotgun, sniper rifle, magnum, and a few other firearms. Enemy encounters are frightening at first, but you’ll be mowing down baddies without much hassle before long. Ammo and healing items are plentiful, at least when compared to other Resident Evil titles, thanks to the introduction of a simplistic crafting system. As you examine your surroundings, you’ll find resources like gunpowder, herbs, metal parts, and more. These items can be combined in a crafting menu, quickly providing you with medicine, ammo, and explosives.

As you amass an arsenal of resources and weapons, you’ll have to manage your inventory space, similar to the system in Resident Evil 4 and the recent classic remakes like Resident Evil 2 and 3. This requires you to shuffle around ammo and weapons on a grid, ensuring that there’s enough room for future loot. To reduce excessive clutter, items required for progress (like keys and tools) and crafting resources are not included in the main inventory. Unlike other Resident Evil games, where you’re constantly trying to assess the proper loadout before progressing, Resident Evil Village encourages you to grab everything in sight and figure it out later. I never found myself strapped for space until the very end of the game, where I was hoarding enough ammo to take down bosses without breaking a sweat.

The Duke of Goods

As you defeat enemies and loot the environment, you’ll gather Lei, the main currency in Resident Evil Village. Lei coins can be spent by visiting the Duke, a massively overweight merchant who serves as both a supplier and guide during Ethan’s time in the village. The Duke is very much a parallel of The Merchant from Resident Evil 4, even quoting the iconic salesman from time to time.

The Duke offers plenty of goodies to spend your coins on, including ammo, medicine, crafting recipes, and weapon upgrade parts. You can also upgrade your existing weapons by spending Lei, providing more damage, faster reload times, higher ammo capacity, and more. If you want more Lei, you can sell items to the Duke at a modest price, or go hunting for hidden treasures hidden in the village. These rare valuables are always worth seeking out, especially as your arsenal grows and more upgrades become available to buy.

The Duke is also a pretty big fan of food, always hankering for the next tasty treat. You can collect various ingredients around the map, including fish, poultry, red meat, and more. These ingredients can be delivered to the Duke, who will cook them up into exquisite snacks that permanently boost your stats. By taking your time to slaughter any fish, chickens, or pigs you find loitering around, you can earn hefty bonuses like increased health, faster movement speed, and more. While the cooking feature is quirky and fun, hunting down ingredients can grow dull and the whole thing feels a bit goofy within the context of the story.

Resident Evil Village is a perplexing game, but one that I had a pretty damn good time playing through. When I go into a Resident Evil game, I want to solve some puzzles, shoot some monsters, and get immersed in the experience. Generally speaking, Resident Evil Village rose to the occasion, but to varying degrees of success. The focus on action over scares might bother some franchise faithfuls, but I think it gels well with the game’s faster pace. There are a lot of ideas packed into the 10-hour or so story, but that’s not always a good thing. While the majority of Village works, there are some key elements that falter.

Resident Evil Village hypes up its own story far more than necessary, struggling to find a tone as the narrative expands. At a certain point, it feels like the writers threw in the towel, prioritizing wacky set-piece action over anything resembling a believable plot. Despite these plot problems, Resident Evil Village is fun to play and has a surprising amount of replayability. Whether it’s the in-game challenges, unlockable difficulty levels, or the bonus Mercenaries time-trial mode, there are plenty of reasons to return after your initial playthrough. Ultimately, Resident Evil Village is a very ambitious game that’s a bit uneven, but will still satisfy fans of first-person horror.

Note: This game was reviewed on the Xbox Series X using a retail copy.