Rejoice, PUBG players! Soon PlayerUnknown’s Battlegrounds will be getting a second map, and developers have officially revealed its name, topographical image, and an outline of several points of interest. The new desert map is called Miramar, and it’s ready for its first batch of contestants.

So far, PUBG has featured only one map for its battle royale matches where players must collect armor, weapons, and food in order to be the last one standing. The game’s first map, called Erangel, is quite expansive with several different types of sites and landscapes, but being a single map, it can understandably feel monotonous after dozens of matches.

“When we decided to create a new map, we focused on creating an environment that is very different from Erangel,” developers said in a Steam blog post. “We wanted to go the opposite direction of having lush fields and forests and arrived at the harsh and unforgiving desert of what we can now reveal is Miramar. The unique terrain and dense urban areas of Miramar will create a new Battle Royale experience where the old strategies may no longer work and new tactics are required.” 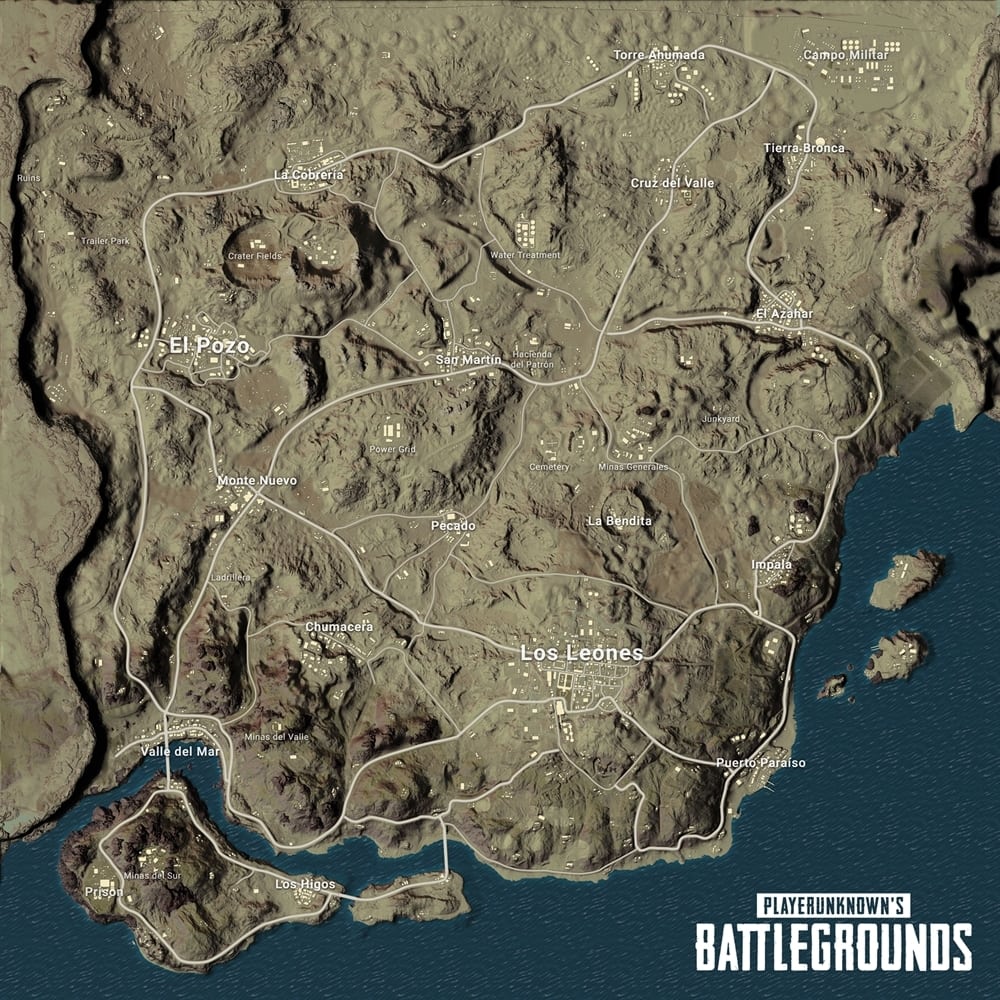 The post went on to give details on some of Miramar’s key points of interest, shown in the above topographical map. The densest developed area is Los Leones, the map’s largest city with high vantage points to secure and abandoned buildings to loot. Other towns include El Pozo, Monte Nuevo, Valle del Mar, La Cobreria, San Martin, Pecado, and Chumacera, each with its own distinctive features and gear.

In between Miramar’s towns are rolling hills, rocky mountains, isolated buildings, and other interesting locations such as a cemetery, junkyard, military camp, trailer park, water treatment plant, and prison. There are both large and small roadways connecting the cities, in addition to a couple of “crater” locations that are unique to the desert map.

Developers did not give an exact release date for Miramar but said it will be playable in PUBG‘s test server before the game hits its 1.0 version on PC, which is said to be coming sometime this month. The title is releasing on Xbox One December 12th through the Xbox Game Preview program, but it is not clear if the desert map will be included with this version at launch or will arrive later in an update.

On top of the new terrain and locales, players will see freshly implemented weapons, vehicles, and other content in PUBG‘s desert map. The Win94 rifle was recently revealed and will be exclusive to Miramar, so don’t expect to see it on the Erangel map. A new truck was also announced to be available only on the desert map, and you can likely expect other Miramar exclusives as well as new game-wide content soon.

PlayerUnknown’s Battlegrounds is available now for PC via Steam Early Access and releases on Xbox One December 12th.