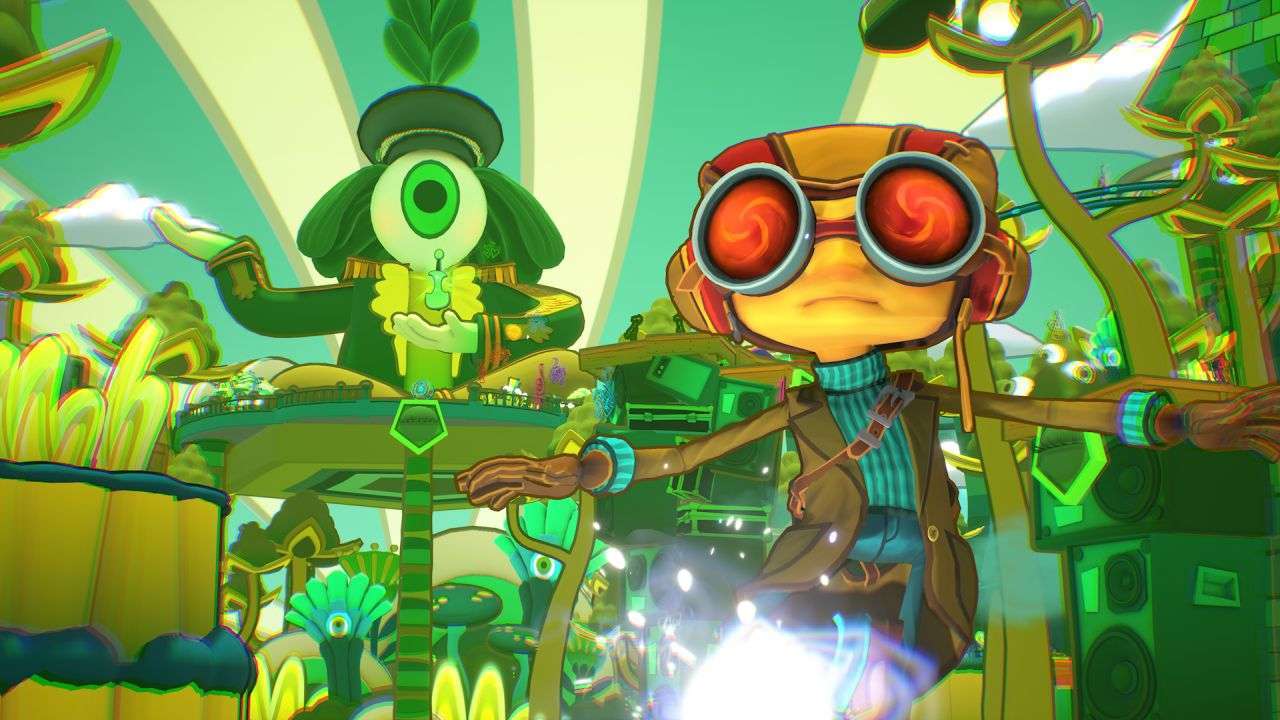 Back in 2005, developer Double Fine released Psychonauts on the Xbox, PC, and PlayStation 2. This critically acclaimed platformer won over the hearts and minds of most all who played it, but the game had an underwhelming commercial run. While many doubted the return of Razputin Aquato, the telepathic acrobat who ran away from home and infiltrated a summer camp for children with psychic powers, a sequel was eventually announced. After years of delays and the acquisition of Double Fine by Microsoft, Psychonauts 2 has finally been released, pulling players back into the psychedelic world of supernatural powers and brain exploration.

As a direct sequel to the original game and its virtual reality spin-off, Psychonauts in the Rhombus of Ruin, Psychonauts 2 continues Raz’s story as he explores the bustling headquarters of the Psychonauts, an elite group of super-powered psychics who keep the world safe from nefarious villains. With a hefty helping of trippy visuals, excessive collectibles, and unique levels, Psychonauts 2 promises a throwback adventure ripe with excitement and originality. Does this cult classic sequel live up to the lofty expectations, or is Psychonauts 2 an utter disappointment? Let’s see how Double Fine’s latest outing fares!

Psychonauts 2 picks up immediately after the events of Psychonauts in the Rhombus of Ruin, with Razputin Aquato and the senior members of the Psychonauts heading back to their headquarters. Having just rescued Truman Zanotto, the kidnapped head of the Psychonauts, the team attempts to pry information from his captor, the evil dentist Dr. Caligosto Loboto. Realizing that Loboto couldn’t have kidnapped their leader without some inside help, the Psychonauts suspect a mole within their ranks. Arriving at the brain-shaped Psychonauts HQ, the Motherlobe, Raz enters the internship program and begins to uncover some dark secrets.

From there, Psychonauts 2 quickly builds a whimsical tone of adventure, as Raz explores the mysterious faculties of the psychic spy agency. While fans of the original Psychonauts will surely appreciate the story, it’s just as effective for newcomers, thanks to an enthralling mystery, emotive characters, and some genuinely funny writing. The entire narrative is framed around the mind, with core elements of psychology explored through a psychedelic lens.

Despite its lighthearted tone, the story isn’t afraid to veer into more serious territory, covering heavy topics like addiction, anxiety, grief, and more. Most of the narrative is breezy and fun, which makes the serious moments all the more effective. It’s an eccentric tale told with excellent pacing and a couple of mind-blowing twists and turns, touching on important themes in a relatable way. Whether or not the story resonates with you as much as it did with me, there are plenty of affable characters and laugh-out-loud moments that make it worth the ride.

Running Through Your Mind

Luckily, the story isn’t the only good thing in Psychonauts 2. Like the first game, the majority of your time is spent platforming, exploring the environment, and picking up collectibles. Whereas the original Psychonauts felt a bit clunky, the sequel offers much tighter controls. It feels great to leap around levels, glide over dangerous pitfalls, and generally explore each area. There are a handful of open-ended hub areas to check out, including the Motherlobe HQ, a nearby forested campground known as the “Questionable Area”, and more. Hundreds of collectibles are scattered around and ripe for the picking, encouraging you to travel off the beaten path and scour your surroundings.

Although it’s plenty of fun to wander around picking up collectibles, the main attractions are the dozen-plus story levels, each of which takes place inside someone’s mind. By using his trusty PSI Portal, Raz can enter someone’s psyche, bouncing around their innermost thoughts in a tangible world. Throughout the game, you’ll enter over a dozen unique brain worlds, modeled after the personality of each character. There’s an exceptional variety in stage design, along with a wide range of trippy locations to explore. You’ll take a dive into a library made out of paper while in the mind of a writer, try your hand in a neon casino while investigating a gambler’s thoughts, and even embark on a psychedelic journey through a music festival as you bound around a musician’s brain.

These self-contained stages are wildly imaginative, with some incredible tricks that mess with your perception of space and size. With a flurry of bright colors, catchy music, and consistently intriguing stage design, each brain-based level is a delight to experience. The thematic differences between each level provide a refreshing pace, as no concept or level layout feels repetitive. With its satisfying controls, inspired environments, and a substantial amount of style, Psychonauts 2 offers a seriously impressive adventure.

During your mind-treks, you’ll encounter various psychological enemies that must be eliminated, including Doubts, Censors, Panic Attacks, and Bad Ideas. Luckily, Raz has a handful of psychic abilities to help wipe these negative emotions from existence. In addition to a standard melee attack and dodge, Raz can summon a ball of fire by using pyrokinesis, spray mental bullets with a PSI Blast, throw debris with telekinesis, and more. Some of these powers also help Raz navigate the environment and solve puzzles, including his handy Levitation ball, which acts as both a faster form of movement and a mid-air glide. As you progress through the story, you’ll slowly unlock new abilities, allowing you to access previously blocked areas.

There are many different types of collectibles in Psychonauts 2, including challenge cards, figments of imagination, emotional baggage, mental vaults, a currency known as Psitanium, and more. Finding most of these collectibles helps raise your PSI rank, giving you upgrade points to enhance your psychic abilities and make you more formidable in combat. Psitanium is spent at special vending machines and can be used to purchase various consumable items, as well as pins.

You can equip up to three pins at one time, and each pin offers a passive bonus. While some pins modify your psychic abilities, others can increase the drop rate of currency and unlock new offensive moves. The pin mechanic is a cool idea, but it feels mostly optional. By the time I finished the game, I had only purchased six or seven pins, finding no need to experiment with others once I discovered my preferred trio. It often feels smarter to save your Psitanium for health packs and other upgrades, as many of the pins lack the power to justify their lofty prices. Although the pin system feels underwhelming, it doesn’t negatively impact the game at all, but feels slightly unpolished when compared to the rest of the experience.

The Bottom Line on Psychonauts 2

While the first Psychonauts was an endearing but somewhat flawed platformer, Psychonauts 2 doubles down on the good ideas and fixes most of its issues, rising above its predecessor as a more polished and enjoyable game. Instead of trying to re-define the series, Double Fine sticks to the established formula, improving on every feature and mechanic as much as possible. Raz’s second big adventure feels more developed and realized, in terms of both its narrative and gameplay. Plus, thanks to a handful of “assist features” that lessen the difficulty of combat, Psychonauts 2 is an approachable game for both platformer veterans and newcomers.

Overall, Psychonauts 2 was steeped in hype leading up to its release and somehow managed to surpass those high expectations with an emotional story, lots of style, and a fantastic gameplay feel. Over the course of the main story, I found myself gasping in surprise, smiling with glee, and generally vibing well with the whole experience. The game will take you anywhere from 15 – 30 hours to complete, depending on how many collectibles and side-missions you pursue, resulting in an enjoyable platformer with plenty of content. Whether you have nostalgic memories of playing the first game or are completely new to the series, we highly recommend Psychonauts 2.