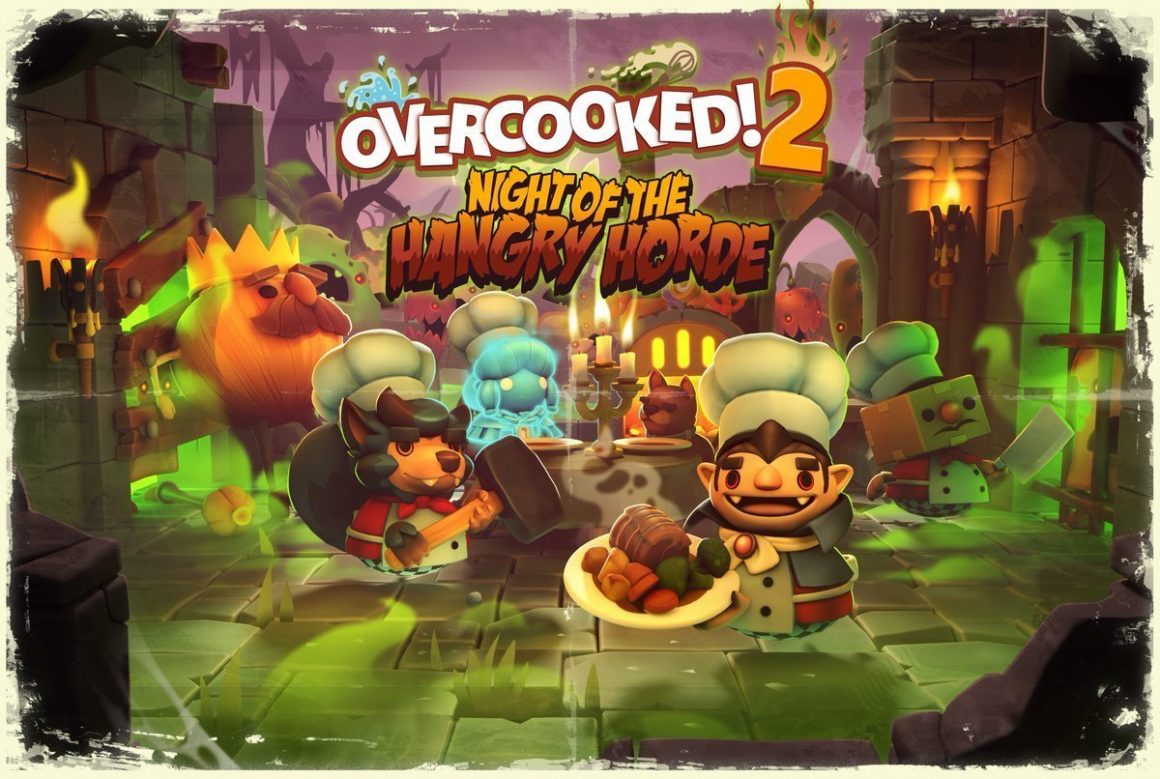 During a demonstration at the Nintendo Treehouse live from E3 2019, Overcooked 2 surprised us all by launching its third major piece of paid DLC for the chaotic cooking co-op game. Overcooked 2: Night of the Hangry Horde has an uncharacteristically spooky theme for June, you’ll have to fight against the hangry hordes of the unbread as these unsavoury creatures will try to break into your boarded up kitchen. If you have the season pass for Overcooked 2, you can download the DLC right now for free, or if you don’t have it you can buy it for £7.99.

Night of the Hangry Horde introduces new recipes, four new chefs, twelve spooky kitchens, and eight horde wave levels. There are also new tools you need to master, such as the guillotine that you use to chop ingredients. There’s also a furnace that needs to be stocked up with coal that you need to use to make some delicious roast dinners. In addition to the normal Overcooked levels, there are still some secret Kevin levels throughout the map too, so you make sure you’re getting as many stars as possible to keep him happy and unlock the extra kitchens.

The new world in Overcooked 2: Night of the Hangry Horde is very traditionally spooky looking, giving very haunted castle vibes. The unbread can be seen scattered around the map, so if you feel particularly vindictive then you can run them over for a funny little animation of zombie bread falling over and struggling to jump back up. The map itself is pretty big, with twelve new levels of standard gameplay, and eight horde levels. Like I said, it seems a little strange to release Night of the Hangry Horde in June, but then again Team17 also released their Surf n Turf summer DLC in December.

The Horde Levels are the new major addition to this DLC, which is somewhat similar to the endless game mode that came as a free update to the main game. Horde mode does have an end, however, as you have to manage the aggression of the hangry horde by keeping them fed. Instead of orders running out of time, the horde will break through your barricades if you don’t feed them fast enough.

You can repair the barricades, however, using the money you’ve earned by serving them. There are multiple areas that the horde can break through and each has its own specific order, so make sure not to serve the wrong order to the incorrect unbread! There aren’t stars to be earned in these levels, but instead, at the end of all the waves (if you survive that long) the health of your barricades is assessed and you’re given a score based on that.

Overcooked 2: Night of the Hangry Horde packs more chaos and ridiculousness that you love about the main game but does so with a new quirky theme. The world is atmospheric and the art style is adorable as ever, just with a spooky twist. So far, each DLC for Overcooked 2 has managed to add something that the main game didn’t have which keeps with the overall theme. In the case of the Night of the Hangry Horde, the new methods of preparing and cooking food not only fits with the spooky vibe that it wants to give but also adds an interesting change in gameplay. The all-new horde mode provides a slightly new challenge that is just different enough than the normal levels we’re used to so that it still feels familiar while giving players a new way to progress through the map. Overcooked 2 is one of the best couch co-op games in recent years, and Overcooked 2: Night of the Hangry Horde is an excellent addition to an already great game.