Following on from Team17’s deserved nomination at the BAFTAs, last month the second piece of downloadable content for Overcooked 2 was released on 18th of April. Campfire Cook Off launched on PC, Xbox One, PS4, and the Switch. The DLC is the second available for the game, and adds a new world with new kitchens to conquer and more fun to be had. The DLC launched on the same day as the all-new Season Pass, toasting that Overcooked 2 will have at least two more DLCs launching later this year. The season pass also includes Campfire Cook Off, so if you’ve been itching for more kitchen chaos then Team17 have got you covered.

CFCO, like its predecessor Surf ‘n’ Turf, adds a whole new world to the map within the extras menu once you’ve launched the game. The world is deceptively large, boasting around 15 new kitchens including a secret Kevin level to be unlocked. The world is wilderness themed, so anyone who went to a summer camp (or seen one in movies) will feel right at home within all the luscious forestry and foliage. When playing co-op, I usually find it ends up being a struggle for control of the vehicle anyway, but in CFCO I was quite happy to enjoy the scenery. 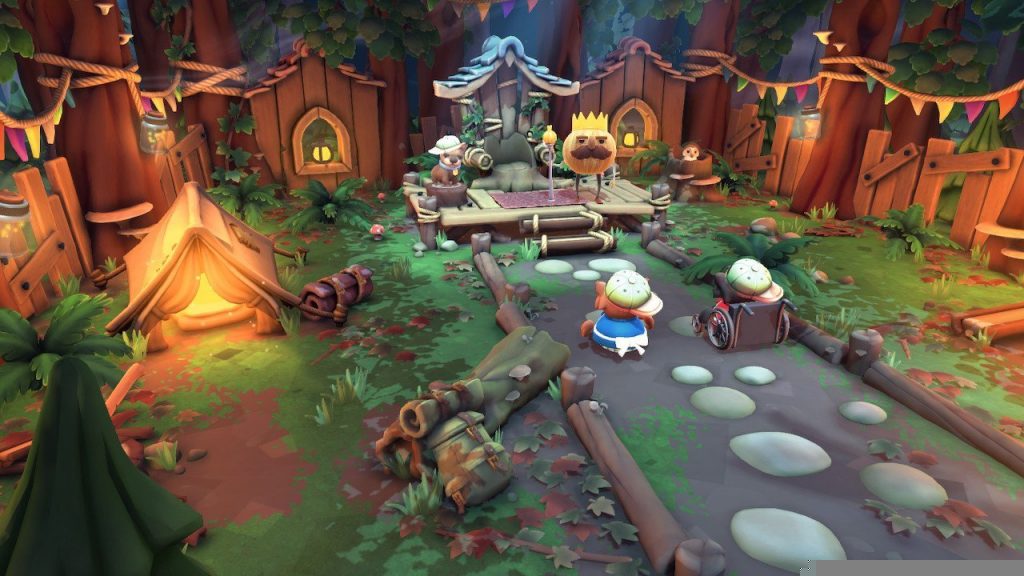 The designs of the new kitchens are also campfire themed, introducing a few new methods of cooking and preparing ingredients. Backpacks have been introduced, meaning that in some levels your character will have an ingredient in their bag that can only be picked up by another character, and vice versa. This can lead to some pretty hilarious arguments when multiple players are spinning wildly in circles trying to let someone else get that all important tomato from their bag while simultaneously trying to get some dough from theirs. Also introduced is the campfire, an open grill that needs chopped wood in order to cook quickly. Along with chopping ingredients, you’ll need to keep an eye on those heat levels if you want to get orders out in a timely manner.

In addition to the new kitchens, some new recipes are also added in this DLC to suit the camping aesthetic. S’mores, new pizzas, and new pancakes are a few of my favourite recipes included in CFCO. The new recipes fit the overall theme very well, and as always do a very good job of making me hungry and frustrated as I try to prepare everything with my fellow co-op players without setting anything on fire. It would have been nice to get a larger range of new recipes to try out, but it didn’t really bother me while playing. Some new chefs have also been added, some human and some animals, for players to earn through collecting enough stars on certain kitchens. I will probably be sticking to my favourite ginger cat, but it’s always nice to have options.

Overcooked 2 is easily my favourite co-op game to play, and so far the DLC that has been released alongside it has not disappointed. Campfire Cook Off is a low cost, highly enjoyable piece of DLC, building on what was so good about the main game, whilst also addressing some of the complaints about the difficulty level. Instead of allowing players to aim for 4 stars, the maximum is kept at 3 for now, and while I managed to get 3 stars on all levels it does take some brainstorming and some minor frustration if you want to appease the almighty Onion King and Kevin. If you were a fan of Overcooked 2, then I would absolutely recommend giving CFCO a go. It isn’t particularly expensive, but it offers quite a few hours of hilariously frustrating gameplay.