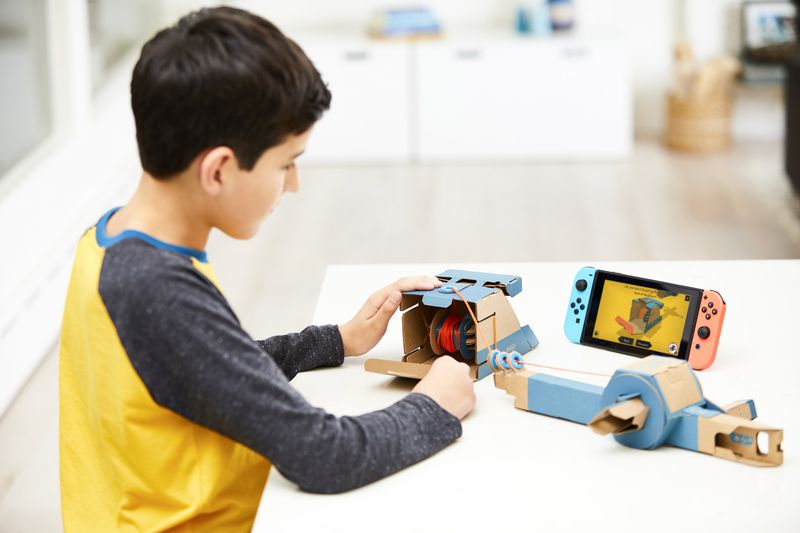 Nintendo is bringing a whole new kind of gaming experience into the world in the form of Nintendo Labo, a system of DIY cardboard accessories for the Switch console. The new line is built with kids in mind, offering an array of cardboard designs and interactive games to go with them. It sounds strange, and it is. But it’s also awesome. And it’s coming April 20th, 2018.

Nintendo Labo has two facets: the games and the cardboard accessories. You assemble the cardboard toy, called a Toy-Con, insert the Switch parts into the accessories, and play the game associated with the item you’ve built. For something built for kids, the inner workings of the cardboard toys seem pretty complex, so adults will definitely have to be hands-on with Labo building.

The features of Nintendo Labo are sold in kits, which come with a game cartridge and a collection of flat, pre-cut cardboard pieces. Insert the game into the Switch, and follow the instructions for assembling the Toy-Cons before diving into the games. Toy-Cons vary widely. There’s a type of small RC car, a piano, a house, a fishing rod, a robot suit, and more. See some of them in the below first look trailer.

Labo really highlights the Switch’s unique capabilities and showcases Nintendo’s constant endeavor to play a different game entirely than other gaming companies. A series of DIY cardboard toys that turn into interactive gaming devices is something that could come from only Nintendo, and it seems so clever and charming.

This won’t be for every gamer out there, and that’s okay. Nintendo built Labo for a younger audience, and I think they — in addition to plenty of older players — will find the new experience rewarding in many ways.