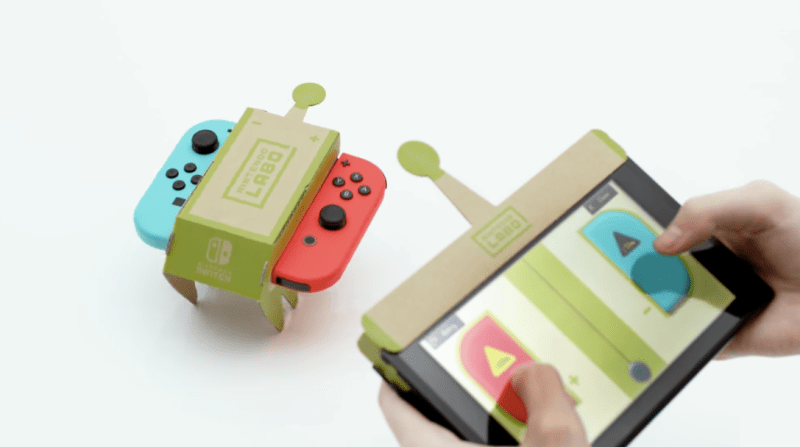 Nintendo has revealed a new feature for Nintendo Labo that will let you build and program your own custom cardboard robots. The feature is called Toy Con Garage, and it will come with Labo when it releases this April.

“When you open up the program, you can select from a number of blocks based on input options for your Switch’s controllers,” explained Kotaku, “then connect them to other blocks based on output options. For example, you can connect the left Switch controller’s up button (input) to the right Switch controller’s vibration feature (output), so whenever you press up on the left Joy Con, the right Joy Con will buzz.”

These options can be used to customize Nintendo Labo beyond the games the cardboard cutouts are designed for. By working with the building blocks, players can program existing Toy Cons — the DIY cardboard creations — to work in different ways, such as customizing the fishing rod to play music or adding in additional Joy Cons for a more complex program.

It looks like players will also be able to make their own cardboard designs and program them to work however they like. This opens up Nintendo Labo for more creative freedom than one would have simply working with the pre-made designs that come in the two kits Nintendo is selling at launch.

Nintendo did not allow press to take pictures or videos of the Toy Con Garage feature, but a reveal video should be up soon with a demonstration and more details. We’ll keep you updated with the latest news. Nintendo Labo releases on April 20th.