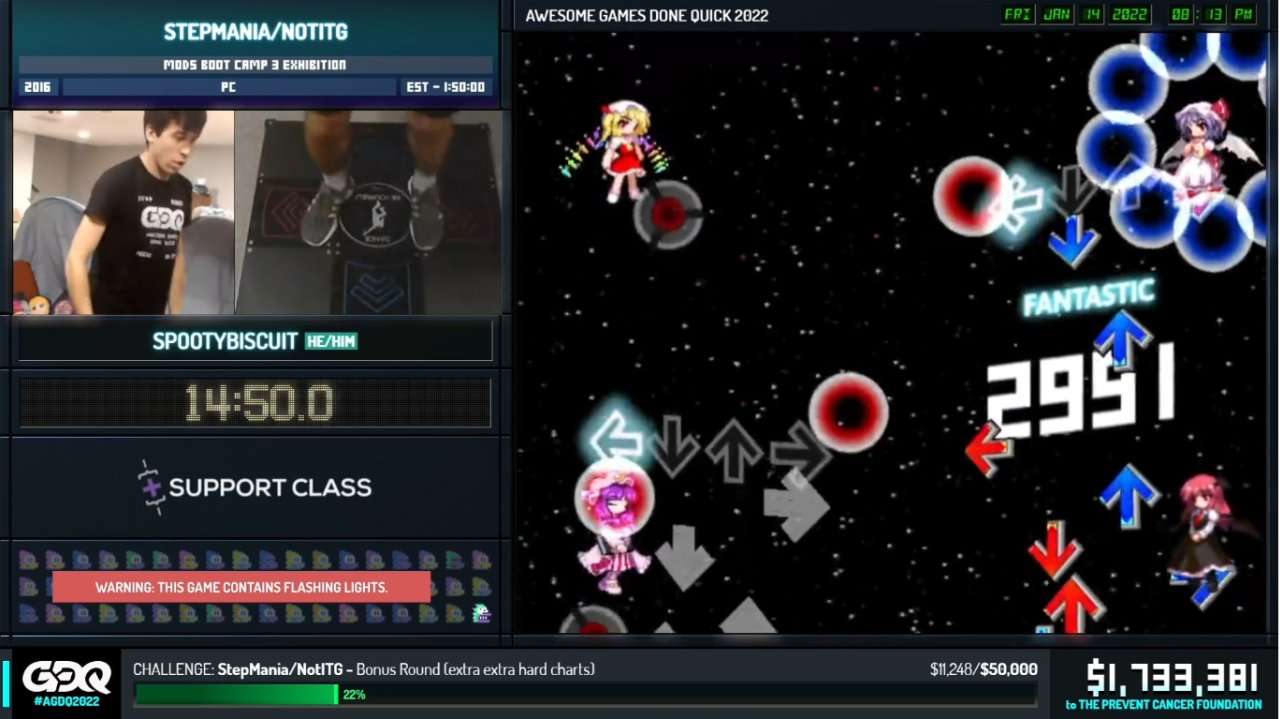 AGDQ 2022 has entered the primetime weekend stretch, quickly approaching the end of this seven day-long speedrunning marathon. There was a huge variety of speedruns scheduled throughout the day, starting with a slew of PC games that occupied the morning hours. After a lengthy Yu-Gi-Oh race, several speedrun staples made an appearance, including Dark Souls, Portal, and more. Wrapping up with some seriously impressive showcases and even more speedrun races, AGDQ 2022 day six was yet another successful 24 hours of fundraising for the Prevent Cancer Foundation. We were glued to the screen for the majority of the day, and now it’s time to pick out our favorite runs from the penultimate day of the marathon!

Please keep in mind that this is a subjective list based on our tastes, and since we weren’t able to watch the full 24 hours, there will assuredly be some fantastic speedruns that we missed. If your favorite speedrun of AGDQ 2022 day six isn’t on the list, don’t fret! This list is simply intended as a starting place for AGDQ viewing, as we recommend scrubbing through the entirety of AGDQ 2022’s offerings and watch anything that sparks your interest. To watch replays of any of the runs mentioned here, visit Games Done Quick’s Twitch channel or their YouTube channel. With that said, here are our picks for the best speedruns of AGDQ 2022 day six!

It Takes Two nabbed the Game of the Year award at the 2021 Video Game Awards, as both players and critics praised its fluid movement mechanics and unique co-op only gameplay. ItzBytez and whoishyper broke the game wide open in their “Any%” run, showing off a variety of wild glitches and seriously impressive skips. It’s always fun to watch speedruns of the newest modern games, but both runners took things up a notch by performing with consistently incredible skill. There are tons of out-of-bounds skips that require risky platforming, including some sections that must be performed blind. Both runners shined in clutch moments, staying in sync and supporting each other. If you’ve played It Takes Two casually, you’ll definitely want to check out this gem from AGDQ 2022 day six!

Marble It Up! (Full Game Classic) by Hatchet302

As the Super Monkey Ball: Banana Mania race during day two of AGDQ 2022 proved, rolling a ball through an obstacle course makes for an entertaining speedrun. This sentiment rings the same for Hatchet302’s speedrun of Marble It Up!, a marble-rolling indie game inspired by the Marble Blast franchise. Utilizing momentum and precise movement, Hatchet302 reached super sonic speeds as they rolled through a variety of winding levels. The simple concept makes it an easy to speedrun to understand, while the flashy shortcuts, skips, and jumps make it a visually satisfying watch. You should definitely check this speedrun out if you want to be impressed without investing a lot of mental energy to understand the tricks.

I Am Bread (Any%) by PootLoops

I Am Bread is an indie game that tasks the player, a piece of bread, to become a piece of toast before the time runs out. With purposefully infuriating controls, it’s a challenging game, but one that swiftly fell to the skill of runner PootLoops. Using a fun glitch that lets him fly above the danger of the level below and some interesting movement tech, PootLoops was able to put the game to shame in just under ten minutes. Quirky, short, and satisfying for those who have struggled with the game before, this run of I Am Bread is a satisfying dose of speedrun entertainment.

The Mega Man franchise has had a great showing at AGDQ 2022 so far and this run of Rockman & Forte by Amad continues that trend. Playing this Japan-exclusive Super Nintendo title, Amad braved the remarkably challenging side-scroller with style, blazing through its multiple robot bosses with speed and finesse. The speedrun route is also full of wall-zip glitches, where Amad clips Mega Man through a wall or floor, shooting him across several screen transitions and skipping major portions of the level. As big fans of the Mega Man franchise and retro speedruns in general, this Rockman & Forte showing was one of our favorite speedruns of AGDQ 2022 day six.

Dark Souls (All Bosses Race) by DanFlesh and Regole

Day six of AGDQ 2022 played host to a few more speedrun races, including this awesome “All Bosses” race of Dark Souls, the game that reintroduced difficulty into the action genre. In the race, runners DanFlesh and Regole took two different routes through the game, highlighting unique strategies along the way. Despite the difference in routing, both runners pulled off crazy glitches and swiftly killed every boss in the game, blazing a path to victory and leaving a bloody path in their wake. In addition to some tough out-of-bounds glitches, the runners also utilized stat manipulation glitches, allowing them to modify the strength of certain weapons to give them an edge in battle. While the commentary can be a bit hectic at times, we highly recommend this race for fans of the Dark Souls franchise, as it’ll break your mind in more ways than one.

Video games can often be deceptively hard, with casual onlookers underestimating the amount of skill and practice needed to master them. This is not the case for the high-level play of Stepmania/NotITG, a Dance Dance Revolution-style rhythm game stacked with community-created mods and tracks. Once you watch a few seconds of this exhibition showcase of the Mods Boot Camp 3 pack by SpootyBiscuit, you’ll have a very clear idea of just how difficult it is. Playing for over an hour straight without any breaks, SpootyBiscuit feverishly danced his way through an insanely tough playlist of modded tracks, designed to be visually chaotic and hard-to-read. At times, things are so hectic on screen, it can be abrasive on the eyes, but that’s kind of what makes it so impressive. Between the intense onslaught of cardio and the nonstop mental stimulation, it’s surprising that SpootyBiscuit didn’t collapse from total exhaustion at the end of the showcase. While it’s not a traditional speedrun by any means, this Stepmania/NotITG exhibition is definitely one of the best runs of AGDQ 2022 day six.

As the curtains closed on the penultimate day of AGDQ 2022, the marathon had raked in over $1.8 million in donations for the Prevent Cancer Foundation. Last year’s AGDQ event raised $2.7 million, so there’s only 24 hours left to close the gap if viewers want to top the previous marathon. The final day of any Games Done Quick marathon is always the most popular, so we expect a hefty spike of donations and hype in the final hours.

There’s still one day left of Awesome Games Done Quick 2022 and we’ll be covering it live on our Twitter, so stop by and say hello! We’ll be back tomorrow with our final recap, so be sure to stop by and see our picks for the last day of the marathon. Covering AGDQ 2022 has been absolutely amazing and we’re looking forward to the climactic closing day. Enjoy the speedruns and we’ll catch you at the next recap!