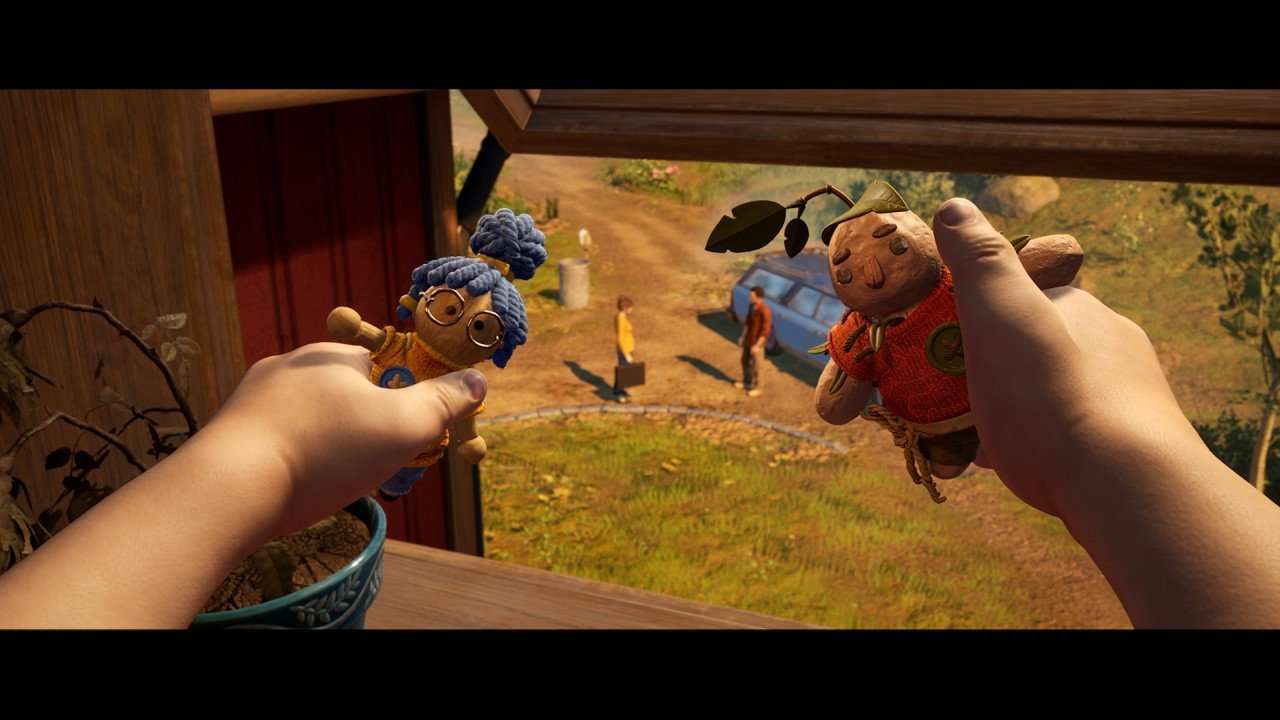 It Takes Two is the latest co-op adventure from Hazelight Studios, the creators behind the prison-break tale from 2018, A Way Out. Just like A Way Out, It Takes Two can only be played in split-screen co-op, whether online or on the couch. Together, you and a buddy must guide the troubled Goodwin family through a wondrous and imaginative journey. Playing as Cody and May, two parents who are transformed into dolls by the imagination of their daughter, it’s your job to traverse a rich fantasy world as you attempt to grow back to normal size. With satisfying platforming mechanics, a whimsical and beautiful world, and an immense amount of gameplay variety, It Takes Two sets itself apart from the rest of the pack. There’s no use in burying the lede – if you enjoy co-op games and have a pal to play with, It Takes Two is a must-play.

It Takes Two is centered around the lives of the Goodwin family – two average parents named Cody and May, raising their young daughter Rose. Though their lives seem pleasant and comfy from the outside, the family has seen better days. When we first meet the Goodwins, Cody and May are beginning to plan their divorce, convinced that the marriage has soured for good. When Cody and May attempt to gently inform Rose of their separation, she becomes emotionally distant, and hurries off to be alone. Huddled over a relationship self-help book and two hand-crafted dolls, Rose cries and simply wishes for her parents to fall back in love. Moments later, Cody and May mysteriously awaken, horrified to find themselves trapped within the tiny bodies of Rose’s dolls and left on the floor of their shed.

Seemingly transformed by the imagination and emotional turbulence of their child, Cody and May must work together to solve their newfound predicament, resulting in a wild and charming adventure. The story of It Takes Two gives off heavy Pixar vibes, feeling like a cross between the Toy Story films and the classic 1997 Disney film, Honey, We Shrunk Ourselves. Despite the fantastical nature of both the plot and the environments Cody and May explore, the characters feel grounded, believable, and natural.

Wholesome, funny, and full of zany situations, It Takes Two has a plot that could easily be adapted into a family-friendly Hollywood blockbuster. It’s not the most complex or thought-provoking story, but it’s thoroughly enjoyable and easy to get invested in. Like the best animated films, It Takes Two presents honest and effective storytelling in a vibrant and creative manner. The voice acting is impressive, the supporting characters are memorable, and the overall character development is spot-on. Although there are a few aspects of the plot that feel underwhelming, the majority of the story in It Takes Two is refreshingly fun and entertaining.

The Wild World of Miniature Parents

The premise of It Takes Two is a remarkable foundation for an exceedingly varied and well-designed adventure, spanning over 30 quality levels. As mentioned before, the game is only playable in co-op, whether via local or online play. This is made easier by the fact that only one person needs to own the game to play co-op, allowing purchasers to invite anyone on their friend’s list to join in.

It Takes Two is a 3D platformer at its core, but features gameplay sections that pull from a wide variety of different genres. For a large chunk of the game, you’ll run, double-jump, and air-dash your way across colorful, mostly linear worlds, making progress through the game’s story.

Cody and May’s adventure takes them to some exceptionally weird and quirky worlds, including a winter wonderland inside a snow-globe, a disheveled garden overrun by bugs and poisonous plants, a magical fantasy kingdom, and much more. Like the best worlds in a 3D Super Mario game, It Takes Two‘s levels are thematic and memorable, and the game never overstays its welcome in any particular area.

At the start of every new level, Cody and May are granted special abilities that must be used in tandem to solve various puzzles. In one level, Cody earns a nail gun, which can create platforms and anchors for May to swing on with her grappling hook. In another level, both Cody and May can use the power of magnetism, each possessing two halves of one magnet. Through impeccable level design and smart puzzles, It Takes Two makes great use of every new ability, providing loads of fun sequences.

The pacing of the game is also absolutely fantastic, with minimum downtime or lackluster sections. This is mostly due to the injection of gameplay scenarios that completely change the genre, which are consistently surprising and enjoyable. I won’t spoil much, but It Takes Two is far more than a simple platformer.

In one section, you engage in top-down hack ‘n slash combat in the style of Diablo, while another section feels like a Gears of War-style third-person shooter. There are also a few levels that feel like self-contained open-world adventures, encouraging you to explore and discover secrets. I also greatly appreciated a short nod to the 2D fighting genre, which is expertly timed to produce both laughs and excitement. In addition to the commendable variety of gameplay styles, there are also 25 unique mini-games to find, ranging from whack-a-mole to a fully functioning chessboard.

The Bottom Line on It Takes Two

There’s a lot to love about It Takes Two. From the charming story and characters to the abundance of different gameplay experiences, the entire game is engaging, enjoyable, and fun. For a mid-tier price game, there’s also a surprising amount of content, with a main story that lasts 10 – 12 hours. Extra replayability comes from the 25 mini-games, although some are better than others. I had an absolute blast playing through the game with my partner, working together to overcome moments of challenge. Thankfully, It Takes Two is pretty lenient with its checkpoints, and quick respawn times ensure you’ll never become too frustrated.

This makes it a great title for couples and families to enjoy together, strengthening your real-world relationships as Cody and May mend their in-game one. Due to the forgiving difficulty, robust rotation of game genres, and surplus of inventive abilities, it’s also a wonderful game to get your non-gamer friends hooked on. Overall, It Takes Two is easily one of the best co-op games ever made, and raises the bar for cooperative multiplayer gaming. If you have someone to play it with, I wholly recommend you take the leap and give it a try. Apart from some underwhelming characters and a few frustrating puzzles and platforming sections, It Takes Two is one of the best games of the year so far.