Any late comer to Skyrim would be forgiven for thinking it’s only a few years old. The graphics, story, and community still hold up strongly against newer and shinier RPGs, assuring its continued success as one of Bethesda’s most popular titles. The Elder Scrolls V: Skyrim, in reality, is deceptively old. Initially releasing in November 2011 on PC, Xbox 360 and PS3, Skyrim will be one of the most re-released games to date by the end of 2017. Spanning a staggering amount of platforms, Skyrim is as ubiquitous as titles like Resident Evil 4. With a VR adaption and Switch port coming in November 2017, Bethesda is seriously milking the success of this franchise at this point. Almost six years on, Skyrim is still one of the biggest open world RPGs on the market, so really it’s not all that surprising.

Undeniably, Skyrim is one of the most beloved games of the last 10 years. To anyone who’s a fan of the game, the fact that millions of players every year continue to dive into the elaborate (and wonderfully glitchy) world that Bethesda created should be no surprise. Although it’s understandable that people are still playing the fifth installment of The Elder Scrolls, what is shocking to me is how it still brings in enough revenue for Bethesda to justify re-releasing it on four different platforms in the span of two years. As a long-time fan of The Elder Scrolls V, I am just as guilty as the next Skyrim addict for restarting the game every few months, always managing to find something I hadn’t done before. After creating my third Nord in a row though, I’m beginning to suspect I may be the target audience for the constant re-releases. Although I can’t justify purchasing multiple copies of the game simply out of loyalty, I can at least attest to the replayability of Skyrim.

As with many great fantasy RPGs, Skyrim boasts an extensive character creator. This gives the player a huge amount of freedom over the gender, weight, race, face details, and hairstyles of their dragonborn. Naturally this makes Skyrim palatable even in successive replays, as it allows the player the opportunity to create at least 10 different characters so that you can play around with all of the race options and their special abilities. Alternatively, you can do what I always do and recreate a Nord or Khajiit for the umpteenth time, but the option is always there for more adventurous people.

Although there is no set class system in Skyrim, there are several fighting styles that the player will fall into at the start of the game without necessarily realising. In most RPGs, I tend to fall into the heavy weapon wielding tank style of play, and given the opportunity to choose it again I always do. Luckily for players like me, Skyrim doesn’t lock out skills for your dovahkiin like other RPGs, such as Dragon Age: Inquisition. This allows the player to attempt to master all different types of fighting styles during their playthrough. The main types of fighting styles available to master are heavy two handed weapons, one handed weapons, archery, and magic. Stealth can be incorporated and mastered by all play types, and is actively encouraged by offering rewards such as double damage on attack while sneaking.

Although it doesn’t seem like you would need more than one play through to master all these styles, you’d be surprised how difficult it can be to get started on a new style once you’ve already invested skill points in other talents. When I tried to learn mage skills as a two-handed sword wielding tank, I discovered that certain enemies leveled with me. This meant that I would do very little damage to my training fodder, who in turn did a great deal of damage to me. Naturally, I had to create another save file and make an Imperial mage to master magicka. This was my initial excuse for replaying Skyrim the first time. It’s a slippery slope. 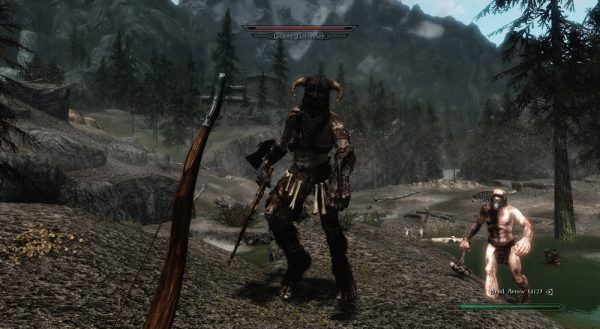 One of the best aspects of the fifth installment of The Elder Scrolls is the quests. Skyrim’s quests are ridiculous and witty at the best of times, although they do somehow always involve going into a mine and fighting draugr. Despite this, there is enough story and attention to detail in even the most repetitive quests that can keep you playing for hours on end. Not to mention the fact that you can sometimes accidentally kill someone involved in a quest and not get to finish it on your first playthrough. The main dragonborn questline is interesting enough, never mind the political turmoil and painstaking decision making involved in the Civil War quests. I still see fights online between Imperials and Stormcloaks, and the common forum asking what the “best” side is to join. I was so conflicted that I ended up making another Imperial character specifically so I could finish the Stormcloak storyline with my Nord and not feel too bad about it.

Bethesda said they have at least 3 big projects in the works before they get to Elder Scrolls VI, which seems like a good excuse to buy some time while they wait for the Skyrim storm to blow over. Any sequel they made while Skyrim is still fresh in gamer’s memories and hearts would be immediately compared to its predecessor, and most likely not in a good light. I first purchased the Skyrim Legendary Edition for PC in my first year of university, so I technically own the Special Edition as well since Steam added them to those who own the dlc and original game for free.

Although I understand why previous gen console owners would upgrade to the Special Edition on the PS4 and Xbox One, I still find it surprising that Skyrim brings in enough revenue to justify another release on the Switch. Despite the seemingly neverending hype surrounding Skyrim, I hope that Bethesda are actually working on The Elder Scrolls VI for a release sooner rather than later. For the time being, however, Bethesda seem content to ride out their Skyrim storm until the cash flow runs out.