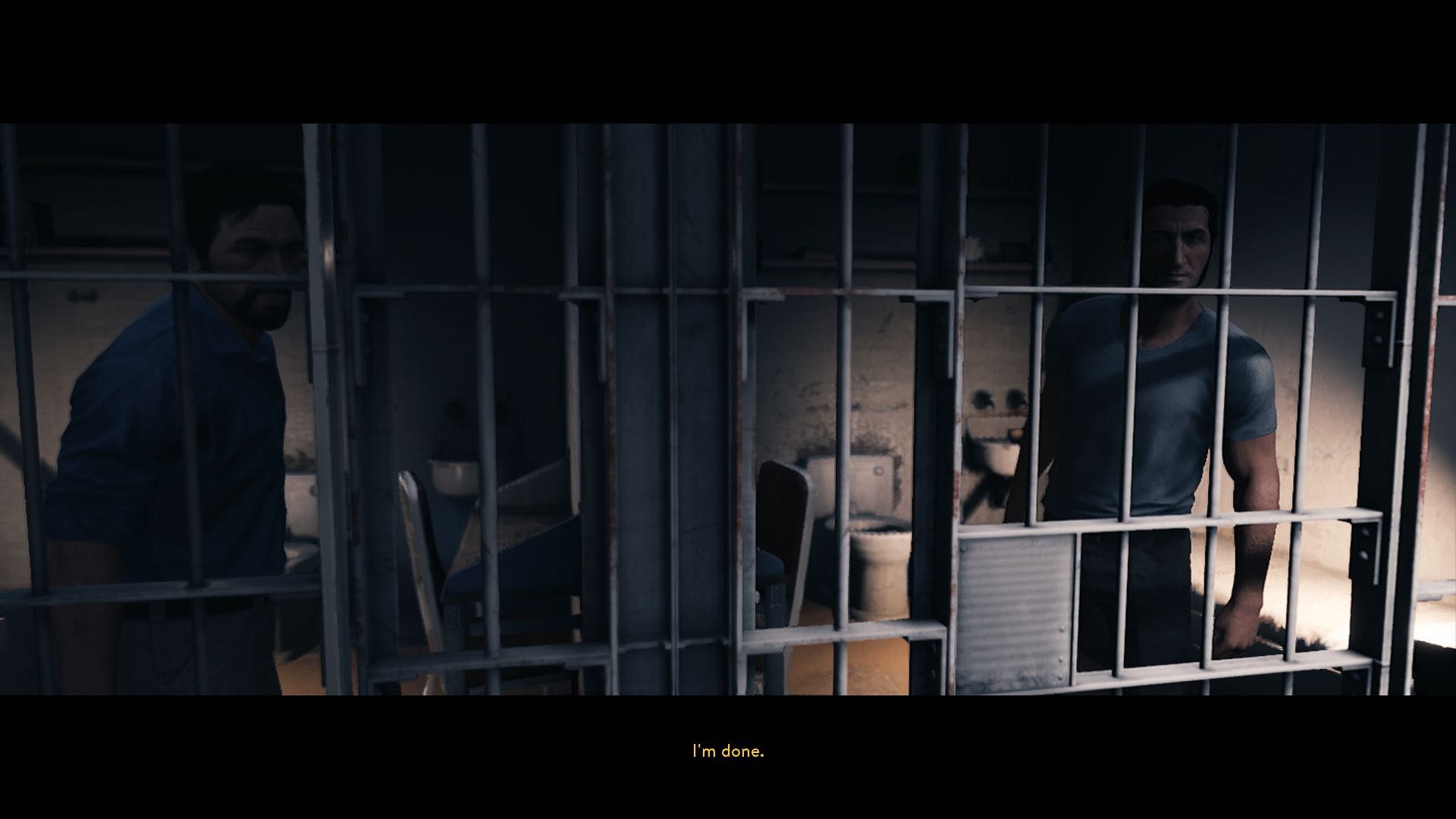 A Way Out Review – A New Breed of Cooperative Play

A Way Out tells us the story of Vincent and Leo, two men who find themselves locked up in a prison in the early 1970s.  The game is unique in that you cannot play it solo; you must complete the game all the way through with another player.  Whether online or locally, you and a friend choose a character and attempt a daring prison escape.  Prison escape stories and cooperative third-person action games might be commonplace in gaming, but what’s truly special about A Way Out is the way it tells its story.  The game forces you to communicate and work together in new and innovative ways, making it a memorable coop experience.  There are some flaws, but it’s certainly a step in the right direction for cooperative gaming.

When you start the game, you and your friend must choose between either Vincent or Leo.  Vincent is the elder of the two men; winding up in prison for fraud and embezzlement after a banking scheme gone wrong.  Leo represents the more violent and visceral sort of criminal, and when the game starts, he’s already served some time behind bars.  When you first begin the game, Leo will already be inside of the prison as Vincent first arrives on the transport bus.  This opening sequence is a perfect example of exactly what A Way Out does right; giving each player a slightly different gameplay experience while they both explore the same story. 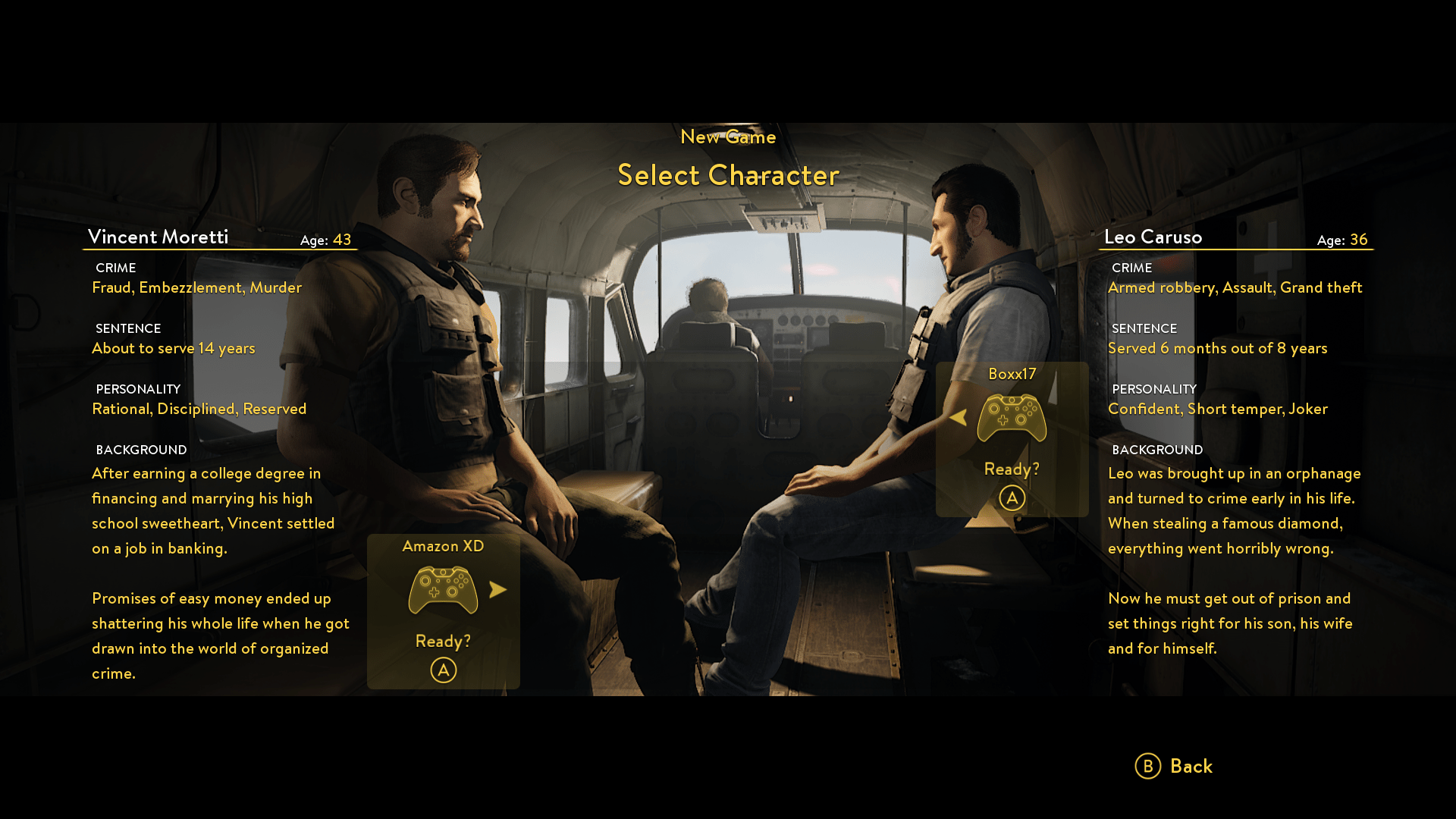 The story in A Way Out isn’t just a simple prison break, although the opening hours of the game might make you feel that way.  No, there’s quite more to Leo and Vincent’s story than breaking out of jail.  Once you’ve moved past the opening hours of the game, the experience opens up in a few different ways, providing you with different gameplay experiences and a variety of interactions.  You’re often encouraged to stop and smell the roses, as the game is littered with plenty of distractions to entertain and please.  I won’t spoil any of them here, but any time the game offered a side activity, I found the extra time spent to be well worth it.  In fact, A Way Out seems to be less about the actual story and more about the unique cooperative experience it attempts to deliver.

I enjoyed Leo and Vincent’s story as it progressed from a simple prison escape to a larger crime story.  Both characters feel fully realized, with their own motivations and backstories.  In fact, when my coop partner and I were deciding who to play as, we naturally gravitated towards the characters who more resembled ourselves.  Being the younger and louder of the two, I chose Leo, while my more intelligent and calmer partner chose Vincent.  As we played through the game, I often felt myself regarding my coop partner as not just a character in a game, but someone I needed to keep safe and help out.  A Way Out shines in that regard; building a relationship between two players that echoes the relationship on screen.  There’s an undeniable magic in the cooperation A Way Out forces you to utilize.  Whether it’s helping one another in a tough stealth section, figuring out the right things to say to gain information from other characters, or an old-fashioned gun fight, you’ll often need to strategize with your partner.  Communication is key and any duo who wants to see the credits will have to make sure they’re on the same page.

The actual narrative itself is a bit like a b-rate Shawshank Redemption.  The story hits many cliches that you have seen before in this genre, but it never stoops low enough to feel like a rip-off.  Sure, it can be a bit predictable at times, but I was still consistently surprised from beginning to end.  There’s a few really great twists and turns that will hopefully catch you off guard, and these make up for the otherwise passable story.  The memories you form with your coop partner are what will really stick with you long after the credits have rolled.  Because A Way Out feels the best when you’re playing in a social way, I highly recommend playing it locally with a friend if possible.  Online works just fine if you have a microphone, but I firmly believe the best way to experience this game is by sitting down on a couch next to a good friend.

A Way to Play

There’s a good mix of gameplay in A Way Out, although some aspects occasionally fall flat.  For the most part, you’ll work together solving minor puzzles, stealth sections, and occasional action encounters.  You always have to work together, and A Way Out does a great job making sure that one player doesn’t rule the experience.  At certain intervals in the game, you’ll have to decide between Vincent’s plan or Leo’s, and these choices change up the way the scene plays out.  The two characters are vastly different in their approach to problems; Leo is hot-headed and “guns a-blazing”, whereas Vincent is more calculated and reserved.  It was fun exploring the dynamic of these two characters, and it was even more fun seeing how the characters reflected on how we played and experienced the game.  Although I was playing as Leo, I couldn’t help but side with Vincent on a few things. 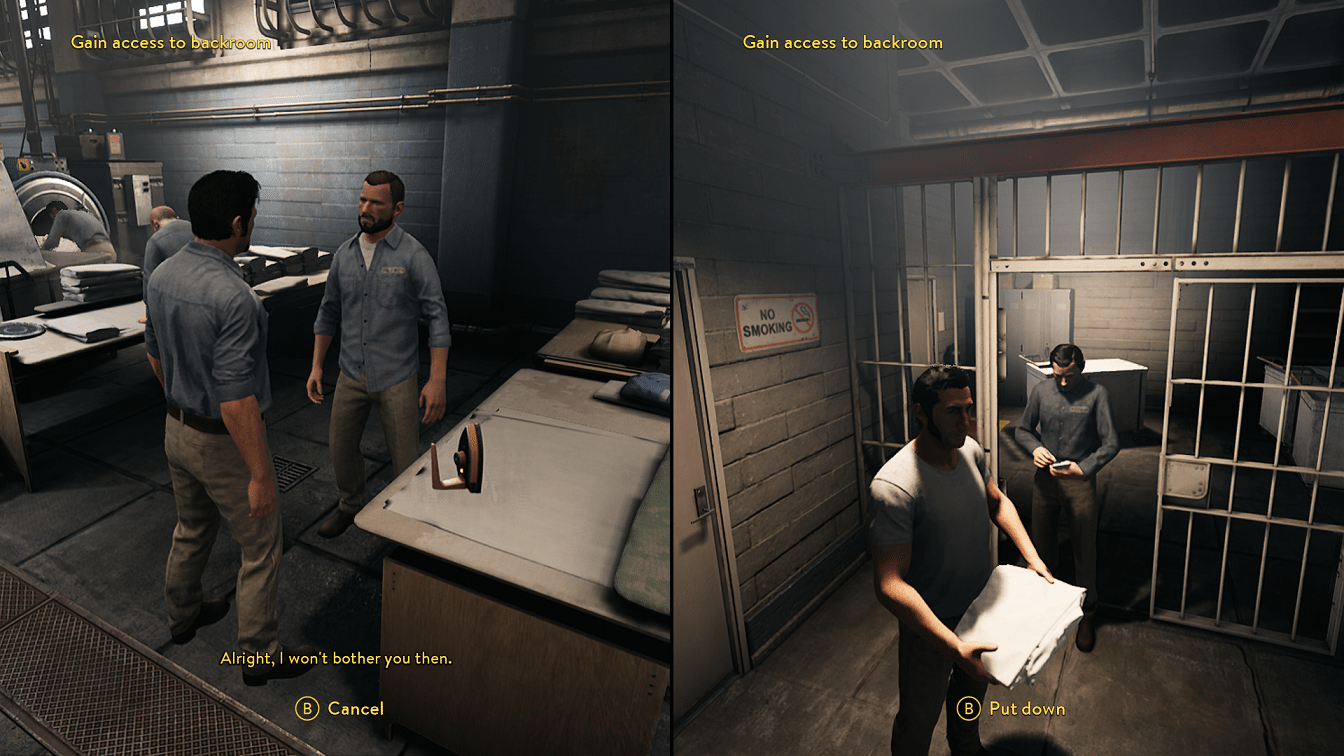 The most striking aspect of A Way Out is how it handles its split screen presentation.  Unlike most split screen coop games, A Way Out will change the size of either players’ screen at different times.  Since both players are often doing completely different things in the same area, A Way Out organically pulls your focus from one screen to the other.  For example, if something important to the story happens on Vincent’s screen, it might expand and take up more than 3/4ths of the entire television.  The game also uses this effect to great cinematic success, sometimes even adding in a third or fourth perspective to show you important information.

The cool presentation comes at a cost though, as A Way Out can sometimes look blurry and oddly grainy around character models.  It’s a decent looking game at its $30 mid-tier price point, but in comparison to something like Senua’s Sacrifice, it might seem lackluster.  The game doesn’t really strive for an ultra-realistic style, so that eases things a bit, but I couldn’t help feeling a bit disappointed in the visuals from time to time.

The Bottom Line on A Way Out

A Way Out is a decent adventure that plays out in a remarkable way.  Its “coop only” attitude is further strengthened by the numerous inventive ways it tells a story.  Although the gameplay can be underwhelming at times and the visuals a bit murky, I never got bored thanks to the engaging presentation.  The narrative is arguably lackluster, but I enjoyed getting to know both of the lead characters and was surprised with the way their story played out.  If you have a coop partner who is willing to sit through the 5 to 7 hour story with you, I can fully recommend the game even with its flaws.  It may not be perfect, but A Way Out is one of the most unique cooperative experiences I’ve had this generation.  I hope that many developers will look at director Josef Fares and his team at Hazelight Studios, and pick up a few pointers.  A Way Out might be a story you’ve seen before, but you’ve never seen it told like this.