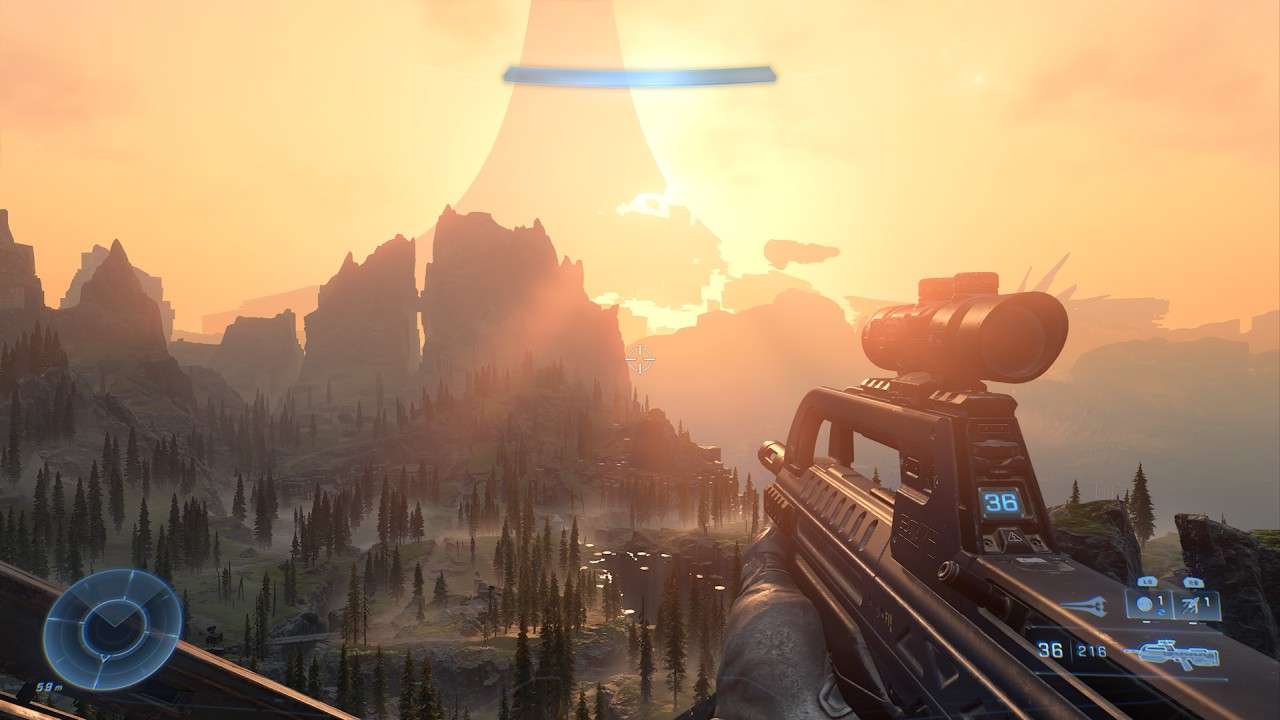 Halo is one of the longtime kings of the FPS genre, revered as a groundbreaking franchise that established the foundation on which modern shooters are built. The last game in the series, Halo 5: Guardians, was released way back in 2015 to mixed reception. With a legacy bigger than most other mainstream franchises and a six-year hiatus between installments, Halo Infinite has a lot to live up to. From the glorious return of competitive multiplayer to a climactic story campaign that pits Master Chief against a fearsome threat known as the Banished, the game promises an explosive shooter experience that combines classic Halo gameplay with modern mechanics. Is Halo Infinite the epic title that fans have been waiting for, or is this yet another big-budget sequel that fails to live up to the hype?

The Banishment of Zeta Halo

As the sixth entry in the main franchise, but the first Halo game on the Xbox Series X, Halo Infinite tries to balance a long history of lore with approachable storytelling for newcomers. The game’s story campaign is set after the events of Halo 5: Guardians, with Master Chief sent spiraling into the depths of space after losing a fight with the leader of the Banished, Atriox. Kept alive by his super suit’s survival mode, Master Chief is rescued six months later by UNSC pilot Echo 216, who insists that humanity is losing the war against the Banished and the rogue AI, Cortana. Perked up and ready to kick some alien ass, Chief and Echo-216 travel to the Zeta Halo, a damaged ring-world occupied by Banished forces. Convinced that the Banished are searching for something of great importance on Zeta Halo, the Chief makes it his duty to reclaim the ring for humanity, with a new AI companion named Weapon along for the ride.

The Zeta Halo itself is a big story element in Halo Infinite, with remnants of humanity’s brutal war against the Banished scattered on the surface of even greater mysteries. To emphasize the importance of exploring the ring, a major portion of the game is set in an open-world structure, similar to Ubisoft games like Far Cry 6, but in a much more limited fashion. While most of the major story missions are linear and take place in labyrinthian underground buildings, you’ll glean a lot of information about the world by searching the map during downtime, recovering audio logs, and taking down Banished outposts. Because of this, many of the most memorable moments of Halo Infinite‘s campaign will come from the personal adventures you have while exploring, not the story itself. When compared to the more cinematic campaigns of previous Halo games, that could feel like a downgrade for some fans, but others might prefer the more environmental storytelling.

It’s a good thing that exploring the Zeta Halo provides a rich sense of atmospheric storytelling, because the actual plot leaves a bit to be desired. The main villain, a Brute named Escharum, is plenty intimidating, but spends most of the game yelling at you through holograms rather than showing off his power. In general, there’s a lot of exposition and dialogue instead of cutscenes or set-piece moments, with your AI companion informing you about everything along the way. Thankfully, the voice acting is fantastic, with hefty emotion from all cast members. Unfortunately, the core plot feels somewhat retreated and anticlimactic. There are some interesting story beats and nuggets of awesome science fiction littered throughout, but I felt slightly disappointed by the end credits. It’s not a bad story by any means, but with Halo Infinite being billed as the last standalone entry in the franchise for the foreseeable future, I expected a more satisfying send-off.

I Need a Weapon

Luckily, Halo Infinite is an absolute blast to play, with the raw gameplay picking up the slack of the story. In both the linear story missions and open-world activities, the action feels incredibly satisfying, thanks in no small part to the addition of a grappling hook. In terms of video game grappling hooks, Halo Infinite‘s is near the top of the list, unlocking blissfully fast movement and tons of combat opportunities. You can grapple discarded weapons or fusion coils and use them on enemies, swing from great heights without worrying about fall damage, or make a quick escape when your shield runs out. The grappling hook isn’t the only new piece of equipment in the game, with Master Chief earning a thruster pack, deployable shields, and a threat sensor as well.

These four pieces of equipment can be upgraded by spending Spartan Cores, found scattered around the map and during missions. Upgrading is a must, as enhanced equipment offers quicker cool-down times, passive bonuses, and more. For example, after upgrading your thrusters a few times, you’ll temporarily turn invisible after using them, giving you time to advance or retreat without being spotted. When you’re not hunting for Spartan Cores or picking up audio logs, you can engage in a handful of open-world activities, including rescuing UNSC marines, blowing up propaganda towers, hunting down high-value targets, and more. As you successfully complete these blips of interest around the map, you’ll earn Valor, which adds new weapons and vehicles to pick up at fast-travel points.

Although the open-world structure of Halo Infinite sounds weird at first, it works surprisingly well with the franchise’s expansive and quirky combat, affording a feeling of power akin to DOOM. Banished troops routinely patrol the map or hang out in large groups, waiting for Master Chief to beat them to a pulp. From the lowly Grunts and sword-wielding Elites to the heavily-armored Hunters and sniping Jackals, each type of enemy in the Banished army feels distinct, with the stronger ones requiring some strategy to take down. Fortunately, there’s an equally diverse arsenal of weapons to fight with, including fan-favorites like the Battle Rifle and Energy Sword, as well as new guns like the Skewer, Stalker Rifle, and Ravager. Overall, Halo Infinite‘s campaign mode is consistently entertaining and never stops being fun, as long as the bullets are flying. There’s a wealth of opportunity when it comes to player expression through combat, and some of the new mechanics (like the grappling hook or fusion coil-throwing) never get old.

As expected with any major Halo game, Infinite includes a competitive multiplayer suite, featuring both deathmatch and objective-based modes. You can queue up for online competition in social playlists like Team Slayer and Big Team Battle, test your skills in the ranked arena, or enjoy custom matches with your friends. Like most other modern online multiplayer games, there’s a paid battle pass with a slew of cosmetic items to earn, as well as an in-game store where you can spend real money on premium skins. Best of all, the entirety of Halo Infinite‘s competitive multiplayer offerings are completely free-to-play, so you can try it out without dipping into your wallet.

Generally speaking, the multiplayer aspect of Halo Infinite delivers the kind of exciting and addictive gameplay that earned the franchise its initial acclaim. Gunplay feels just as good here as it does in the campaign, with the new equipment items adding a fun variable to game flow. It’s tons of fun to grapple-hook around the map and out-play your opponents or earn multi-kills with the devastating power weapons. The robust arsenal of weapons is also immensely well-balanced, with each gun capable of delivering swift death if used properly. Halo Infinite also features AI-controlled opponents, allowing you to practice against bots in custom matches. While Halo 4 and Halo 5: Guardians were fun to play in their own right, Halo Infinite is easily the best effort put forth by 343 Studios when it comes to multiplayer gameplay.

Despite the immense quality of the moment-to-moment action, there’s plenty of room for improvement in other areas of multiplayer. At the time of writing, online or local campaign co-op is completely absent, although the developers plan to add it to the game sometime in early 2022. The list of maps is also pretty slim, with only 10 arenas in rotation, with no classic/remixed maps at all. There’s also no Forge mode yet, so you can’t make your own maps in the meantime. As an added annoyance, the paid cosmetics are overpriced and the first season’s premium battle pass is pretty underwhelming.

Most of these problems can be fixed with quality updates, but for now, things feel a bit barren. New matchmaking playlists have already been introduced during the launch window, so we’re confident that updates and refinements will continue, but it will probably take several months until things are fleshed out. Even with all that considered, Halo Infinite‘s multiplayer is impressive and incredibly replayable, with a solid foundation and room for growth.

The Bottom Line on Halo Infinite

Halo Infinite might have a few flaws when it comes to the narrative, but it contains some of the most refreshing and enjoyable gunplay ever seen in a Halo game. After the slew of open-world action games that have been released in the past few years, the move toward a non-linear game structure might feel uninspired, but it works wonders with the large-scale nature of the gameplay. While some might find the open-world activities repetitive, I had a blast clearing the map, defeating high-value targets and finding hidden skulls along the way.

The multiplayer is arguably the highlight of the experience and thankfully, it’s free-to-play, opening up the floodgates for new players. After a bumpy launch period, some of the rough edges have been smoothed out, but there’s still some room to improve. With that said, we’ve still found it easy to spend dozens of hours in the online battlefield, blazing through opponents and partying up with pals for nostalgic yet modern gunfights. Whether you’re new to the Halo franchise or have played every single entry, we recommend Halo Infinite wholeheartedly. Despite some issues with the story and the sparsity of content in multiplayer, Halo Infinite provides some pure FPS fun and generally lives up to its lofty expectations.