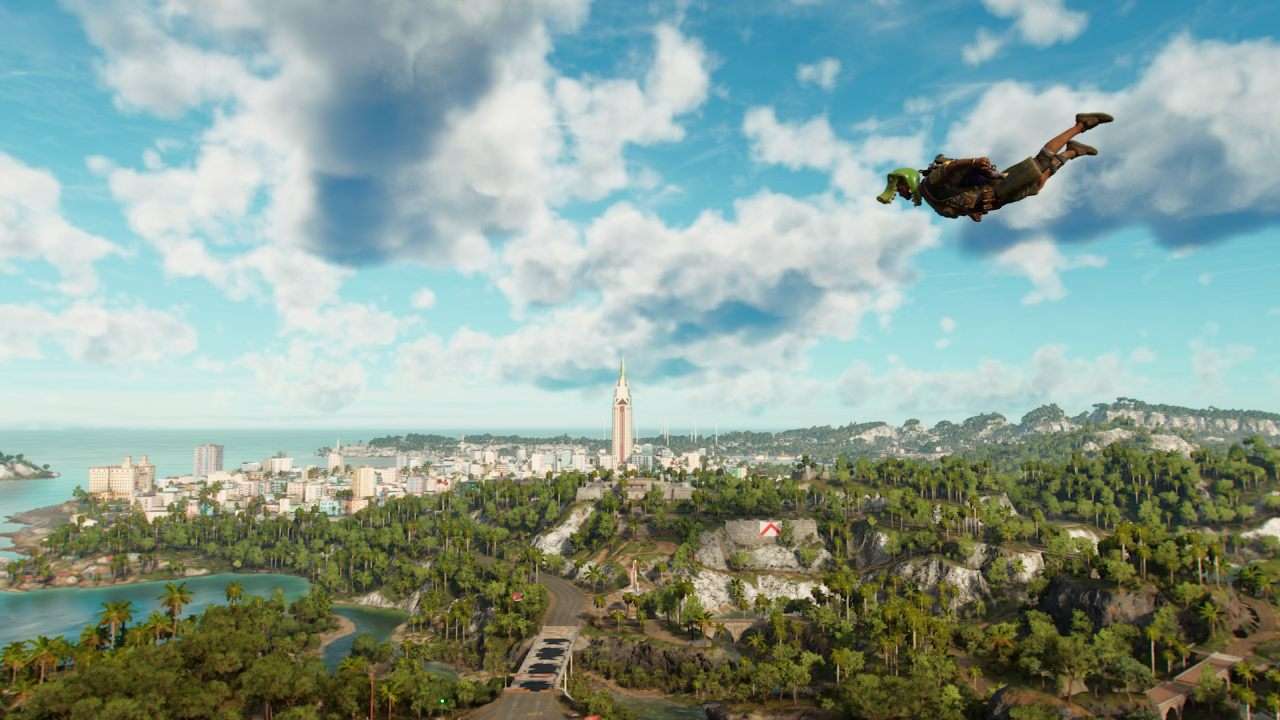 Far Cry 6 is another entry in Ubisoft’s long-running first-person shooter franchise, often pitting players against a power-hungry madman on a wide-open, exotic map. After diving into the world of doomsday-fearing cults in Far Cry 5‘s Hope County, Far Cry 6 whisks us away to Yara, a lush fictional Caribbean country entrenched in military oppression at the hands of their crazed fascist leader. Playing as a new recruit in the local resistance, you’ll battle against your militant subjugators on a mission to liberate the land. With a bigger focus on scavenging, equipment, and gameplay freedom, Far Cry 6 returns to its tropical roots and lets players go wild. However, it doesn’t do much to drastically change the formula, providing a similar experience to previous Far Cry games. Despite this lack of overall innovation, is Far Cry 6 still worth checking out? Let’s see if this sixth mainline entry can keep the Far Cry brand alive!

In Far Cry 6, you play as Dani Rojas, a citizen of Yara who attempts to flee the country when the tyrannical leader Anton Castillo begins to enslave locals for his insidious cancer-curing drug production. Playable as a female or male character, Dani is one of the first speaking protagonists in the Far Cry franchise, a nice change of pace from previously silent leads. When their escape plan is interrupted by Castillo himself, Dani washes ashore on the Yaran mainland, confused and bereaved. Soon after, they fall in with a local rising group of freedom fighters known as Libertad, agreeing to help with their movement in exchange for passage off the island. However, after witnessing the cruelty and violence of Castillo’s military regime, Dani trades his dreams of escaping to America for a life of rebellious warfare as a bonafide guerrilla.

Like in Far Cry 5, Dani’s mission to overthrow Castillo requires recruiting local pockets of resistance, taking down the dictator’s loyal officers, and generally causing chaos around the island. Played by Giancarlo Esposito, best known for his role as Gus Fring on Breaking Bad, Anton Castillo is a ruthless leader with no empathy for those beneath him, employing genocide, slavery, and an assortment of other despicable acts to retain his power. Trailing behind Anton every step of the way is his young son and future President of Yara, Diego. Unlike his father, however, Diego sees a potential for a harmonious and peaceful future, creating an interesting dynamic between the two. Unfortunately, both Anton and Diego only appear from time to time in the story, often in brief, self-contained cutscenes at pivotal plot moments. Since most of your time is spent exploring the rural regions of Yara, far removed from Anton’s fortified home, the majority of the narrative deals with the various smaller rebel factions who are struggling to survive.

Overall, the narrative in Far Cry 6 takes a while to get going, but becomes increasingly more interesting as you meet new characters and become entwined in their problems. There are three main groups that Dani must recruit into Libertad, each with a diverse cast of personable characters. Surprisingly, many of these supporting characters are the most memorable of the bunch, including aged freedom fighters from past revolutions, a rambunctious hip-hop group, and an explosives-loving engineer who always has a trick up his sleeve. When compared to the silent protagonists of previous Far Cry titles, Dani is also a notably affable main character, who I felt more and more attached to as time went on. Generally speaking, whenever the main plot surrounding Anton and Diego Castillo falters, the secondary stories and their focal characters shine through, resulting in an immersive and emotional tale of rebellion in the tropics.

Freeing Yara, One Operation at a Time

The mainland of Yara is split into four major regions: the tobacco farmlands of Madrugada in the northeast, the extensive yet populated Valle De Oro in the center, the rich jungle of El Este in the southeast, and the oppressive capital city of Esperanza at the very top. To topple Castillo’s regime and retake Yara, you’ll have to explore all four of these regions, completing missions along the way. Each region has a pocket group of rebel fighters to recruit, with a long list of story missions to offer. These main missions are often exciting and explosive, featuring some fantastic set-piece moments in self-contained areas. You can take on these regions in any order you choose, providing a nice sense of freedom.

Like in past Far Cry games, a lot of your downtime will be spent liberating military outposts, capturing enemy convoys, and taking down the new anti-aircraft facilities which prevent flight over certain areas. However, Yara is a beautiful place with interesting topography and exploring it remains remarkably engaging. Fights between friendly guerrillas and military soldiers occasionally break out organically, further immersing you in the oppressive atmosphere. When tackling any open-world activity, a great amount of freedom is granted, allowing for both brute force and stealthy play.

That said, my favorite missions in Far Cry 6 are the treasure hunts, which are similar in structure to Far Cry 5‘s prepper stashes. You’ll often pick up rumors of hidden treasures while collecting documents and notes, or stumble upon them randomly, kick-starting a brief adventure in pursuit of precious gear and goodies.

Treasure hunts are almost always focused on environmental exploration and puzzle-solving, including a dive into a blue hole cave system, flying alongside a trusty pelican, and even hunting down a trio of mysterious relics. While blowing up Castillo’s minions and causing mayhem is fun in its own right, there’s something exceptionally entertaining about hunting for treasure on a verdant tropical island.

As in previous entries, you’ll gain experience points for completing missions and side activities, which increase your overall rank. However, Far Cry 6 swaps out the usual perk system for gear sets, with new pieces of gear becoming available as you level up. Each piece of gear has an associated passive or active ability, such as increased movement speed, enhanced damage, and more.

By replacing perks with unique gear, Far Cry 6 encourages you to mix up your playstyles on the fly and experiment. This is further reinforced by the “Resolver” weapon modification system, which allows you to add scopes, various ammo types, and stocks to your amassed arsenal. There are also unique Resolver weapons that can be purchased from special vendors, including a CD player that launches shrapnel, a nail gun, and more.

Far Cry 6 also introduces devastating ultimate abilities in the form of Supremos; powerful backpacks that imbue Dani with battle-altering attacks. The default Supremo unleashes a barrage of homing rockets, but you can buy others that better fit your playstyle. Some Supremos are better for tactical play, providing EMP bursts, advanced healing, and more. Supremos also have four gadget slots, which you can fill with a variety of offensive and defensive items, including healing syringes, frag grenades, and even automated turrets.

If you need assistance on the battlefield, you can also enlist the help of a few animal partners called Amigos, ranging from a vicious crocodile named Guapo to a puppy in a wheelchair called Chorizo. Each Amigo provides a distinct avenue of assistance, with some marking enemies for stealth attacks, distracting guards, or taking down enemies on their own. Each Amigo is intriguing enough to try out, but depending on your preferred method of attack, you’ll likely find a favorite and stick with them. That said, it’s hard to deny just how adorable these animal pals can be.

A Place to Call Home

As you explore the vast island of Yara, you’ll often come across crafting resources that can be collected for later use. In addition to upgrading your weapon, crafting resources can be used to upgrade one of the several guerrilla camps located around the country. Extra buildings can be constructed, unlocking helpful new items and merchants. For example, building a fishing or hunting hut provides you with better gear and maps that point out prime hunting spots.

You can also enjoy some leisurely side activities at guerrilla camps, including the cheeky but enjoyable rooster battle mini-game, which plays out like a 2D fighting game. With simple controls, you can dodge and attack your opponent in these entertaining animal battles, gaining some fun loot along the way. There’s a surprisingly extensive roster of unique rooster fights to unlock as well, which can be located around Yara or earned from completing missions. If cockfighting isn’t your thing, you can always engage in an exciting match of dominoes instead, or send out recruits on passive Bandido Missions for extra rewards.

There are also self-contained challenge missions called Special Operations to play, which award you with a rare currency to spend on items and weapons. These missions play out in open-ended areas separate from the main map, where you must extract a dangerous chemical compound called PG-240X. Whether solo or with a friend online, you’ll work your way through some fun environments while managing the heat-sensitive PG-240X, which heats up while in direct sunlight. Like a game of hot potato, you’ll have to find shade or water spouts to cool down the compound while holding off enemies and making your escape. Although there are only a few Special Operations available at first, they’re fun standalone missions that offer a good level of replayability.

The Bottom Line on Far Cry 6

Overall, Far Cry 6 is a sequel that encourages player expression through free-form gameplay, adds some interesting new mechanics, and provides an engaging world to explore. The story is decent enough, with a compelling main antagonist that deserved a bit more screen time. Luckily, the smaller story arcs centered around the supporting cast are surprisingly well-written, with some awesome set-piece missions to keep things exciting. Yara is a fun and evocative place to immerse yourself in, where plenty of fun diversions await. Even after you’ve completed the main campaign, there’s still fighting left to be done. Depending on how thorough you are with liberating Yara and engaging in all its side content, Far Cry 6 offers anywhere from 25 to 50 hours of FPS fun.

That said, if you’ve grown tired of the Far Cry formula, Far Cry 6 doesn’t exactly reinvent the wheel. You’ll spend a lot of time gunning down nameless baddies, liberating small sections of the map, and working your way to the top of the freedom fighter food chain. However, those who enjoy the over-the-top action and signature elements of previous Far Cry games will feel right at home. While it starts off a bit slow, you’ll quickly become enveloped in the fight to save Yara from the deadly grip of Anton Castillo. As far as open-world first-person shooters are concerned, Far Cry 6 is a success and worth checking out if you’re a fan of the genre.