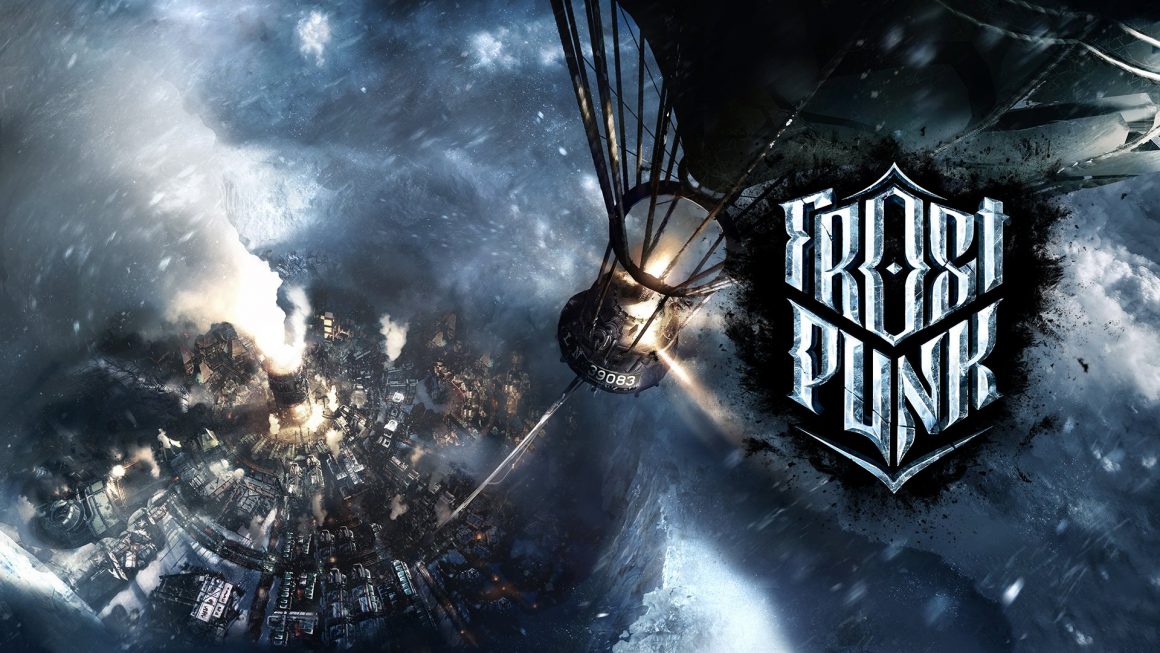 Developed by 11 Bit Studios, the makers of This War of Mines, Frostpunk is a grim city survival game set in a post-apocalyptic frozen Britain. It’s a game all about tough choices, deliberately introducing difficult situations to make the player question their morality. 11 Bit Studios describe themselves as being: “devoted to creating and publishing meaningful games able to leave a strong mark on widely understood popculture,” and based on my experience with Frostpunk, you can definitely tell. With this motive in mind, Frospunk is a suitably bleak but enthralling survival game, designed to make the player question their own morality and puts their survival skills to the test. Retailing at £24.99 GBP or $29.99 USD, the game was released on Steam on the 24th of April this year. While comparable in mechanics to city builders such as Cities Skylines, Frostpunk manages to stand out and create a very memorable and challenging game.

Frostpunk shares similar mechanics and UI to other city building sims, including building placements, population control, and keeping up with the needs of the citizens. Not only will players have to maintain the energy and food supplies of their city, but they also need to make sure their citizens’ will to live is strong in order to create a thriving and surviving city. One small mistake in resource management could mean game over, as being unprepared for the cold, or not having enough resources stocked up could mean the difference between your city thriving or collapsing. Knowing this, the game can be quite tense, and I found myself very hesitant with the speed up button, fearing that if I played on the maximum speed then I would miss something or not utilise the working day as much as I would need to. The controls can be a bit intimidating at first, as the tutorial only tells you how to work certain aspects of the game at a time, but after a bit of trial and error, you can get to grips with the UI pretty quickly. 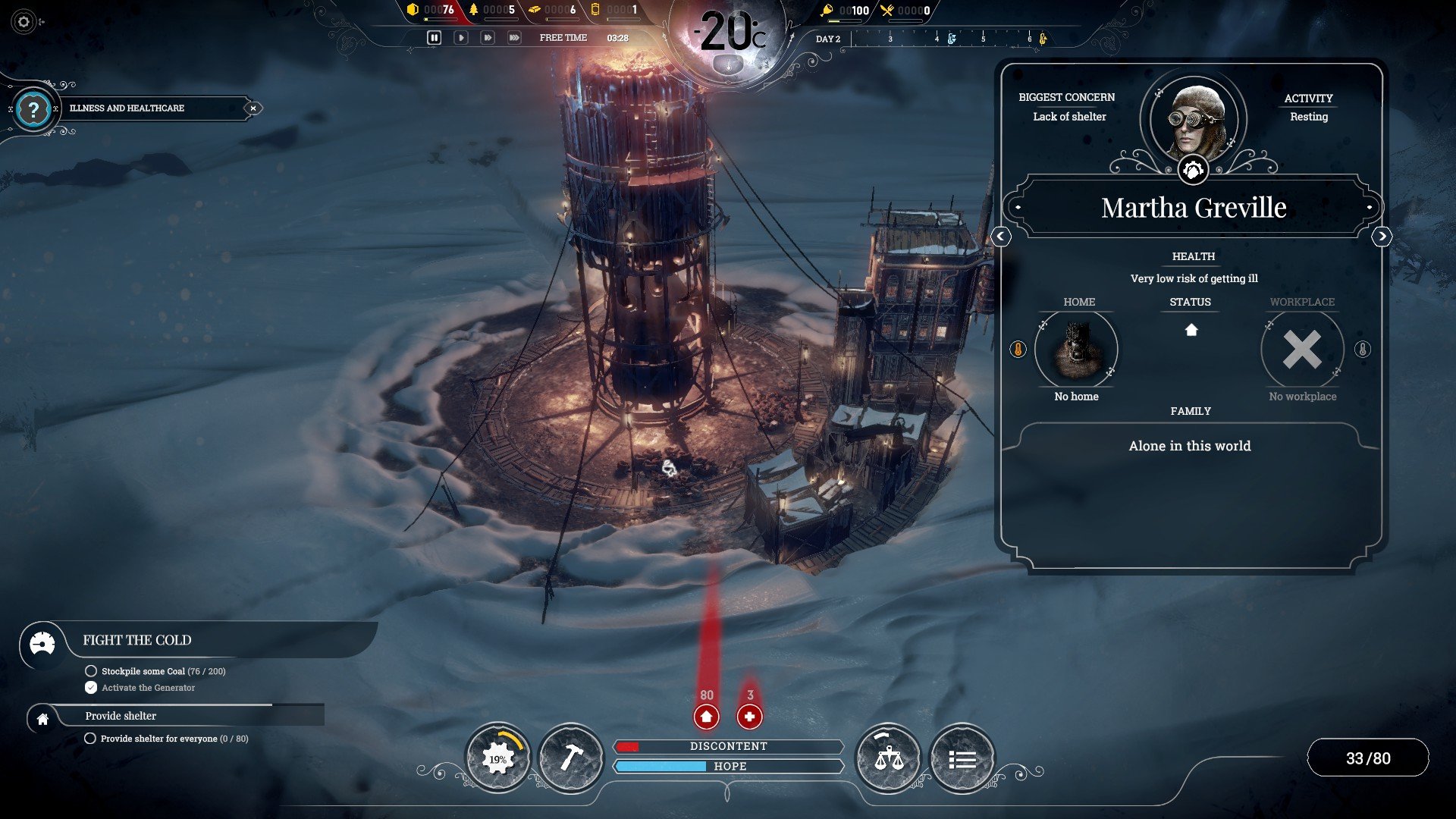 A huge part of Frostpunk is preparing and managing your resources. Your city will run entirely on steam power, and so coal is the biggest resource that players will need to stock up on and keep in store for the long nights and temperate fluctuations. Along with coal, steel and wood are necessities to building and expanding your city, without which your citizens will become very discontent with the progress and development of the city. Gathering these resources seems pretty simple at first, as the game gives you a seemingly generous amount of deposits for the first few days. Beyond that, however, it’s up to the player to manage storage and gather enough resources to prepare for illnesses, disasters, and other such times when workers are unable to work. The buildings that the player can place also impact the success of the city, such as keeping enough housing to satisfy the population and making sure there are enough buildings to satisfy the needs of the population. Citizens will often request specific buildings to be built within a certain amount of time, requests which will either boost their hope or raise their discontent depending on how well you fulfil their desires.

Of course, resources are only half of the struggle when it comes to keeping your Frostpunk city thriving. Along with providing your city with power and resources, players also have a ‘hope’ and a ‘discontent’ bar which indicates how successful your city is. Without hope, the citizen’s will to live will decrease drastically and end up causing quite a few issues for those wanting to create a thriving city, with the population dying or refusing to work as a result. These bars are influenced by how satisfied the citizens are in general, but are more directly affected by the decisions you make as a player. Introducing laws and developing certain industries all have strong pros and cons, meaning that you’re more likely to choose the least damaging decision and face somewhat lesser consequences than others. Frostpunk is specifically designed to make you reevaluate your moral compass and forces you to make some pretty tough decisions. There are genuinely few good decisions in this game, and I actually really enjoy that aspect of it. Seemingly easy decisions always have cons to them as well, meaning something as simple as choosing to invest in graveyards means that you will have fewer workers, and as a result fewer resources. There really doesn’t seem to be easy choices, and each decision you make will leave you with a strong bitter taste once it’s too late to turn back. This aspect of Frostpunk is very reminiscent of This War of Mine, as you have to sometimes make some pretty awful choices if you want your city to survive.

Ultimately, Frostpunk is a bleak survival strategy game which forces players to weigh up the consequences of their own decisions as well as testing their strategic thinking. The grim atmosphere and weight of the decisions that Frostpunk creates make for an intriguing and engaging game that you can easily sink hours upon hours into. Definitely not for the fainthearted, the survival strategy game combines all of the seriousness of This War of Mine, with the nuances and mechanics of old school city sims such as Pharaoh or Cities Skylines. Although not a light-hearted game, Frostpunk deals with real moral dilemmas in a way that is equally rewarding and punishing for the player, where quite often the best decision is the lesser of a lot of evils, and your very moral compass is constantly brought into question. While the sombre undertone of Frostpunk can be very heavy to deal with at times, for those who can invest time and effort into learning the mechanics and best strategies, this game is well worth the investment.