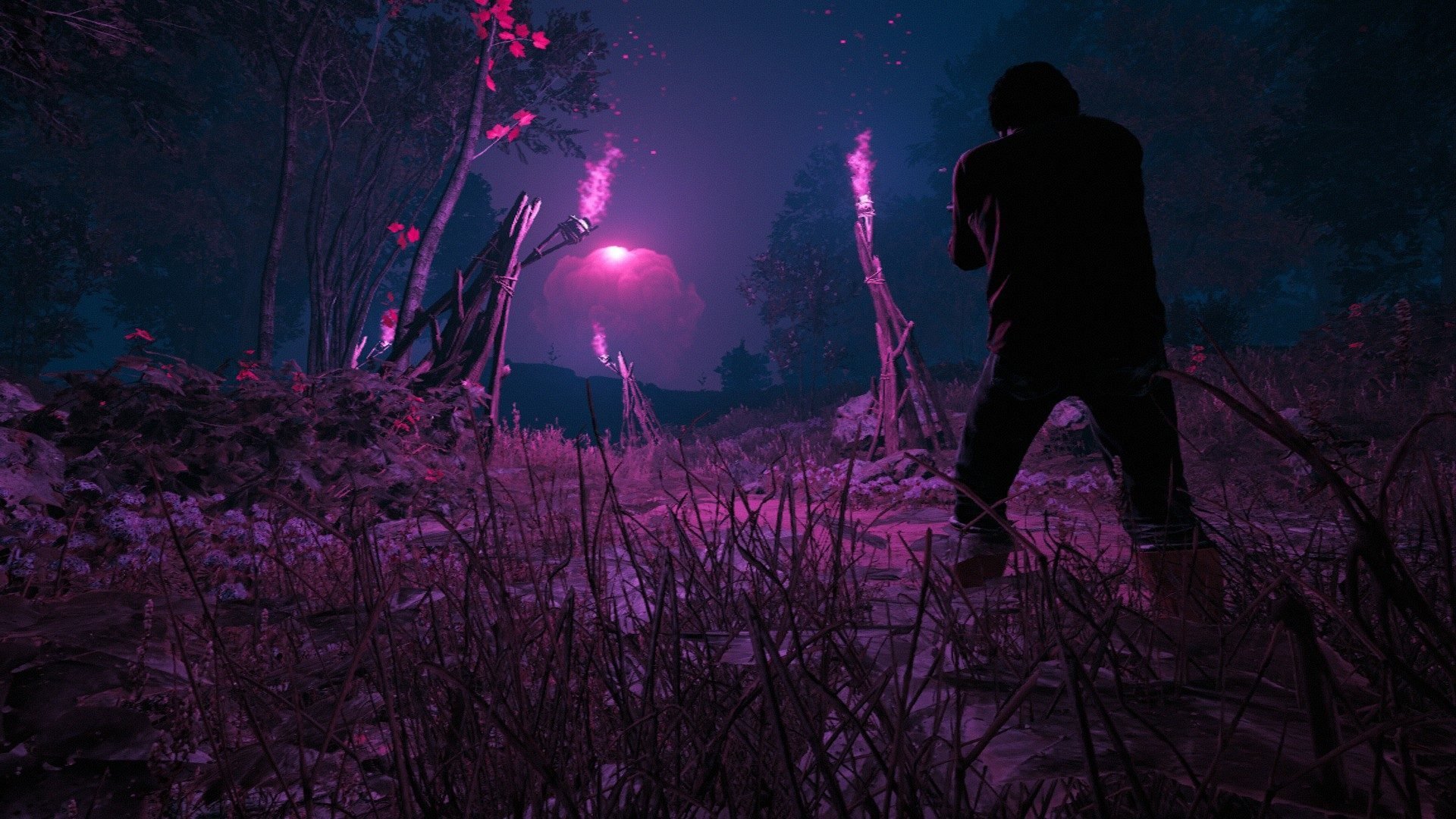 Far Cry New Dawn is a spin-off of the 2018 sequel, Far Cry 5. Like Far Cry Primal before it, Far Cry New Dawn reuses the previous game’s map (for Primal, it was Far Cry 4‘s map), and re-purposes it for a new world and story. Although the topography and terrain are familiar, the slightly altered gameplay loop provides a new but similar Far Cry experience. You’ll spend a lot of time exploring beautifully lush nature environments, blasting everything in sight with your favorite weapon. This time around, resources are scarce and the world is worse for wear, but your objective remains the same as before. Reclaim the Montana countryside of Hope County for those who wish to rebuild it, while eliminating those who wish to exploit it. Far Cry New Dawn has released as a mid-tier priced product, but does it deliver a big budget experience? Let’s find out if Far Cry New Dawn is a rehash or a reimagining. 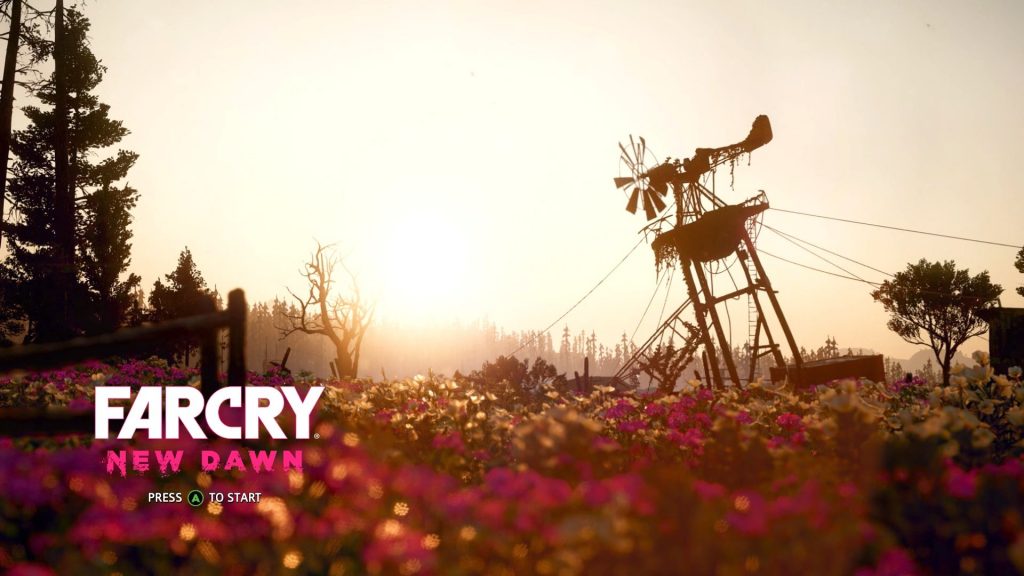 Note: There’s no way around it; this review will contain spoilers for Far Cry 5. If you haven’t finished that game, some story points will be spoiled here.

New Dawn takes place in Hope County, approximately 17 years after the end of Far Cry 5. At the end of that game, cultist and prophet Joseph Seed’s visions of the future came true. Nuclear bombs erupted around the country, forcing survivors to live underground. On the surface, nature has fiercely reclaimed the area in a super boom of life and vegetation. It’s been a while since humans resurfaced and tried to rebuild; long enough for the uglier side of humanity to rear its head. Players assume the role of Captain, a customizable soldier attempting to survive in the new world. After an early run in with a gang of bandits known as the Highwaymen, the Captain is forced to recuperate and then load up for some revenge. On the surface level, it sounds like a cross between Fallout and Far Cry, and while that’s not completely off-base, the story and game are still firmly based on the Far Cry side of things.

In the ravaged but beautiful countryside of Hope County, many of the citizens simply attempt to scavenge and survive. A group of savvy survivors have built up a small base known as Prosperity, where you begin your journey. The citizens of Prosperity (and the whole of Hope County) find themselves constantly under attack by the Highwaymen, led by twin sisters Mickey and Lou. Donning motocross gear with a constant flare of the color pink, the twins get their kicks by torturing and displaying prisoners, converting captives into bloodthirsty mercenaries, and mutilating animals. The Highwaymen are a vicious collection of women and men, but besides being completely rude about the whole apocalypse situation, they lack any narrative motivation. Unlike Far Cry 5‘s lunatic leader Joseph Seed and his world-ending religious evangelism, Mickey and Lou don’t have a cause they’re trying to fight for. In some ways, this makes them even scarier than other villains; they’re mostly in it for the fun of things. Unfortunately, that doesn’t make for great antagonism, which weakens the weight of the narrative. 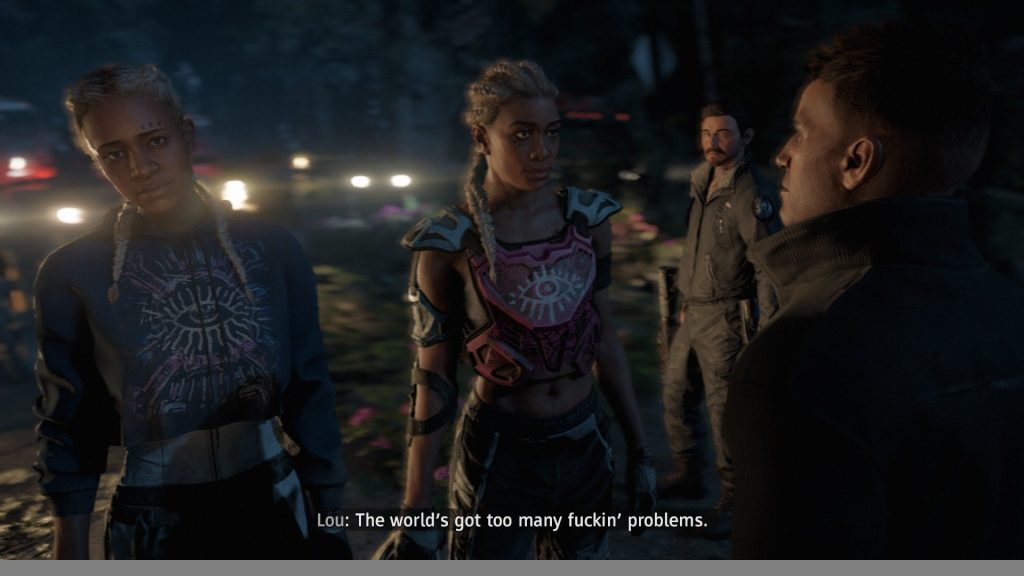 Your main focus throughout Far Cry New Dawn‘s campaign is capturing Highwaymen-claimed outposts and recruiting specialists to join your crew. The survivor base of Prosperity serves as more than a place to lay your head; it’s also a main hub for upgrading your gear, crafting new equipment, and embarking on expeditions. As you explore Hope County, completing missions and uncovering hidden treasure caches, you’ll gain resource materials. These materials can be used to craft new items, as well as upgrade various aspects of your base. Precious ethanol is used to improve the various parts of Prosperity, including your weapons and vehicle crafting, fast travel capabilities, and resource caches. More common resources like duct tape, gears, and wiring can be used to craft anything from pistols to dynamite. There’s also a hunting and fishing element to the game, which feels very similar to the offerings in Far Cry 5. 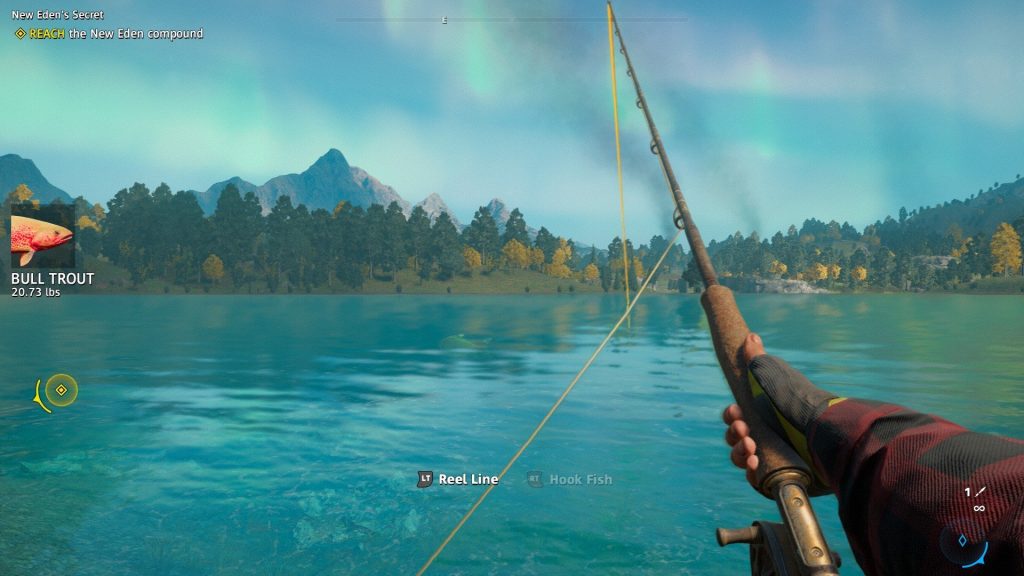 The Guns for Hire system returns, which lets you choose a recruited character to tag along on your adventures. It’s usually beneficial to have an NPC with you, as they can revive you during battles and provide additional firepower. The roster of characters contains both new and returning characters from Far Cry 5, and range from an elderly sniper to an adorable dog. Each character has different strengths and abilities, so some companions are better suited for certain situations. The dog Timber can sniff out resources, but the sniper Nana is excellent for stealth and lethality. As an added bonus, companions unlock new skills as they gain more kills, giving you more incentive to pick a few favorites. Recruiting characters is as simple as discovering them on the map and completing an ensuing side mission. It’s always fun to unlock a new companion and take them out on a mission, watching how they interact and assist the Captain. 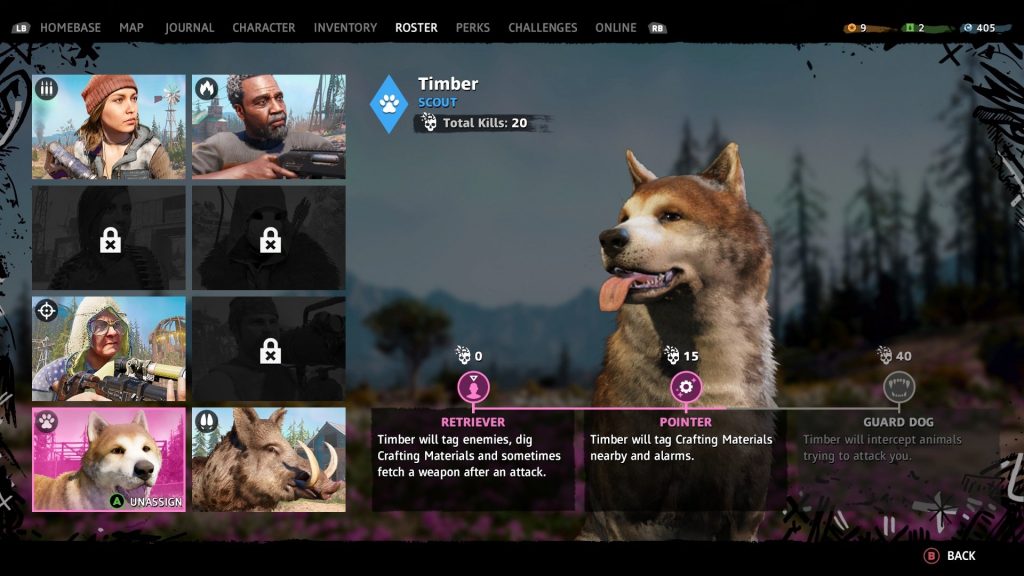 For the most part, gameplay in Far Cry New Dawn stays relatively unchanged from Far Cry 5. It’s a first person shooter crossed with open world exploration, where eliminating enemies is just as common as looting new locations. There’s a list of challenges to complete, ranging from things like weapon kills to specific animal hunts. Completing challenges and other objectives nets you perk points, which can be spent on new skills and abilities. Some skills improve your ammo count, sprint time, and explosives effectiveness. Other more wacky abilities allow you to gain an additional jump, as well as a few other reality-bending maneuvers. Gunplay feels tight and responsive, and it’s consistently fun to hunt down enemies using both stealth and reckless abandon. As you become more powerful and gain dexterity, you can even link together stealth kills, feeling more like a character from Assassin’s Creed than Far Cry.

While a lot of the gameplay in Far Cry New Dawn is similar to Far Cry 5, there are some new additions and features. Specifically, New Dawn brings more focus to liberating outposts and collecting resources by adding in both Expeditions and the option to repeat outposts. Expeditions are self-contained missions that take place on unique maps, separated from the normal game world. Your main goal is to steal a package (denoted by a pink smoke flare) from a Highwaymen stronghold, and then quickly make your way to a helicopter extraction point. It’s a straightforward concept, but the interesting locations and repeatable nature of these missions make them fun. Once you’ve completed an Expedition, you can play it on higher difficulties for bigger rewards. 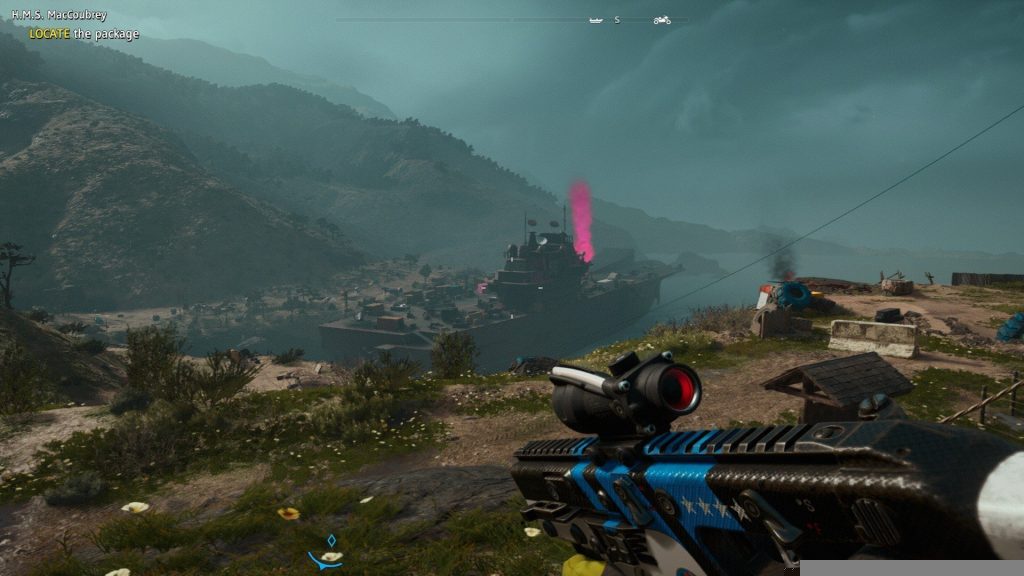 Liberating outposts in the open world works similarly to Expeditions, in that you can repeat them on higher difficulties. In Far Cry 5, liberating an outpost from the enemy turned it into a forwarding base, when you could restock and check in with some of your crew. In New Dawn, things function mostly the same. However, you can now choose to “scavenge” a liberated outpost, turning it back over into the hands of the enemy. This gives you some resources, and also increases the difficulty of the outpost. When you reclaim it the second time, even greater rewards await. You can scavenge an outpost several times, and with 30 unique outposts to liberate, there’s no shortage of variety in locations. There are plenty of weapons and vehicles to craft, so there’s always a need for more resources. This makes Far Cry New Dawn much more replayable and feel less grindy than its predecessors, and I was very impressed with the gameplay loop that scavenging encourages.

Visually, Far Cry New Dawn is a mixed bag. The post nuclear fallout world of Hope County is visually appealing, but can feel slightly barren at times. Depending on your console or computer of choice, the technical performance will vary, but Far Cry New Dawn looks pretty good all told. Character models and texture work is serviceable, and animation remains fluid. Environments are a glossy collection of ruined buildings and vast farm fields, overgrown and lush with nature. Exploring Hope County during the day is always bright and vivid, producing picturesque vistas (that can be appropriately framed using the game’s photo mode).

At night, the colors are far more muted and muddy, which can be underwhelming at times. I also encountered some sort of film grain filter that popped up at night, specifically when I was being shot at or in danger. The filter looks terrible and washes out all the already muddy colors, so much so that I originally though it was an issue with my setup. It’s not super prevalent, but annoying when it pops up (which seems random as well). New Dawn‘s overall graphical quality is generally good, but there are a few issues that keep it from being great. There’s a decent amount of texture pop-in and things can get occasionally blurry as a result, but the visuals are sharp and clean when in proper focus. 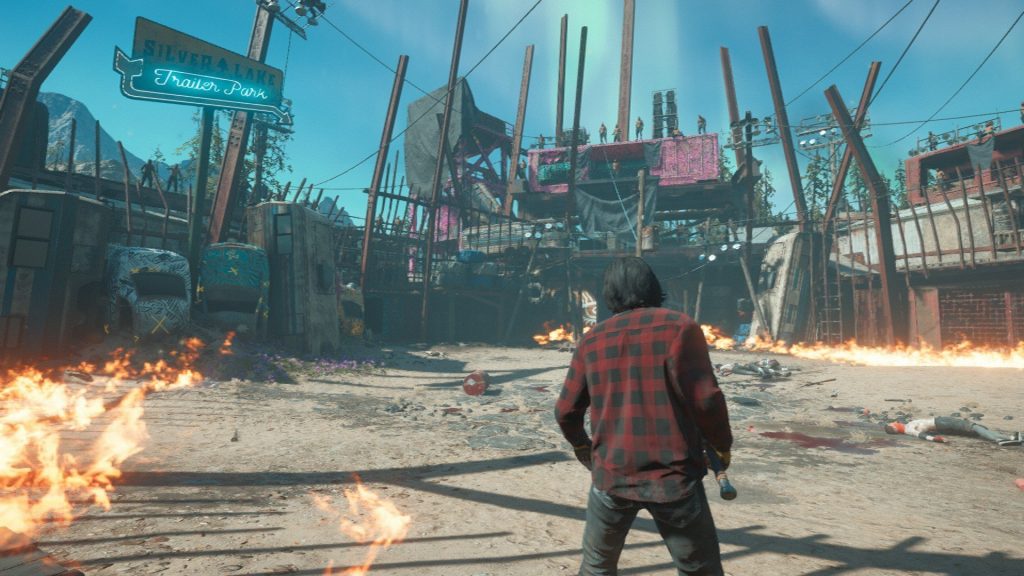 New Dawn stands out the most in its aesthetic and color choice. The Far Cry franchise is usually a colorful one, but New Dawn amps up the use of bright and vibrant colors. Specifically pinks, purples, and blues. In many ways, the color pink becomes a landmark for points of interest while playing; as the color usually signifies the presence of the Highwaymen. At times, it feels a bit out of place in the world, but it always vibes with the game’s tone. These bright colors both blend and clash with the greens of blossoming nature, which makes up the majority of New Dawn‘s map. The pink-punk aesthetic might grow repetitive after a while, but it does a good job giving New Dawn a visual identity.

Far Cry New Dawn is a more compact version of Far Cry 5, but it brings some fresh ideas of its own. Like other Far Cry spin-offs, New Dawn can feel slightly hollow. Luckily, the new Expeditions and scavenging mechanic keep gameplay refreshing for at least a dozen hours. While story missions are enjoyable, the narrative itself is inconsistent. Visually, New Dawn is both a neon feast and an inconsistent blur, teetering between photo realism and immersion breaking aesthetic. The Far Cry formula remains enjoyable for me, but if you’re starting to feel Far Cry franchise fatigue, New Dawn isn’t going to fix any of that.

It’s more of the same (which isn’t a bad thing), with a slightly new style and augmented loot system. It lacks a lot of the variety and gameplay depth that Far Cry 5 offered, and strips away things like Arcade Mode. Cooperative play seems to be more like an afterthought than an integration, which is disappointing. However, Far Cry New Dawn still remains fun and enjoyable despite its flaws. It also packs a decent amount of content for its mid-tier price, giving it the value factor as well. For those looking for an open-world shooter that’s equal parts goofy and realistic, Far Cry New Dawn sure fits the bill.