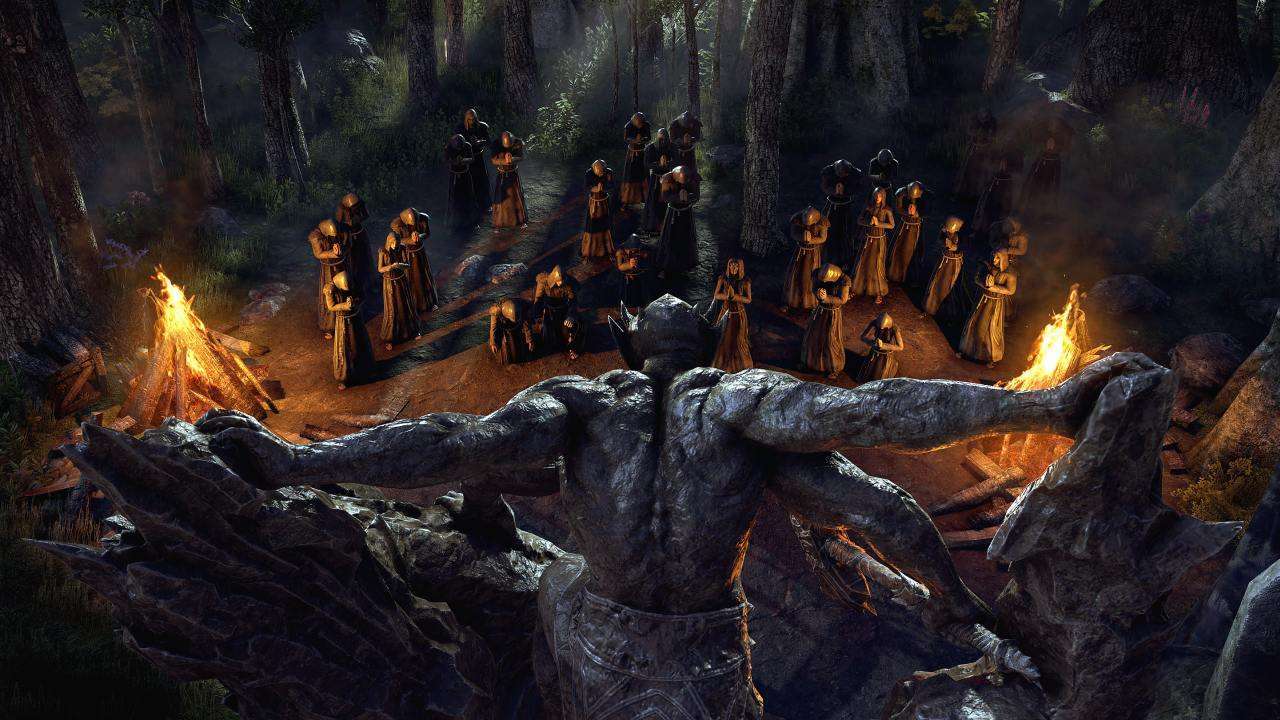 The Elder Scrolls Online: Blackwood is the latest expansion for Zenimax’s popular MMORPG based on the much-beloved Elder Scrolls franchise. This expansion takes players to the hilly zone of Blackwood, where they must uncover a long-lost secret involving cultists, high-ranking Council officials, and the Daedric Prince of Destruction, Mehrune’s Dagon. With a big emphasis on shadowy cultists and the fiery planes of pain known as the Deadlands, Blackwood recalls many elements of the fan-favorite Elder Scrolls IV: Oblivion. For those who enjoyed Oblivion back in 2006, Blackwood will provide many moments of nostalgia, but does it manage to succeed beyond the fan service? The past few ESO expansions have been inconsistent in their quality, ranging from excellent to underwhelming. Let’s see if The Elder Scrolls Online: Blackwood is worth your time, or if it’s just a grab at mid-2000s nostalgia.

The Mystery of Blackwood

The main quest in this expansion sends your hero to the southeastern region of Blackwood, where the rolling hills and murky rivers are wild with bandits, bog dogs, and the occasional demon. Here, in the Imperial-controlled cities like Leyawin and Gideon, government officials known as the Elder Council are being murdered at a rapid rate. Along with your old friend Eveli Sharp-Arrow, you set out to investigate the spree of killings and the rumors of cult activities in the area. The unfolding mystery centers around Daedric artifacts, a mysterious “secret” held by members of the Elder Council, and a shadowy assassin. As you gather more information about the killer, you ping-pong across Blackwood, uncovering clues and hunting down leads.

While the focal mystery of Blackwood‘s main questline is intriguing and well-written, there’s far too much downtime. Many quests, including some side quests, have you spending most of your time talking with various NPCs. You’ll pick up a quest in a main town and chat with an ally there, run to a location somewhere on the map and have another chat, then run back to the starting location to chat some more. Especially during the first few main quests, dialogue can become a slog, where you’ll spend a big chunk of time yammering with NPCs instead of engaging in combat.

Despite this early slump, the main quest in Blackwood eventually ramps up, culminating in an awesome final fight. I had a pretty good time uncovering the mystery of Blackwood with friends, but couldn’t help but feel bored from time to time. The sluggish pacing reflects poorly on the otherwise engaging mystery, but it doesn’t complete spoil the fun. If you’re a big fan of The Elder Scrolls IV: Oblivion, you’ll also enjoy the various winks and nods throughout the overarching story. However, if you’re simply interested in slaying beasts and gaining experience, Blackwood takes a while to get going.

Like in The Elder Scrolls IV: Oblivion, Blackwood also has you delving into the lava-filled, hellish Deadlands, where monstrous beasts roam wild. As you explore the main Blackwood zone, you’ll encounter Oblivion portals that transport you to world events in the Deadlands, where you must fight through a series of enemy encounters before battling a huge boss. Even with a powerful character, the Deadlands can be challenging, as enemies hit hard and knock you around with ease. The bosses are tanky and intimidating, especially the final boss of the gauntlet, which requires dozens of allies to take down.

The burning planes of the Deadlands offer some much-needed visual contrast from the muted countryside of Blackwood, with blazing spectacle and cool creature designs. The world events are fun and chaotic, packing a lot of combat into a brief period. However, the lack of variety between different world events can cause them to quickly grow repetitive.

There are three different starting areas to explore in the Deadlands world-events, all of which lead to the shared final boss confrontation, but they all feel pretty similar. There’s a bit more exploration than in other world events, but the Deadlands are still very linear. You’ll also explore the Deadlands in a few self-contained quest segments, but the majority of your time in this DLC will be spent in the main Blackwood zone.

Each major expansion for The Elder Scrolls Online usually introduces a new gameplay mechanic. In Greymoor, it was excavating antiquities. Elsweyr added the Necromancer character class. Now, in Blackwood, players can now recruit their own sidekick through the new companion system. There are two companions tucked away in the Blackwood zone, and after completing their personal quest, they will join your party for more adventures.

Once you find and unlock a companion, they get added to your inventory as a token. At any time, you can activate this token in your quick-item menu and the companion will appear. You can only have one companion active at a time, so you’ll have to pick your favorite when questing. In addition to providing moral support, companions can also help out in battle, earning experience just like you. Your companion can level up and unlock new skills, which can be assigned to their five-slot ability bar. As you complete tasks and make moral decisions, your companions will react, strengthening or weakening your partnership.

In this way, companions feel true to their name, acting as memorable sidekicks to enjoy the journey with. The two companions in Blackwood have distinct personalities and combat abilities, giving you enough reason to swap between them frequently. They’re also notably helpful during tough dungeons and boss fights, holding their own in battle. Overall, the companion system is a great addition to the game, providing yet another set of skills to experiment with and upgrade.

The Bottom Line on The Elder Scrolls Online: Blackwood

Blackwood is an enjoyable expansion to The Elder Scrolls Online, but the pacing can be brutal at times. When compared to previous expansions, Blackwood is a bit better than Greymoor, but it doesn’t feel as wondrous or exciting as past efforts like Elsweyr. That said, there are still some really fun battles, interesting quests, and a surprisingly well-written story. The companion system is also satisfying and entertaining, adding two memorable characters that are worth keeping around.

If you’re someone who has played The Elder Scrolls Online for a while and enjoy the general gameplay loop, Blackwood is a worthwhile expansion. It may not be the best of the bunch, but it adds enough content to keep the level-grinding enjoyable. If you have any nostalgia for The Elder Scrolls IV: Oblivion, that will probably help too. Unfortunately, if you weren’t interested in The Elder Scrolls Online before, Blackwood isn’t going to change that. It doesn’t make any radical changes that drastically affect the gameplay, ultimately providing more of the same. All things considered, Blackwood is a commendable expansion, but inconsistent pacing weighs the experience down.