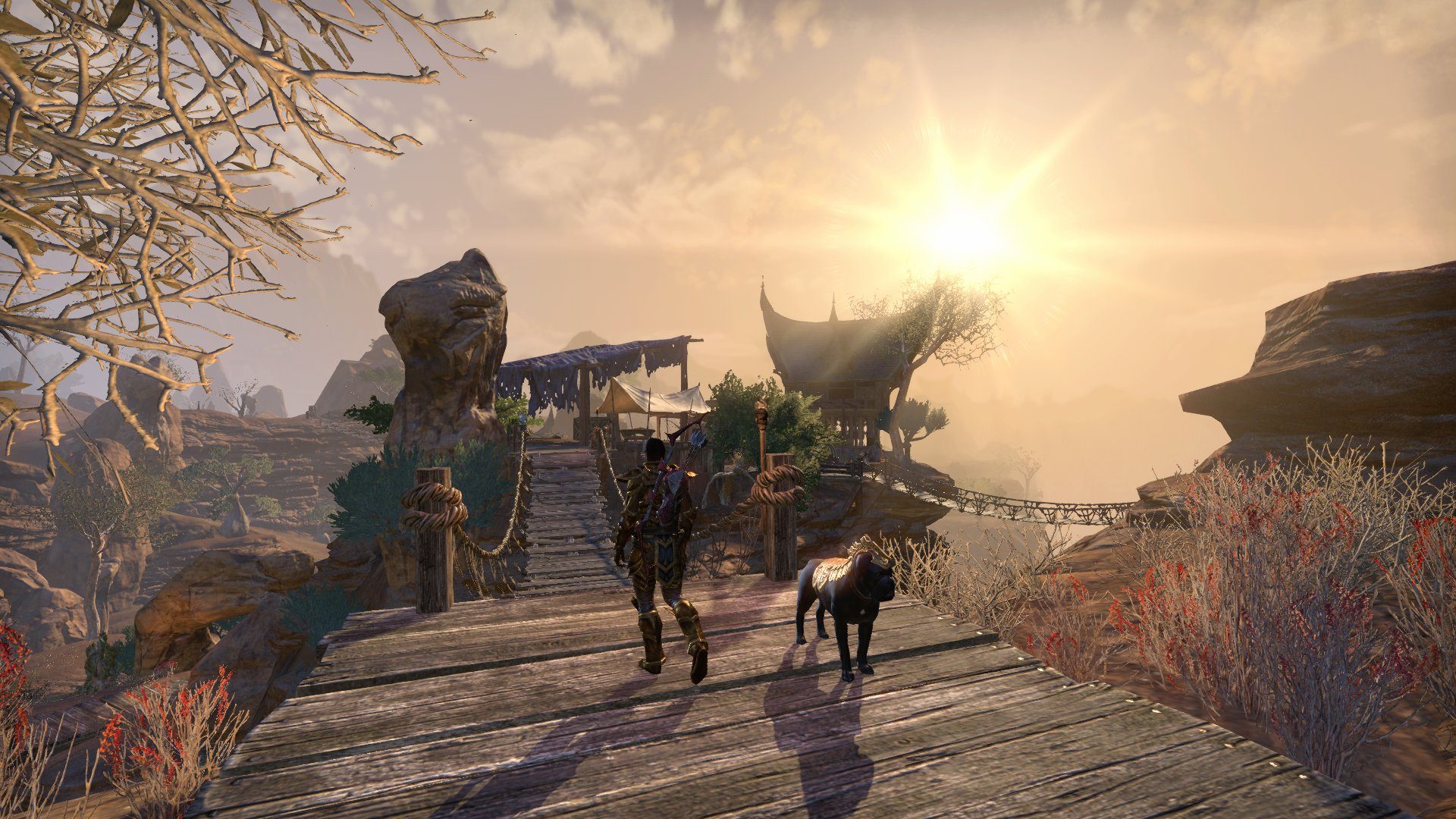 The Elder Scrolls Online: Elsweyr is the brand new expansion for the hit MMORPG based on Bethesda’s massively popular fantasy franchise. Players from far and wide will once again gather in the lands of Tamriel for a brand new adventure, this time set in the homeland of the feline race known as the Khajiit. With dragons on the loose and a corrupt ruler in charge, the land of Elsweyr is in desperate need of a savior. There are quests aplenty and giant dragons to fight in Elsweyr, but is it a worthwhile expansion to invest your time into?

The Elsweyr expansion continues Elder Scrolls Online‘s “Season of the Dragon”, the current narrative thread that has been unraveling for the past few months via new dungeon DLC and free preview quests. Elsweyr‘s story takes players to the southern portion of Tamriel, slightly eastward from the Aldmeri Dominion region. Here, in the hot and arid desert, the cat-species known as the Khajiit exist under the tyrannical rule of Queen Euraxia. Her legion of loyal soldiers enforce her wicked rule of the feline inhabitants, extorting them for coin and oppressing their existence. When dragons return to Tamriel and start wreaking havoc in Elsweyr, the problems become too large for the citizens to handle.

Elsweyr‘s main quest is satisfying in several ways, and much like the last major expansion Summerset, it delves further into the interesting lore presented in the main quest of the vanilla game. You’ll meet characters new and old, embarking on an adventure full of mystery and intrigue. The land of Elsweyr is home to tons of new enemies and allies, and experiencing their stories is a continuously satisfying experience. Occasional fetch quests can cause some pacing issues, but for the most part, both the main and side narrative content is well written and interesting.

Separate from the narrative quality of the quest design and writing, I ran into some technical issues that marred the main quest line. I experienced a few bugs while playing through the quest with a group, but these problems could be attributed to launch window woes and excessive server loads. Regardless, some of the quest glitches we encountered required restarting the quest to fix, which can be quite disheartening. These annoyances, along with various frame rate and loading issues, had a habit of weakening the entertainment factor. These problems may or may not happen for you, depending on the hardware and platform you play Elsweyr on.

How to Slay a Dragon

Although Elsweyr is packed with characters and quests, one new additional activity really ramps up the chaos; dragon hunting. Now that dragons have been unleashed on the land of Elsweyr, every player who inhabits the zone will eventually go toe-to-toe with one. At any given time, a couple dragons may occupy the zone, visible on the world map. You can take an active role in seeking out these mega-powerful creatures, or do your best to avoid them. Either way you cut it, you’ll do battle with these giant beasts.

Taking on a dragon is no small feat, and will require a small battalion of active players if you actually want to do some damage. These humongous fire breathers can easily wipe out dozens of players with a single attack, regardless of skill or character level. Impromptu dragon fights usually see characters rushing by on their mounts, and it truly feels like a zone-wide organic event. That said, the number of characters and actions on screen can cause the game to get very choppy. Dragon fights are exciting and engaging, but the technical issues are incredibly notable especially on a packed server.

Elsweyr includes a few notable additions to Elder Scrolls Online, apart from the new zone, enemies, and quests. Players can now control a Necromancer, a highly requested character class that fans have been pleading for. The necromancer wields magic in some really cool ways, opening up some exciting combat possibilities. The necromancer is a flexible class as well, offering offensive, defensive, and support skill lines.

While I won’t go into the specifics of each ability and skill line, I can say that the Necromancer has some pretty overpowered abilities. In a combat role, the Necromancer can quickly overwhelm enemies with summoned skeletons and spectral projectiles. Certain abilities can be morphed to provide sustainability as well, granting you health on-hit and other boosts. The Necromancer also excels in player-versus-player modes, especially as a healer. Anywhere that corpses can be found, Necromancers will be able to turn the tide of battle. Keep in mind that most cities frown upon necromancy though, so you’ll want to keep your powers under wraps while visiting towns.

Apart from the dragon attacks and the incredibly fatal wildlife, the zone of Northern Elsweyr is a treat to explore. Despite the stark desert weather that keeps things hot and dry, there are some truly lush and magnificent places to investigate. Colossal structures and monuments often loom on the horizon, their massive scale counteracted by deep canyons that split the landmass. There are numerous towns and outposts to discover, scattered in the mountains, plateaus, and ancient temples.

As with most Elder Scrolls Online expansions, the best quests in Elsweyr can be found in the various side stories throughout the world. You’ll execute a stealthy heist, investigate ancient mysteries and organizations, and even help some traveling salesmen. You’ll encounter some of these stories while following the main quest line, but others need to be found through careful exploration. Overall, the zone of Northern Elsweyr is packed with content to keep you busy. Anyone trying to see everything that Elsweyr has to offer should expect dozens of hours of play time.

The Bottom Line on The Elder Scrolls Online: Elsweyr

Elsweyr is by far the most ambitious Elder Scrolls Online expansion, but it doesn’t always hit the mark. The dragon fights are fun and hectic, but marred by technical issues. The main quest is well-written and engaging, but long load times and quest bugs can cause an abrupt halt in the fun. Necromancy provides some cool new class options and powerful PvP opportunities, and is a stand out addition to character creation. The Northern Elsweyr zone itself is also well crafted, with only an occasional frustration in exploration.

Overall, Elsweyr is a great expansion for the Elder Scrolls Online, as it’s packed with enough content to please all sorts of players. Whether you like to quest as a lone wolf or join large groups for trials and battles, Elsweyr has something new to see. The zone is beautiful to behold and exciting to explore, and the stories you’ll uncover are interesting and varied. While I prefer the more mystical themes of the previous expansions Summerset and Morrowind, Elsweyr ends up being well worth the time investment. Whether you’re a new player or a returning veteran, The Elder Scrolls Online: Elsweyr is more than enough of a reason to hop into the online world of Tamriel.